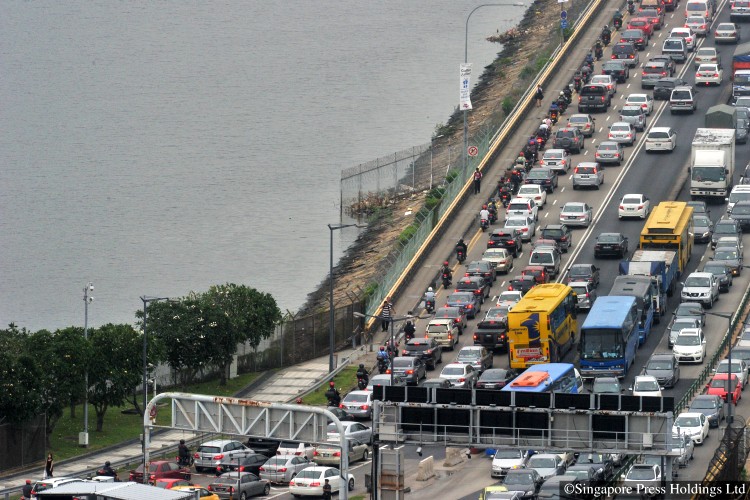 The validity period of VEPs (vehicle entry permits) for Malaysian-registered vehicles will be further extended until the end of September, the Land Transport Authority (LTA) said yesterday.

This adds another three months to the initial extension to June 30.

The move was first announced for the benefit of Malaysian workers who had chosen to remain in Singapore after the movement control order across the Causeway was announced in a bid to contain the COVID-19 outbreak.

The LTA said the extension will be automatically applied.

Foreign vehicles in Singapore would usually be required to have time-limited VEPs. They would also have to pay daily fees, but that was waived for Malaysian vehicles from March 18 to April 14.

In a Facebook post, Transport Minister Khaw Boon Wan said the further automatic extension of VEP was in response to Malaysia extending its recovery movement control order (RMCO) to end-August.

“This avoids the Malaysian motorists crowding into LTA office to extend their VEPs,” he added.

“Many Malaysian motorists have decided to send their vehicles home to save on VEP fees. This is the sensible thing to do.”

Malaysians are still barred from travelling overseas during the RMCO period from June 10 to Aug 31. This means that if a Malaysian worker in Singapore chooses to return home now, he risks being unable to exit Malaysia for more than two months.

National Development Minister Lawrence Wong said on Tuesday that the Singapore authorities are still working out the details with their Malaysian counterparts on how travel between both countries can be safely resumed.

The LTA said VEP fees incurred before March 18 and after April 14 will continue to apply.

It suggested that motorists who wish to avoid accumulating VEP fees and who are unable to personally drive their vehicles out of Singapore may engage cross-border towing or transport services to transport their vehicles back to Malaysia.

Those who choose to continue staying in Singapore are reminded to update their Malaysia road tax and vehicle insurance validity dates on the LTA’s OneMotoring website.