The Volkswagen ID.3 is the company's most important car ever | Torque
Loading posts...
0 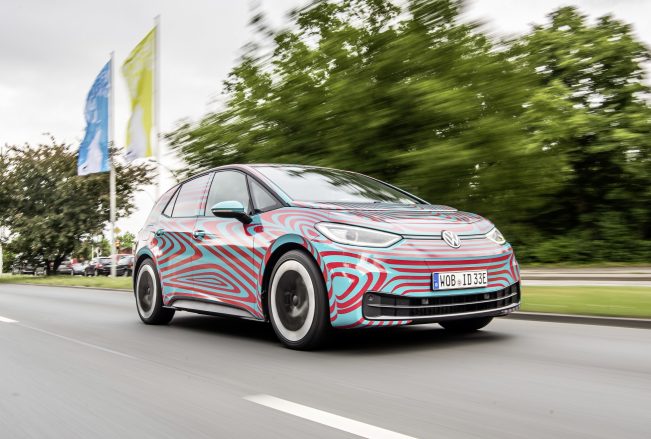 The VW ID.3 with camouflage wrapping, slated for unveiling at the Frankfurt Motor Show on Sept 10.

For Volkswagen, its all-new ID.3 electric car is in some ways its most important model yet.

The company considers the car so crucial in the next phase of its history that the ID.3’s name itself carries the clue.

The “3” in ID.3 refers to the third “major chapter” in Volkswagen’s history, which the ID.3 represents the start of.

The ID.3 is based on VW’s new modular electric drive matrix (MEB), which has been specifically designed for electric drive use and the largest possible vehicle interior.

Back in mid-May this year, Volkswagen said it took “successful” pre-bookings for the ID.3 1st Edition, which is a special edition limited to just 30,000 vehicles.

According to VW, range of between 330 and 550km (per WLTP testing standards) is possible depending on the battery selection.

For the forthcoming ID range of electric cars, VW guarantees their batteries for eight years or 160,000km.

When will it be available?

Of course when (or if) they arrive in Singapore, the ID.3 will be substantially more expensive due to import duties, local taxes and Certificate of Entitlement (COE).

However, the low price shows that they could be quite affordable to local buyers.

VW says that its first all-electric vehicle will be “carbon-neutral” over its service life if buyers “consistently charge their vehicles” using renewable energy.

And that’s not all. VW promises that there will be “no shortage of driving pleasure”.

“Putting your foot down on the ID.3 will see you accelerate rapidly”, VW says, which it attributes to the ID.3’s rear-wheel drive and 200hp performance.

VW says production is due to begin at the end of 2019 with deliveries of the first vehicles by mid-2020.

The car will be revealed at the Frankfurt Motor Show, held from Sept 10 to 22.

Electric cars top speed: Are they slower than normal cars?