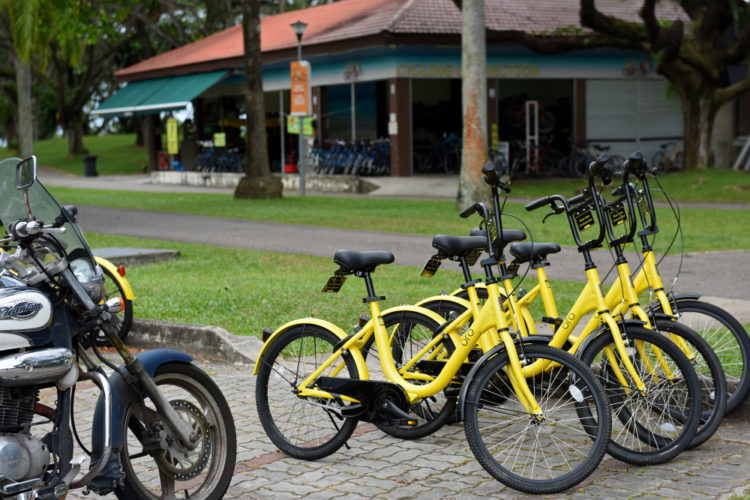 Ofo’s yellow bicycles parked illegally in motorcycle parking spaces in Pasir Ris Park, a short distance from a bicycle rental stand. Bike rental companies, which must win a public tender to operate in public parks, are crying foul over ofo’s business practices that have already hurt their takings.

A bicycle-sharing company from China has provoked the ire of its Singapore counterparts, which are crying foul.

Ofo, headquartered in Beijing, is conducting business at some public parks without having to pay rent for using the public space.

Its charge of 50 cents a trip is a cutthroat price that makes Singapore bike rental businesses see red, as they typically charge about $7 to $8 for an hour of use.

“It’s unfair because they are using public facilities for profit and they don’t have to pay rent,” said Mr Adrian Koh, manager of Coastline Leisure, which operates in Pasir Ris Park and East Coast Park.

Businesses like Mr Koh’s have to win a public tender to operate in public parks. They can sell drinks and snacks and rent out bikes from small sheds.

Coastline rents out bikes from $7 an hour. It says business at Pasir Ris Park has gone down by 30 to 50 percent since bike-share companies like ofo appeared.

Ofo’s presence and the disquiet it has created is akin to how Uber disrupted the taxi business, causing cabbies’ earnings to drop.

The newcomer also operates in other areas, such as West Coast Park.

NParks told The Straits Times it is aware only that ofo’s bicycles are parked at West Coast Park. It did not say whether it would take action.

Its group director for parks, Mr Chia Seng Jiang, added: “We’d like to take this opportunity to remind park users of these bicycles to park at designated bicycle bays, as the other spaces are meant for other uses.”

Ofo, which began operations three weeks ago, told The Straits Times two weeks ago it has put out about 1000 bikes for rent.

Many are placed in public parks and at MRT stations.

When asked why its bikes were parked illegally, its spokesman said they were placed there after being unloaded and would be moved to public bicycle racks in the park “as soon as possible”.

On Friday night, the bikes were no longer parked in the motorcycle spaces.

Ofo’s low fee was welcomed by Singaporeans interviewed. Auditor and Pasir Ris resident Willy Lim, 30, said: “It’s so cheap and I can use it for as long as I want. Opting for it is a no-brainer.”

Renting an ofo bike is also convenient as users do not have to return the machines at fixed stations – a standard feature of bike-share schemes worldwide.

They unlock the bikes with their smartphones and can return them at any place where bicycles can be parked.

This novel approach has been adopted by local firm Obike, which began operating last month. Its bikes are found mostly at MRT stations.

Experts have raised the concern that both companies, which have rapid expansion plans, could lead to bicycles being parked indiscriminately.

But the authorities are adopting a wait-and-see approach.

SIM University transport expert Park Byung Joon said: “This reminds me of the early days of Uber, which came in and exploited the regulatory grey area.”

The Land Transport Authority (LTA) said the two companies could “serve as a catalyst to promote greater take-up of cycling” and that it would continue to monitor and engage them as their services are “still evolving”.

It added that bikes can be removed if they obstruct people or are indiscriminately parked, noting: “We’re monitoring the situation closely to assess if further measures need to be taken.”