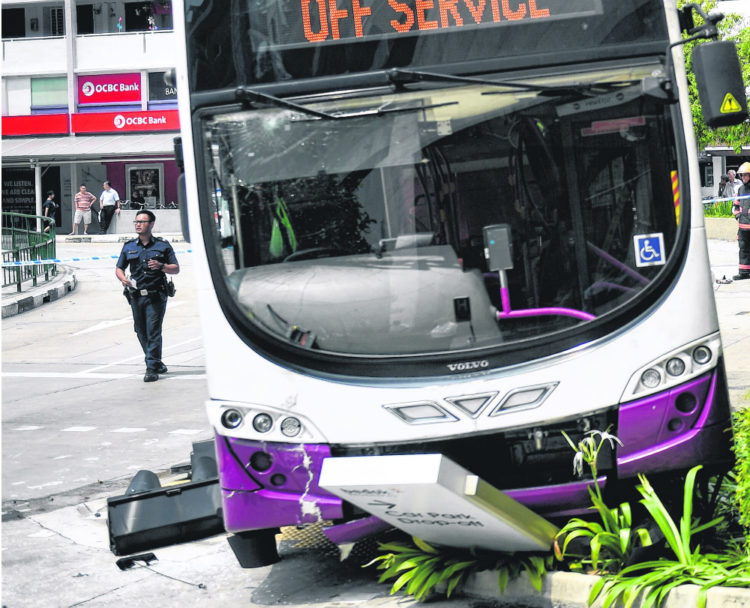 A woman had to be rescued from under a bus and three others were injured after an SBS Transit double-decker crashed into a pedestrian walkway in Bedok yesterday.

The Singapore Civil Defence Force (SCDF) was alerted to the accident outside Bedok Residences in Bedok North Drive at about 1.30pm.

On reaching the scene at 2.20pm, The Straits Times saw that the bus had crashed into a signboard and a traffic light was damaged. Parts of the bus’ front bumper had fallen off, seemingly from the impact.

The road was cordoned off and traffic was not allowed to pass. At least 20 passers-by from the nearby coffee shops had gathered to watch the commotion.

An SCDF spokesman said the woman who was trapped had to be rescued by officers using lifting equipment.

In all, four people – a 38-year-old man and three women, aged 33, 37 and 55 – were taken conscious to Changi General Hospital with non-life-threatening injuries.

The Straits Times understands that all four were pedestrians and had been standing at the traffic light when they were hit.

Ms Tammy Tan, SBS Transit’s senior vice-president of corporate communications, told The Straits Times that the bus operator was “very sorry that this has happened”.

She added that SBS Transit’s priority “is the well-being of the injured pedestrians”.

SBS Transit sent a team to the hospital and was trying to get in touch with those injured in order to extend support to them, she said.

“Meanwhile, we are assisting the police in their investigations. We would also like to apologise to affected commuters and motorists for the inconvenience caused.”