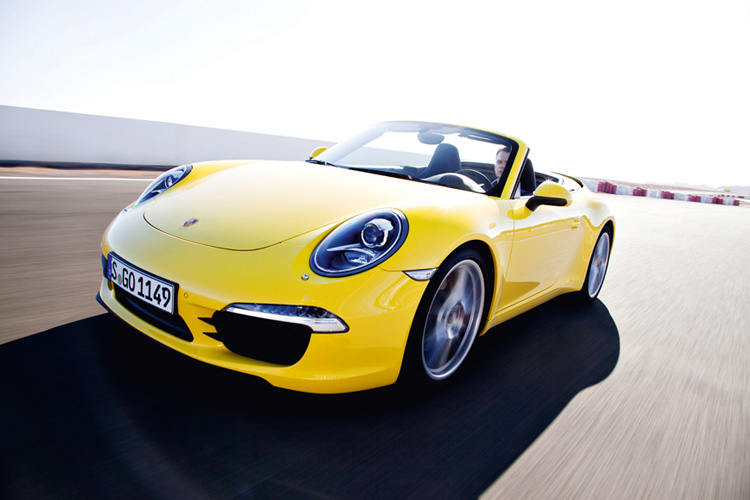 The alfresco edition of the seventh-generation Porsche 911 is prettier, more refined, more comfortable and faster yet more frugal than its already excellent predecessor. Not that you’d realise it’s an all-new model at first glance.

As with the 911 coupe, the visual changes are very subtle. You’ll have to look hard to spot the longer wheelbase, wider front track and the fact that the wing mirrors are now mounted on the door rather than the leading edge of the side window. The newness is a bit more noticeable from the rear – those sexy, slimline tail-lights give the new model real presence.

But something else is different as well. It takes a while to register, however – with its roof up, the new convertible faithfully replicates the unmistakable silhouette of the 911 coupe, something previous iterations of the 911 cabrio were never able to do. Credit goes to a brilliant new folding roof, the bulk of which comprises two large magnesium panels encased in fabric. 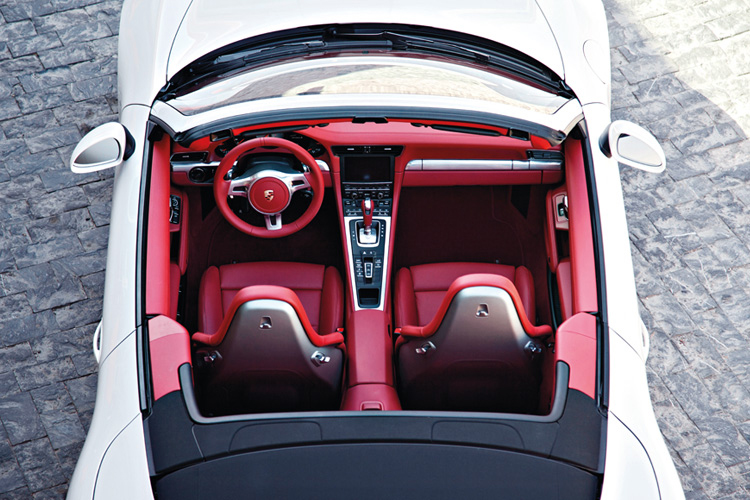 Improved ergonomics, better equipment and a little more room, but back seat is still cramped for two grown adults.

With these “panel bows” (as Porsche calls them) in place, the roof is as rigid and sturdy as a coupe’s. And because the panels are formed from sheet metal, it is possible to subtly curve them so they mimic the roofline of the 911 coupe perfectly. Apart from aesthetics, this also benefits aerodynamics – the cabrio boasts a 0.30 coefficient of drag (almost identical to the coupe’s 0.29).

Lowering the roof is a breeze – it takes an easy 13 seconds. Press a button and the rear deck cover opens, the two panel bows and the glass rear windscreen fold themselves over each other and drop into the space beneath, and the deck cover closes over them, although not fully – part of the topmost panel bow remains visible, peeking out from the gap between the cabin and the rear deck cover.

This is deliberate, to keep the rear deck low and avoid the humpbacked look that afflicts the cabrio versions of the 996 and, to a lesser extent, the 997. Top up or down, the 991 cabrio looks delectable. 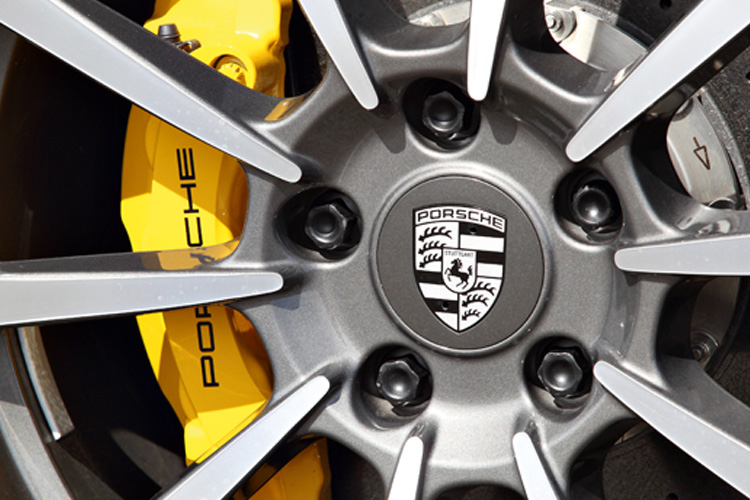 Carbon-ceramic brakes for the Porsche 911 Carrera S Cabriolet are an optional extra.

That rigid roof is an advantage in “closed” driving, where the cockpit feels every bit as insulated as the 911 coupe’s. Even at high speeds, there is no hint of the slight wind whistle that even the best soft-tops suffer from. Porsche claims that noise levels in both cars are comparable, and this is entirely believable.

Roof down, the cabin can still be kept largely draught-free by a clever new wind deflector. Unlike most vehicular windbreakers, which have to be manually assembled before you set off, the 911’s is electrically operated and can be deployed on the go, at up to 120km/h. It essentially comprises a U-shaped frame, connected to some mesh.

At rest, the frame sits around the edge of the rear cabin, when deployed it rises to a vertical position and extends the mesh over the rear cabin and upright behind the front seats. It is very effective indeed, making it possible for you to cruise at three-figure speeds without troubling your hairdo. 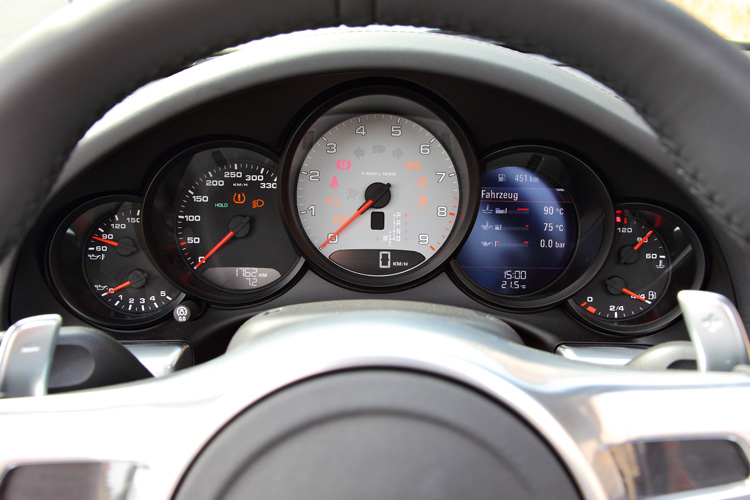 In other ways, too, this car is a convertible without compromises. The new 911 was designed from the outset to include an open-air variant, so the body remains very rigid even with the roof “chopped”. There’s no scuttle shake whatsoever, no creaks or rattles to betray the slightest bit of twist. No wonder – Porsche claims an 18 per cent increase in torsional rigidity.

That stiff bodyshell helps with chassis control, too. As with the coupe, ride comfort is superb for such a sporty car. It’s certainly firm, but stays sufficiently compliant – never harsh or jolting – even on really bad surfaces. The damping is ideal, keeping a tight rein on stray body movements yet with sufficient compliance to make it a realistic everyday ride.

You can stab a console button and firm up the dampers further. It reduces roll even more, but at the same time makes things a bit jigglier. Truth be told, the default setting is already so good and the car’s suspension so well-judged that you would need to be going ludicrously fast on public roads to really require that extra degree of control. 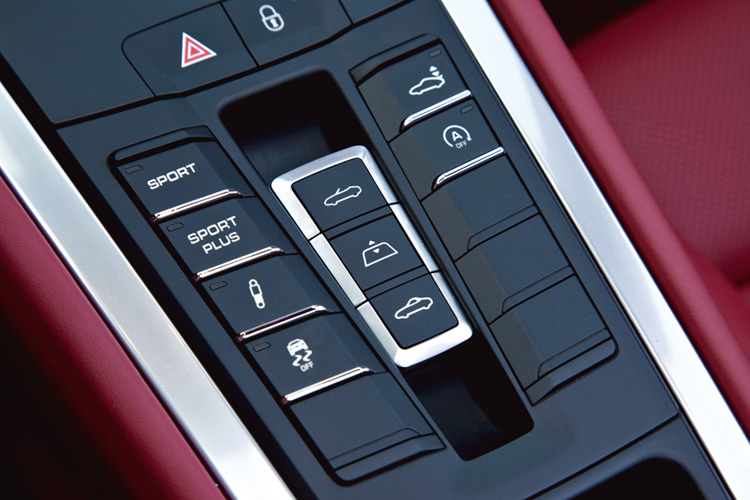 Switches that operate the hood in the 911 Cabrio work the sunroof in  the 911 Coupe.

The new 911 Cabriolet is a staggeringly able handler, as it showed us on the snaking mountain roads of Spain’s Gran Canaria where we sampled it at launch.

Response to steering input is super-sharp, while front-end grip is relentless and noticeably stronger than before. The car feels incredibly agile yet reassuringly planted, with very little of the quirky rear-end squat under acceleration the 911 has always been notorious for.

That steering, electrically assisted for the first time on a 911, is a great tool – well-weighted, quick-geared and very communicative, and without a trace of slack. It just lacks the sheer exuberant liveliness of the old car’s helm, but by any other standards it is terrific. 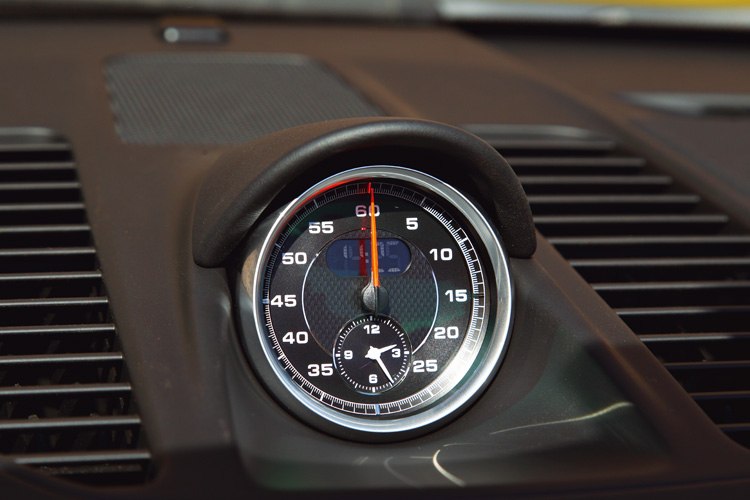 The worthy Sport Chrono option can also time the roof operation, which takes 13 seconds and can be engaged on the move at speeds of up to 50km/h.

A session on a nice little test track by the coast proved that the new car is as well-behaved at (and beyond) the limits as its on-road handling suggests. There is some understeer if you enter tight corners too fast, but you can really “lean on” the tarmac, feeding in the power quite liberally and getting the tail to edge out to balance things without fear of going too far.

Even with traction control switched off, the engine-laden back end never turns snappy. The car seems to just create immense lateral grip and traction from those rear tyres, delivering not just great cornering forces but also a paranormal ability to transmit all that power to the tarmac and turn it into forward propulsion. Maybe there’s something to be said for that rear-engined layout after all.

The brakes, too, are mighty – hauling the car down for hairpin bends time after time on that tight circuit, the pedal always remaining firm and reassuringly constant. 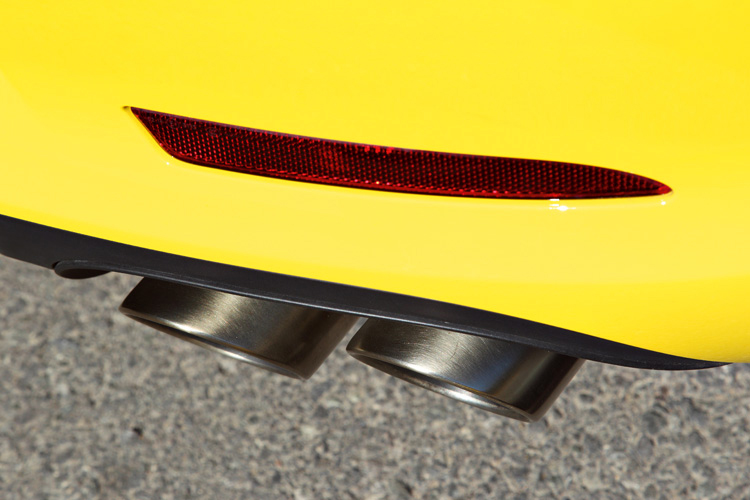 The exhaust tips of the 2012 Porsche 911 Carrera S Cabriolet.

At 3.8 litres, the engine in the new Carrera S is no bigger than the old one’s (in fact, the base Carrera’s engine is now smaller, at 3.4 litres instead of 3.6), but power and torque are up 15bhp and 20Nm respectively, making the newcomer marginally quicker than before. With the dual-clutch PDK gearbox, 100km/h is reached in just 4.5 seconds, and maximum speed is a tailwind away from 300km/h.

The machine sounds fantastic, of course, its flat-6 beat and distinctively guttural war cry at high revs all part of the 911 DNA. There’s ample low-end torque, but it’s even punchier at the top end, with real kick-in-the-ribs urge.

Engage Sport mode and the engine’s voice rises a few decibels at idle (and even more at full blast), and gearchanges are speeded up. With Sport Plus engaged (only available if you’ve got the optional Sport Chrono Package installed), things get even more extreme, the transmission happily delivering a pronounced kick on each upchange. 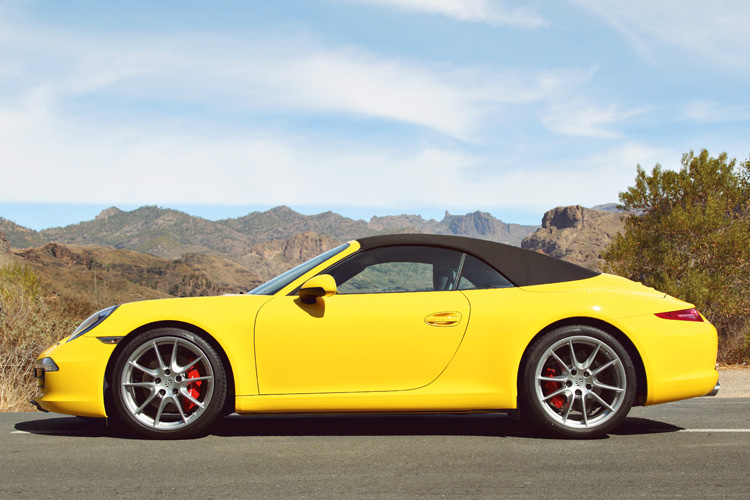 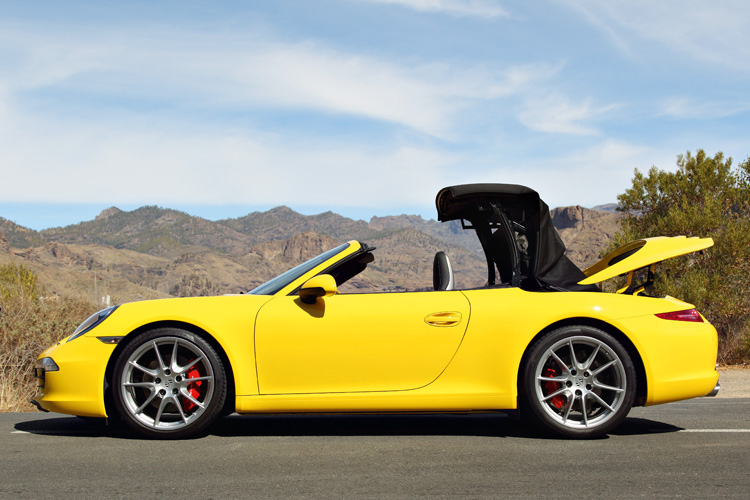 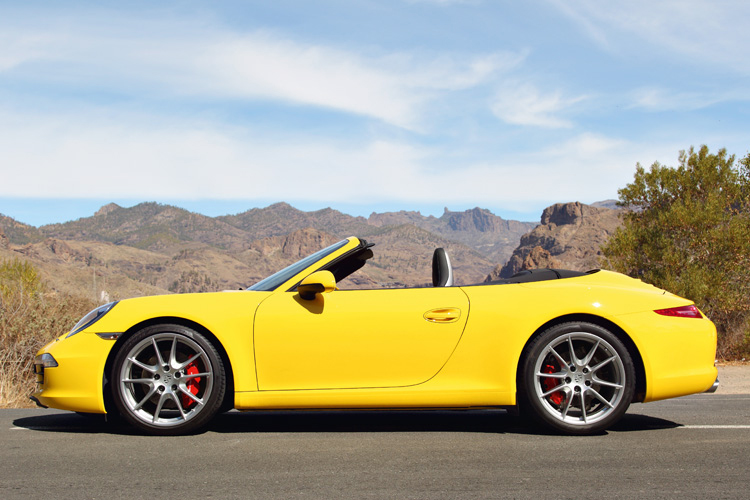 Impressively, consumption figures are also down, by between 10 and 15 per cent depending on the model. The combined consumption figure for the Carrera S Cabriolet is an impressive 11.2 kilometres per litre, for instance.

Credit goes to a variety of weight-saving measures (especially the brand-new bodyshell, which makes extensive use of aluminum), that cut the weight of the convertible by 45kg to 60kg (depending on the version and specification) over its predecessor, although it is still 70kg heavier than the equivalent 911 coupe. 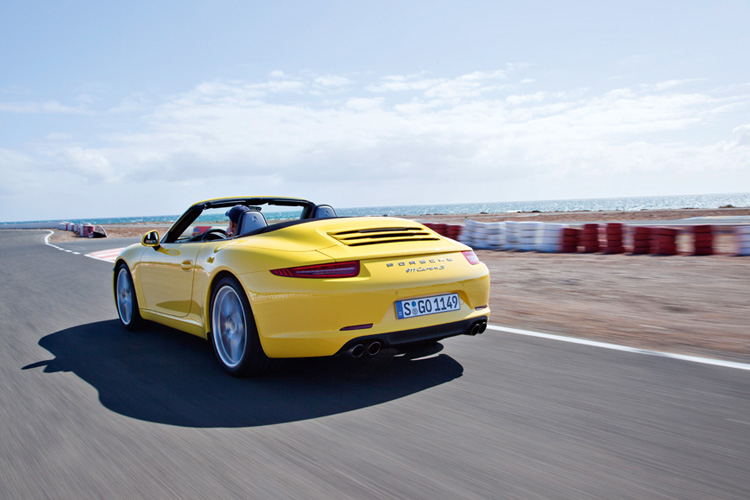 If specified with Sport Plus, the Carrera S cabrio PDK powers from zero to 100km/h in 4.3 seconds and hits 200km/h just 10 seconds later.

There are other fuel-saving measures, too, such as stop-start technology, electrical system recuperation, a “coasting” function (which shuts off the engine and allows the car to freewheel under certain no-load conditions) and the aforementioned electric power steering, which saps no power at all when the car is headed straight.

Very rarely does a vehicle appeal to both the heart and head to as great a degree as the new 911 Cabriolet does. It is a lovely thing to behold, delightful to drive, and oh-so-easy to live with. It really is the ideal everyday open-top sports car.