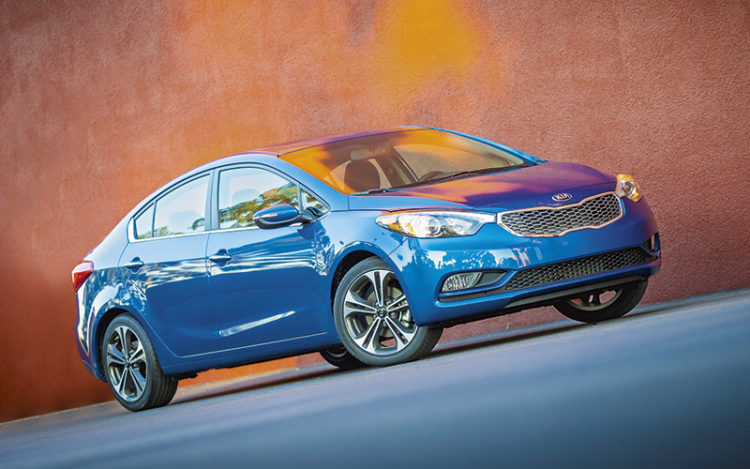 Peter Schreyer. The name is synonymous with Kia’s undeniably meteoric rise up the global car sales charts. And with his newest creation, the Kia Forte K3, he has another potential winner on his hands.

The German, Kia’s design chief since 2006, is single-handedly responsible for adding some much-needed verve to the Korean automaker’s cars. He made Kias desirable, and not just because they are attractively priced.

The Forte K3’s predecessor, the Cerato Forte, was one of Schreyer’s first projects after he joined Kia in 2006. The ex-Audi man was fully involved in this model, from the drawing board to final production.

It landed here in March 2009 and was discontinued last December, spawning a two-door coupe (the Koup) and a five-door hatchback during its production run. The Cerato Forte contributed significantly to Kia’s bumper year in 2009 – where the brand finished fourth on the sales charts – and just before high COE premiums pushed the price floor so high as to make budget cars unviable. 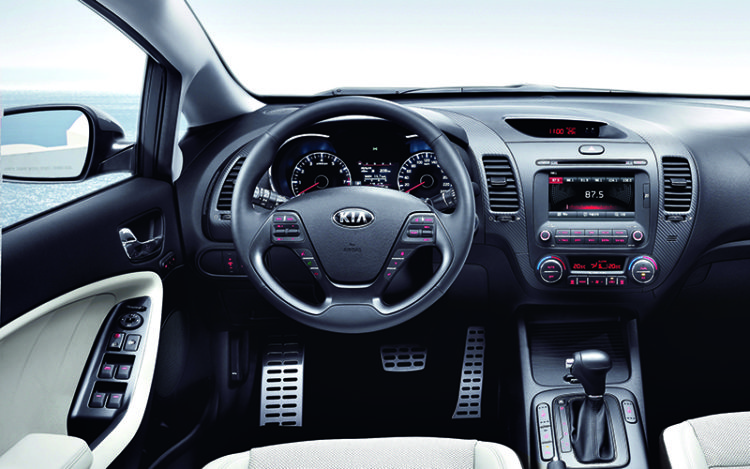 Forte will have plenty of kit, including a touchscreen infotainment system.

Why the Cerato Forte did well is no mystery – it was light years ahead of its predecessor, the Cerato, in just about every conceivable metric. For the first time in years, a Kia could be described as handsome, boasting a quality interior, handling well and having a decent enough drivetrain while remaining affordable.

In its second (post-Schreyer) iteration, the Cerato Forte, renamed the Forte K3, is even better-looking than before. The Schreyer design hallmark of the “Tiger Nose” grille, now finished in chrome, has grown and dominates the car’s front end.

It’s a similar size to the one used on its bigger brother, the Optima, and entirely intentional, says Schreyer. “The front of a car needs this recognition, this expression. A car needs a face, and I think the new Kia face is strong and distinctive. It should immediately allow you to identify a Kia even from a distance.” 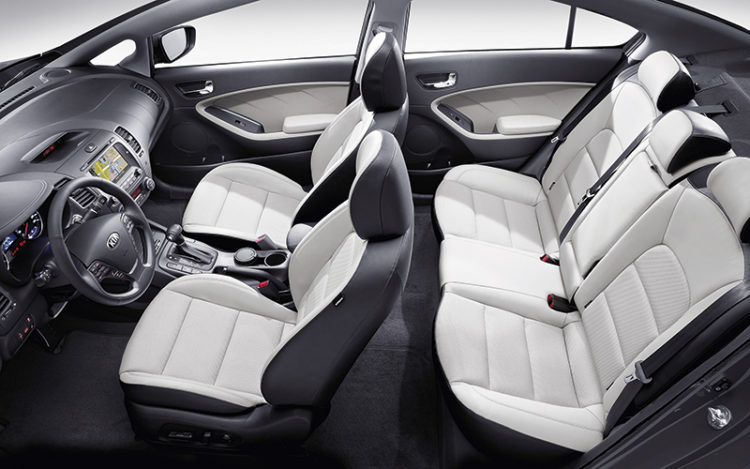 If that oversized grille isn’t enough to grab your attention, perhaps the xenon headlamps with LED daytime running lamps will. Or, the handsome 17-inch alloys wheels and rakish wedge-shaped profile might possibly win punters over. All told, the Forte K3 is a tough car to fault on the design front, although we do think that the wraparound LED tail-lamps, bright and stylishly designed as they are, seem a little too large and intrude too much into the profile’s design.

Most important, though, is how the Forte K3 has improved in quality. Where its predecessor could look a little rough around the edges, especially upon closer inspection, this one has almost Teutonic levels of build quality. There’s a tautness to the shut lines and panel gaps that rivals that of European offerings.

Indeed, even the little things like the key, with its flush-fit buttons and shiny chrome finish, are akin to those made for German models. While we’re on the subject of carmakers from Germany, the Forte K3’s cabin is another indication that Kia is edging ever closer to these powerhouses in terms of build quality, ergonomics and design. Almost everything in the cabin looks and feels a couple of notches up from the Cerato Forte. 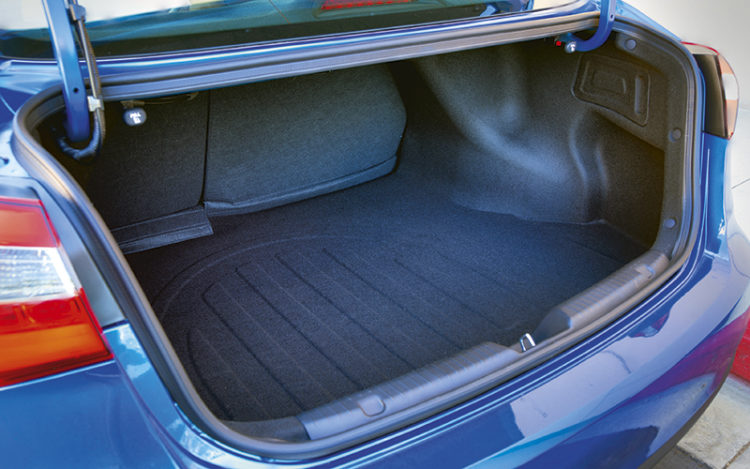 The well-planned dash is angled towards the driver (like the one in the Optima K5), with all controls falling nicely to hand. The Forte K3’s cabin is also populated with top-drawer items including a colour multi-function display, touchscreen infotainment system, integrated reverse camera, and ventilated and electrically adjustable front seats.

Along with all the above, our test car (the range-topping SX variant) also gets air-conditioning vents for the rear bench and factory-tinted windows. It’s this that will hit local showrooms in the third quarter of this year, although local dealer Cycle & Carriage will omit the sunroof that came with our test car (citing headroom compromises). Not too shabby for a car in the “budget” class, we say.

That will be powered by a 1.6-litre 4-cylinder petrol engine with 130bhp, the most powerful in its class for a naturally aspirated unit, although the conspicuous absence of any turbocharged powerplants has to be noted. 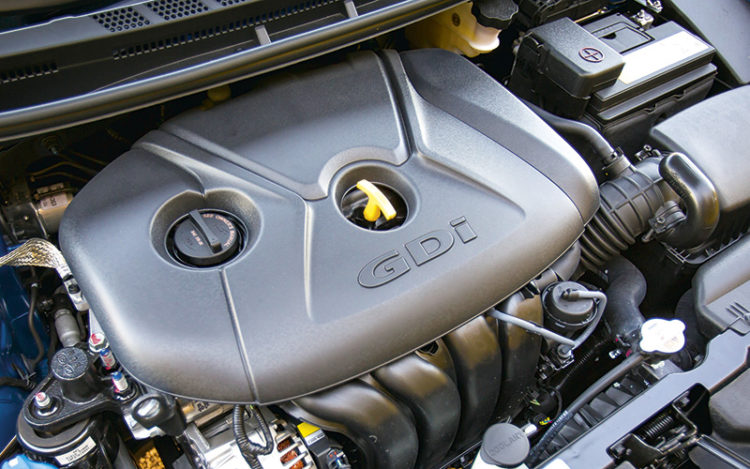 Singapore-bound cars will have non-turbo 1.6-litre engines that produce 130hp.

The lack of forced induction is evidenced by its CO2 emission figure of 160g/km, which barely scrapes into the CEVS rebate band.

While this makes the car eligible for a $5000 tax break, it’s also notable that just 1g/km more and it will be in the CEVS’ neutral zone. This is unusual for a mid-sized car these days, with its forced-induction European rivals easily coming under 140g/km ($10,000 CEVS rebate).

The absence of turbocharging is also evident in the Forte’s century sprint timing of 11.6 seconds. It’s sprightly enough in the real world of our 250km test route in Dubai, but after having been spoiled rotten by the immediacy of a modern small-displacement turbocharged mill, it’s hard to go back to anything else.

Elsewhere on the drivetrain front, the transmission, a 6-speed automatic, is carried over (developed and manufactured in-house by Hyundai-Kia, one of the few automakers in the world to do so) and is still a class act. The paddle-shifters are also carried over, although the manual override can now be engaged simply by flipping either paddle. Before, you first had to engage the gearlever’s manual override mode before the paddles became usable. 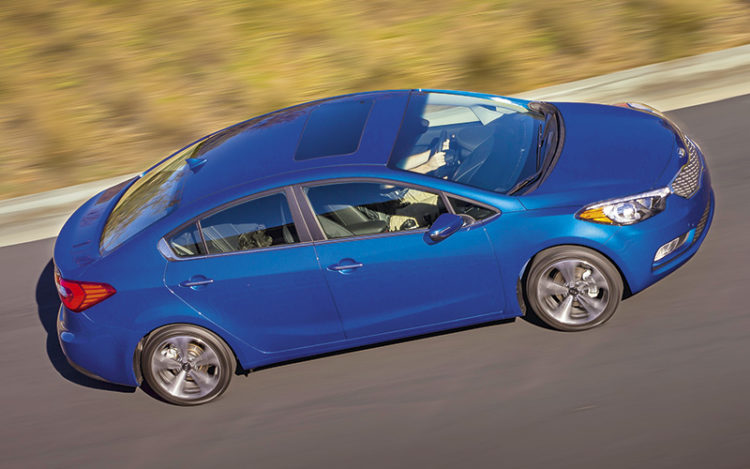 This is great news for drivers keen on a spot of instant “DIY” every now and then. A few pulls of the downshift paddle, and a lower gear can be swiftly engaged to help you attack the series of tight bends ahead.

Unfortunately, we weren’t quite able to test that (plus the claims of a 37 percent improvement in torsional rigidity and the new electronic stability management programme) along our ramrod-straight and pancake-flat test route.

What the route did allow us to test was the Forte K3’s new three-mode Flex Steer system, which allows drivers to vary the amount of assistance from the electric power steering. What Flex Steer purports to do is provide less assistance in Sport and more in Comfort, while Normal provides a middle ground – even though we didn’t notice much difference between the three. 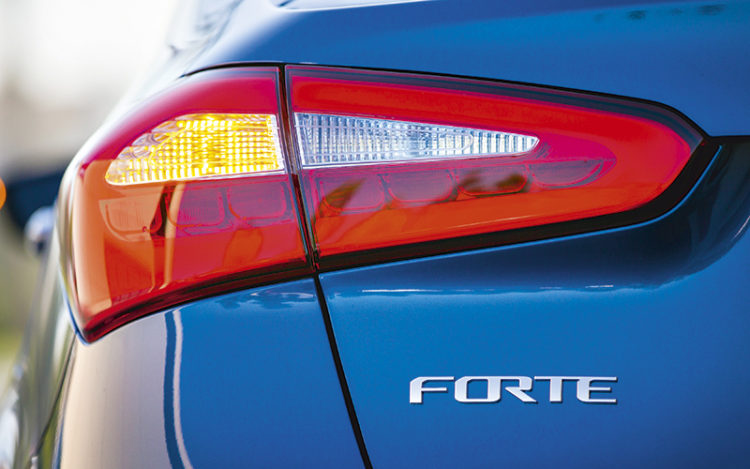 However, we’re prepared to give Kia the benefit of the doubt considering the relative gentleness of our route. This did let us test the Forte K3’s cruising refinement, however.

We noticed a marked reduction in road and wind noise against the previous model. Even at speeds above 120km/h, and with desert winds coming in from all directions, the cabin stayed fairly tranquil – the most audible sound was that of the engine.

While we would have liked to put the Forte K3 through a bit more of an extensive shakedown (along twistier roads, for instance), our first impressions are very favourable indeed.

The Forte K3 improves on what is already a winning formula. And to think that just a decade ago, this would have been unthinkable for the marque. 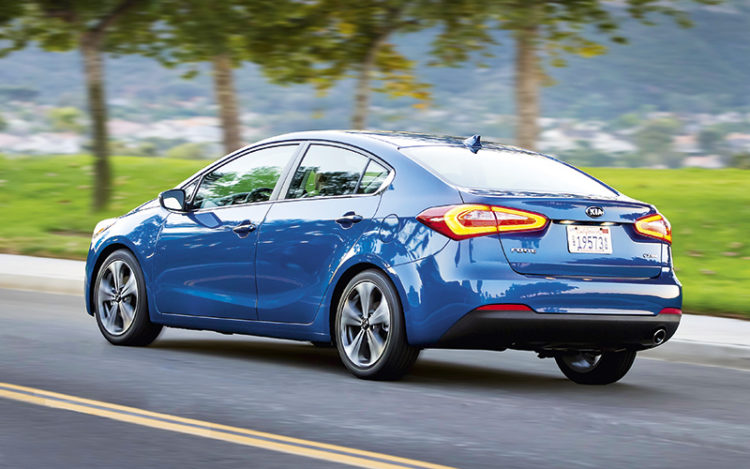 The car will still be relatively affordable, too. A spokesperson from Cycle & Carriage Kia said the Forte K3 will cost about the same as the outgoing Forte, which is around $130,000 at press time. This is despite the fact that the K3 has a higher OMV, as the $5,000 CEVS rebate will offset that higher cost.

Affordable, good-looking and well-equipped though it may be, it’s hard to see the Forte K3 emulating the runaway success of its predecessor, no thanks to the sky-high cost of a Category A COE. If the doomsday prophets are right, Cat A COEs are set to breach the psychologically significant $100,000 mark before 2013 is out.

It would be sad if K3 sales are hamstrung by COEs because the car represents a clear step above the Japanese. If Kia can keep it up, perhaps the German competition should start worrying about this Asian dragon.