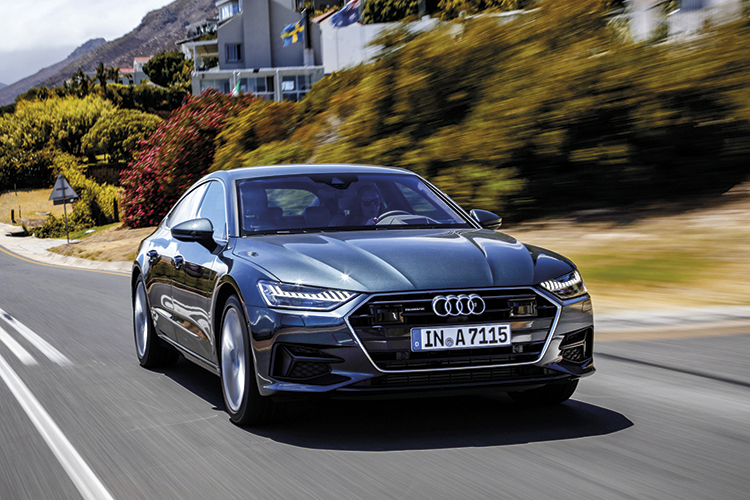 The A7’s fastback bodystyle makes it a unique and far more practical proposition than its rivals.

These days, more than half of the new models being unveiled by carmakers are either SUVs or crossovers. That’s why the launch of a stylish fastback, such as the all-new Audi A7 Sportback, is something to celebrate.

The design of the second-generation Audi A7 Sportback is an evolution of the original model’s. The grille is now much wider, sits lower and has a hexagonal outline that is accentuated by sharp corners. Many of the lines around the front, such as the sharp bonnet creases and the slim headlights, seem to extend out from the grille. And the optional Matrix LED headlamps are the coolest you will find anywhere.

Audi’s obsession with LED lights extends to the interior. The driver can tweak the lighting intensity, colour and contours around the passenger cabin.

This ambience complements the high-tech dashboard, which consists of three high-definition electronic displays which have replaced the instrument panel, infotainment and climate controls. 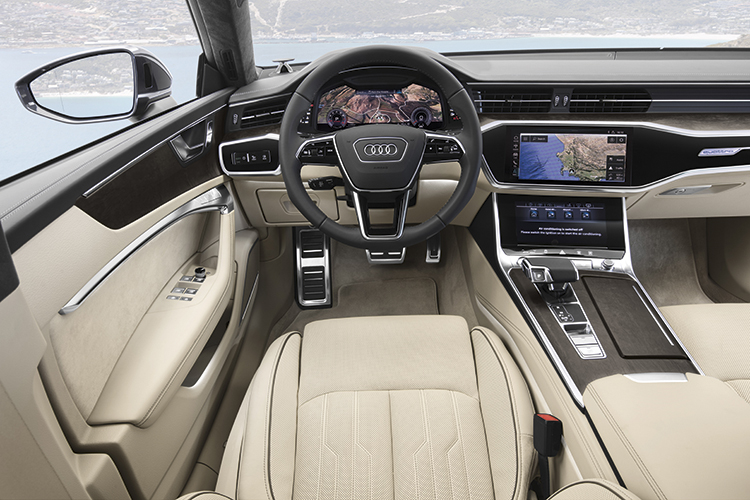 Advanced cockpit can be illuminated in a variety of colours and is equipped with more touch-operated controls than before.

The new Audi A7 Sportback’s two touchscreens with haptic feedback make up the latest version of Audi MMI. The only element from the older generation of Audi’s MMI is the volume control knob for the audio system. Such a knob works far more effectively than a touch-sensitive scale on a screen, no matter how beautiful it looks.

Audi’s virtual cockpit is the main instrument cluster for the driver. It is a high-definition graphical display of the speedometer, tachometer and navigation map in the centre. While virtual cockpit works perfectly, the touchscreen version of the MMI is somewhat debatable.

Those who grew up in the smartphone era will have no issue with the controls, but having to look at either the upper or lower screen in the centre of the dashboard to alter settings is not intuitive.

Thankfully, there is a voice command function, but it doesn’t work for every setting. Perhaps the smartphone generation is sufficiently astute and able to make adjustments after just a split-second glance. 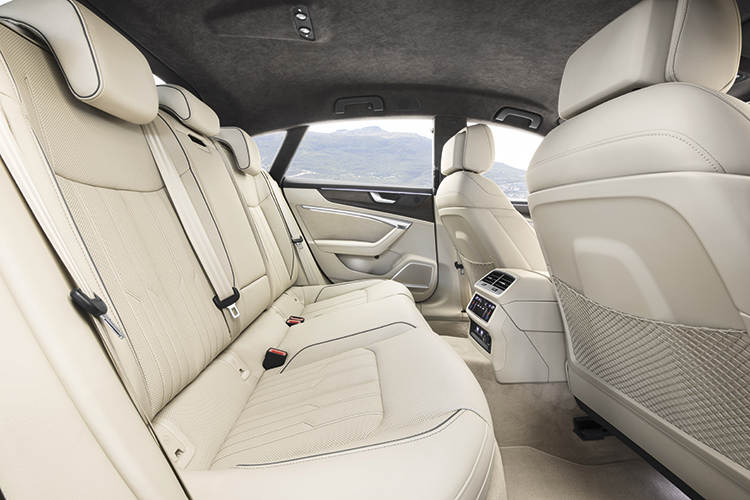 The techno-fest continues here, with a touch panel for adjusting climate settings and two USB ports for charging smartphones.

Even backseat passengers have a small touchscreen displaying a bar graph where temperature settings for the left and right halves of the rear can be individually adjusted to within 0.5 degrees C.

There is actually room for a fifth occupant since the centre console isn’t overly intrusive. On the topic of space, opening the huge tailgate reveals a massive boot, which simply adds to the practicality of this car.

The Audi A7 Sportback is marginally shorter and narrower than before, but its wheelbase is 12mm longer. At the same time, the designers have re-profiled the roofline to liberate a tad more headroom, although in fairness, it was never really a serious problem in the previous car.

The higher roofline is complemented by the Audi A7’s rear end, which looks perkier than the older model’s. If you recall, the previous Audi A7’s rear was a throwback to the 1970 Audi 100S Coupe, so its long sloping profile caused its rear end to droop. Now, with the rear end a bit higher, the Audi A7’s backside no longer has a “sad look”. 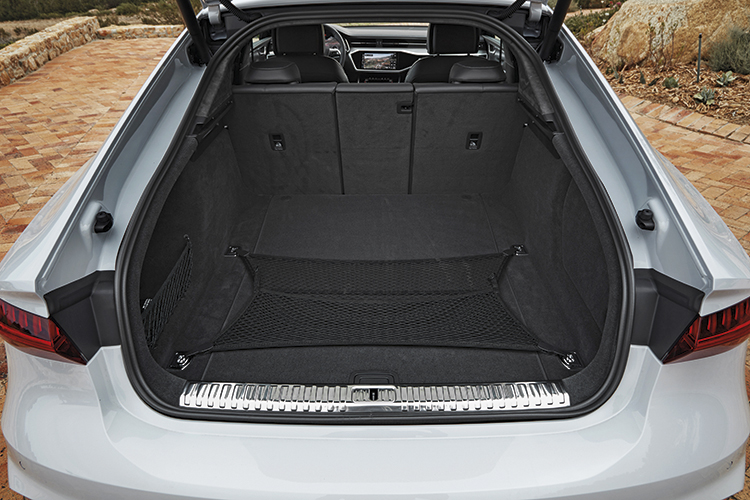 Flexible cargo hold has 40:20:40 split-folding rear seats and an elastic cargo net, but its 535-litre capacity (seats up) is identical to the older model’s.

Less exciting are the fake exhaust outlets, which are embellished with chrome surrounds. You never really see the actual tailpipes, as they curve downwards and end before reaching the rear valance. Perhaps the display of real pipes is reserved for the sportier S7 and RS7 versions, both of which we await very eagerly.

Not that this “base” model is a slouch. It is powered by a 3-litre V6, the same unit used by the Audi S4, S5 and the latest Porsche Cayenne. With a single turbocharger nestled in the valley of its 90-degree V-block, this engine produces 340hp and 500Nm.

Audi’s valvelift system (AVS) varies timing and lift for both efficiency and power. In part-load conditions, mostly in urban driving, the engine operates in B-cycle mode. It is essentially a Miller-cycle operation where fuel economy is optimised at the expense of outright power by reducing piston pumping losses. 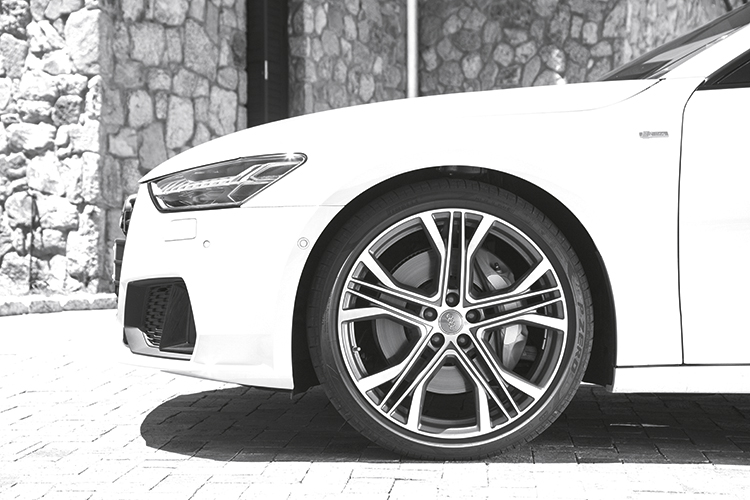 AVS manages this by keeping the intake valve open a little longer than normal even after the compression phase has begun, allowing the piston to ascend the cylinder with less resistance.

In addition, the powertrain comes with Audi’s new Mild Hybrid (MHEV) system. The technology uses a front-mounted, belt-driven alternator that also functions as the starter motor. When coasting, the engine is shut down for as long as the accelerator is not activated, and starts up immediately when power is demanded by the driver.

The starter-alternator runs on a 48-volt DC circuit with electrical energy storage provided by a sealed lithium-ion battery. However, the fuel savings are not huge, with Audi claiming that the MHEV saves up to 0.7 litres of petrol every 100km. 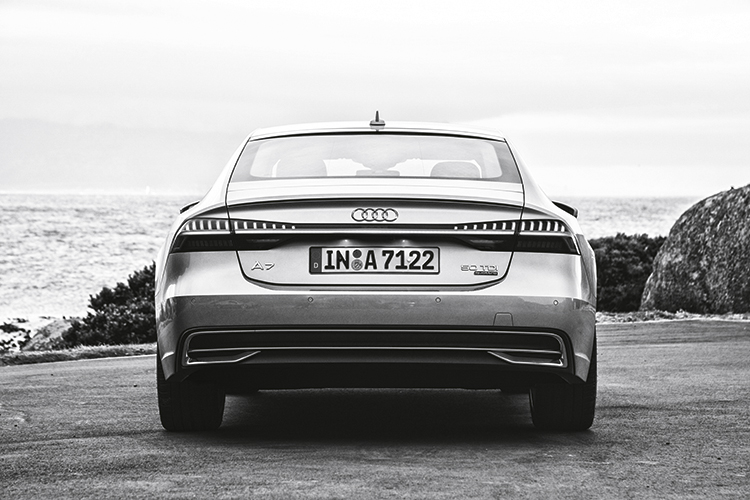 The A7 Sportback’s performance is of greater interest. This is a large fastback with a kerb weight of 1815kg, yet it comfortably accelerates from rest to 100km/h in 5.3 seconds. That is pretty quick. The 7-speed dual-clutch gearbox does a splendid job delivering seamless gearchanges, and manual selection is available using either the gearshift lever or the steering-mounted paddle shifters.

Audi’s quattro (all-wheel-drive) drivetrain and dynamic steering are standard on all 3-litre A7s. The test car was additionally equipped with air suspension and dynamic four-wheel-steering.

The four-wheel-steering’s variable ratio system consists of an external drive that not only adjusts steering response depending on speed and driver input, but also intervenes to make corrections when the sensors detect that the car is straying from its lane. The latter feature, however, requires the road to have clear lane markings. 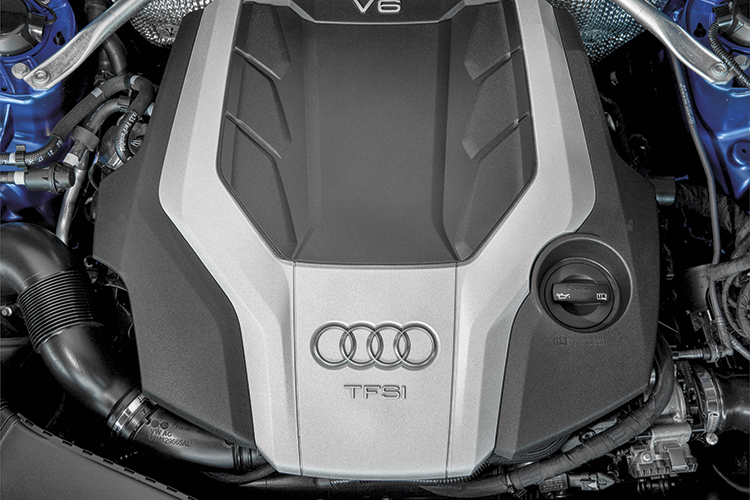 Turbocharged V6 with 340hp zips the A7 Sportback from rest to 100km/h in 5.3 seconds, but fuel savings from the MHEV aren’t huge.

Four-wheel-steering is an option worth considering. While its action is not noticeable at speed, it is designed to enhance the car’s agility by giving the rear wheels a small degree of steer in the same direction as the front wheels. Below 60km/h, the rear wheels’ steer angle is up to five degrees in the opposite direction, which reduces the standard car’s turning radius by 1.1m.

On the mountain roads around Cape Town, the Audi A7 Sportback proves itself to be a clean and smooth performer. Its refinement somewhat masks its acceleration but its poise and grip are nothing to be scoffed at.

With an overall length of nearly 5m, the Audi A7 is no compact sports car. Still, its responsive steering and all-wheel-drive make it an easy car to drive quickly, even on tight roads. 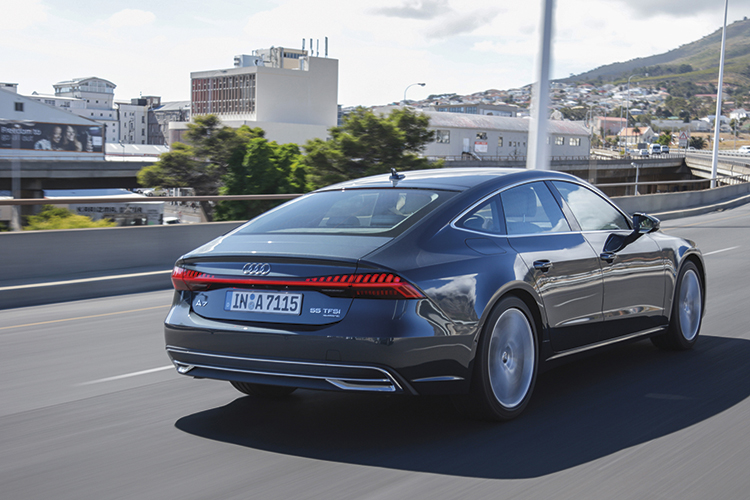 The Audi A7 Sportback’s refinement masks the punchiness of its acceleration, but its poise and grip are nothing to be scoffed at.

The Audi A7 Sportback is in a niche segment where it competes with BMW’s 6 Series Gran Coupe and Mercedes-Benz’s CLS. Like its rivals, the Audi oozes style and has plenty of passenger amenities.

But because its competitors are notchbacks, the A7’s fastback bodystyle makes it a unique and far more practical proposition. 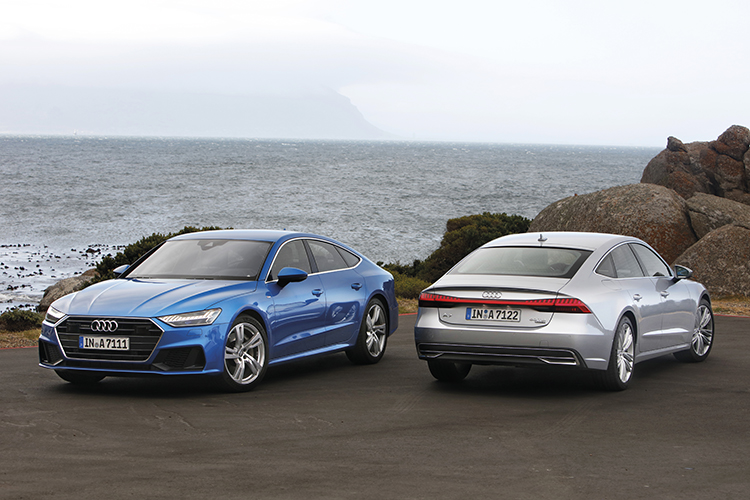 The Audi A7 Sportback is no compact sports car, but its punchy motor, responsive steering and all-wheel-drive make it an easy car to drive quickly, even on tight roads.

Check out the Audi A7 Sportback for yourself