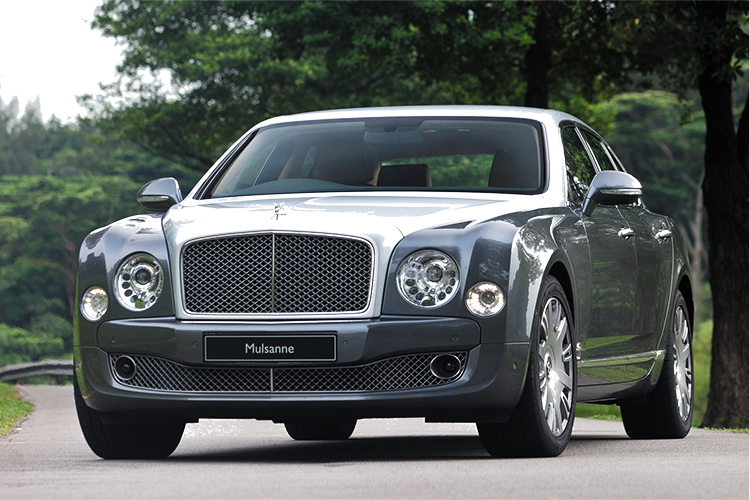 The big-bruiser Bentley that we know as the Arnage lived an illustrious 12 years.

It was originally developed by Bentley Motors’ previous owner Vickers Plc, but as the company was acquired by the Volkswagen Group soon after the Arnage’s launch, all subsequent updates, upgrades and facelifts to the model occurred under German ownership.

Ironically, VW saw fit to replace the German-sourced 4.4-litre twin-turbo V8 of the original Arnage with the really original Bentley 6.75-litre V8 that has roots running 50 years deep. But what is truly astonishing is the old engine’s survivability, even to this day.

Taking over where the Arnage left off is the new Bentley Mulsanne, the British carmaker’s flagship and the newest super-luxury saloon to come out of Britain.

The Arnage and its predecessors were variants of Rolls-Royce models since the mid-1930s, but the Bentley Mulsanne is a totally individual model that has little in common with past Bentleys, or with other current Bentley cars for that matter. Bentley Mulsanne cockpit features a beautiful combination of timber, leather and chrome, along with gadgets.

The Bentley Mulsanne is a big vehicle, measuring 5.575 metres from bumper to bumper, 1.926 metres across the front door mirrors (when folded) and tipping the scales at 2.585 tonnes.

It would have been heavier, if not for the extensive use of aluminium body panels on the steel monocoque.

The boot lid, by the way, was designed to contain the various antennae for the Bentley Mulsanne’s many communication features, so it could not be made of metal.

Hence, for the first time in the history of Bentley – a boot lid in “plastic”, or composite polymer as they prefer to call it.

Everything on the car that is finished “bright” is actually chrome-plated metal or polished stainless steel. 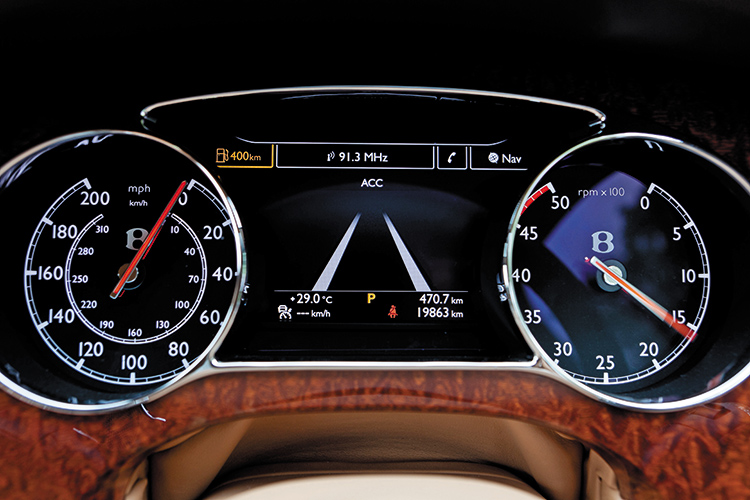 The brightwork, however, is not what strikes you the first time you see a Bentley Mulsanne.

That would be the massive grille and its equally sizeable surround, flanked by a pair of huge round headlamps and a smaller secondary pair which is, unusually, set lower and further outwards.

Each xenon main light is encircled by a set of LEDs, which come on with the high beam. A similar ring of LEDs on the secondary lamps serves as the daytime driving lights.

With its short front overhang, coupe-like roofline and tapering overall profile, all sitting on 20-inch alloy wheels with 265mm-wide tyres, the Bentley Mulsanne is unquestionably a handsome machine.

That pronounced crease on the front fenders is created by a method known as “superforming” – the aluminium sheet is heated to around 500 degrees Celsius, then pressed into the mould by pressurised air. 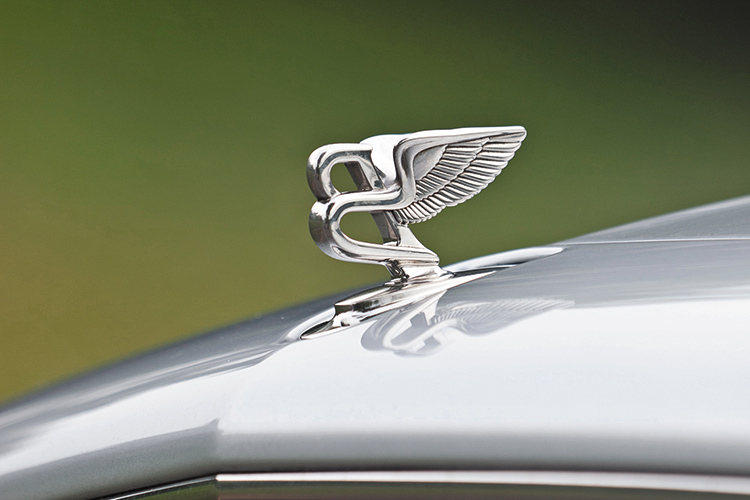 Press a dashboard button and this optional winged-B emblem disappears magically into the bonnet.

Conventional methods use moulds based on a two-part press (tool and die) and cannot achieve similarly sharp creases.

To Bentley owners, the essence of luxury is inside the “drawing room” for the road.

It is highly unlikely that any two Bentley Mulsannes will have identical interiors because there is a plethora of hides, colours, veneers and accessories to choose from.

In fact, there are more permutations and combinations than the number of Bentley Mulsannes that will ever be built.

As you would expect, the dashboard is an exquisitely finished wood panel that incorporates chrome-finished vent outlets, instruments and controls. 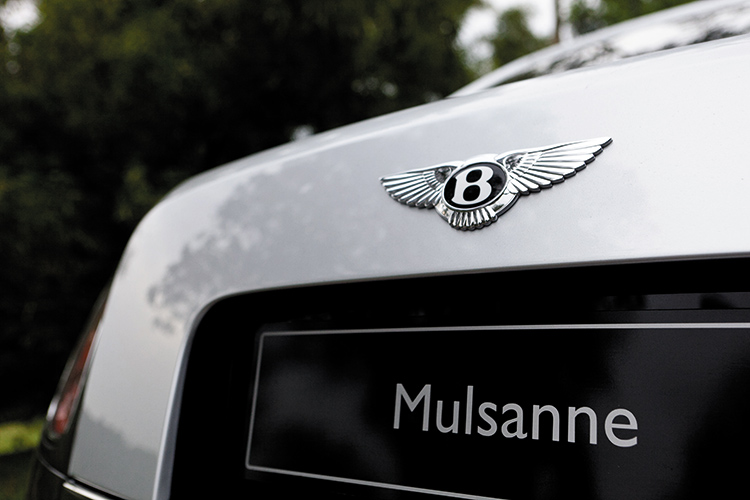 Like the exterior, anything that is shiny and resembles metal is really metal. No plated plastics in this car. Wood panels continue along the doors over the B-pillars and right around the back seats.

Each of the two rear occupants has individual controls in the centre console for seat adjustment. There is also a remote controller for entertainment functions, although there is only one LCD panel sited on the dash.

Of course, individual multimedia screens attached to the rear of the front head restraints are available. That is merely one of many cabin options that the Bentley factory offers to its customers.

Whatever the level of customisation, the attention to detail and quality of the materials are always first class.

Bentley has taken great pains to ensure that driving this car is every bit as special as enjoying the ride sitting in the back. The all-alloy V8 engine (mentioned earlier) has received a substantial makeover, including variable camshaft timing and cylinder shut-off to keep it in step with emissions standards. 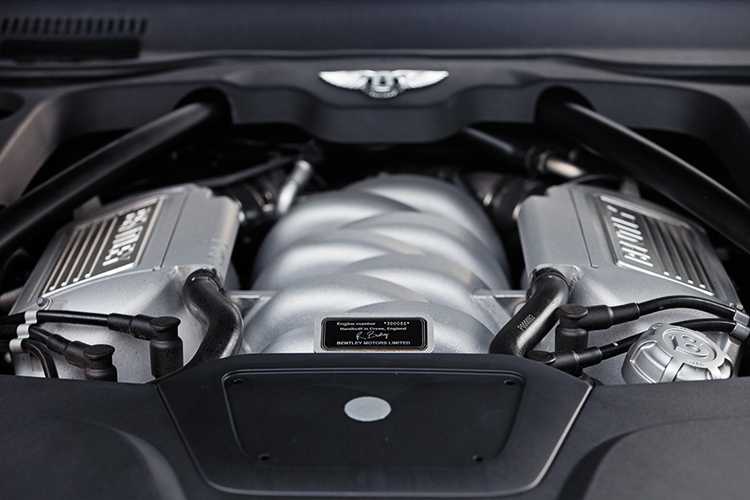 However, the pushrods are still there and the heads are still of the 2-valves per cylinder design.

Even though redlined at just 4500rpm, turbocharging and the fact that each cylinder displaces nearly 850cc are enough for the engine to deliver 505bhp at 4200rpm.

It is an easy car to drive smoothly and quickly. The accelerator pedal is a little insensitive from standstill, but that is to make sure the torque comes in gradually and does not cause discomfort to passengers.

As soon as the Bentley Mulsanne moves off, there is little the engine management can do to hide its sheer performance. 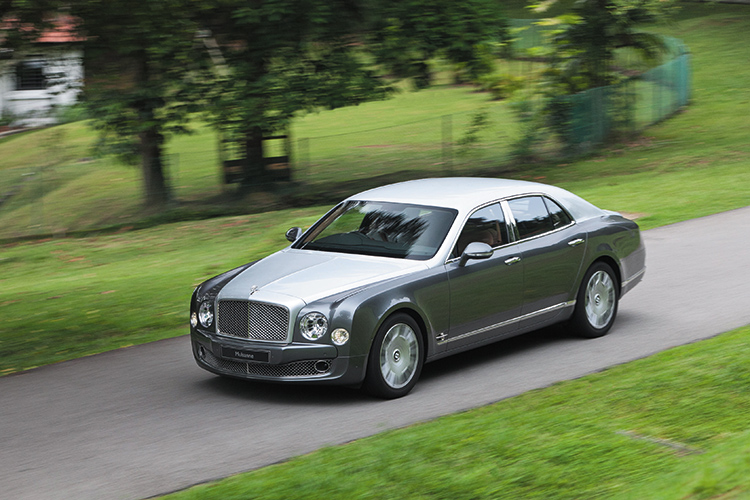 Dynamically, the Bentley Mulsanne has an on-board selector that alters the behaviour of the steering and air suspension.

In its softest setting, Comfort, the Bentley Mulsanne rides with a float that most people will enjoy, but the system still makes continuous adjustments to the damping and firms up immediately when yaw is detected.

At this level of motoring, the priority for buyers is exclusivity, fine craftsmanship and supreme quality, all of which the new Bentley Mulsanne provides in abundance.

That it is also a fine car to drive fast is a mere bonus.

Check out the Bentley Mulsanne’s main rival, the Rolls-Royce Phantom