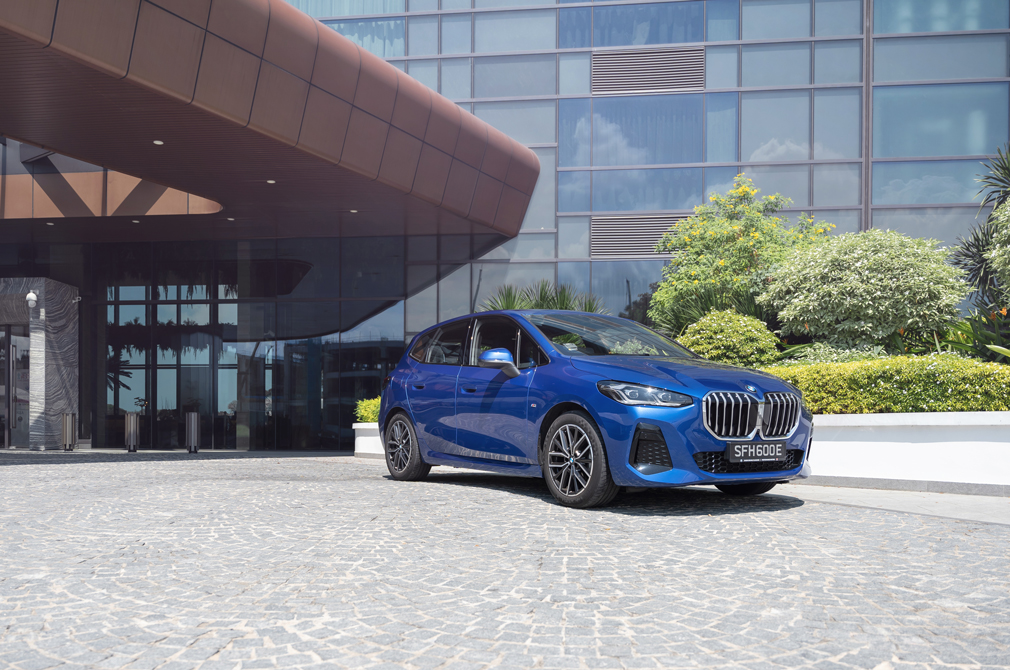 Cosying up to pillars while parking is my new behavioural obsession. Not necessarily because my neighbours are a bunch of door-dinging gorillas, but because BMW’s reverse parking sensor tones are so delightful to the ear.

I know, I’m a weirdo. After decades of having my eardrums punctured by the rudeness of lesser marques’ insistent beeping, revelling in the 218i’s aristocratic acoustic manner is a rare treat. Watching the camera feed sweep and swoop from different angles with a 3D representation of your car overlaid is an amusing aside as well.

Forget the multiverse of madness. Car lovers in any dimension would never have thought they would ever read those words.

Still, the new 2 Series Active Tourer enters the market after BMW has had some time to mature and broaden its brand identity.

While all BMWs used to take inspiration from the M3, the Active Tourer clearly channels the iX, a giant electric SUV with sofas for front pews. More on that existential evolution later.

If the previous car was a gateway to Bavarian gentry, this one is a proper patrician’s mansion. As it should be for more than $220,000, not all of it can be blamed on a six-digit COE. 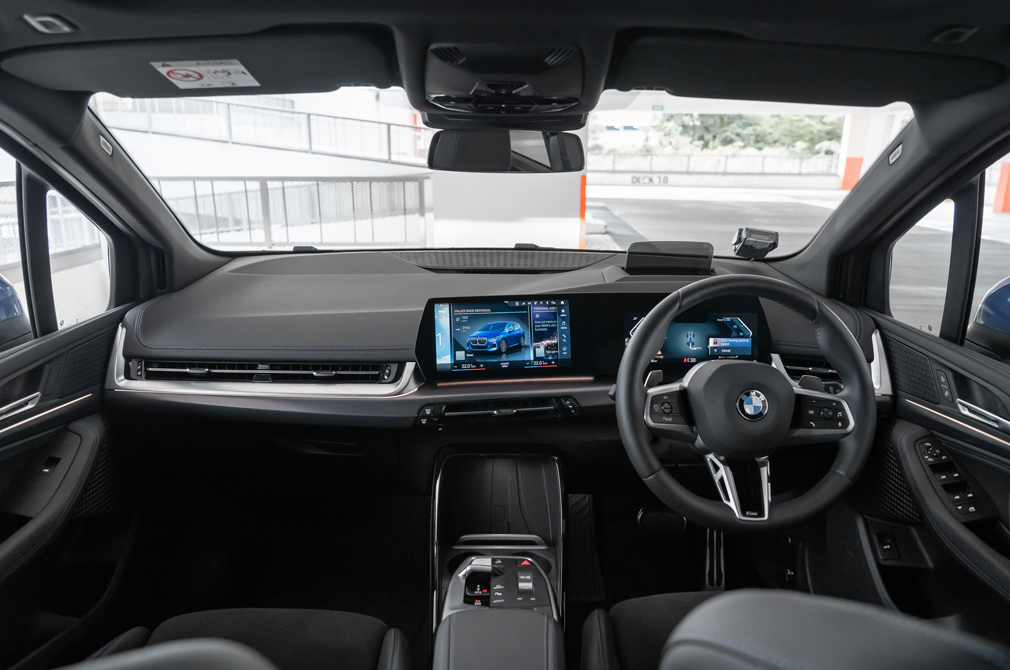 Through the generously sized door apertures, you will struggle to find any hollow surfaces or unimaginative texturing. Ambient lighting bleeds through slickly patterned inserts, while genuinely interesting geometric complexity sits proud of elements with true heft and substance.

They all lend the car’s cabin a sense of attention to detail that successfully advertises the MPV’s luxury credentials. It is streets ahead of its predecessor’s solid but rather pedestrian looking environs, and there is no chance of mistaking this dashboard for a mainstream brand’s efforts.

Superficially, at least, BMW’s latest all-touch iDrive looks cutting edge and attractive. Hexagonal motifs in the instrument cluster have been fleshed out with fuller graphics to convey critical with far greater clarity than they did in the brand’s original flirtation with digital displays in the G30 3 Series.

Attempt to venture beyond the main screen’s blocky core functions, however, and the software mimics early smartphones by presenting difficult to distinguish icons and submenus. At least the air-con controls remain permanently on screen. 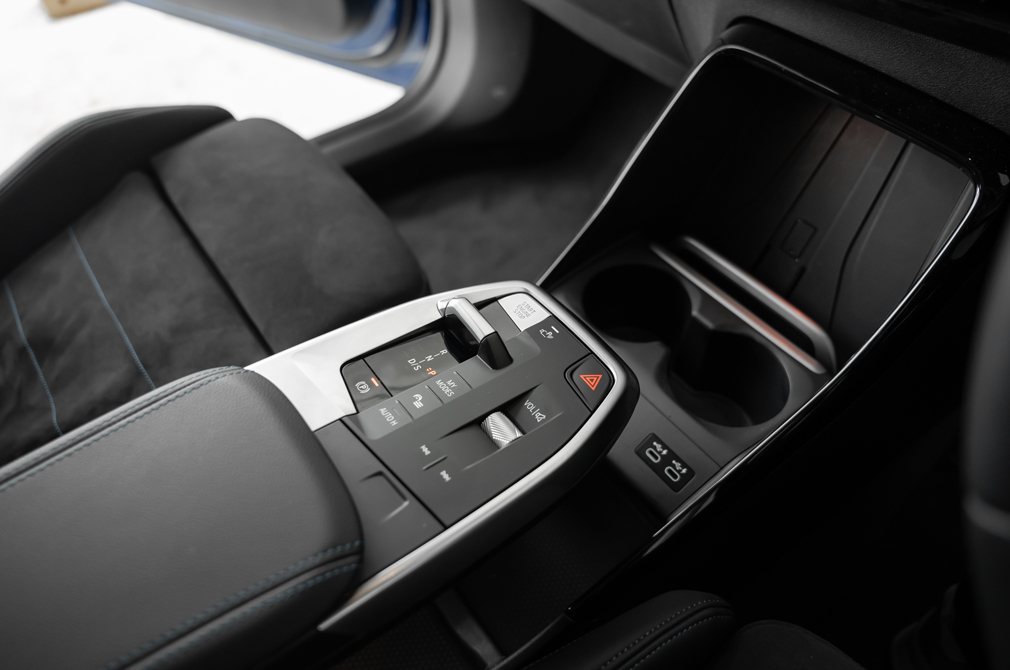 The loss of the iDrive system’s traditional scroll wheel in lieu of an all-touch interface means the centre console now houses only the gear selector switch and a volume scroll wheel floating over a generous storage tray.

Finally, a BMW which does not force you to choose between a cappuccino and your house keys. As for your phone, it hooks up to the 10.25-inch display via wireless Android Auto or Apple CarPlay, while nestling uniquely upright in a wireless charging pad.

Alcantara, itself a rather stuffy, sticky, and hot material, on lumpy-feeling sports seats reduce the comfort quotient somewhat. To its credit, the material’s stubborn hold on the fabric of my shirt is commendable.

But while I get the concept of a grippy seat in a sports car, it does feel like overkill here in a family breadbox.

Hmm. The first Active Tourer, in a bid to live up to the BMW badge, obviously went out of its way to prove itself the sportiest of the little pragmatic lot.

The result was a slightly stiff-legged compromise that never felt as comfortable in its workmanlike skin as the equivalent Volkswagen. The new one smartly embraces its mission with greater confidence. 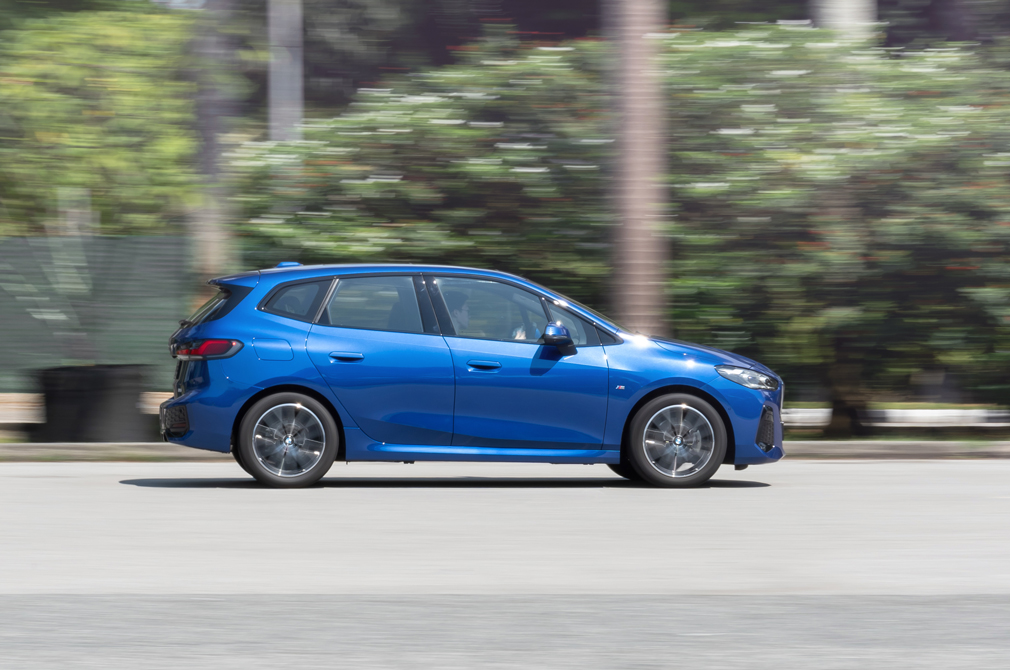 The result is a car with ride and bump absorption that remains Germanic in its general sense of firmness but far more pleasantly so, without sharp edges nor clattering.

Road imperfections, even sudden, visible ones, are effectively damped, even on this M Sport version. Because the car is very solidly hewn and feels it through its resolute structure, it consumes the length of the PIE with posh hush.

Its bluff face punches through the air with remarkable silence, and with every kilometre travelled one is once again reminded that this is no mere tool of transportation, but a legitimate luxury automobile.

Motive urgency is aurally conveyed with a slightly growly engine note that is just distant enough to be likeable, and the motor easily achieves and holds triple digit speeds.

Sport mode predictably sharpens responses, and it does so commendably without inflicting a choking sense of impatience even at crawling speeds. It is my preferred mode to leave the car in, no matter my mood. 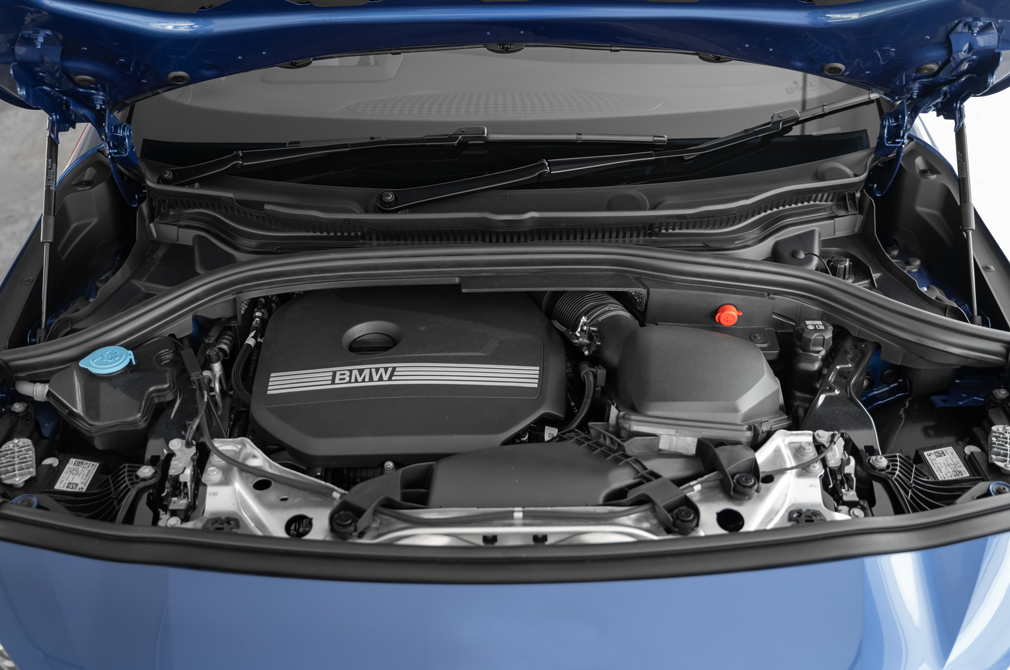 Most pertinently, its power is metered out with far more grace than the surging, lurching turbocharged 1.3-litre lump that Mercedes-Benz stuffs in its entry-level A-Class, GLA and GLB models.

The steering wheel has a nice, thick-ish rim with an expensive feeling texture, much like the rest of the interior. Its quick ratio to the front wheels takes a bit of getting used to, as does its power assistance that can initially feel disconcertingly light.

However, a few rapid left-right cambered transitions swiftly build confidence, and it is at this point that the car’s well-judged fluency is at its most convincing. 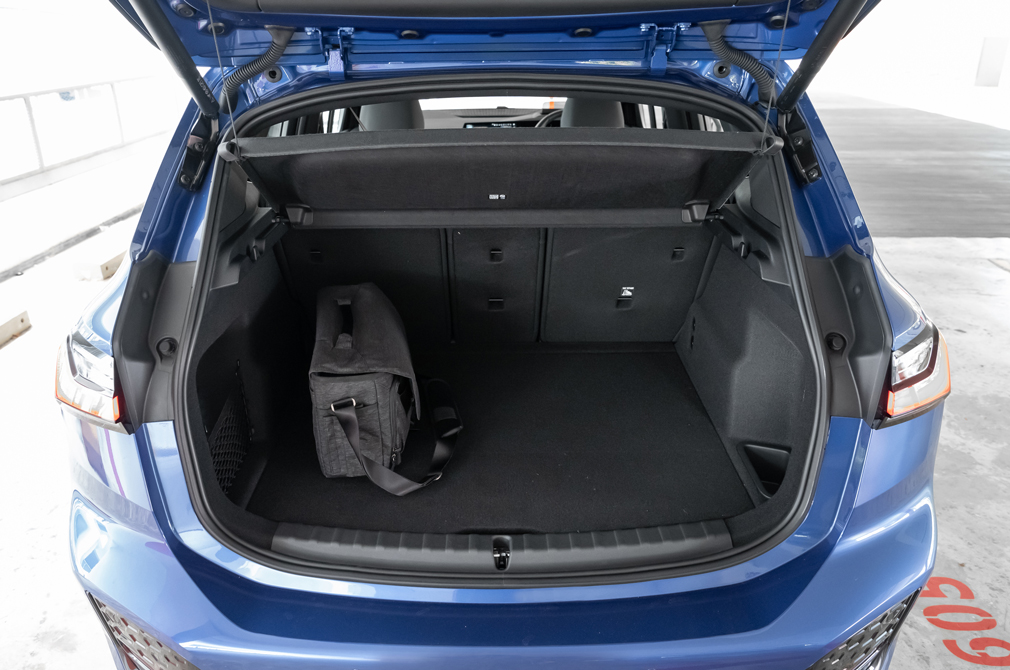 It is to Munich’s credit that that is true even here in a leather-lined “breadbox”.

In the back, there are no surprises, as class-competitive headroom and legroom combine with the vein of sophisticated quality running through the car to satisfy in-laws and children alike.

Sliding seats that split-fold 40:20:40 enhance practicality further, and a 470-litre boot with a low load lip will swallow prams with more ease than a Honda HR-V could.

The first-generation breadbox BMW was greeted by enthusiasts as a heretic, but by buyers with voracious abandon.

Seven years and a barrage of determined apostasy later, a cuboid Bimmer is no longer the shock to the conscience it once was. Gigantic nostrils? Oh sure, why not. Gen Z is already numb to your “outrage tactics”.

Most importantly, the new Active Tourer improves upon every aspect of its predecessor. It has shed the chip on its shoulder for being a front-wheel-drive block, while climbing far enough back up the luxury ladder to put clear air between itself and the chasing pack. 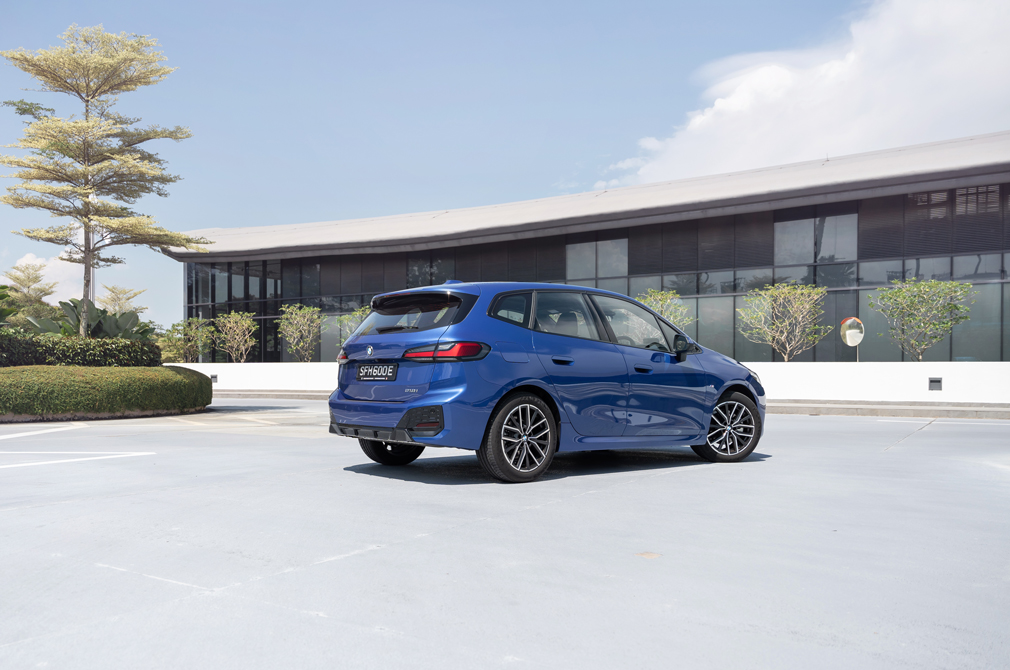