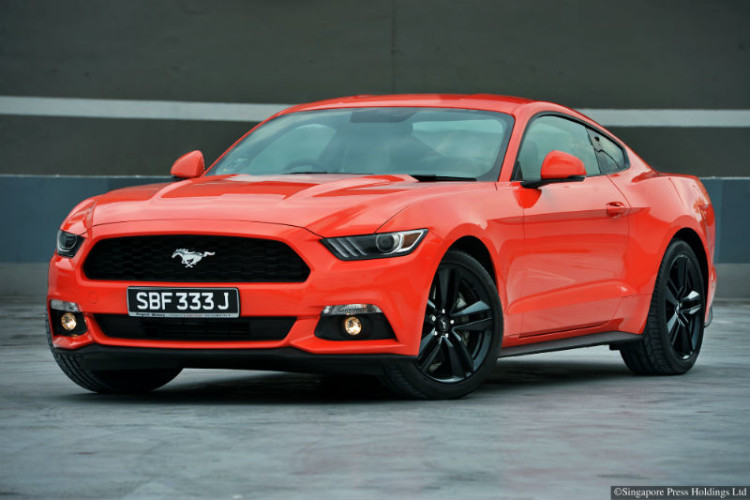 The Mustang has had such a huge presence on the silver screen and the airwaves that I feel I know the car, even though it has never been in Singapore.

This is the first right-hand-drive sample manufactured in a 100-year-old plant in Flat Rock, Michigan – the only place which makes the Mustang.

This sixth-generation car harks back to the styling of the 1960s and 1970s, arguably the marque’s golden years. Its long, bulging bonnet, swept- back windscreen, tucked-in lower lip and tail-lamp clusters arranged in slants connect with the classy silhouette I see in my mind’s eye.

In the metal, the car exudes a certain presence, a quiet confidence – even if it is not the most handsome thing on the block. Or the best built. You immediately notice a small misalignment on the driver’s door handle.

Inside, fit and finish is half a notch below what you would find in a German car. The cockpit has a touch of the past, with a red-rimmed start button at one end of a row of flip switches.

For a car that is larger than a Mercedes-Benz C-Class, it does not have an especially roomy cabin. The handbrake lever is situated on the other side of the transmission tunnel, a reminder that the car was first designed to be a left-hand-drive.

Still, it feels special. Perhaps because it is different from what Singapore drivers are used to.

The test-car is powered by a turbocharged 2.3-litre inline-4. Pop open the hood and you will notice how little space it occupies in the expansive engine compartment. Enthusiasts might want to go for the 5-litre V8, which is available on special order.

It fires up with hardly any drama, which is a bit of a letdown. In fact, the engine remains rather sedate below 3000rpm. It is only when I rev past 3000rpm that a song befitting the legend arrives. 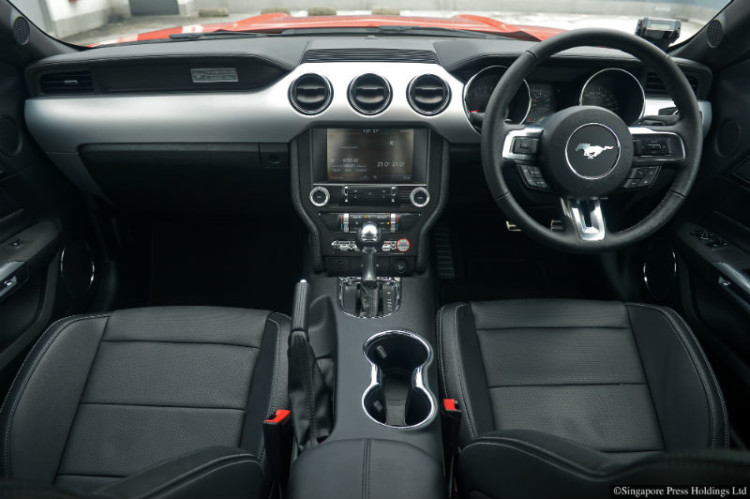 Unfortunately, there are few opportunities to exploit this trait. With so much torque at its disposal, most motoring needs here are below 2500rpm.

Choosing a sportier drive-mode builds up revs more easily and adds more heft to the steering. It feels better this way, but you will still run out of road sooner than you expect.

The Mustang drives like how you would imagine a car made for the United States’ never-ending highways would drive. Plunge the gas pedal down and the car leaps forward with a slight lift.

Its expansive front end, with the bonnet’s power dome, features prominently in your line of sight as the car swallows up the distance. It is also what you feel as you take the first bend. With so much torque going to the rear axle and so much mass in front to contend with, the Mustang demands attention at the wheel.

Besides a rear limited slip differential and traction control, the car has no other driving aid to speak of. In that way, it has an old-school charm that those who tire of today’s overly assisted and insulated cars might appreciate.

Indeed, the car is not the most blemish-free creation around. But in spite of that – or some might say because of that – it is more interesting than many cars today.

If you want a well-disciplined thoroughbred, look to the German nameplates (and be prepared to pay more). But if you want something with a wild streak which you can learn to tame, the Mustang is worth considering.