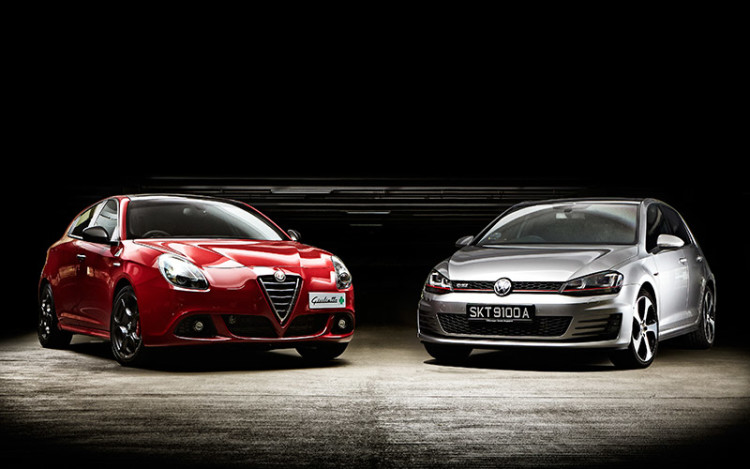 When a driving enthusiast encounters an exotic car on the road, his eyes will be drawn to its curvy lines and gleaming paintwork. His ears will be tuned to the titillating tunes of the vehicle’s engine and exhaust. Wolf-whistles, panting and perhaps drooling are common reactions, too.

Car lovers experience the same symptoms upon hearing the letters “QV” and “GTI”.

The former stands for Quadrifoglio Verde, which is Italian for four-leaf clover. In the past, this symbol was painted on Alfa Romeo racecars. Today, the distinctive badge adorns the marque’s sportier models such as the Giulietta QV in this story.

GTI, on the other hand, stands for Gran Turismo Injection, which was coined by Volkswagen when it launched the iconic Mk 1 Golf GTI – the model acknowledged as the grandfather of all hot hatches. Almost four decades and six generations later, the GTI is arguably still the benchmark of the hot hatch segment.

Alfa Romeo’s task of taking on this Volkswagen is a tall order. But the carmaker’s efforts have paid off, for the Giulietta QV has what it takes to distract would-be Golf GTI buyers.

For starters, the Giulietta QV’s appearance is sexier than that of the Golf GTI. The Alfa Romeo’s curvaceous bonnet, striking shoulder lines and “hidden” rear door handles all ooze sultriness. If there’s one thing Italians know how to do, it’s making a car look good. 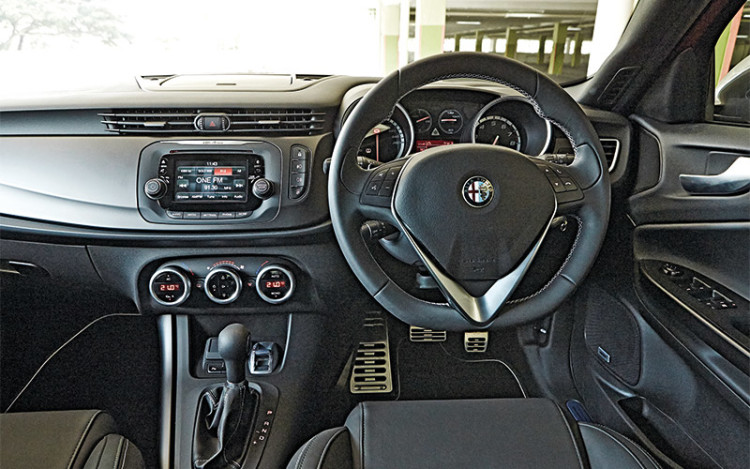 So good, in fact, that the Golf GTI seems staid in comparison. Sure, it has handsomeness and clean lines, but in terms of road presence, the GTI is discreet. It blends in instead of stand out.

The VW’s cabin, however, is a shining example of how hot hatch interiors should be built. Sometimes, enthusiasts forget that the appeal of a hot hatch lies not just in performance but practicality as well. The GTI is more spacious than the QV and offers larger storage points for various belongings.

More importantly, the Golf’s dashboard is also angled towards the driver, while the QV’s isn’t. As a result, the GTI’s driving position feels more natural than the Alfa’s.

The QV’s main bugbear, though, is a lack of driver comfort. The Alfa’s seatbacks also are a tad too stiff, making them less suitable for road trips. And despite a wheelbase that’s similar to the Golf’s, the Giulietta’s cabin is actually smaller.

The QV might be down on practicality, but it packs more ponies than the Golf. The Alfa’s turbocharged 1.7-litre 4-pot is good for 240bhp and 340Nm.

Driven in earnest, it finishes the century dash in 6.6 seconds, which is similar to the GTI’s time of 6.5 seconds. 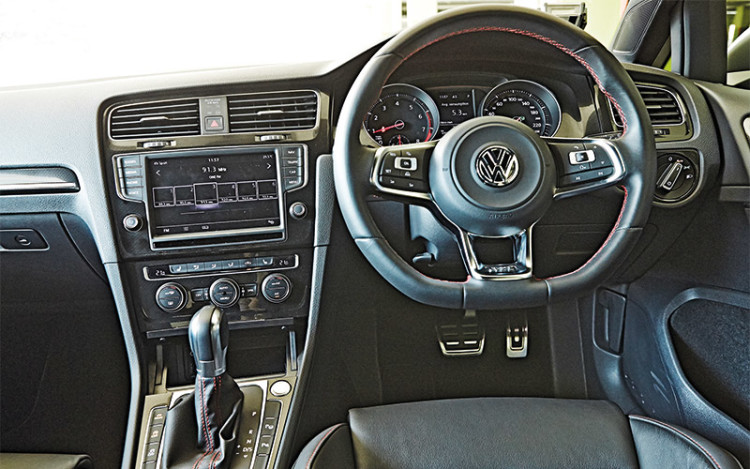 The QV, however, leaps ahead of the GTI when it comes to aural delights. With its louder engine intake and deeper exhaust roar, the Alfa sounds like a hotter hatch than the Volkswagen.

But the QV’s acceleration figures and soundtrack only tell half the story. Behind the wheel, this hatchback doesn’t feel as quick. The engine’s turbo lag is palpable, and the gearbox, despite being a dual-clutch unit, performs more like a regular torque converter automatic.

Its only advantage is that the manual shifting has the “correct” orientation (forward to engage a lower gear and backwards to engage a higher gear), unlike the GTI’s.

Getting the most out of the Alfa requires the driver to constantly keep the engine’s revs up or “on the boil”. Once the motor’s speed drops below 3000rpm, the car feels sluggish.

Helping the driver to get more out of the QV is Alfa Romeo’s D.N.A. driving mode selector. The system offers three settings in order of aggressiveness – Dynamic, Normal and All Weather (hence the name).

Boyracers will probably keep the system in Dynamic, which ensures the sharpest throttle response. Utilising the manual override function is also recommended, as this lets the driver better exploit the powerband. In terms of handling, the QV feels flatter through the corners and has weightier steering compared to the GTI. 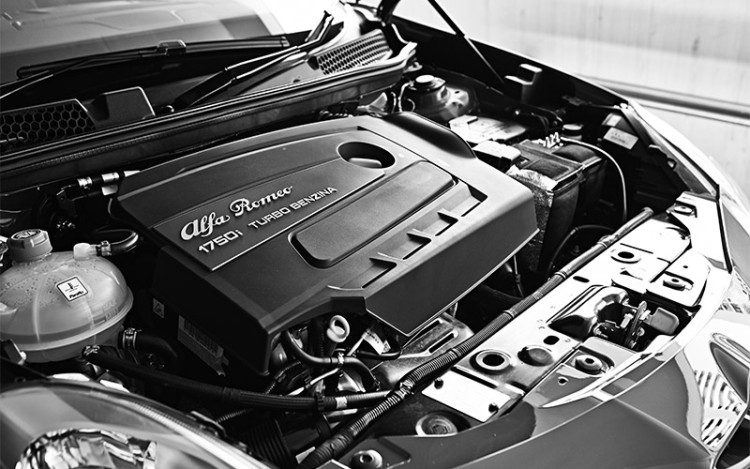 The Golf, however, feels livelier and more engaging than the Alfa when you string together a series of bends. Brake hard, tuck the nose in, and the GTI responds dutifully.

This is what makes the VW so driveable. It has a more natural flow compared to the QV, which at times needs to be coaxed into doing the driver’s bidding.

Motivating the GTI is a turbocharged 2-litre 4-pot that produces 220bhp and 350Nm. Despite the VW engine packing 20bhp less than the Alfa’s, it more than makes up for this deficit with its more willing performance and wider powerband – the GTI redlines at 6200rpm, while the QV does so at 5750rpm.

This gives the driver more “vroom” to push the GTI harder than he could the QV. That the former’s powerplant is more linear and rev-happy than the latter’s is a big help, too.

Further enhancing the Volkswagen’s performance is its excellent 6-speed dual-clutch gearbox. It’s snappier and more responsive than the Alfa’s transmission, making the manual select a real treat to use.

Like its Italian rival, the GTI also has a driving-mode selector, but the German system can better adapt to its pilot’s driving style, thanks to the five settings (Comfort, Normal, Sport, Eco and Individual) it offers. 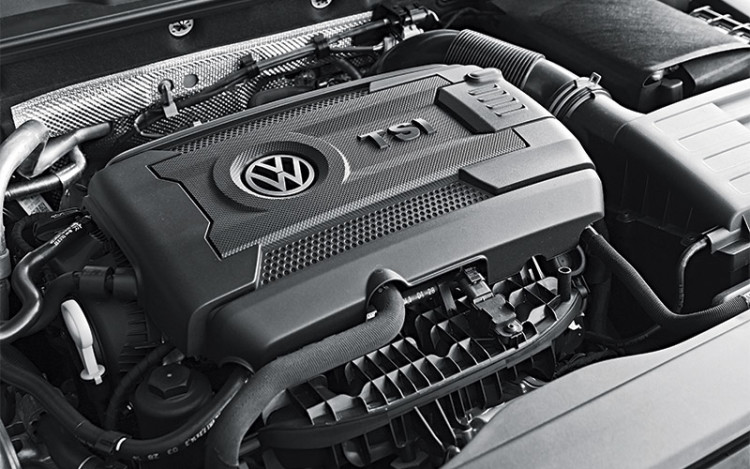 The Individual setting is actually great for most road conditions here, as it lets you leave the dampers in the softer comfort setting, while keeping the engine in the sporty mode. This way, you’re able to deal with any type of surface while maintaining the drivetrain’s responsiveness.

In many ways, the Giulietta QV is the perfect hot hatch. It’s louder, more stylish and more powerful than the German machine. It’s also uncompromising – instead of adapting to the driver, it makes the driver adapt to it. That’s what makes this Alfa so irresistible.

The Golf GTI isn’t as charming as the Giulietta QV, but is more accomplished. It’s more practical on an everyday basis, yet remains nimble and delightful to drive. It’s for these reasons that the letters “GTI” not only make the pulses of enthusiasts race, but also spell “yearning” in their hearts.