The most beloved Volkswagen model in the world is also its most well-known one.

With more than 21.5 million units produced over 60 years, it doesn’t take a petrolhead to figure out that the car I’m referring to is the Beetle.

Enthusiasts and ordinary folks alike were (and continue to be) drawn to the Beetle’s bulbous, bug-shaped body. Though there were numerous updates to the car throughout its life, the Beetle’s iconic design remained unchanged.

But when Volkswagen unveiled the car’s successor – the New Beetle – in 1998, the world was taken by surprise. Although the car’s design is clearly inspired by the classic model, the New Beetle’s cute and cuddly looks polarised opinions.

While many women were drawn to the styling, most men found it to be too feminine for their liking. 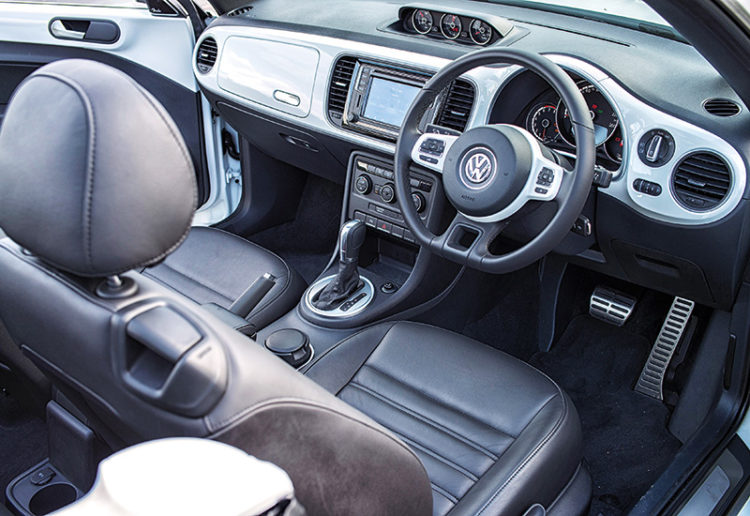 New Beetle Cabriolet’s cockpit is better-looking and more high-tech than the old mode’s.

But love it or hate it, you’d have to agree that strong designs really do tend to polarise opinions.

The New Beetle Cabriolet you see here (lent to us by pre-owned car dealer Mayfair Motoring) is a 2008 model. Yet, nine years on, it is as endearing as ever. I’ve actually come to appreciate the car’s rotundness, “smiling” face and gently curved windscreen.

With the soft-top closed, the New Beetle Cabriolet also has a curvier roofline, which further enhances its visual appeal.

But Volkswagen must have wanted to broaden the Beetle Cabriolet’s appeal (read: recapture lost male fans), because the all-new model looks a lot sportier and more masculine than its predecessor.

The car’s front end, for instance, is wider and more chiselled than before. The windscreen is more rectangular and more steeply raked, and there’s a spoiler at the rear end as well. 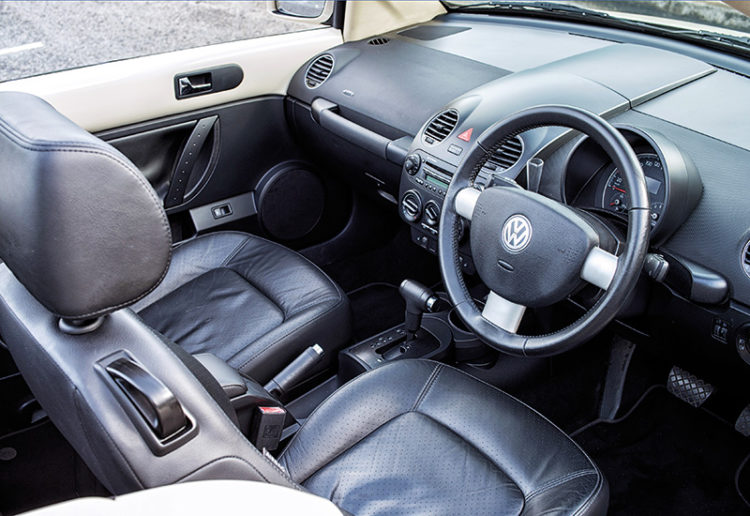 If these elements still don’t convince you about the current Beetle Cabriolet’s machismo, perhaps the stainless steel pedal caps, sleeker steering wheel and the auxiliary gauges atop the dashboard (oil temperature gauge, stopwatch and boost meter) will prove more convincing.

Sportiness aside, the latest Beetle Cabriolet is also more stylish and sophisticated than the older one, with dashboard trim and door panels that match the body colour, and a pretty infotainment unit which is hooked up to a punchy Fender hi-fi system.

Less appealing, however, are the older car’s rotary air-con controls, single climate zone (the newer car has two zones) and semi-automatic roof, which requires you to turn a handle before you can open it, and turn and latch it back to properly close it. Also, the roof can only be operated when the gearbox is in Park.

That said, it takes just 13 seconds to open/close the soft-top, so its operation isn’t as slow as expected.
In comparison, going topless in the new Beetle Cabriolet is a lot more seamless. The fully automated roof takes 9.5 seconds to be stowed and 11 seconds to be raised. In addition, it can be operated while the car is being driven at speeds of up to 50km/h.