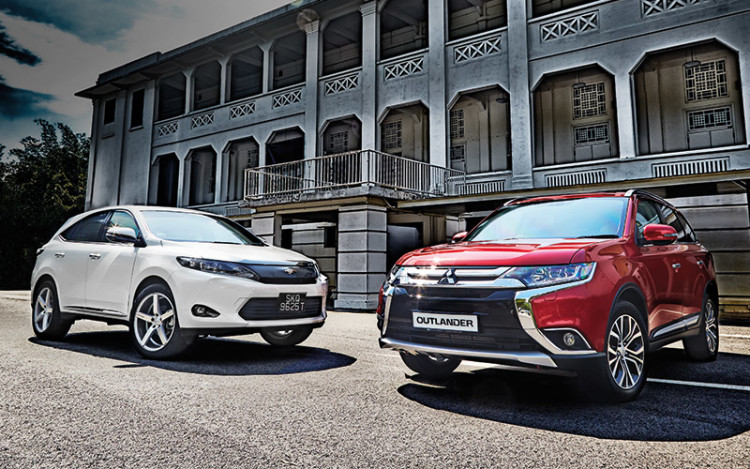 Sports utility vehicles are popular in our Garden City because of their “taller hatchback” practicality and visibility, rugged good looks, outdoorsy image and reputed toughness. Two of the most popular SUV models so far this year are the Toyota Harrier and Mitsubishi Outlander, which meet for the first time in this Torque Group Test.

The 2-litre Harrier is the best-selling Category B car for parallel importers, while the 2.4-litre Outlander is currently the best-seller for the authorised Mitsubishi agent. Prices for the Harrier vary, depending on the dealer/deal and version/equipment, but hover between $140k and $150k (at press time), which puts the car in the same price range as the Outlander.

Both are good-looking machines, but the Harrier is curvier and slightly bigger, while the newly facelifted Outlander is more upright, like a traditional SUV, and has larger rear windows. Both machines have LED exterior lamps that are attractive and effective, but the Outlander has just one reverse light, whereas the Harrier has a pair.

In terms of interior space, the Outlander’s boot is roomier, with 591 litres (in five-seater configuration) versus the Harrier’s 440, although the latter is supplemented by additional storage underneath the boot deck. The Outlander has bigger rear doorbins than the Harrier, but smaller seatback pockets. Both boots have motorised tailgates.

Legroom for rear passengers is equally “long” in both cabins, but headroom for them is better in the Mitsubishi, whose front occupants also enjoy more room for their legs, knees and feet than in the Toyota. Both cars have electric sunroofs, but the one in the Outlander is simpler, with a manual roller shade instead of the Harrier’s powered affair.

The Outlander’s space advantage is boosted by the third-row seats stowed in the boot area. They are only suitable for big kids or small adults, but give the vehicle extra versatility. The Harrier counters with its rear air-con outlets and centre armrest with integral cupholders, all of which are not available in the Outlander.

Both cockpits have easy electrical adjustment for the driver’s seat, but the Harrier adds power-adjusted lumbar support, making the seat, well, more supportive. The Toyota also has a comfier elbow pad atop the console box (which contains more storage space than the Mitsubishi’s) and one-touch operation for all four power windows (the Mitsubishi has this convenient feature only for the driver’s window).

The Harrier’s front seats are more supportive than the Outlander’s and provide a little more rearward travel, while the whole cabin’s fabric/faux-leather upholstery has a funkier design than the Mitsubishi’s plain black leather.

The driving position is more commanding and the views are clearer in the Outlander, whereas the Harrier driver feels more snug behind the wheel and sees more of the stylish dashboard in his field of vision. The Harrier’s gearlever is nearer and has a smoother action, but the Outlander is equipped with paddle-shifters and the Harrier is not.

Those paddles are handy and well-made, but the Harrier’s cockpit as a whole is of higher quality. For instance, its stalks seem tighter, its plastic parts feel more premium and its interior lights use white LEDs instead of (the Outlander’s) ordinary yellow bulbs. Furthermore, the Harrier’s climate control touch-panel is cooler than the Outlander’s conventional panel, although both air-con systems are equally powerful.

Where your fingers grab the Toyota’s internal handles to close/open the doors is lined with soft synthetic leather (the same touch-points in the Mitsubishi are basic plastic). And the keyless-entry “creases” on the Toyota’s external door handles are classier than the Mitsubishi’s rubber buttons. The Outlander has a nicer key fob, though. 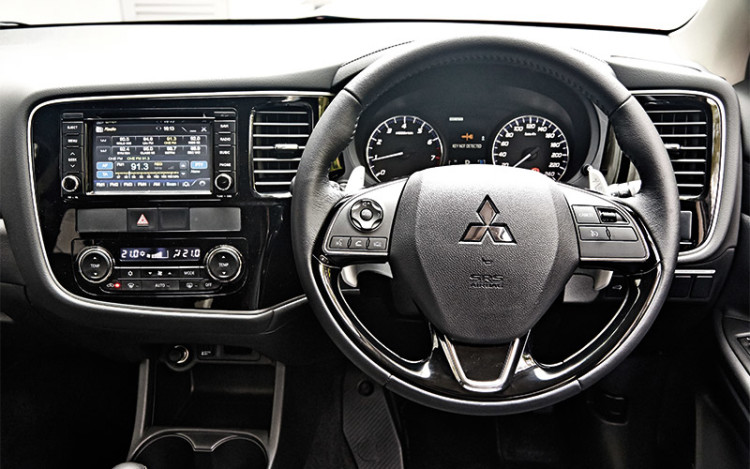 Both engines have pushbutton ignition, but it’s easier to find the Harrier’s. It’s harder to hear the Toyota 2-litre engine working, though, compared to the Mitsubishi 2.4-litre, which is busier and perhaps less well-insulated behind the bulkhead.

The Outlander feels faster and more responsive than the Harrier, and its livelier performance is unaffected by slippery road conditions, thanks to its selectable (three-mode) four-wheel-drive system. The front-drive Harrier is available with 4WD in Japan, but this extra-cost feature is unpopular with price-sensitive parallel importers in Singapore.

Both the Harrier and Outlander ride on tofu-soft suspension (with standard-fit 235/55 R18 tyres and 225/55 R18 tyres respectively), but the former is less affected by big bumps and bad tarmac patches. The Outlander is happier than the Harrier when taking a corner or changing direction, but its steering is as “weightless” as its rival’s and the body roll is noticeable. In any case, both SUVs offer little entertainment value for the driving enthusiast and prefer to cruise gently in comfort.

The tastier oishii sushi SUV in this story is the Toyota Harrier, but the taste-test result swings the other way if we consider the “condiments” from Cycle & Carriage – five-year/unlimited-mileage warranty for the new Mitsubishi Outlander, 10-year/200,000km warranty for its engine, and proper aftersales support.