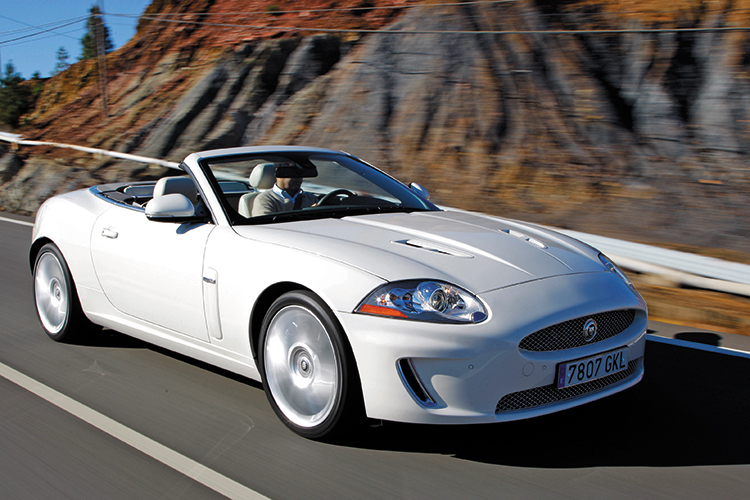 Launched alongside the splendid XFR we sampled last month, the all-singing XKR – a go-faster version of the good-looking XK coupe and convertible – is propelled by a 510bhp supercharged V8.

This powerplant replaces the 416bhp supercharged 4.2 on the old XKR.

The best new feature is the direct-injection system that allows for accurate fuel metering to the nth degree.

The engine could have used a higher compression ratio.

But Jaguar’s engineers thought it better to offer a competitive 510bhp version. 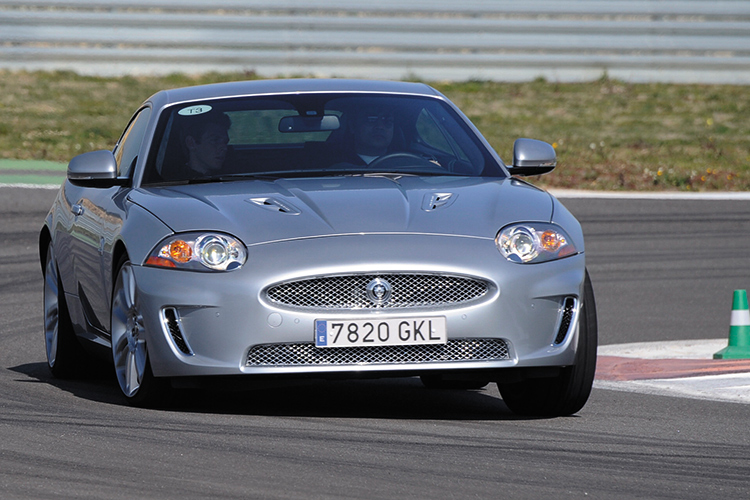 They opted to let the engine accommodate a wider range of fuel quality and operational temperatures instead of seeking the ultimate maximum compression ratio.

The valve timing is now variable on both intake and exhaust cams.

The oil pressure feed comes off the variation in the torque of the camshafts instead of keeping a parasitic load on the main oil pressure system.

So with the dual variable cam component, the engineers could play with the valve timing overlap.

This is not just for maximum torque at full bore but also for light or part throttle operation, to reduce pumping losses.

The result is an efficient and intelligent engine that helps the XKR lower carbon dioxide emissions to 292g/km. 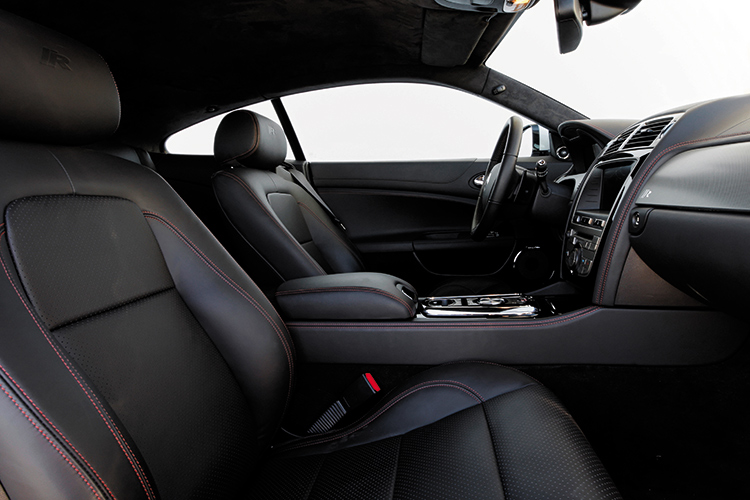 The XKR Coupe’s cabin is snug and packed with luxurious appointments.

Like most modern high-powered engines, maximum torque is managed by the engine control unit to deliver a flat plateau of 625Nm from 2500rpm to 5500rpm.

Controlling the pressure delivered by the new, ultra-quiet Eaton supercharger does this.

Some might miss the mechanical whine, but the XKR lets you appreciate a new exhaust note.

Better than the sound is the newfound alacrity of this engine.

It delivers a snappy throttle response – almost too quick in the “Dynamic” mode, where the heightened responses expose the driver’s shortcomings if the throttle is not modulated just right. 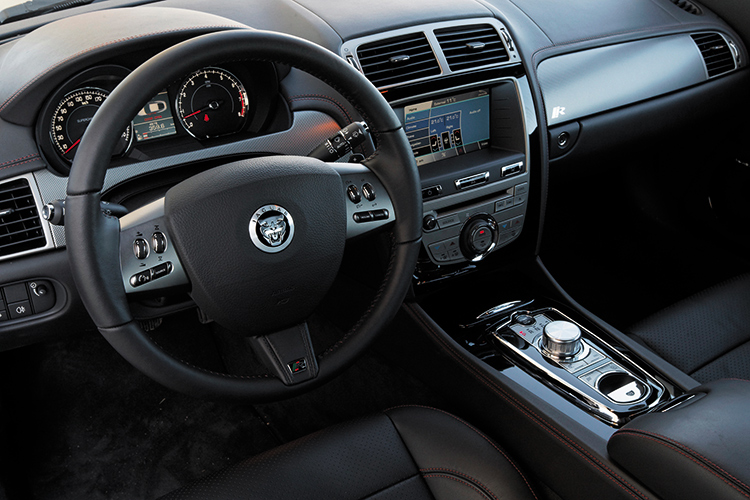 Still, the XKR manages to be decently comfortable with the active suspension making only subtle dynamic changes.

The system seeks to adopt the best setting for the situation constantly, at some 500 times a second.

In any setting, the XKR excites, and part of that impression comes from the new, louder soundtrack of its exhaust system that plays what sounds like a refined multi-cylinder Harley bark, albeit at an octave higher.

The system may seem like a simple component, but the development team – using both computer-aided designs and full-scale trial set-ups – spent a lot of time getting the exhaust aural signature right.

The system also has a special mode called “Dynamic”.

Here, a duct carries the intake note from part of the plenum chamber into the car’s cabin. 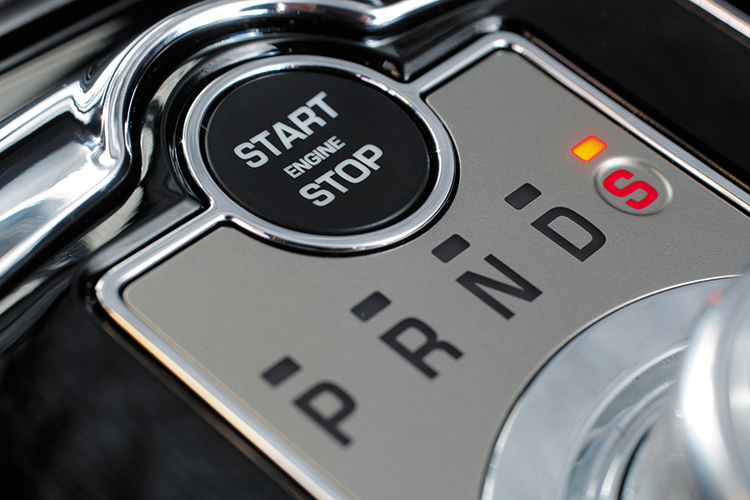 The XKR adopts the cool rotary selector first seen on the XF, and it looks great.

This lets the XKR be neighbour-friendly on the outside but entertaining on the inside.

The new-look XKR possesses a lower centre of gravity and a more focused suspension than the XFR sedan.

So even though it sports the same tyre size as that of the XFR, the XKR develops a higher level of mechanical grip, pressing the driver harder into the side bolsters.

Surprisingly, the Continental 380mm cast disc brakes are up to the task.

They bear the heat without the cost and complication of using carbon ceramic materials.

Equally important is how these brakes behave on the road. 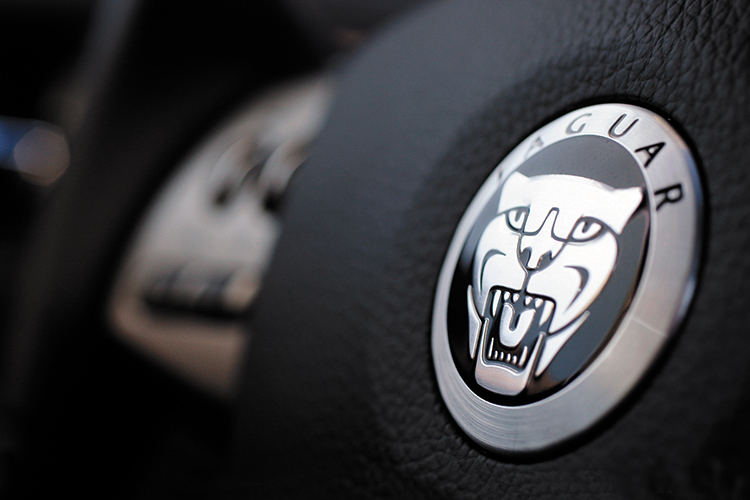 They produce a good, reassuring bite and proper low-speed progression despite their huge size.

The XKR also has a quicker steering rack than the standard XK models, giving the driver a sensation of more immediacy – but not to the point of feeling nervous – at high speed.

The XKR provides far more visceral feedback than does the XFR, as it puts the driver closer to the action with its shorter stroke and firmer suspension.

This makes the XKR convertible more enjoyable than the coupe.

It is also a testament to the rigidity of the convertible’s body (being around 16000Nm per degree, it is almost as rigid as the more compact X-Type).

While the engineers have addressed the most obvious shortcomings of the previous XKR, a host of changes to the suspension was needed as well. 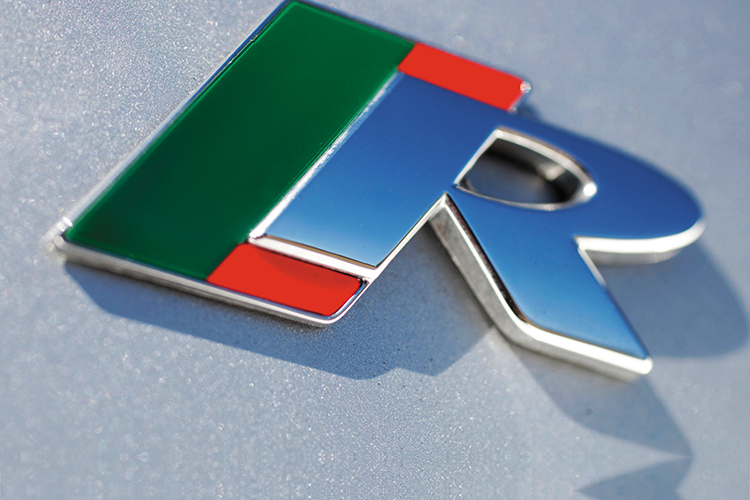 Spring and damper rates had to be uprated, as did the kinematics of the bushings.

This creates a problem, because the car needs to retain a certain degree of comfort and refinement, made more difficult with the car sitting 25mm lower, thus reducing precious suspension travel.

Here’s where the tyres come in. Dunlop has worked hard with Jaguar to satisfy these demands with their SportMaxx tyres.

(Perhaps Dunlop really does understand the characteristics of a British sports car.)

The Jaguar’s automatic gearbox impresses, too. 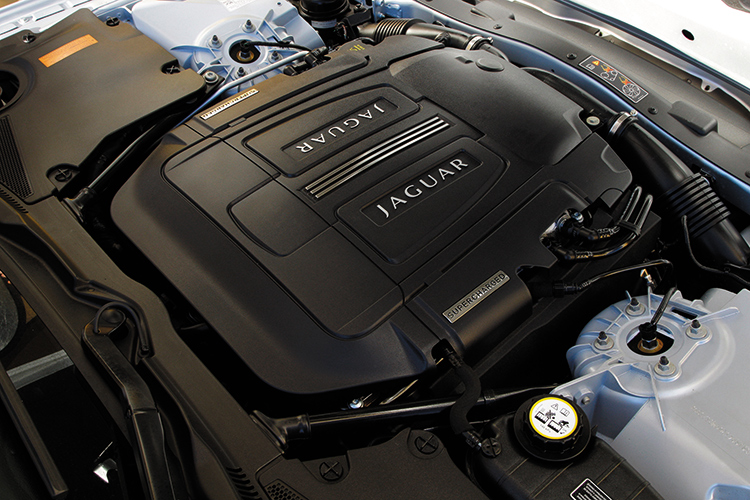 The new supercharged V8 is more free-revving and powerful than the 4.2-litre V8 it replaces.

To get the excellent ZF autobox in the mood, one has to put the gear dial in “Sport” mode.

This, combined with “Dynamic” mode, keeps the engine revs as high as possible.

It also activates the appropriate downshift patterns when one is slowing for a corner to be taken at speed.

The computer senses the braking, steering angle and throttle rate to select the correct gear.

Of course, one can take over the shift duties with shift paddles strategically placed on the steering wheel behind the three and nine position.

To enhance braking, there is also a priming circuit to keep the pads closer to the disc, in order to get immediate bite upon application. 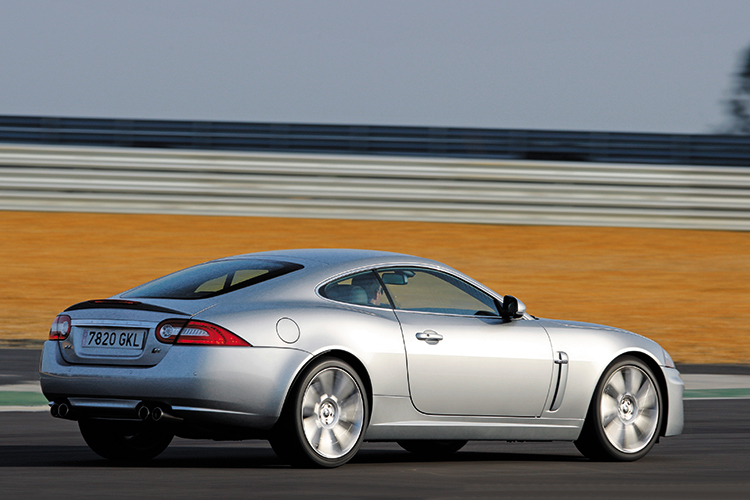 With 510bhp lurking under the hood, obviously things can get sideways in a hurry, especially in the rain.

But Jaguar is acutely aware of this, employing several traction-optimising devices in the car.

The most intriguing is the electronically controlled rear differential that can divert torque completely to either side, depending on traction needs.

The next control layer is the brake-based traction control. Finally, if all else fails, there is the reduction of engine power.

The most severe test of any high-powered, rear-wheel drive comes when the car enters the main road from a side street.

In most high-powered cars, the traction control kills the power very obtrusively as force is applied. 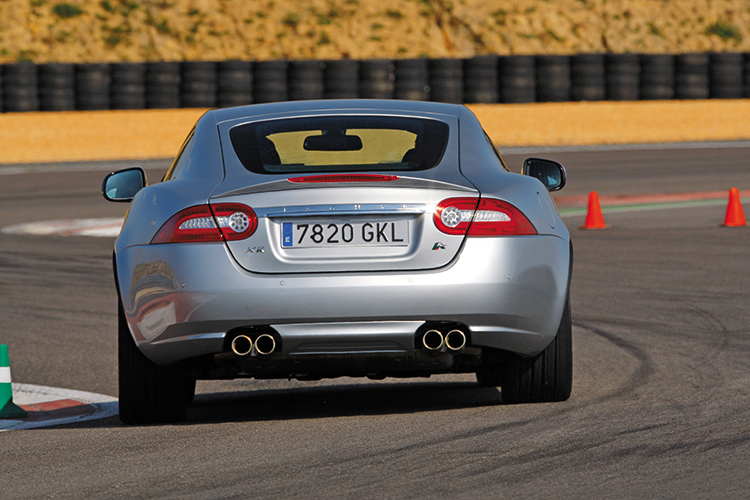 But with the XKR, transition is so smooth and effective that you don’t even realise power has been cut.

And the extent of acceleration possible even in wet weather is simply stunning.

The combination of all these factors gives the XKR a more fluid rhythm than the XFR, whether from braking, turning or accelerating.

The car is discernibly more focused as a driving machine than its predecessor (and probably all the fast Jags of the last 20 years).

But, masochistically speaking, it could probably do with a bit more stiffness.

If anything, it does fuel speculation that Jaguar is returning to its sporting roots, with the rumoured limited edition Lotus-tuned RS XKR set to top both the XFR and the XKR. 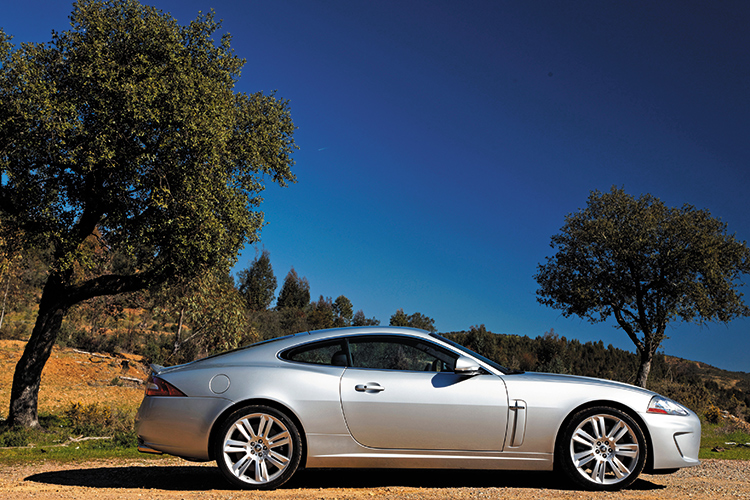 Jaguar XKR-S is a loud and powerful sinful obsession

Jaguar F-Type Roadster is an absolute blast to drive