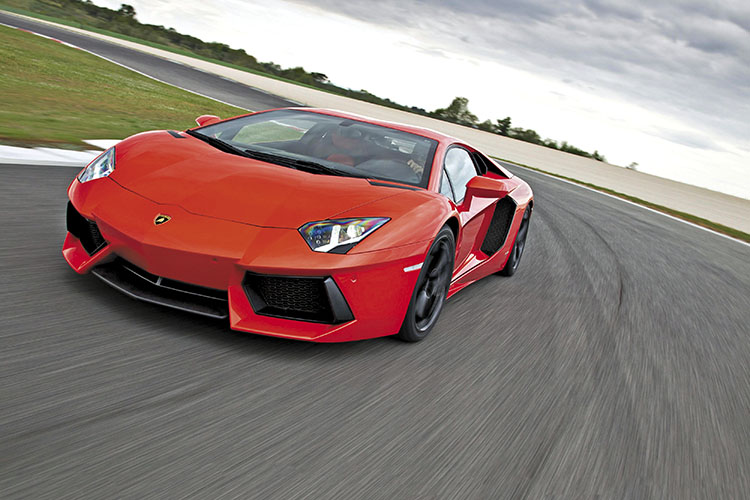 With the arrival of the Lamborghini Aventador, the horsepower war in the supercar segment has reached the 700bhp mark – placing a serious demand on the traction provided by the driven wheels.

The advantage, therefore, goes to all-wheel drive, and in the case of the all-wheel-drive Aventador LP700-4, it puts the power and grip to good effect by sprinting to 100km/h in an amazing 2.9 seconds. (The Bugatti Veyron does it in 2.5 seconds.)

While Lamborghini boss Stephan Winkelmann declares that top speed is no longer a priority, the Lamborghini Aventador can reach 350km/h – a new benchmark for the company (the last Lamborghini Murcielago LP670-4 hits 342km/h).

Lamborghini engineers have focused their efforts on the power-to-weight ratio. To this end, they have employed the ultimate motorsport material – carbon fibre. While arch-rival Ferrari resolutely clings on to aluminium construction, Lamborghini has dived deep into the world of ultra-costly carbon fibre. 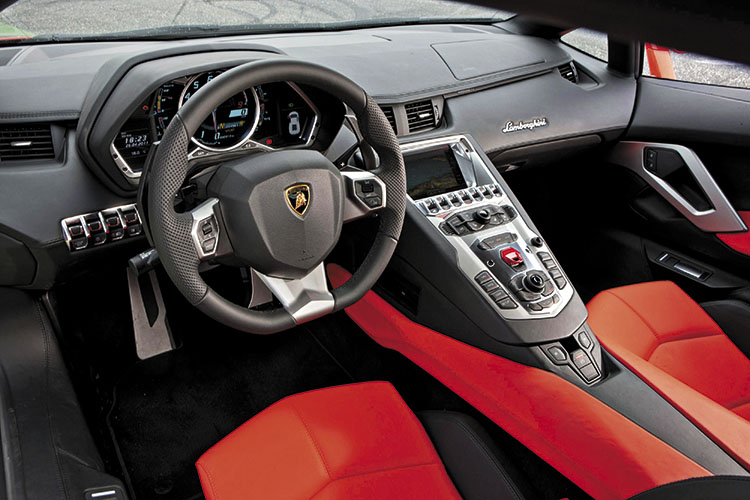 Access to the Lamborghini Aventador’s cockpit is still via scissor doors, but ergonomics, space and driving position are better than in the Murcielago.

This exotic fabric was once exclusive to Formula 1 racing, due to its astronomical cost. But the benefits are too significant to ignore, with light weight and high rigidity both valued attributes in the world of sports cars.

In 2008, Lamborghini started a joint project with Boeing to research and develop new types of carbon fibre construction. Their idea was not to follow others blindly and simply rework carbon fibre, but to create a true carbon fibre monocoque – an industry first.

It isn’t the whole chassis that’s made of carbon fibre, just the passenger cell. But unlike comparable designs, the roof is a rigid, structural part to reduce the need for a large floorpan.

Monocoques tend to be lighter for this reason, as even the skin can be part of the superstructure. The front and rear sections are aluminium frames, bolted solidly to the carbon fibre centre section.

And lest you think this is a potential weak point, the rigidity is a remarkable 35,000Nm per degree, which is exceptional for a car this size. The doors, front bonnet and fenders are made of aluminium to comply with current crash regulations. Audi supplied most of the switches and infotainment, but Aventador interior is otherwise bespoke.

Lamborghini describes the Aventador as a two-generation leap over the Murcielago, a vestige of the old-school Diablo era. The all-new Lambo is a future-generation V12 supercar available here and now – not in a limited production run of a few hundred units, but with the first 1100-plus examples already spoken for, which means the Lamborghini Aventador assembly crew has enough work for the next one and a half years.

Lamborghini has tooled up to make 750 Aventadors per annum. To produce more, the factory has to build a whole new wing and acquire more carbon fibre autoclaves and other expensive manufacturing equipment.

The new V12, like the body and chassis, is built on-site in Sant’Agata and not supplied by Audi (which owns and controls Lamborghini). It retains the same 6.5-litre displacement as the Murcielago, but is now a short-stroke design (i.e. cylinder bore bigger than cylinder stroke) unlike the nearly “square” Murcie V12, which has bore/stroke dimensions of 88mm by 89mm.

This helps to broaden the torque band and allows larger valves to be fitted over the cylinder head. The mean piston speed has also been reduced to ensure that producing 700bhp is less of a strain on the engine components compared to the 670bhp of the V12 from the last LP670 SV.

The exhaust note has changed from the old number’s bassy roar to more of a tenor howl, with a strident high-RPM wail that really sets the senses alight when gunning the Aventador on the tricky Vallelunga racetrack just north of Rome. Oddly enough, this scream is less evident on the outside (though still delightful). It’s much more obvious for the cockpit’s occupants – which is fine, really. 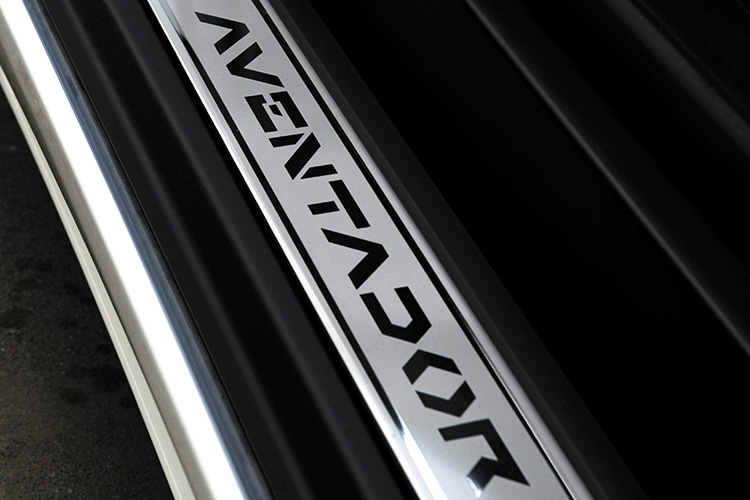 Yet another feature that proves Lamborghini is thinking out of the “box” is the 7-speed ISR (Independent Shifting Rods) single-clutch transmission made by Graziano, an Italian gearbox specialist you will be hearing more of.

Lamborghini decided against adopting Audi’s dual-clutch system because it would be too heavy and bulky for this application. Maurizio Reggiani, Lamborghini’s technical director, also makes the point that DCTs have no shift shock in their attack mode.

This is a necessary characteristic, he says, that “fires up the passion” of the Aventador. The same principle probably applies to the eye-popping, signature orange paintwork of the new monster.

Since the ISR is a dedicated robotised gearbox and not a converted manual transmission like Lamborghini’s existing E-gear system, there will be no three-pedal version of the Aventador. No loss here, since the automaker has received no indent orders for manual models since the Murcielago LP640 was introduced in 2006.

With the Lamborghini Aventador’s monstrous 700bhp, it would probably be best not to change gears yourself. Anyway, even the most skilled driver cannot beat the 50 milliseconds shift time of the ISR, which is almost as rapid as an F1 gearbox and considerably faster than the 150-200 milliseconds required by E-gear. 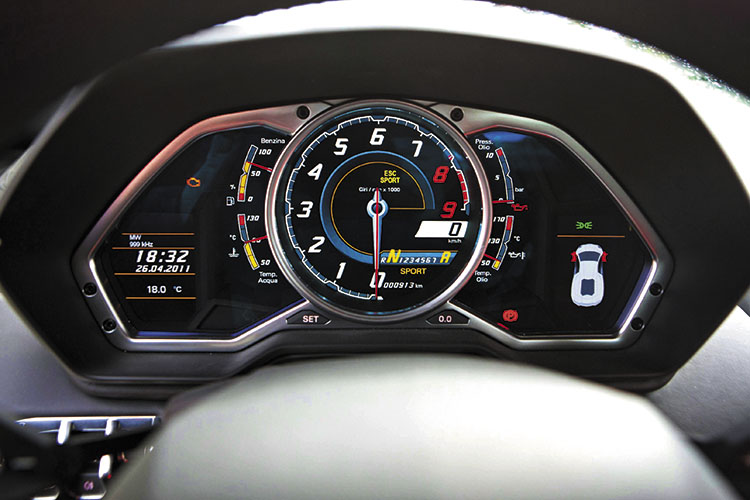 Digitised instruments are in tune with the high-tech nature of the beast.

I’m happy to report that the shift shock mentioned two paragraphs ago is indeed available, but only with max-throttle gearchanges in the Corsa drive mode. This hardcore configuration also sets the parameters for the “stability nanny” far outside the standard envelope.

It really takes some abusive driving to get to the point where the ESP starts to kick in. Most of the tight, second-gear corners will have the Aventador in mild understeer and it will only step out into slight oversteer with early application of wide-open throttle.

Higher-speed, third-gear corners will have the car moving into a neutral attitude, with a touch of oversteer, just by backing off halfway through. This requires some corrective inputs by the driver as leaving electronic intervention this late means the handling would already be out of shape and need active assistance by the electronics.

Selecting Corsa also implies some level of skill on the part of the “pilot”. To provide even more driving involvement, Corsa also sets the suspension to the firmest damping, sharpens the throttle response and firms up the steering. 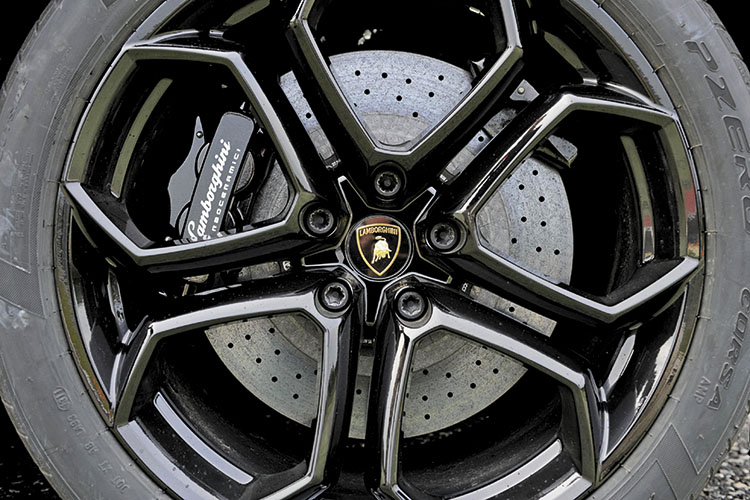 Powerful carbon-ceramic brake discs measure a massive 400mm in front and 380mm at the rear – the same as the mighty Bugatti Veyron.

The less “involving” Sport mode is pretty adept too, even on a racing circuit. The steering is not as heavy compared to Corsa and the gearshifts are not so brutal, which is ideal for those with a degree of mechanical sympathy.

In this mode, the ISR behaves like a dual-clutch device, offering smooth, speedy shifts between gears, and it works as both a “plus-minus” and auto, unlike the fully manual Corsa mode.

The ESP is also made quite liberal, allowing for some tail-out antics. Because Sport is still quick but less frenetic than Corsa, the driver can relax a bit even at a good clip (although the lowered excitement might not appeal to adrenaline junkies). The suspension remains firm in Sport and might be too stiff for city driving.

Strada is the normal/default mode and it has the kindest characteristics, with light steering and sweet shifts. Its main feature is the relatively comfortable ride. The in-board pushrod suspension is another groundbreaking feature of the Aventador. 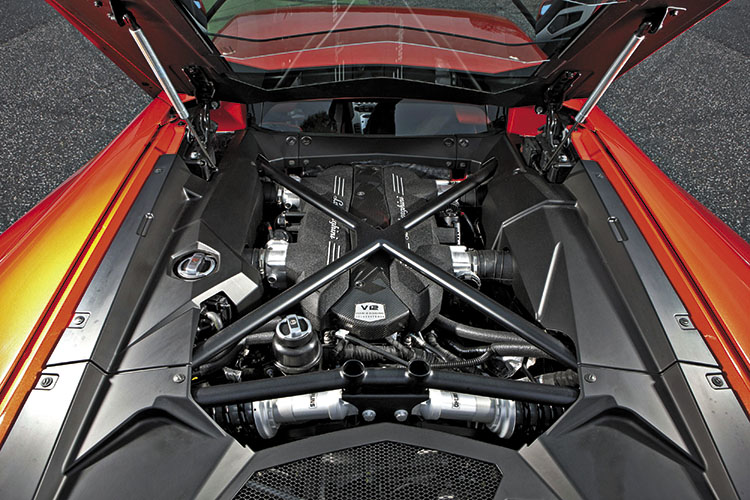 Lamborghini Aventador’s naturally aspirated 6.5-litre V12 pulls like a herd of angry bulls and sounds like a controlled rampage.

This complicated, F1-inspired system reduces unsprung mass as the dampers and springs become part of the chassis, and allows for superior suspension optimisation vis-a-vis conventional methods.

Together with the longish wheelbase and generous wheel tracks, the setup offers superb stability and control without the need for sharp spring-and-damper rates. In fact, they have been specially reduced for this particular application, which explains the relative degree of ride comfort.

Though the Lamborghini Aventador launch was a track-only event, we took the opportunity to use the service road and pit lane to garner some impressions of the car’s ride quality.

Thanks to its super-rigid chassis, the Aventador stays totally composed even in Corsa, but it’s a tad too jiggly for the occupants. Even in the less manic Sport mode, the ride over poor road surfaces might be too firm for most drivers. 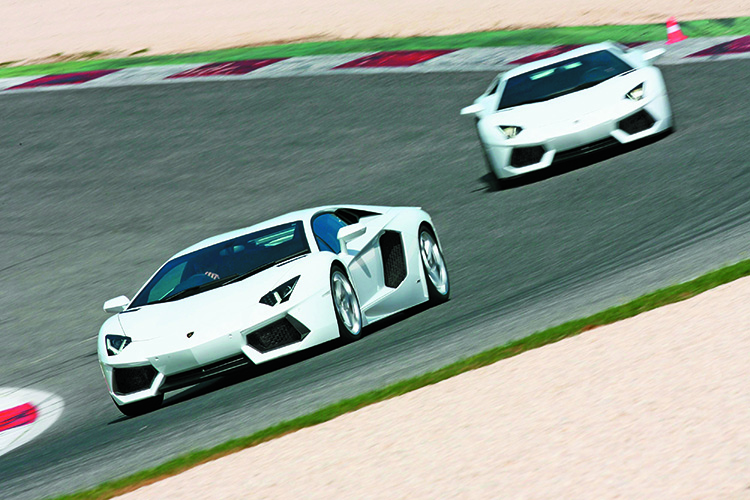 Lamborghini Aventador is amazingly agile and surprisingly easy to hustle, but its preferred playground is a racetrack.

Strada is like a welcome relief, and to be honest, I do not really feel the car is compromised by this mode in terms of outright controllability. Even in “soft” Strada mode, the Aventador can be thrown round the circuit with great verve.

One major reason for this is the low kerb weight (for a luxurious V12 supercar) of 1575kg dry. Tanked up and ready to go, it is possibly 1675kg or so.

Much of the Aventador’s cornering prowess is due to its Pirelli P Zero Corsa Asimmetricos. These tyres deliver a leech-like grip and hold up very well after thirty hard laps on Vallelunga Circuit.

After some hot runs, they become sticky like scotch tape, giving the Lambo a confident glued-down feel when tackling even the craziest corners. With such unerring grip and positive straight-line tracking, the Aventador blesses the driver with a confidence-inspiring feel. 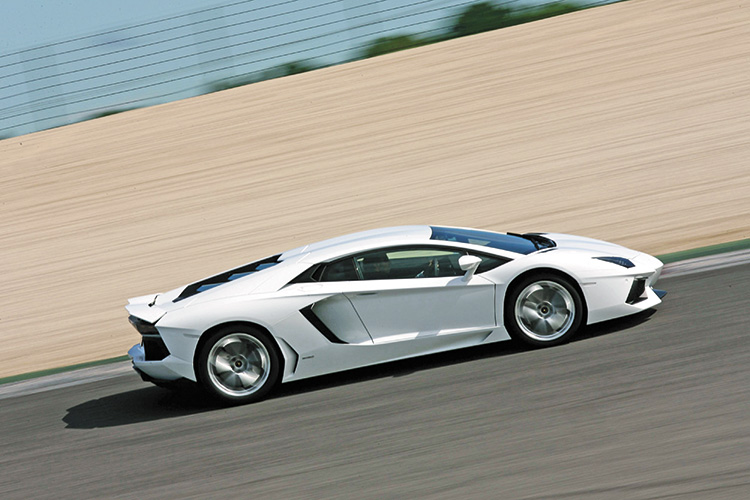 This bruiser is brutally accelerative and its natural cruising speed is at least 300km/h.

Of course, the aerodynamics also assist here, although Lamborghini admits that the Aventador was first styled for awe, then tweaked for aero. Just watch the rear wing rise at 120km/h in unison with the side air pods, the latter capturing more air for the engine.

The active aerodynamic spoiler has two settings – at medium speeds, it has an angle of eleven degrees for extra downforce, and when one approaches 300km/h, the wing assumes a shallower rake of four degrees to reduce total drag.

A styling feature back there are the tail-lamps, which are not visible when viewed standing close to the Lamborghini Aventador because of their steep rake. This also lends it a pronounced Kamm tail effect, whereby the rear diffuser blends the escaping exhaust gases with the rear airstream to move the centre of aerodynamic drag towards the back and improve downforce.

Make no mistake – the Lamborghini Aventador is not for the faint-hearted and it makes no apologies about this. It is a truly super supercar and bravely takes up the baton where the Murcielago LP670 SV left off. 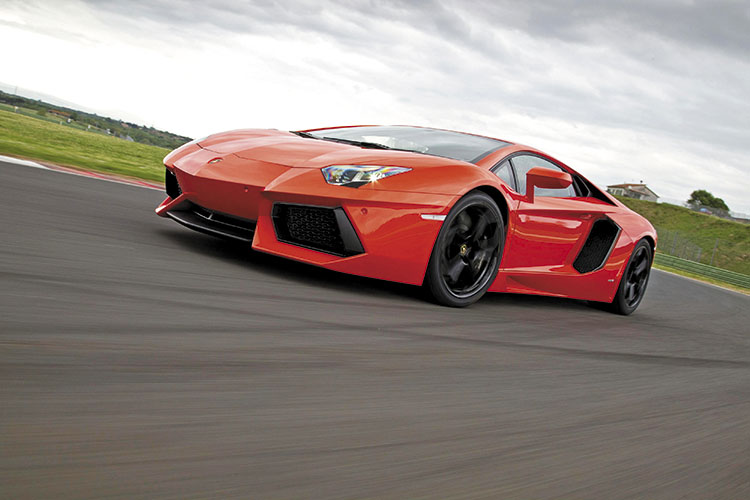 There is a user-friendly side to the fearsome performance and aggressive character.

With the new 700bhp V12 and ISR gearbox transmitting the massive power through an active Haldex IV AWD transfer case, the century sprint time is 2.9 seconds, which dips under the magic 3-second barrier.

Yet, despite the fearsome performance and aggressive character of the Lamborghini Aventador, it has a user-friendly side that appeals to a wider worldwide audience, with the “gentle” Strada mode being key to this.

Even if you have the requisite $1.5 million to spare, you still need to take a queue number as the newcomer is sold out for 18 months (at press time).

Unlike the courageous bull that the Lamborghini Aventador takes its name from, Lamborghini’s bravest-ever model is a surefire winner that will survive to fight – and win – another day. 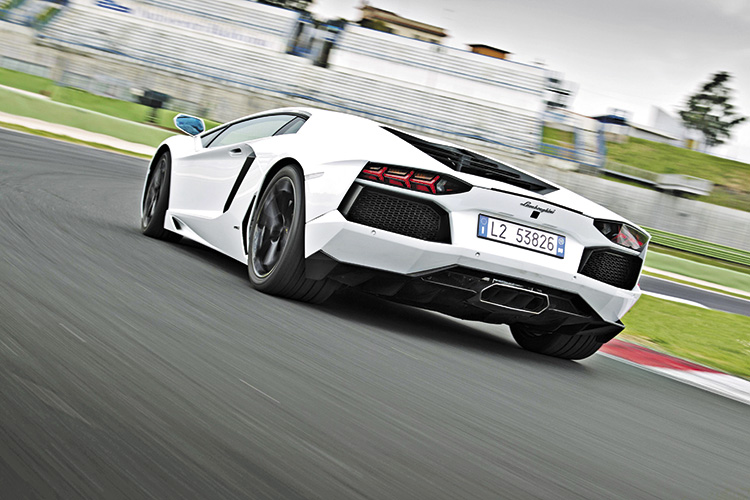 Check out the successor to the Aventador, the Lamborghini Aventador S