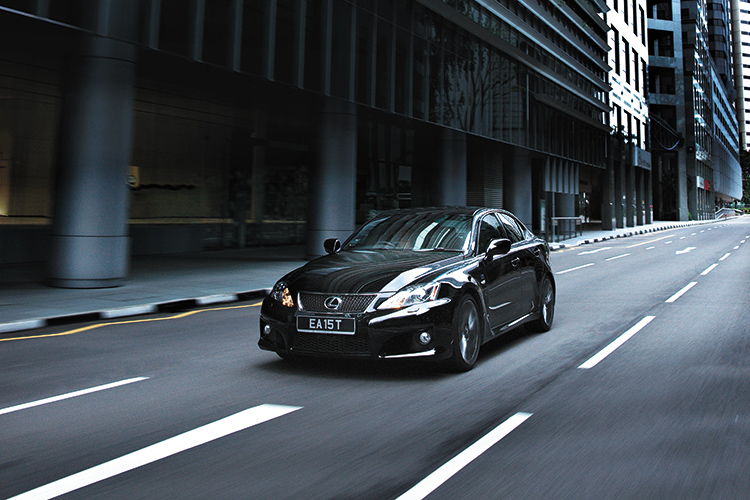 The Lexus IS F delivers old-school performance, with none of that new-age hybrid nonsense.

For a car brand as cutting-edge as Lexus, its IS F is surprisingly old-school in concept. Shoehorn an oversized, naturally aspirated V8 into the engine bay of a smallish saloon, hook it up to the rear wheels, and stand back for the inevitable fireworks. 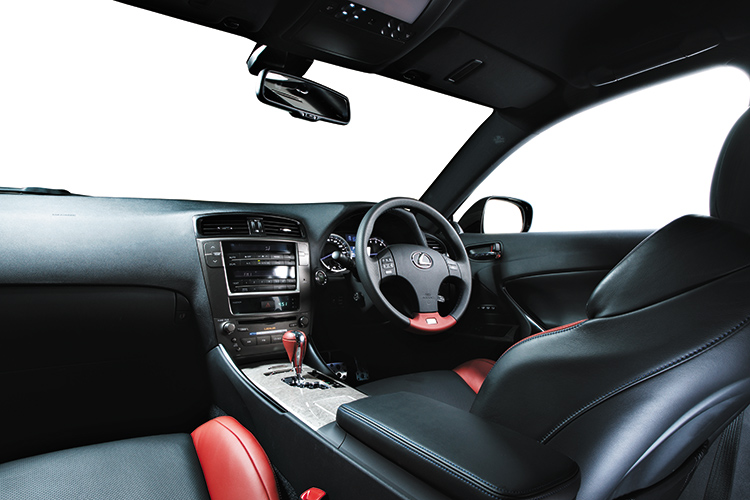 And great effort has been made to visually differentiate the F from the rest of the IS range. A higher bonnet line, flared fenders, a protruberant front bumper incorporating aggressive intakes, air vents set into the trailing edge of the front wheel arches, 19-inch rims and four-tip, diagonally mounted exhausts mark it out as something special. Oddly though, it’s possible to miss these visual cues at first glance, especially if the vehicle is in a dark colour like our black test car. A passing IS F certainly looks more purposeful than a standard IS250, but you’ll need a second (or third) take to clock the specific differences.

From the driver’s seat, it is not immediately apparent you are in something with super-saloon credentials, either. The cabin is stock IS save for some new trim finishes, blue pointers for the speedo and tacho, and thickly padded front seats with more pronounced bolstering. Unlike the normal IS, the F is a strict four-seater, with the centre portion of the rear seat acting as a storage compartment. To tart things up some more, Lexus has also used a rather loud two-tone trim on the seats (black and red in our test car). 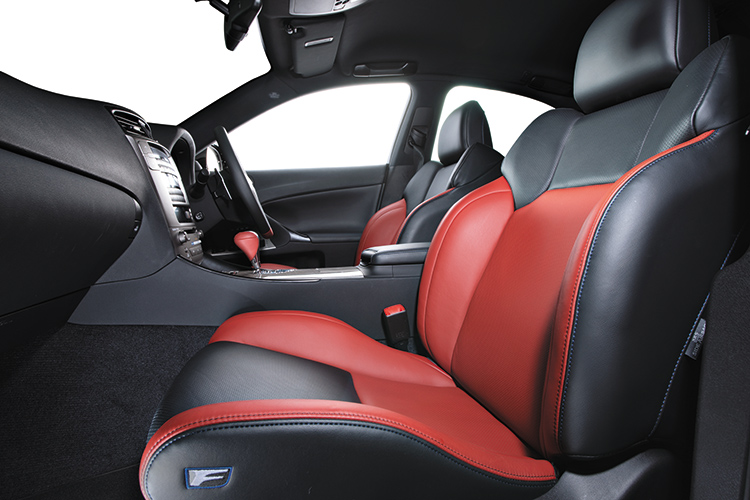 Start it up, and there is a bassy purr from the exhaust – not so loud as to be intrusive, but certainly distinctive enough to prickle the neck hairs. But there isn’t any corresponding aural drama when you move off – the IS F feels unmistakably Lexus-like at low speeds, wafting about without fuss, its engine delivering seamless, effortless forward motion without feeling particularly potent. The long-travel throttle pedal doesn’t help make things exciting, and the gearbox goes about its ratio-shuffling business unobtrusively.

That gearbox, incidentally, is an 8-speed automatic – proudly touted as a world-first when the IS F was launched internationally in 2008. But given that the car has taken over two years to reach our shores, it’s been beaten to the punch locally by certain Audis and BMWs as well as Lexus’ own LS460, which all boast similar ratio counts. 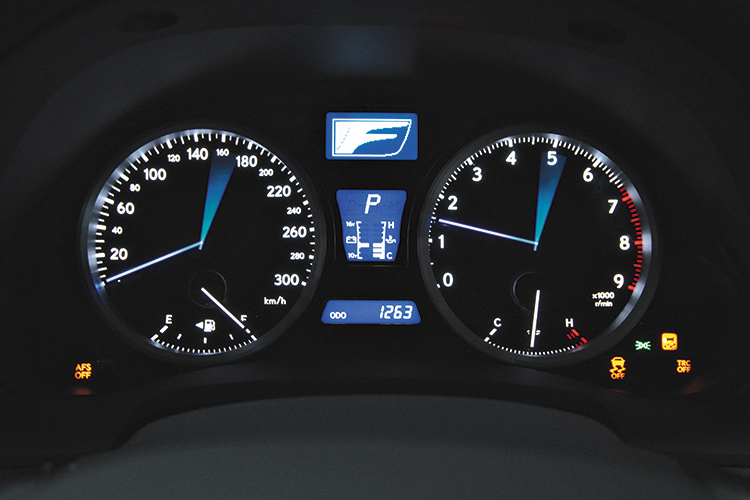 Features unique to the Lexus IS F include blue LED-backlit needles, a 300km/h speedometer, a digital oil temperature gauge and a big “F” logo displayed on start-up.

The electric power steering is lightish, consistently weighted and direct enough but not especially sharp, and while there is some feedback through the rim, there isn’t a lot of it. The three-spoke wheel feels and looks almost identical to the one in the regular IS, and the steering rack isn’t especially quick-geared, so there is a fair bit of arm twirling on tight bends. Overall it’s effective, but not particularly involving.

So you push the car harder to try and unlock the excitement which must surely lurk beneath that beefy bodywork. And indeed, the V8 does come alive at 3800rpm – its muted, polite voice suddenly and unexpectedly turning into a throaty, intense bellow as a valve opens and the engine’s secondary intake channel comes into play. There is a corresponding kick in acceleration too, almost VTEC-like in its clarity and intensity as the rev counter whips round to its 6800rpm limiter. 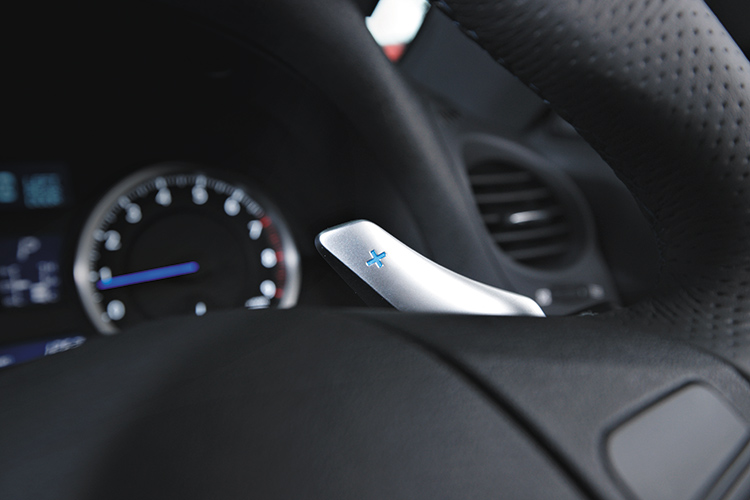 Apart from 417bhp, that 5-litre V8 also puts out an impressive-sounding 505Nm of torque, although it comes as a bit of a surprise that while the IS F is effortlessly brisk at low to medium revs, it doesn’t feel more muscular. A closer look at the specs reveals the answer – maximum torque comes at a high 5200rpm, so despite the large-capacity powerplant, you still need revs for it to really deliver. That 4.8sec 0-100km/h time is believable, though – once on song, the engine really does hurl the compact Lexus forward with unbridled ferocity.

Remarkably in an age when even a mainstream hot hatch like the Golf GTI has electronically adjustable damping, the IS F comes with one suspension setting – that’s it. No Comfort, Normal and Sport options here. This means a harder task for the chassis engineers to tune that one setting to be adept in all conditions, and in this regard they have done a pretty sterling job. 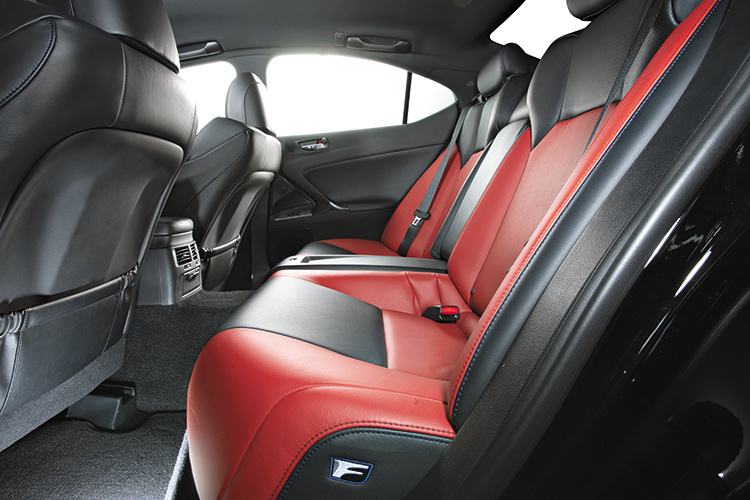 There is obvious Lexus DNA in the ride quality, which is very acceptable for a sports saloon. It’s much firmer and noticeably busier than a stock IS250, of course, but surface sharpness is ably rounded off and it remains very composed unless the road is very badly cratered or there are severe undulations, in which case it can run short of suspension travel.

Round corners, the car stays on an even keel, although it doesn’t quite resist roll as stoutly as an M3 or an RS5. Pushed to its absolute limits, the IS F also lacks, by the smallest of margins, the utterly resolute body control of its two primary rivals. The two Germans goad you into pressing harder and going faster, while the Lexus faithfully and uncomplainingly obeys your commands but hardly incites further exploration. Then again, that is probably the trade-off for its more civilised ride, coupled with the fact that the BMW and Audi both have the luxury of switchable damping, while the Lexus’ fixed setup is of necessity a compromise, albeit a well-judged one. 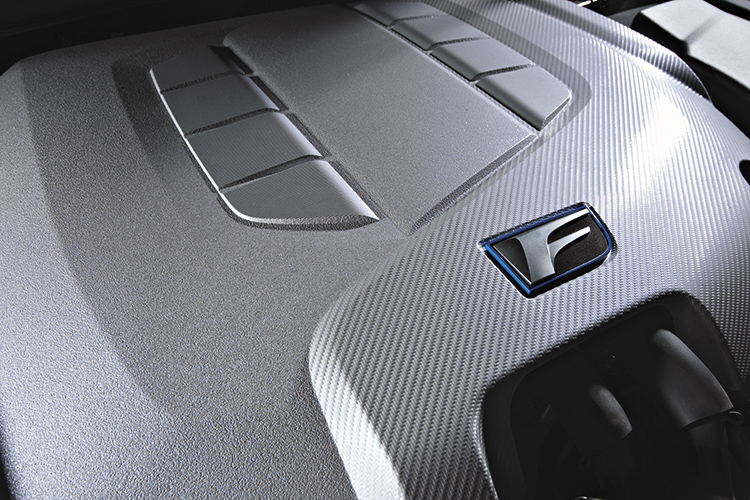 Grip is very good on the Goodyear Eagle F1 tyres (modest 225-section at the front, but full-fat 255s at the rear), but with over 400bhp fed exclusively to the rear axle, power oversteer is a frequent affair, even when you’re not trying to provoke it. The traction control and stability systems (Vehicle Dynamics Integrated Management, or VDIM in Lexus-speak) keep things in check, of course, but they can be turned down or completely off (via a poorly sited switch hidden by the steering column) for some lairy tail-out action if you’re in the mood. With VDIM off, every U-turn and roundabout is an open invitation to exploit that hooligan rear end. 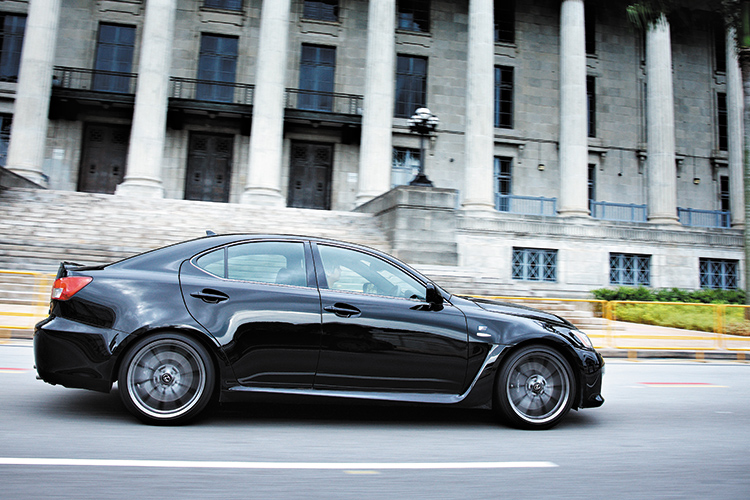 Nudge the gearlever into its M plane (for manual override), and the gearbox takes on a sportier dimension. Gone is the relaxed slurring of one ratio into the next – each gearchange is faster and more discernible, and you can hold the engine at the 6800rpm limiter without the ’box shifting up unless you tug the right-hand paddle. And on high-rev downchanges, you get a lovely engine blip, too.

This loony Lexus is a real shot in the arm. Able to waft and cosset almost as well as any other IS saloon, it also turns utterly manic when you wake that engine. While it cannot quite deliver the intense involvement of its obvious German rivals, there aren’t many cars around with the IS F’s remarkable duality of automotive character. 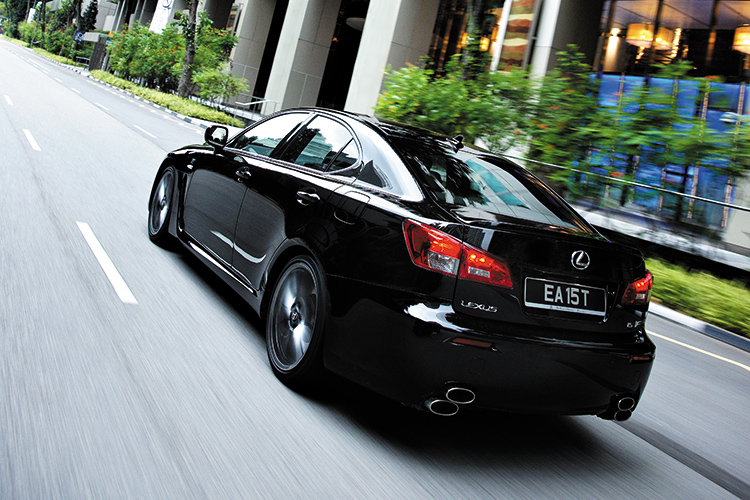 The Lexus IS F is currently unavailable, but you can check out the turbocharged Lexus IS300, V8-powered Lexus GS F and Lexus LC500 models

BMW M4 and BMW M3 driven on the Portimao Circuit