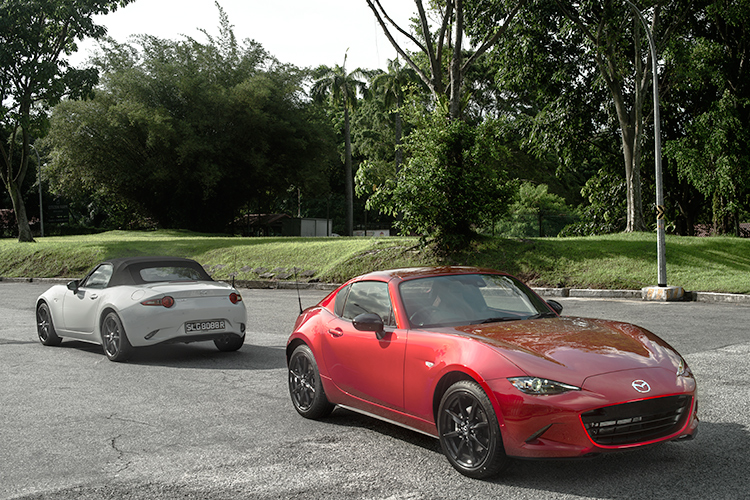 My regard for the Mazda MX–5 is no secret. On these pages I have waxed lyrical not once, not twice, but three times about how enamoured I am by my own example.

Because what greater expression of admiration from a car writer is there than for him to buy one himself? My editor must be sick of this unimaginative repetition by now.

For posterity, however, let us briefly recount the reasons why the Mazda MX–5 has stolen my heart and is gambolling around the yard yipping away with it laughing gleefully in tow.

The MX–5 is a hyper-caffeinated corgi puppy. It rummages and zips around and brings simple, unadulterated, unpretentious joy in ways so few, if any, other cars can. 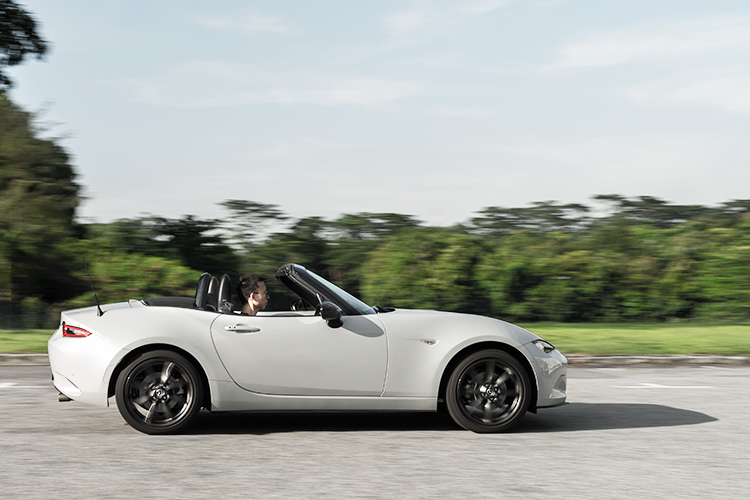 So light, so small, so spirited, so much incredible fun. If we were in the business of handing out star ratings, the ND1 Mazda MX-5 from 2016 would have, without a sliver of doubt, emphatically, utterly deservingly, and proudly, get almost five stars.

Wait. What? ALMOST five? Yep. I would leave one ear of the last star out on account of the engine.

Everyone knows that the Mazda MX–5’s creators were so obsessed with the conceptual ideal of purity, the idea of less is more, that the car’s ultimate expression is actually with the weaker 1.5-litre engine.

Allegedly, that feisty little firecracker is truer to the spirit of the singing sports car. The 2-litre was merely pilfered out of the Mazda 6 family sedan to appease fat Americans. Fair enough.

It pains me to admit so, but it does show a little bit. 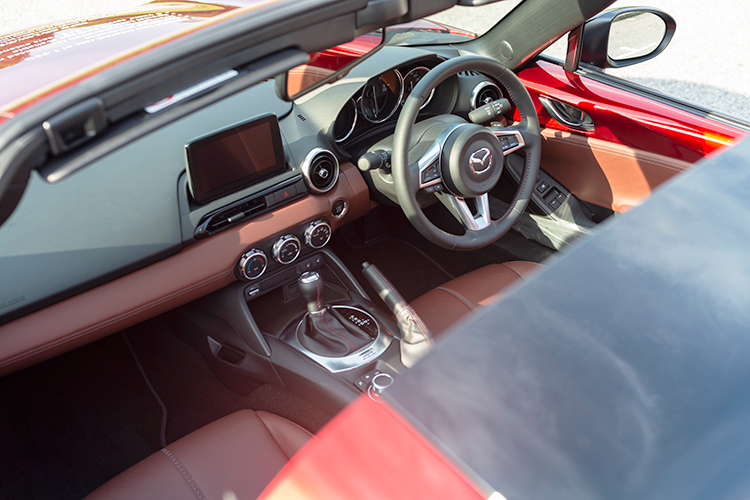 Sometimes, especially with the roof up causing an acoustic hardening of an already uninspiring soundtrack, the Mazda MX-5’s motor can feel slightly reticent to shriek all the way to its not exactly stratospheric 6800rpm redline.

Like in that slightest flash of hesitation you detect in your wife’s eyes when you suggest watching Star Trek, you suspect it is merely humouring rather than eagerly obliging you. It is quick and powerful enough, no doubt, but just slightly below the supreme spiritual plane of the chassis.

Hence an engine upgrade, by way of a comprehensive finessing of critical parts including, crucially, the use of lighter internals, is the only dynamically consequential change for the facelift. 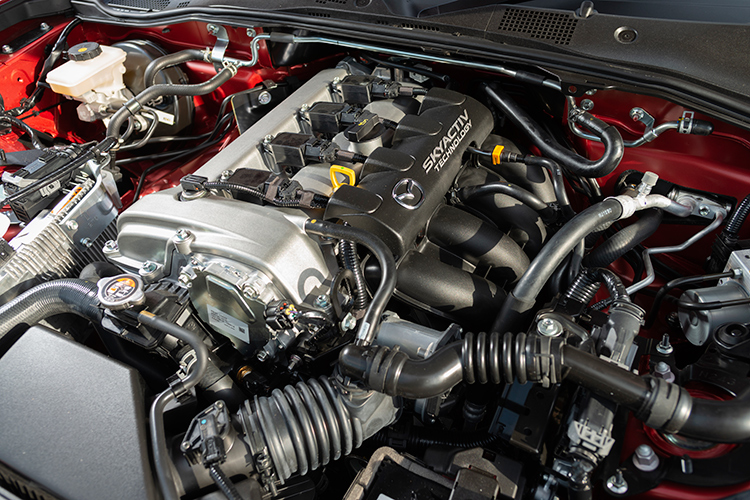 MX-5’s 2-litre engine now has 23hp and 5Nm more than the pre-facelift model.

Oh, and the addition of a wee bit of telescopic adjustment to the steering wheel. You can assume the car steers, stops, and turns in exactly the same loveable laugh-out-loud way.

Being a man of science, I must admit that here are two cars at the very diametric opposite ends of the Mazda MX–5 spectrum. The older car is a soft-top in manual form, going up against a hard roof “Retractable Fastback” with an (ugh) automatic transmission.

A bit of internal “multivariate analysis” thus has to be applied when scrutinising the two driving experiences to isolate subjective engine performance.

How do the cars differ in Singaporean conditions?

In the business of screaming around properly windy stretches of road, of which we have a grand total of two, the new Mazda MX-5 RF does noticeably well. With 23 more horsepower (mostly at the pointy end of the tachometer) which now extends to 7500rpm, means the motor now begs you to wring it out. 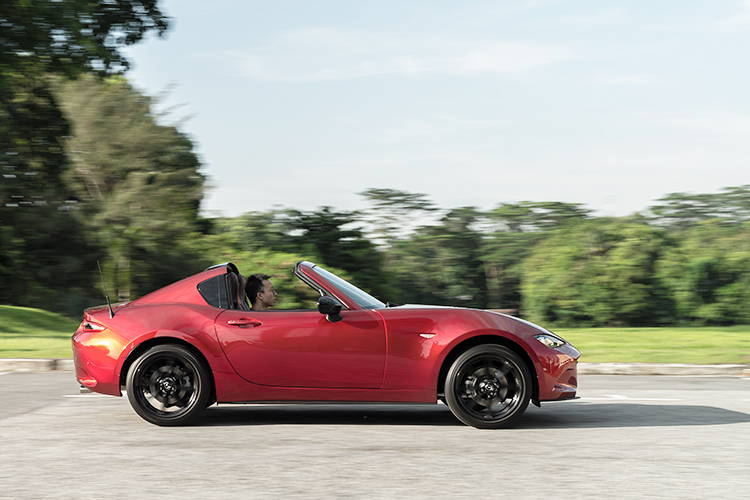 Breathing more freely, it offers more reward for squeezing every last drop of performance from the car, even if the accompanying tune still doesn’t raise goosebumps.

Lower down, which is arguably more consequential at the moderately brisk speeds Singaporean sports car driving entails, the difference is less marked.

There are three things we call upon engines to do most in Singapore.

First, there is the oh-no-the-light-is-yellow bolt of desperation. Second, once the road-hogging Avante has finally got out of the way, is the sixth gear amble back up to PIE cruising speed. 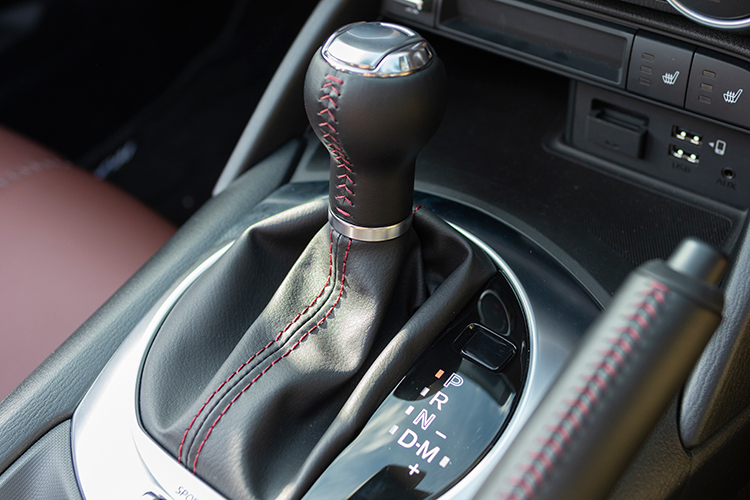 Rounding off the sprinting repertoire is what I like to call the 2000-5000rpm Moulmein-to-Scotts-via-Newton-Circus joust of fire.

New engine, revelatory new speed? Not in these circumstances. There is an addition of 5Nm of peak torque delivered 600rpm lower at 4000rpm. Those are not big numbers, and I struggled to discern a meaningful difference when not absolutely caning it.

So this new Mazda MX-5, then. Better than the old one, better than mine. Assuming I could have a manual soft-top version as God intended. Should you buy one right now if you were in the market for a pure little roadster in which to interrogate the visceral sensations of mechanical interaction? Yes. 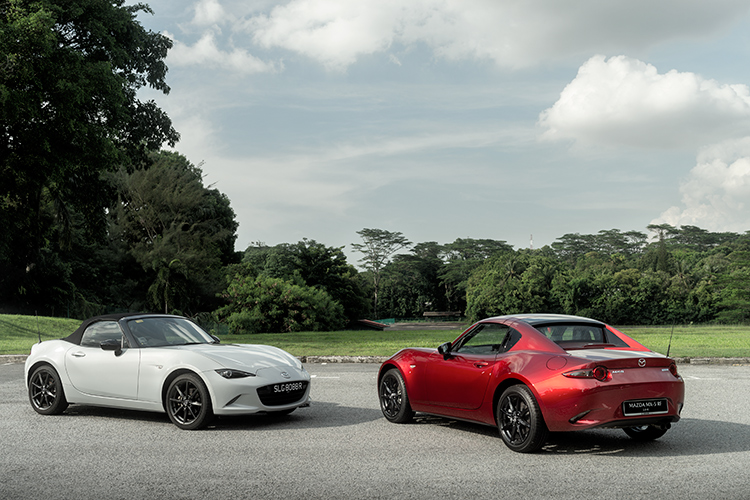 Should I rush out and upgrade from the Mazda MX-5 ND1? No. This is a worthy technical achievement and a testament to Mazda’s admirable commitment to the sports car cause.