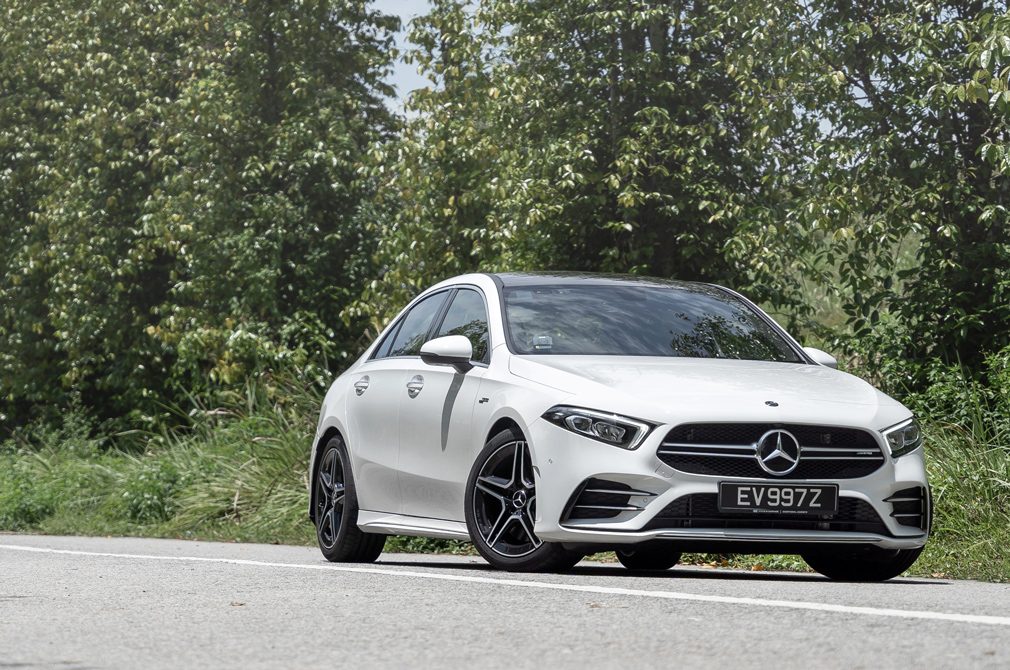 A sleeper car is one of the most fun vehicles you can get behind the wheel of, especially if it is a saloon.

If you’re not familiar with the term “sleeper car” or “Q car”, it refers to innocuous-looking models that actually have stonking performance. They take others by surprise when their power is unleashed.

The Mercedes-AMG A35 Saloon is one such model. AMG is Mercedes-Benz’s go-faster division, responsible for creating hairier versions of the brand’s regular cars.

However, despite the AMG badge, the A35 is “AMG lite”.

To enthusiasts, only AMG models whose engines are built by a single engineer, qualifies as a “true AMG”. Pop open the bonnet of an A45 or C63 and the engine cover features the name and signature of the engineer who built it.

Now, the A35 Saloon might not have this, but that doesn’t mean it isn’t a hoot to drive. 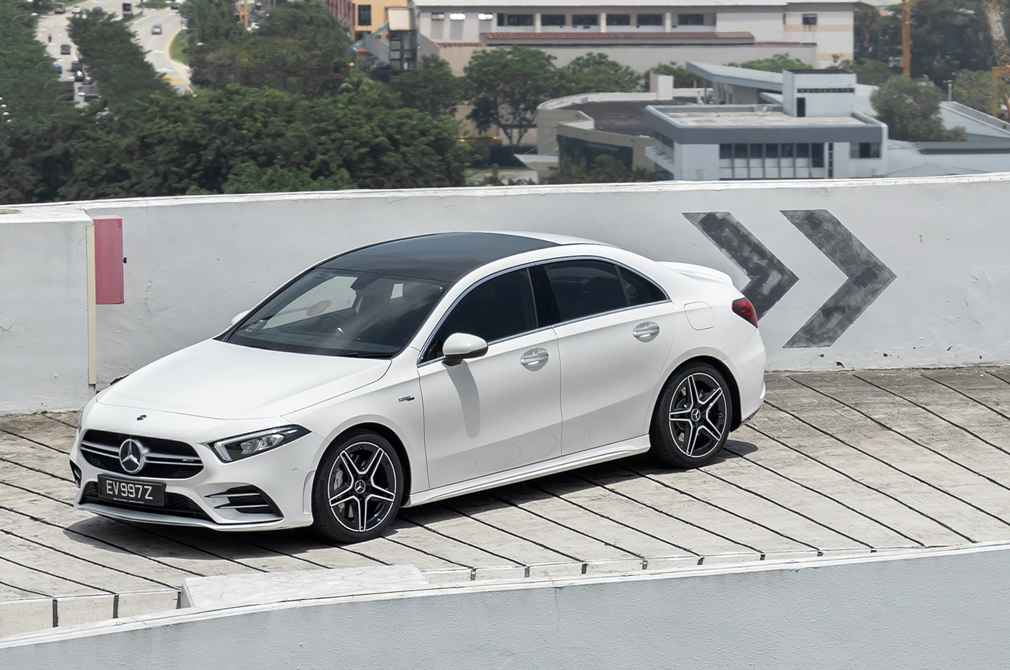 SUBTLETY: THE NAME OF THE GAME

The Mercedes-AMG A35 resembles an A-Class Saloon with the AMG Line specification so much that you’d be forgiven for thinking that it was one. Even the wheels of both models are similar in size and design.

The biggest difference between the A35 and the A-Class is the grille. The former has the sportier two-louvre design, while the latter has the familiar “diamond-studded” one.

Now, look behind the wheels and you’ll see beefier brakes with “AMG” instead of Mercedes-Benz callipers. All four rotors are also cross-drilled, unlike the ones in the regular A-Class Saloon.

At the rear, the A35 has a pair of round tailpipes, whereas an A-Class has trapezoidal exhaust finishers. Unless other drivers recognise these features, the A35 driver will easily slip under their radar. 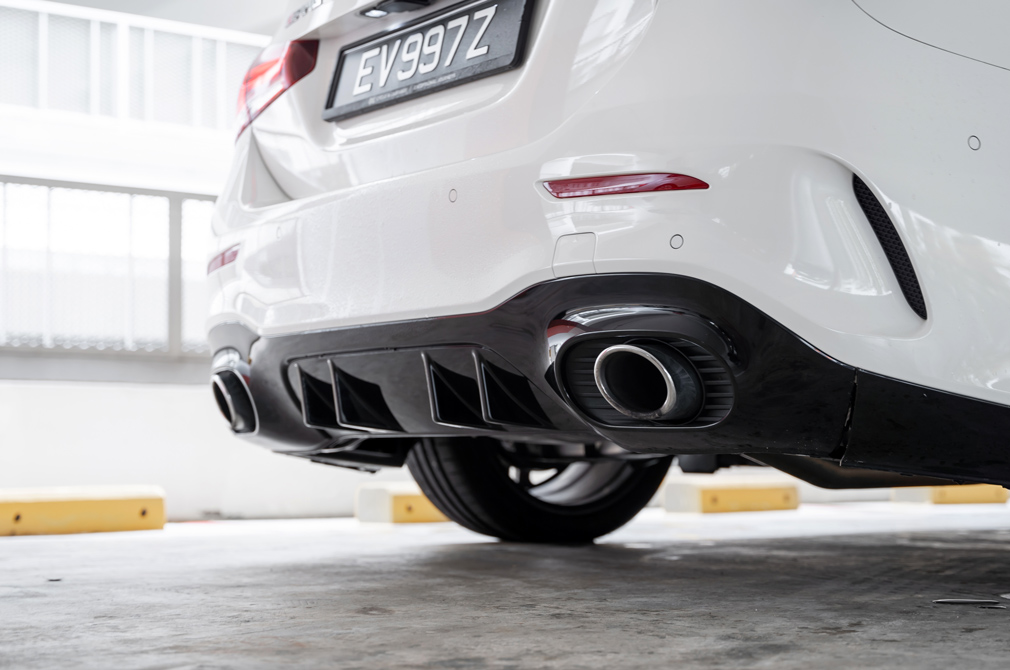 A SPRINKLING OF SPORTINESS

Like the exterior, the sporty touches inside are also restrained. The Mercedes-AMG A35 has the same front seats as its regular siblings, but instead of just leather, they are also trimmed with suede.

Red seatbelts and red contrast stitching, together with the rubber-studded alloy pedals, add to the racy feel.

Although the steering wheel is no different to that of an A-Class’, it still offers a positive grip and has a flat bottom, which make it nice to hold.

You may have noticed that the instrument panel looks a bit small and you’re not wrong. 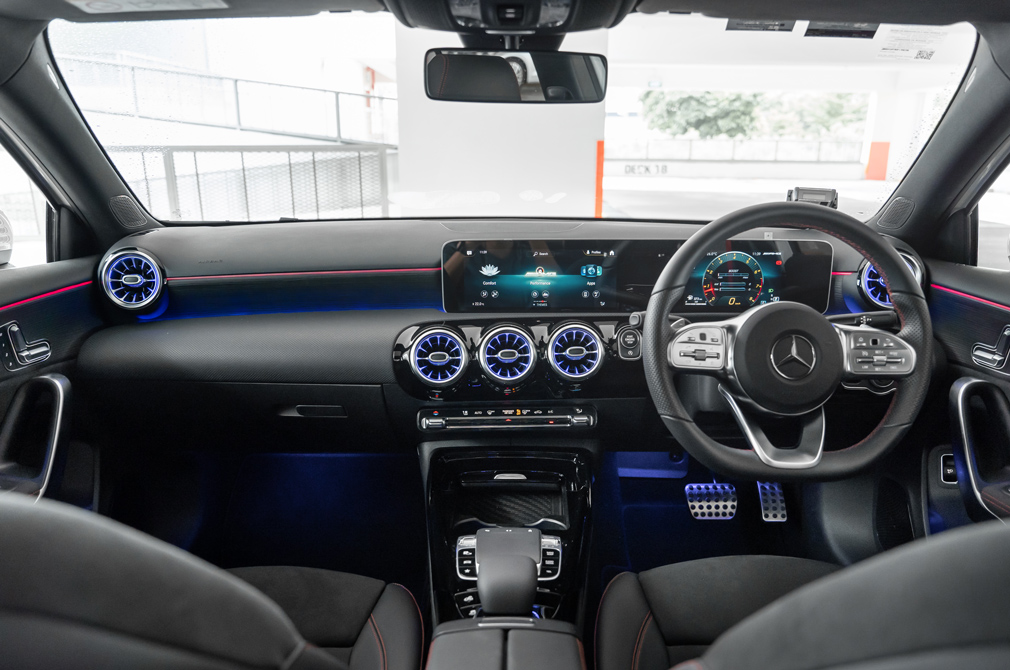 Our test unit only has a 7-inch display with a single dial, but the cars sold by the official agent will have the 10.25-inch instrument panel, as per the standard specifications.

“Hidden” in the menus are the three-stage Electronic Stability Programme (ESP) and the AMG Dynamic Select drive programme, which has five unique configurations.

These enable the driver to tailor the car’s performance to his or her liking, while setting the Mercedes-AMG A35 apart from its less athletic siblings.

If, up to this point, you were taken in by the A35’s “innocent” looks, firing up its motor will instantly change your mind.

The “vroom” that reaches your eardrums is louder and rortier than usual. An AMG-specific display emerges before your eyes. As you grip the steering wheel, this naughty feeling suddenly wells up within you.

Instinctively, I set the drive mode to Sport+. The Mercedes-AMG A35 is a car that’s raring to go, and I was only too willing to indulge it.

Once clear of traffic, I gunned the turbocharged 2-litre engine and was rewarded by a throaty soundtrack. Four-cylinder units don’t usually sound too nice, but the A35 is an exception.

Despite being “AMG lite”, this powerplant packs a wallop with its 306hp and 400Nm. The latter figure, despite only coming on at a relatively high 3000rpm, merely requires you to downshift once (perhaps twice) to access it. 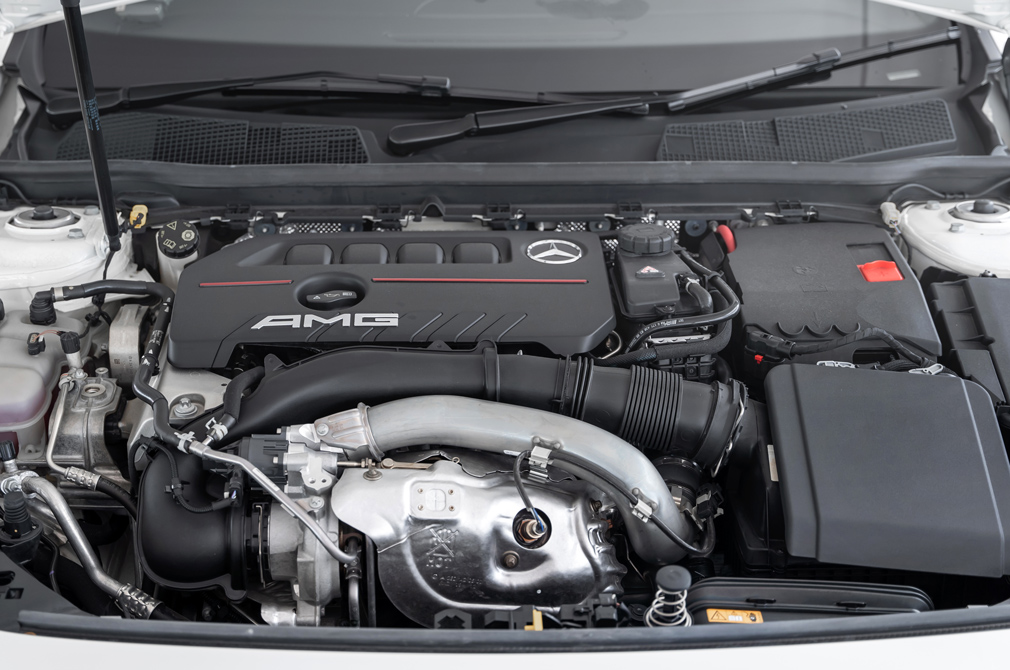 Gearchanges are quick, too, thanks to the speedy 7-speed dual-clutch gearbox.

It must have been alarming to other motorists – including several CLA180s I passed – to see and hear this innocuous-looking A-Class Saloon storming past them. For the record, the A35 finishes the century sprint in just 4.8 seconds.

Catching unsuspecting motorists and perhaps even a hot hatch driver by surprise – therein lies the fun of driving a sleeper car.

But the Mercedes-AMG A35 doesn’t just astonish others on straight roads. It’s pretty adept at having its way around corners, too.

Equipped with 4Matic all-wheel-drive with fully variable power distribution, the A35 can take on all manner of bends. It helps that it is shod with sticky Continental ContiSportContact 6 tyres, too.

The accurate helm helps you position the car for your entry, and the nose tucks in confidently and obediently. AMG-specific suspension components and stiffer damping help rein in any unwanted movement, so that the car stays on your chosen line.

The brakes are excellent. You get a meaty instead of a mushy pedal feel, and the power builds progressively, too. In fact, I had just as much fun braking as I did when I was accelerating! 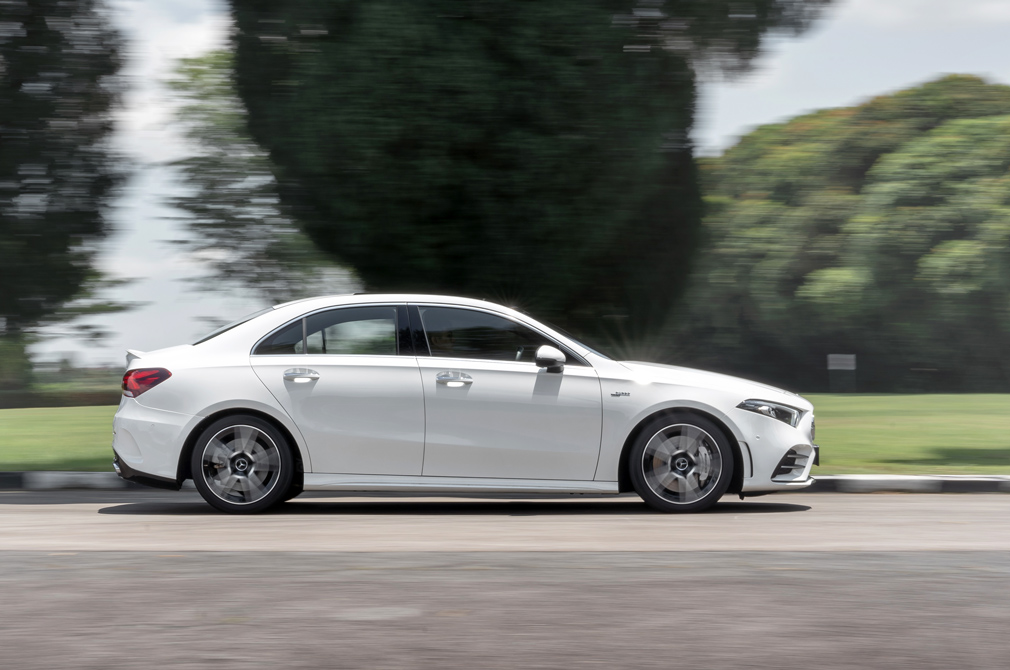 Mercedes-AMG A35’s acceleration packs a punch, but care must be taken when going over narrow speed bumps.

Is there a downside to all this nimbleness and agility? There is, but amazingly, it’s not much. The ride, though firm-ish, is still acceptable. However, the driver will need to go really slow over speed bumps – especially those narrow metal or rubber kinds.

Go over them even a bit too quickly and your rear passengers’ backs and bottoms will receive a big thump. Continue this and they might return the favour, with your head being the target.

IT’S GOOD, BUT IT CAN STILL BE BETTER

If you’ve been after a sleeper car, the Mercedes-AMG A35 deserves serious consideration. After all, it has the power, speed and handling you’d want in a sporty compact saloon.

I am nitpicking here, but part of me feels the A35 lacks a certain finesse.

Take parking for instance. The gearbox doesn’t respond promptly when shifting from D to R, and sometimes shifts to Neutral. I have to slowly and firmly push the column-mounted stalk to ensure reverse is selected.

This problem is peculiar to the A- and B-Class models, and it is not the first time I have experienced it. Considering that this is an AMG model, I expected the gearbox software to be programmed to respond quicker.

Then there’s the stiff rear damping. I understand the need to control the rear-end’s movements, but it really feels a bit harsh during regular drives.

Notwithstanding these, the A35 is loads of fun to drive. The only other question is how it stacks up against its direct rival, BMW’s M235i Gran Coupe. 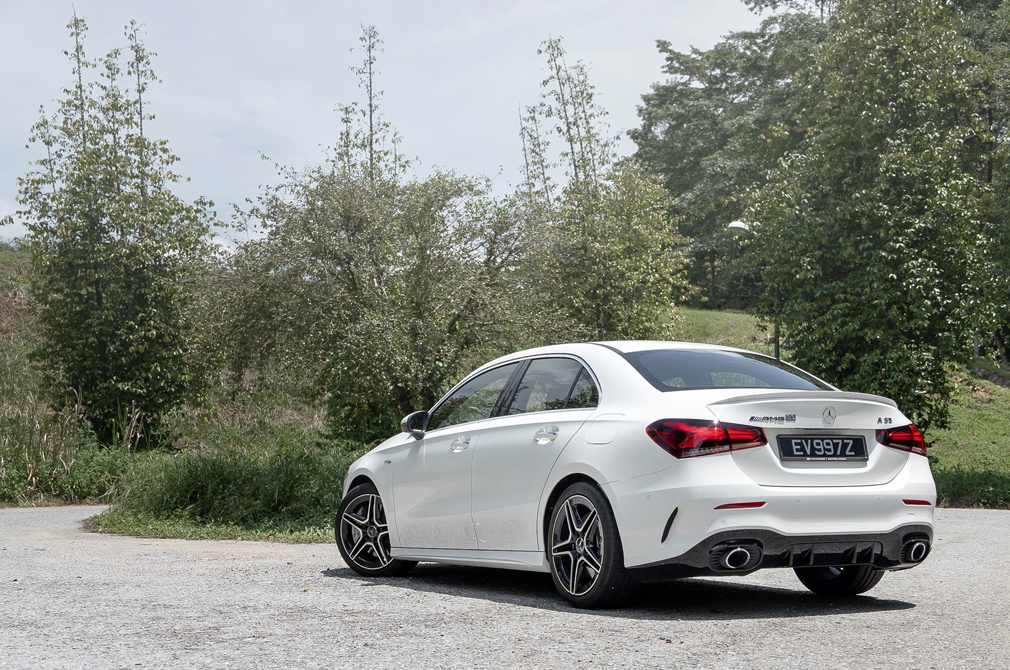 The little boot lip spoiler is another subtle yet nice touch.