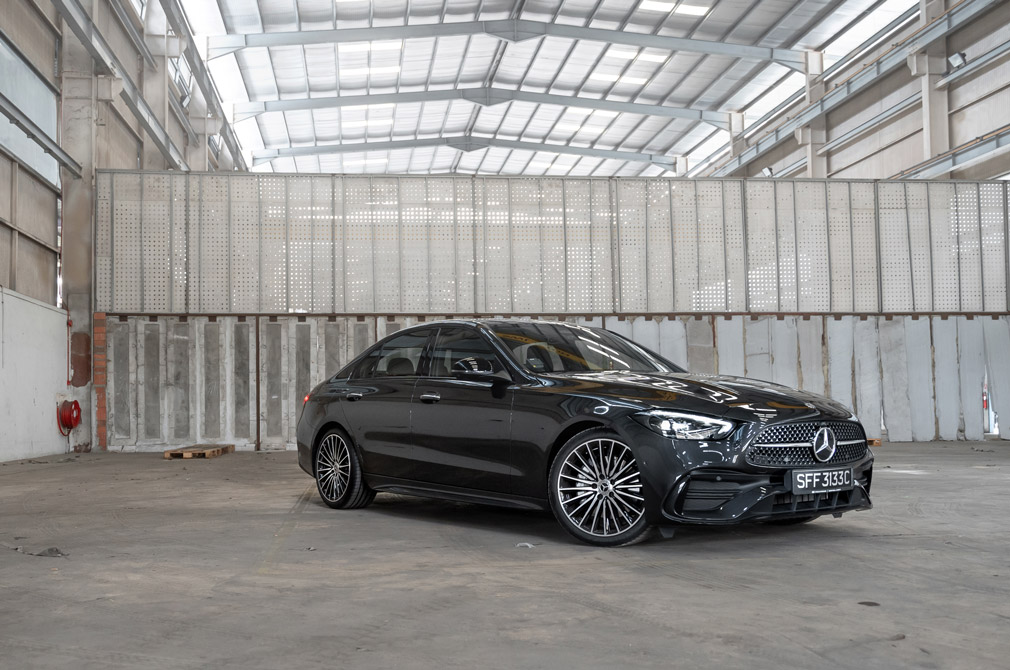 There was once a much simpler time when the word “car” mostly referred to a three-box sedan, and entry-level atas car meant a BMW 3 Series, Mercedes-Benz C-Class or Audi A4. A Toyota Camry does not count, for only in one of these German models will the neighbours instantly know you have been promoted to general manager.

Life has become far more complicated since then. Many volume brands have successfully executed their visions of grandeur, and we now live in an age of $200,000 Korean SUVs.

For their own part, the Germans now have front-wheel-drive models as the new entry-level under their executive sedan stalwarts. Think Audi A3 Sedan and BMW 2 Series Active Tourer.

Thus, towkay junior can now haggle over a CLA180, leaving the C-Class to soar into the luxury troposphere. 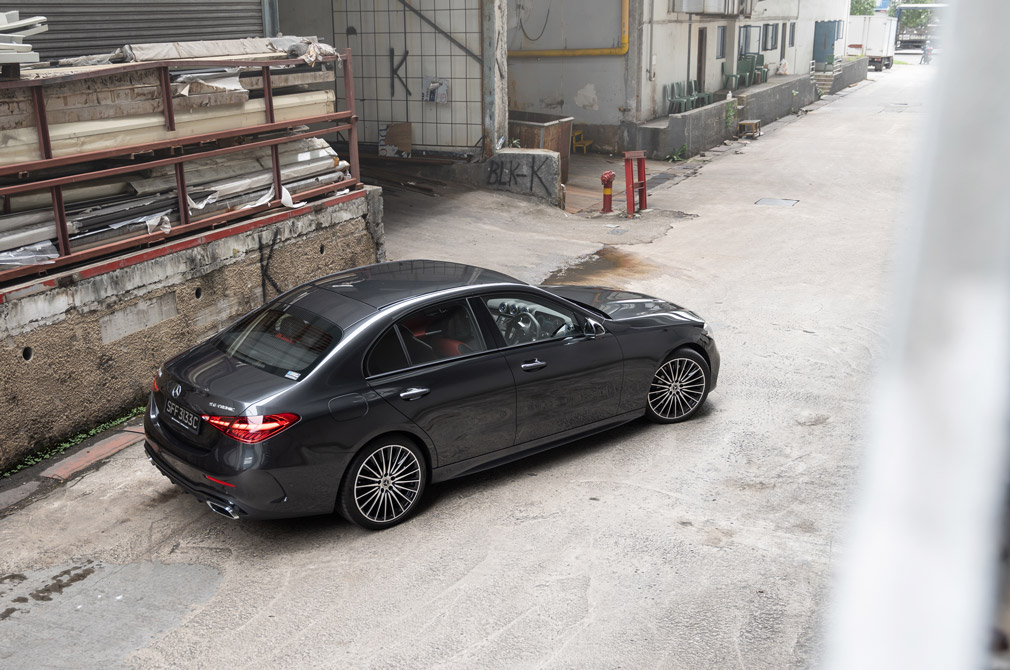 The C-Class has been many things over its generations, with each model seemingly bringing about a subtle repositioning on the line, tracing the sports-executive to junior limo spectrum.

The W204, for example, went 3 Series hunting. Since then, the model’s identity has been crystallised to something much clearer: The C-Class is a scale model S-Class.

In keeping with that debonair disposition, Mercedes has politely declined to partake in the grille size arms race. Consequently, the shark-like nose and sculptural front end contribute to a slickly handsome design you’d linger your eyes on for pleasure. 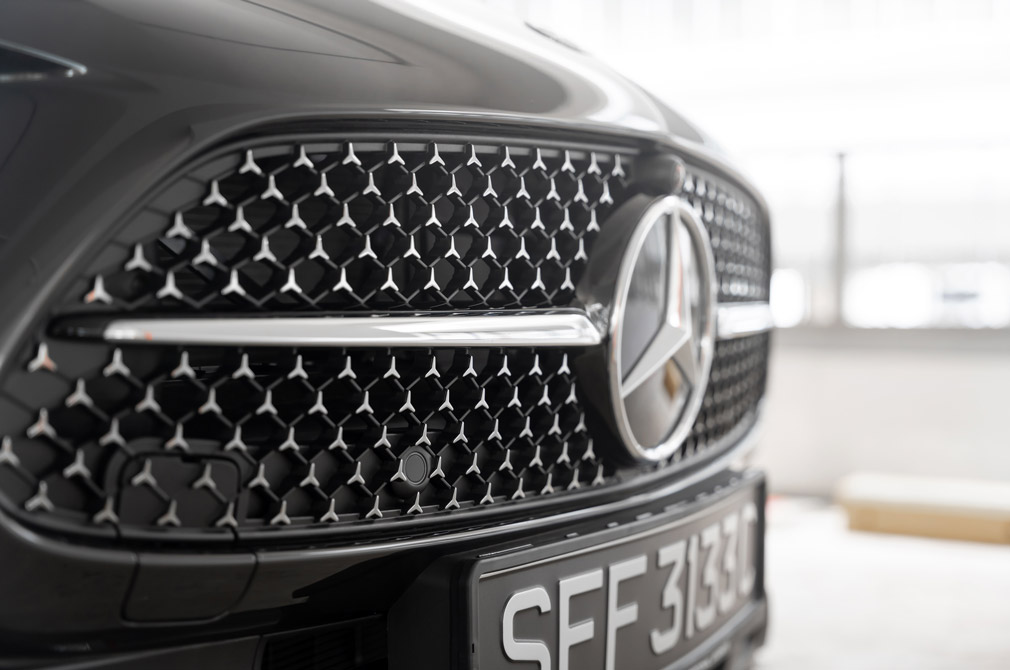 Another less complimentary reason for staring is that, as good-looking as Mercedes’ modern design paradigm is, their models are now quite difficult to distinguish at a glance.

AMG Line adds a bit of distinctiveness back into the mix, with tasteful accents like the studded grille and confident looking wheels enhancing the visual appeal.

Inside, as is the theme these days, there is a much touchscreen acreage. Fortunately, the functions are logically laid out and the system’s responses are sharp.

I would have, as always, preferred physical knobs for the air-con, but Mercedes’ placement and integration of these touch controls are probably the industry’s best so far.

Geometric and material opulence is in abundant supply everywhere, and there is a true sense of heft and quality to the switchgear. A particular highlight is the beautifully rendered air vents that feel solid and satisfyingly cool to the touch.

Made of multiple interlocking elements and illuminated invitingly, adjusting the direction of air flow is a playful delight. Then there are the seat adjustment controls that sit on a protruding panel on the door, again afloat on a glowing bed of ambient lighting. 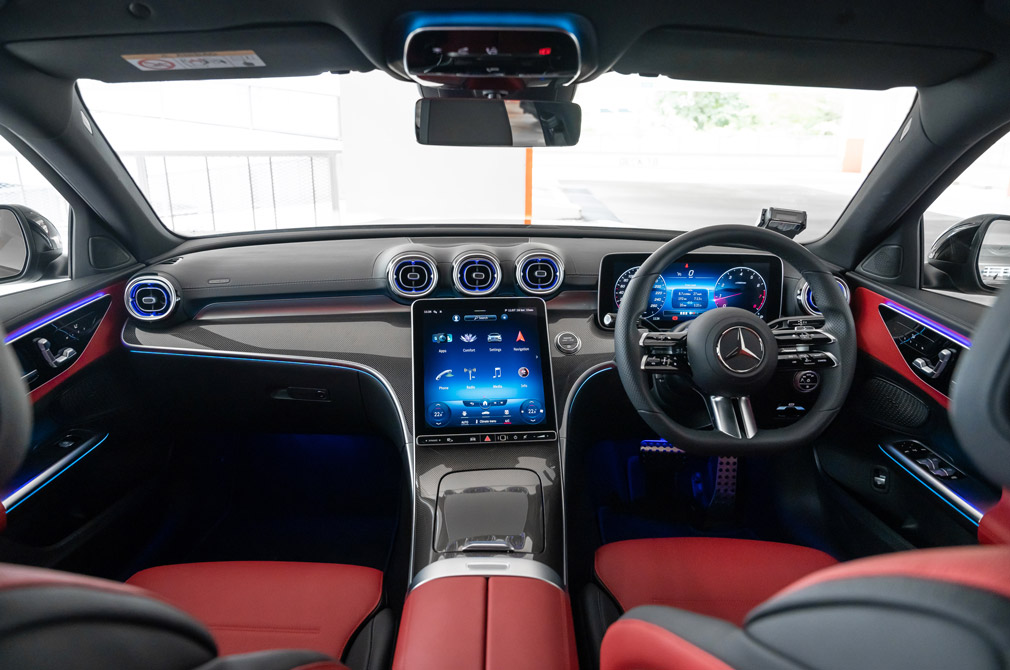 Against the buttoned-down, Crossfit-studio sobriety of a BMW 3 Series, or the central London law-office, De’Longhi-coffee-machine hypermodernity of the Audi A4, the C-Class, particularly upholstered in this risqué shade of red, presents the glamorous bohemian chic of ‘60s Soho.

One could entertain oneself for hours, getting high on the psychedelic array of pulsing, glowing light combinations.

Some small niggles pierce the bubble of sophistication, though. With that much glossy surfacing, it is not long before the cold light of day reveals a smorgasbord of oily smudges and fingerprints.

Those same surfaces then glint angry sunlight into your eyes from multiple angles as you thumb the touch-sensitive controls on the steering wheel for the third time, willing for an accurate response. 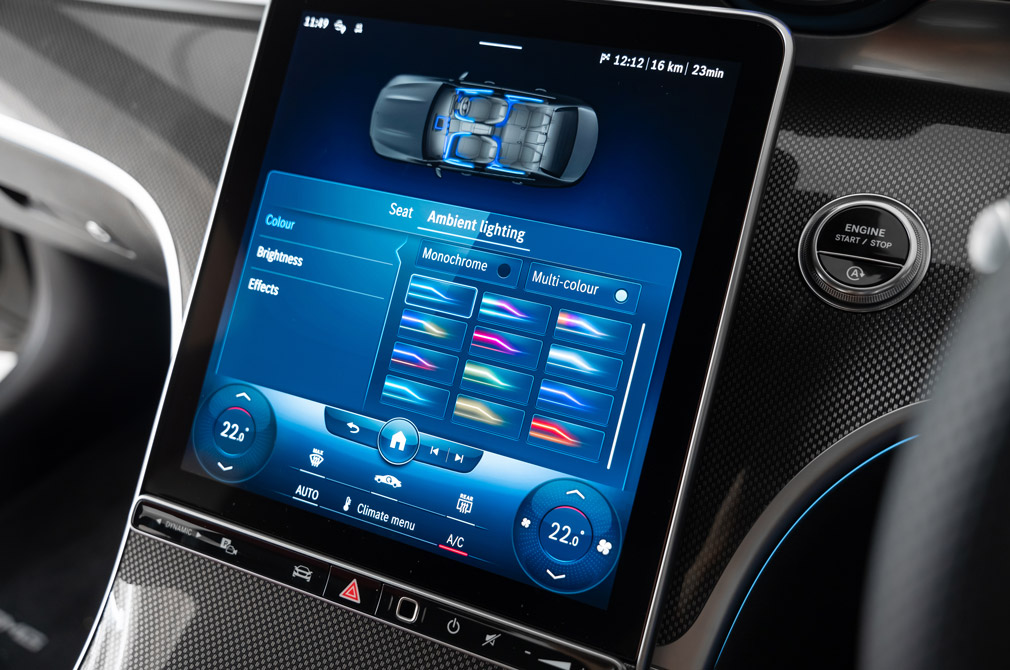 City crawling is an entirely undramatic affair in the C200. The brake pedal has an elastic texture, but is easy to modulate and has imperceptible dead spots.

Step-off is buttery smooth, with the gearbox operating unobtrusively in the background. The Rear-axle steering can feel spooky to the uninitiated, but it is a godsend in Shaw Towers’ ridiculous parking structure.

It will not be long before you are marvelling at the low-speed manoeuvrability and feeling bolstered in confidence by the stability at a cruise.

The car’s nonchalant demeanour at carpark speeds, however, hint ominously at an aloof dynamic character.

The controls feel loosely detached, neither possessing the direct and secure sense of connection of the Lexus IS300h nor the involving immersion of the 3 Series. 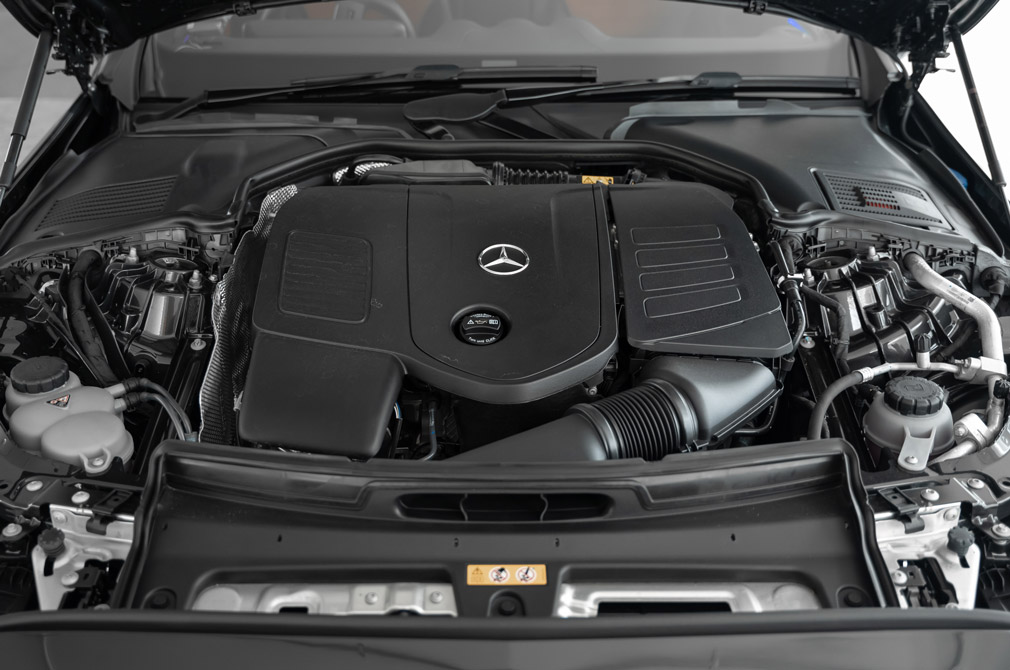 The combination of the mild hybrid system’s hiss and a metallic, slightly clattery engine note create the aural impression of bronchitic wheezing.

I worried that Mercedes had created a sports luxury sedan that is gorgeous to behold but too indifferent to satisfy the first half of its brief, AMG Line or otherwise.

Turns out, I need not have feared. The C200 is capable of a clear distinction in operating texture between crawling around carparks and out on the open road.

At a brisker, flowing pace, or anything above 40km/h when the car has cleared its throat, a nice proportionality sets in. The agility, grip, and ultimately enjoyability of the driving sensations on offer are nobody’s inferior, proving that beneath the silken veneer is the constitution of a very capable sporting sedan.

It nevertheless seems that the car’s focus remains very much on dignified progress. While it is more than capable of Capoeira, the Mercedes’ instincts tend to prefer ballet. 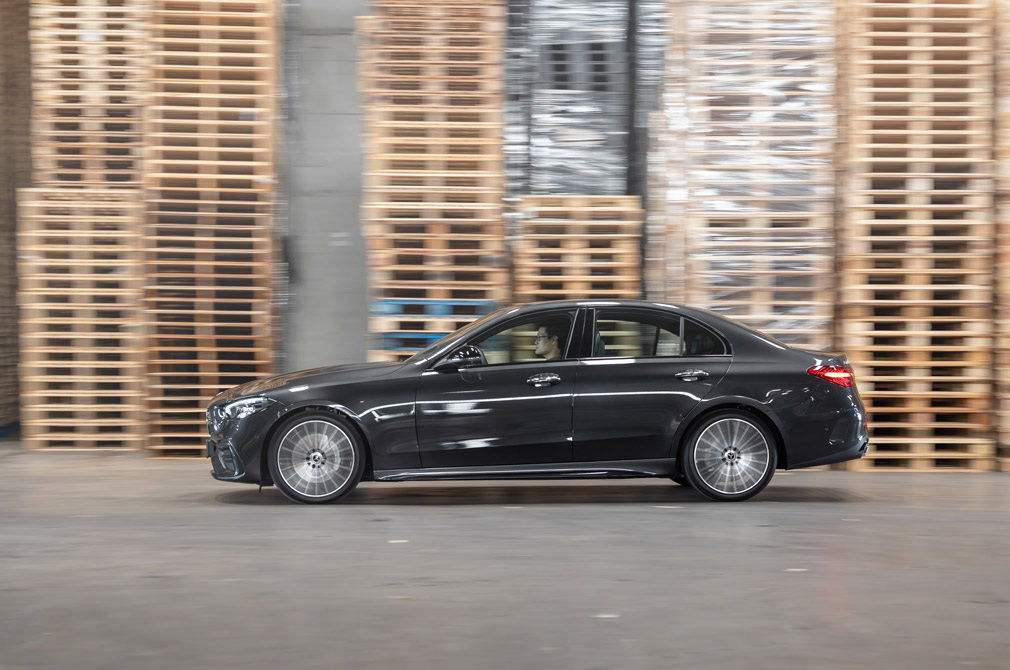 This is a subjective, deeply psychological thing, but the sensory cues aboard do not goad you to carve up River Valley Road or Republic Avenue with the kind of verve and aggression that makes upstanding citizens wary of 3 Series drivers.

Correspondingly, the 201hp powertrain does not feel as thrusting or eager to leap the car forward as the motor in a 320i, despite a horsepower advantage on paper.

Move to the back seat and the 25mm growth in wheelbase over its predecessor is immediately noticeable, primarily by your hamstrings which can now be supported by a seat squab of sufficient length. Headroom, elbowroom, and legroom all benefit from the model’s growth spurt.

The C200 AMG Line hits all the high notes of style and luxury required of a Mercedes. It is a fully featured, fully realised luxury automobile of immense talents and true depth of personality.

This class of car, and this includes its direct competitors, however, are far from the entry level machines they once were all those years ago, nor is the automotive landscape quite the same easily stratified marketplace.

Even notwithstanding the eye-opening COE prices, this is reflected in the prices they command.