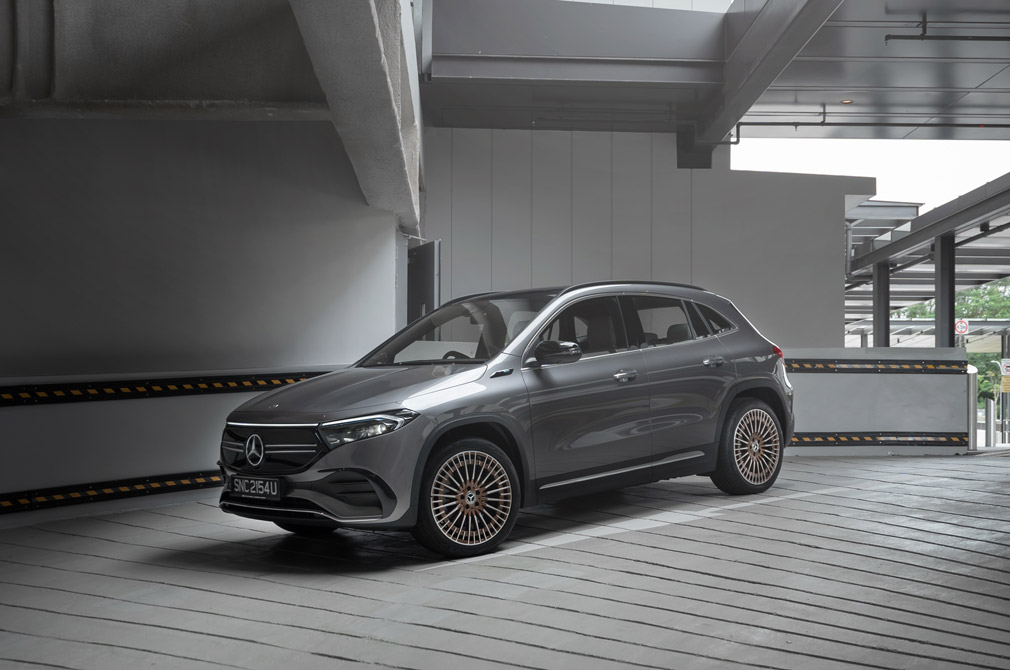 If Mercedes-Benz is intent on using design to attract buyers to its latest electric offering, it is certainly on the right track.

The EQA is the entry-level model of the Mercedes-EQ family – the German carmaker’s electric sub-brand. Its larger sibling, the EQC, was also launched in Singapore last year.

The EQA is essentially a fully electric GLA, one of Mercedes’ most popular – if not the most popular – SUVs. But apart from their shapes and silhouettes, both models’ drivetrains and styling language are very different.

From afar, the EQA resembles a GLA, but as you draw closer, you realise that it isn’t. From the front and rear, the EQA is clearly unique. 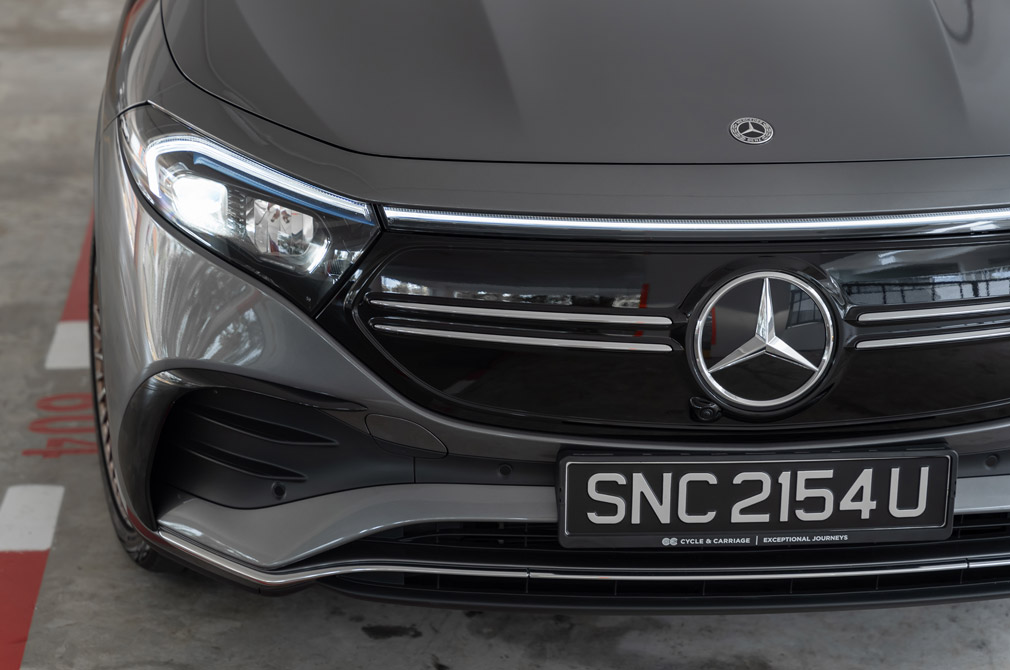 For unlike the GLA, the EQA’s grille (blanked-off, of course) and headlights are presented as a single entity, further “unified” by the light bars that stretch across the top.

When illuminated, they also give the EQA a unique face.

The same concept is repeated at the rear, where the tail-lights seem to stretch across the tailgate. The light bar’s signature here is more distinctive, too, with “loops” on either end. And in contrast to the GLA, the rear number plate is located on the bumper, not the tailgate. The EQA you see here is in Edition 1 trim, which comes with several stylish additions. They include 20-inch, multi-spoke wheels with a rose gold finish, AMG trim elements mostly in black instead of chrome, and a key fob finished in rose gold.

Inside, the Edition 1 specifies neva grey leather upholstery that has been “Cyber-cut”, or perforated in order to show the blue fabric beneath it.

Facing the driver are a pair of 10.25-inch displays – one for the instruments and the other for infotainment. Both are endowed with gorgeous graphics and punchy colours, with the former offering several layouts (including “analogue” dials) to choose from.

Speaking of colours, the EQA also has a palette of 64 mood lighting hues, which coupled with the backlit dashboard on the passenger’s side, further enhances the interior’s bling. 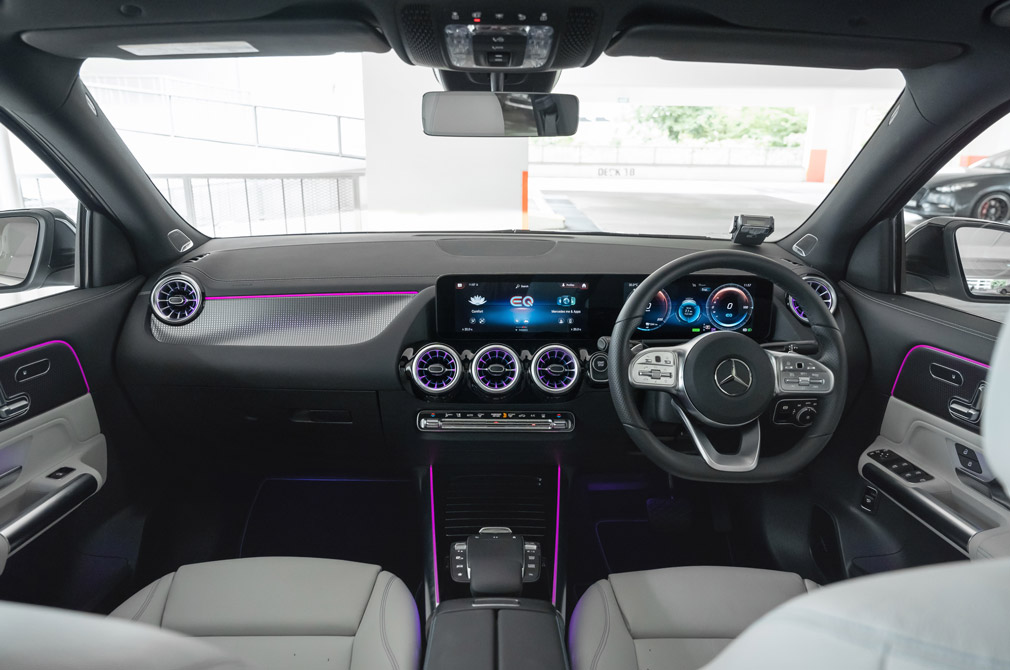 The EQA’s loud styling is the total opposite of its drivetrain, which is deathly quiet.

A 66.5kWh battery powers a front-mounted asynchronous motor, which produces 188hp (190PS) and a healthy 375Nm. The near-instant torque makes the two-tonne EQA feel relatively light on its feet, especially when the throttle is generously applied.

In the Sport setting, the power comes on even more urgently, with hair-trigger like responsiveness that lends itself well to those in a hurry. It’s not for everyone, though, and if this is your first time driving an EV, leave it in the Comfort setting till you get used to it.

The sudden rush of torque will make you believe that the EQA is faster than it is. In fact, its century sprint time of 8.9 seconds is a shade slower (by 0.2 of a second) than the GLA 200. 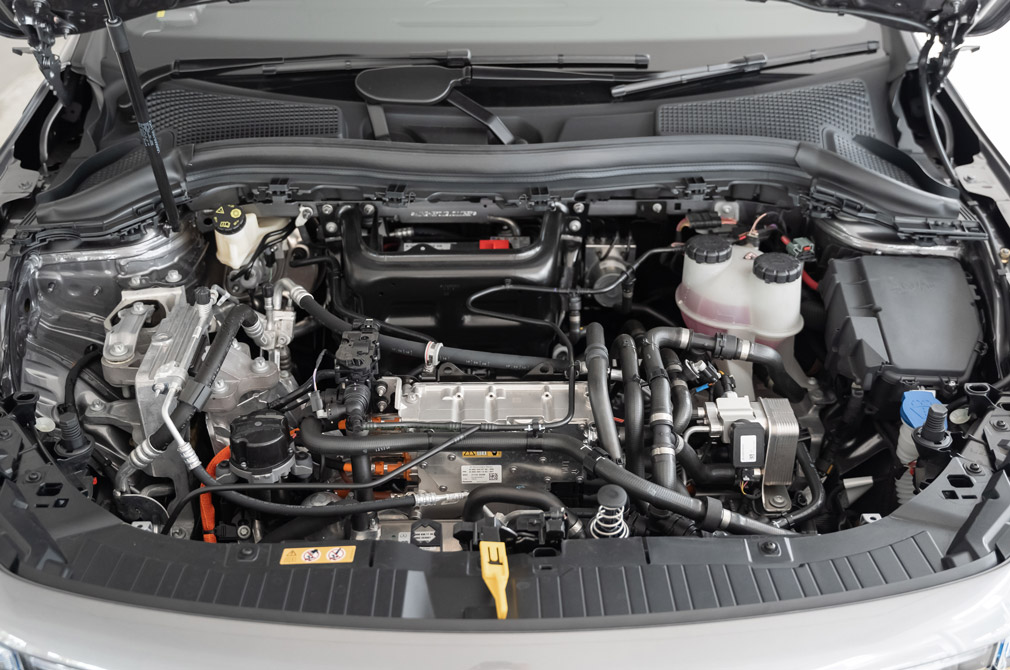 To complement the drivetrain’s silence, Mercedes engineers employed numerous strategies to further reduce NVH, since the lack of sound and vibration from an internal combustion motor makes other noises more apparent.

The electric motor and air-con compressor, for instance, are isolated from the supporting frame with rubber-bonded metal elements. The air-con pipes are modified to follow the rigid components in the body shell, and the bearing points isolated.

Other innovations include a redesigned front axle subframe, for a more rigid connection between the suspension strut and brake, plus subframe mounts for the rear axle.

The end result is a supremely quiet ride, with little to no noise from the drivetrain, and hardly any tyre or road noise. This means greater enjoyment from your music and conversation, and a more refined drive overall.

The EQA’s smooth power delivery and practically silent performance are its biggest plus points. The last electric SUV that I recall being this silent is the Lexus UX300e, which is a smaller car.

However, the EQA’s emphasis on comfort means it does not cater to keen drivers. This is not a car you push hard through corners. Long and gentle sweeping bends are okay (when taken at reasonable speeds), but tight corners are not its forte. Besides, the eco-friendly tyres are not suited to these endeavours. 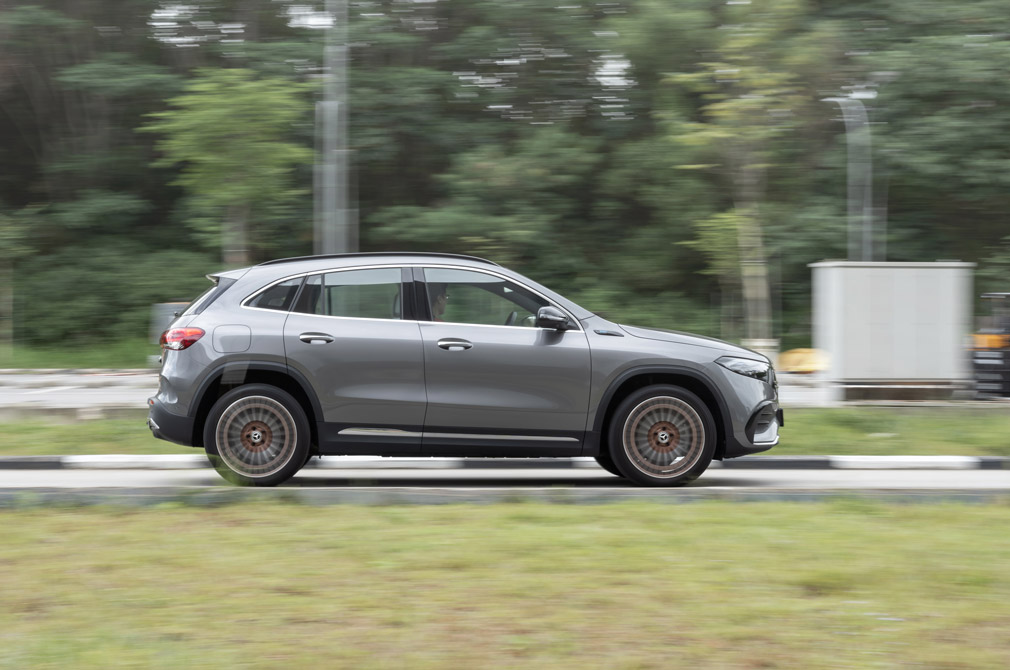 If Mercedes had to improve something, it would be the ride quality. Though noiseless, I found it to be less than settled, with more pitching and bobbing than expected whenever the car is driven over poorer surfaces.

I am probably nit-picking here, but when the rest of the car is so quiet, other things – such as the ride – become a lot more noticeable.

The EQA is best sampled at a more relaxed pace, which also gives the electric motor a chance to recuperate energy through regenerative braking. There are several levels to this, which can be selected using the paddle shifters, but I found D- (medium) to be ideal. 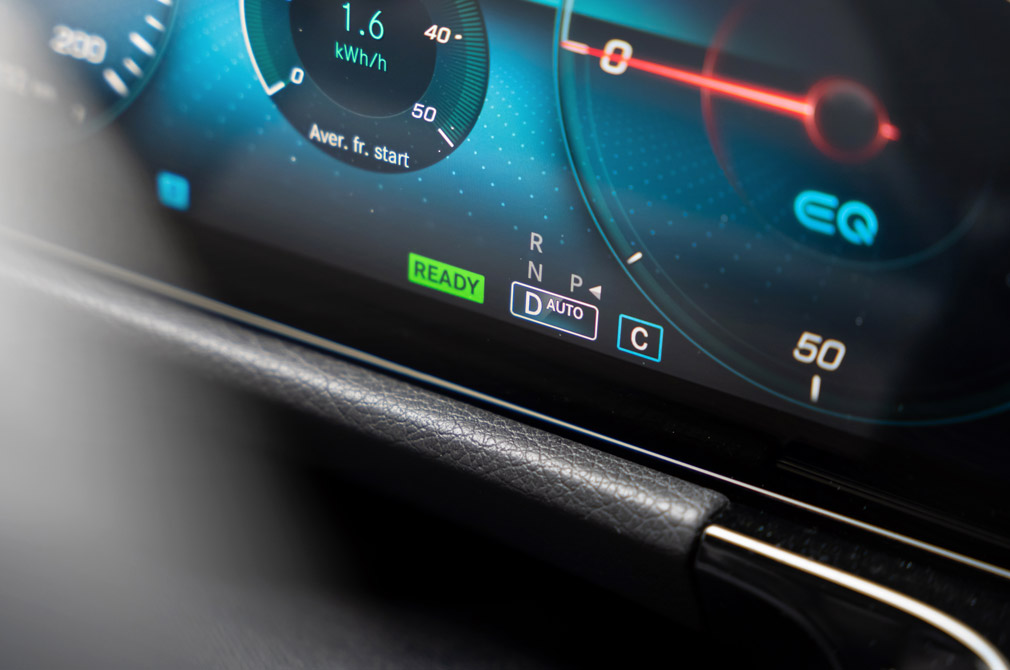 In D-, the “engine braking” comes on gradually instead of suddenly, which avoids the unpleasant sensation of being pulled forward. This makes it both easy to anticipate and modulate.

In terms of range, this SUV is claimed to cover up to 426km on a full charge. That’s more than enough for a week of driving for me.

The EQA won’t appeal to keen enthusiasts, but for buyers seeking an eye-catching compact electric SUV, it may just be compelling enough. After all, if Mercedes is intent on using design to attract buyers to its latest electric offering, it is certainly on the right track. 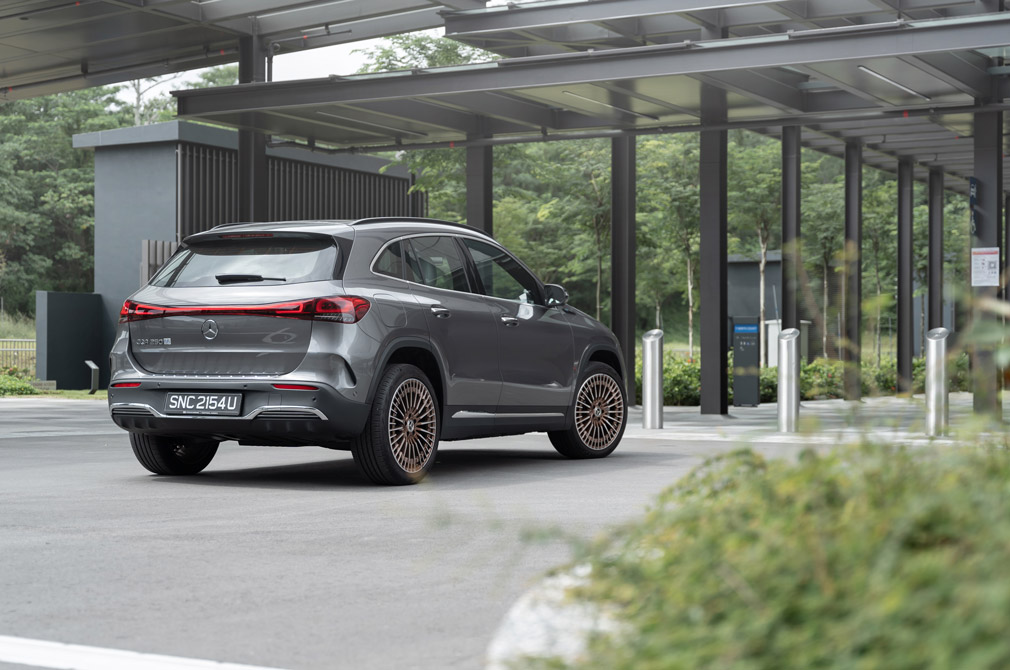