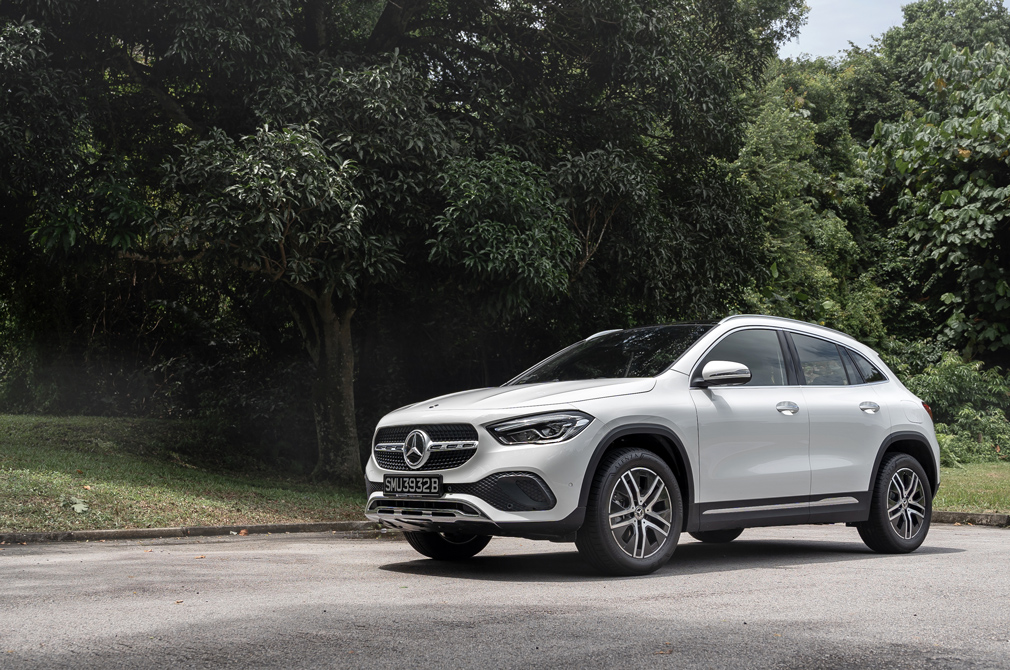 Judging by the number of GLAs spotted on our roads every day, Mercedes’ entry-level crossover has been a hit since it arrived.

Mercedes-Benz got its formula right with this one. The GLA is relatively roomy and refined. It has adequate performance for everyday driving, and most importantly, badge cachet.

In addition, the previous GLA also had what the A-Class hatchback and CLA models didn’t: a pliant ride. The last-generation A-Class was known for having an overly firm ride.

I am guessing it was because the hatchback was marketed as the “rebel” of the Mercedes family. 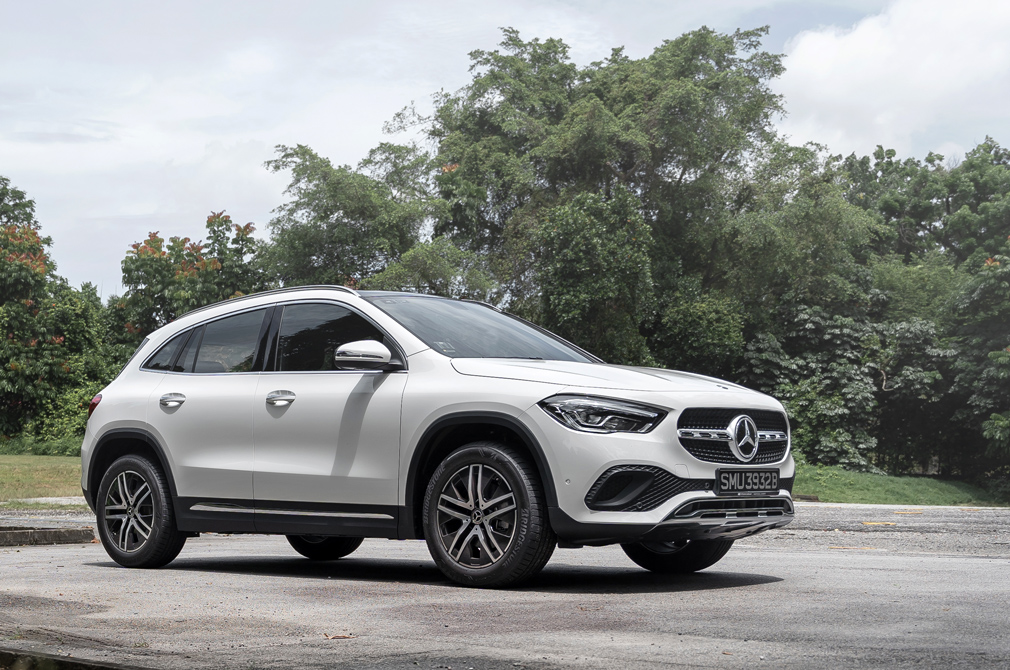 MERCEDES-BENZ GLA: CROSSOVER TO THE SUV SIDE

The last-generation GLA, despite being marketed as an SUV, looks like a “softer” crossover.

That design is gone. The new GLA now resembles the other SUVs in Mercedes-Benz’s lineup, with features such as a single-louvre grille and centrally placed star. From afar, it even reminded me of the GLE450.

Conveniently, the GLA’s doors now cover the sills. This stops them from getting wet, thereby preventing your trousers or legs from being dirtied as you exit the vehicle.

Surprisingly, the new Mercedes-Benz GLA is shorter than its predecessor. In fact, by shedding 14mm, it is now the shortest model in the brand’s entire range. 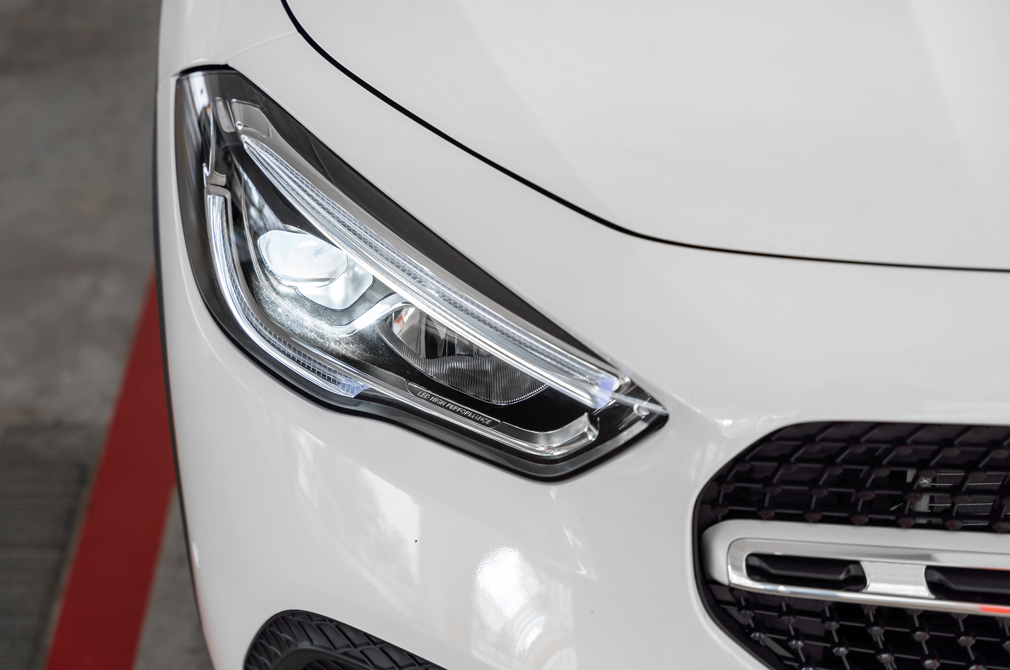 Adding to the SUV-feel are the GLA’s front seats. Apart from being more upright, they’re 97mm taller than before, thus reinforcing the SUV character.

Mercedes-Benz User Experience (MBUX) is standard here. You get a pair of gorgeous 10.25-inch screens that function as the instrument panel and infotainment display.

The latter is also a touchscreen, which is more convenient to use than the trackpad and touchpads on the steering wheel. Drivers can choose from a variety of instrument panel layouts ranging from classic to sporty to one of the more minimalist designs.

I was particularly pleased with the numerous colour options for the mood lighting’s single colour layout. 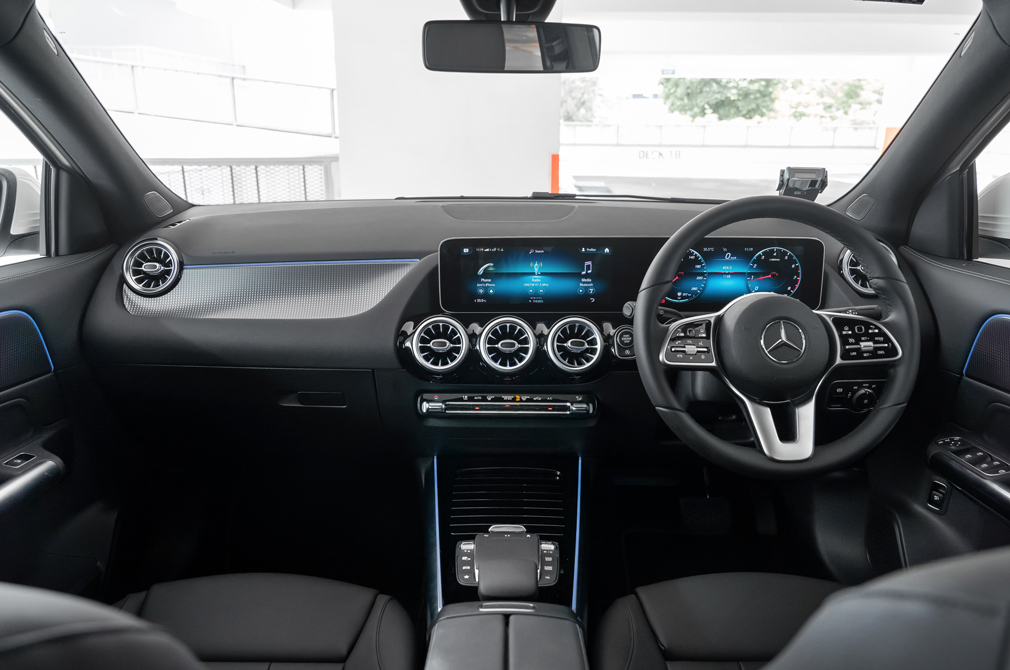 A two-colour layout is possible, but the combinations for this are limited. For the two-hue setup, Mercedes should let users choose from the options in the colour wheel.

Given how modern the new Mercedes-Benz GLA is, it is no surprise that all three ports in front are USB-Cs. USB-C charges devices and transfers data much quicker than a regular USB port.

Unfortunately, a USB-C to Lightning cable is not something that most iPhone users usually have in their bag (it’s probably just me). Fortunately, the Mercedes-Benz GLA does have a wireless charging pad, which I put to good use.

Designers did a good job packaging the rear compartment. The backseats are comfier and there is more space for everyone. I found the legroom and foot space to be more generous than before.

Shoulder room and elbow room have both been increased as well, so three adults sitting abreast have a bit more wiggle room. The rear backrests can also be adjusted to one of seven angles – five more than in the previous GLA.

Together with the bench’s ability to be moved fore and aft by 140mm, the latest Mercedes-Benz GLA offers more flexibility for carrying passengers and cargo. Speaking of which, the boot capacity has been expanded by 14 litres to 435 litres (rear seats up). 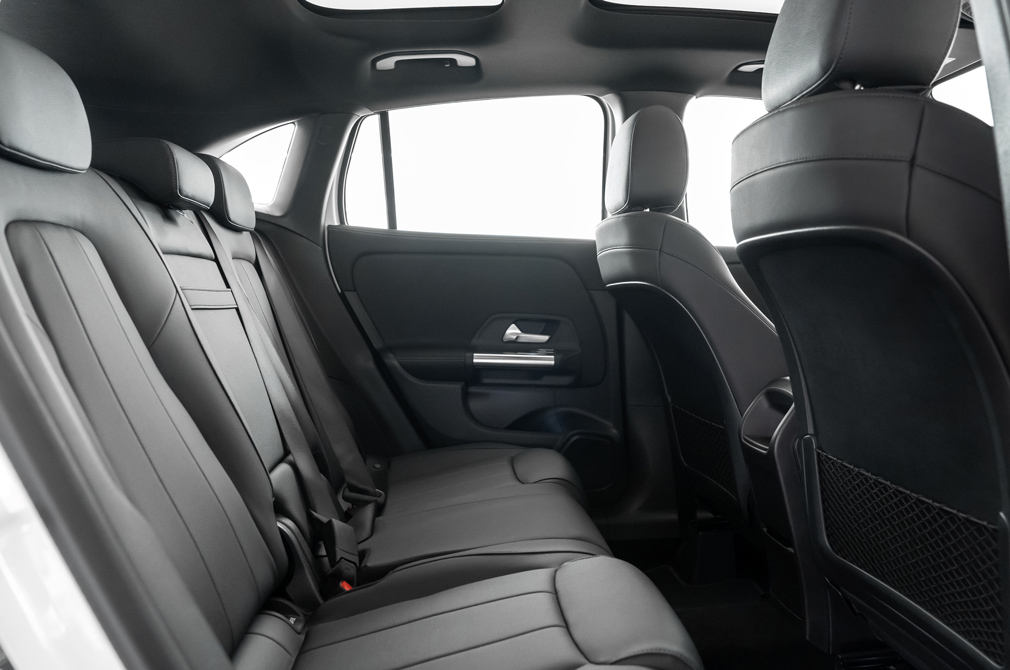 Backseat is roomier than before and the door bins are bigger. A pair of air-con vents would have been nice.

A HAPPY DRIVE FOR MOST

Thus far, the GLA ticked the boxes for equipment, space and practicality. I was hoping it would also offer improved driveability and it does – to a certain extent.

What the engine lacks in refinement, it tries to make up for in responsiveness. In Sport mode, it does its best to accommodate my inputs, willingly stretching the revs till redline.

It feels a lot perkier than the turbocharged 1.6-litre in the previous GLA200, which has a very relaxed disposition. 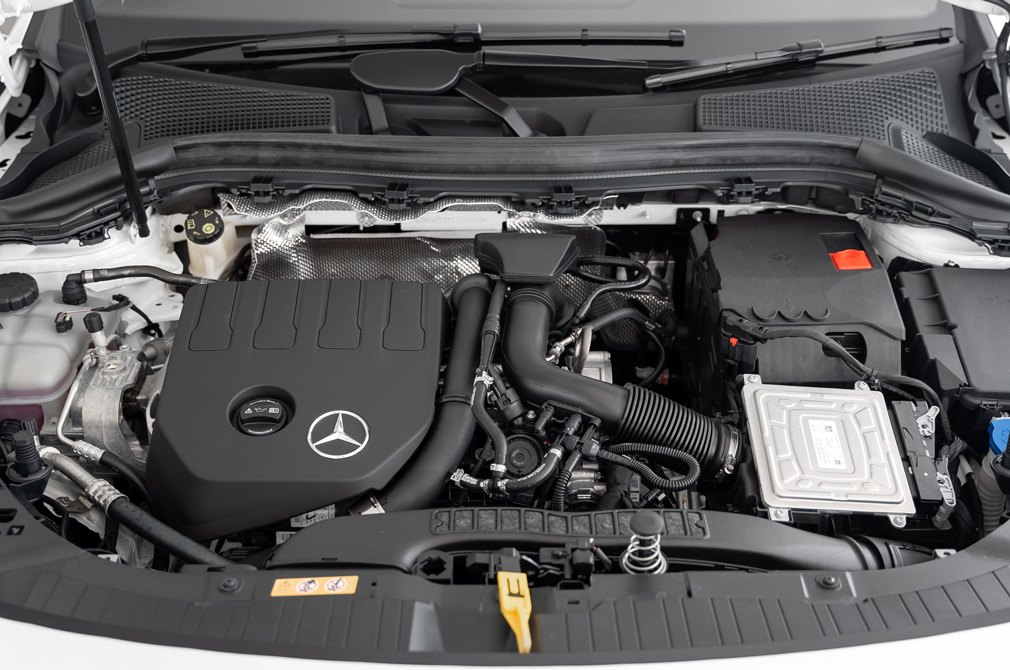 Turbocharged 1.3-litre has a keen response, but its workmanlike vocals when stretched are intrusive.

That said, most owners will find the performance to be punchy, since the GLA200 hits 100km/h from rest in 8.7 seconds – a relatively respectable time.

But for keener drivers (or impatient ones), the car’s inertia is palpable. And while you do hear the revs climbing, the GLA still doesn’t feel like it’s going that quick.

Again, this is fine for most buyers, who will happily leave the drive setting in Comfort or Eco as they go about their daily routines. Without the high revs, the Mercedes-Benz GLA is noticeably quieter and thus more refined.

A HANDLE ON THINGS

The new Mercedes-Benz GLA feels bigger than the older one behind the wheel. Bear in mind that the new car isn’t actually that much larger, though, and you’ll be fine.

Engineers tuned the GLA200 for comfort, but not to the point where it wallows when you enter a corner too quickly. At any rate, this is not the SUV for these endeavours.

It responds well to progressive/moderate inputs, with the MacPherson struts up front and multi-link suspension at the rear helping the vehicle maintain an even keel.

The 7-speed dual-clutch gearbox swops cogs in a snappy manner. It’s a smooth performer, too, although I’d prefer it if the low-speed take-up could be hastened. 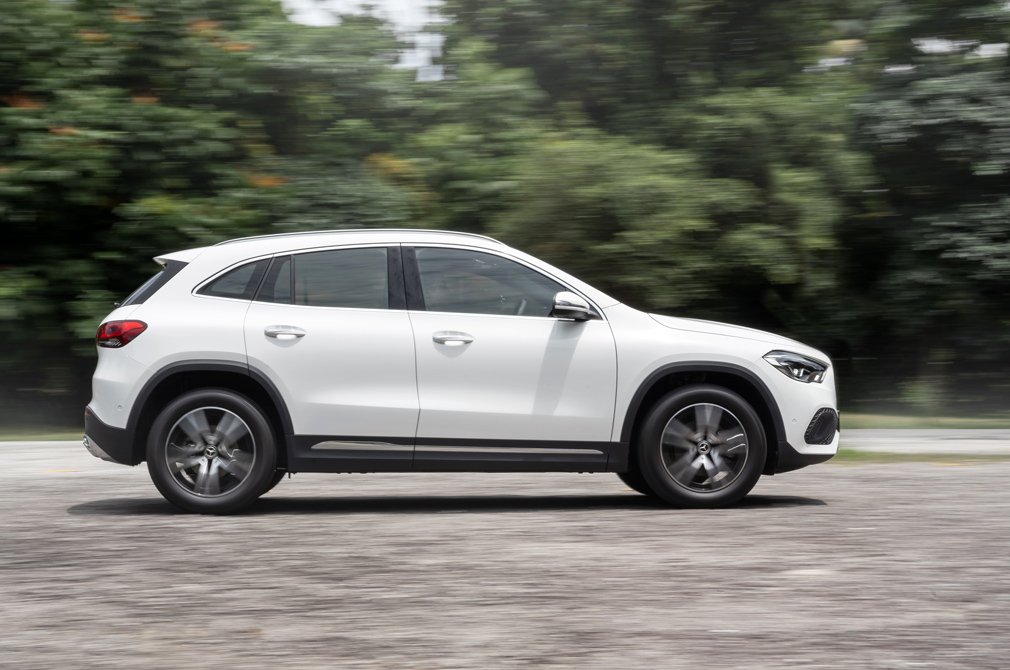 GLA AND ITS RIVALS

Unless the trends towards SUVs change, the GLA is likely to be the most popular variant in Mercedes’ “A” family.

It has eschewed its crossover character for a more SUV-centric design and driving experience. With MBUX, increased space and enhanced practicality, it will impress most potential buyers, but not keen drivers.

The GLA’s German rivals include the BMW X1 and Audi Q3. But its biggest competitor might turn out to be the boxy GLB, which will be officially launched in Singapore next month.

The GLB is built on the same platform as a GLA, but with a seven-seater layout, it is obviously aimed at a different set of buyers seeking more functionality.

However, I cannot imagine someone who’s checking out the GLA giving the GLB a miss, especially since its design and road presence are not easily ignored. 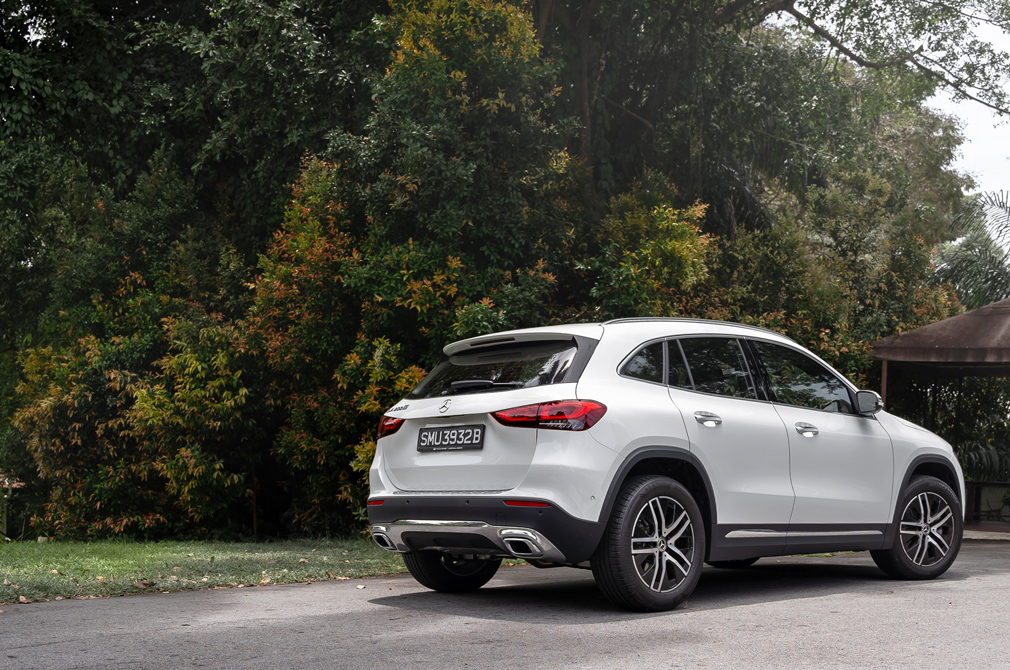