The range-topping versions of Porsche’s mid-engined 718 Cayman/Boxster twins, the GT4 and Spyder respectively, have returned – faster and more desirable than ever.

Visually, the bewinged GT4 is still the purposeful, no-nonsense sibling, while the Spyder (the “Boxster” appellation has been dropped from this halo model and it is now known simply as the 718 Spyder) is the head-turner.

With a lower windscreen and sleeker roofline than the rest of the Boxster range, distinctive flying-buttress soft-top extensions stretching over the rear haunches, and that pair of elegant longitudinal humps on its rear deck, it is by far the best-looking Boxster of all. 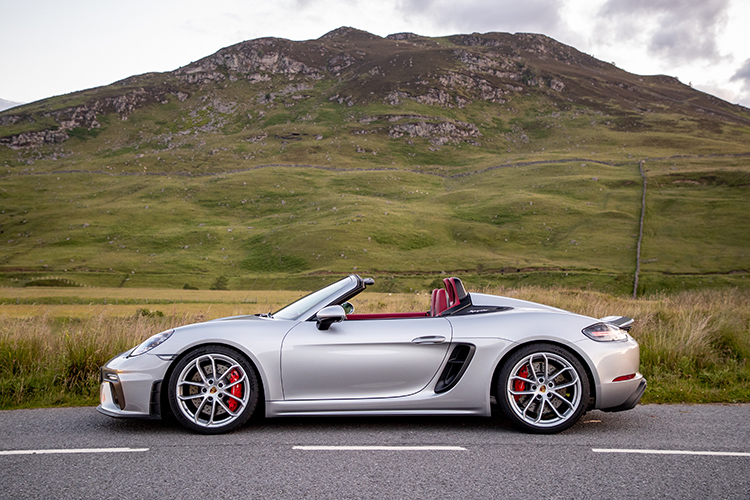 But it is no longer the prettier but poorer relation of the GT4.

Unlike its predecessor, it now has the exact same Porsche Motorsport-honed chassis hardware and setup as, and identical output to, the GT4 (the previous Spyder shared the GT4’s engine but was pegged back by 10bhp). The Spyder is now a topless GT4 in all but name.

And that mid-mounted engine is a brand-new 4.0-litre flat-6 unit, in place of the old 3.8-litre. It remains non-turbocharged – as before, Porsche eschewing forced induction in favour of the aural thrills, linear delivery and trigger-sharp throttle response of natural aspiration for this purist pair. 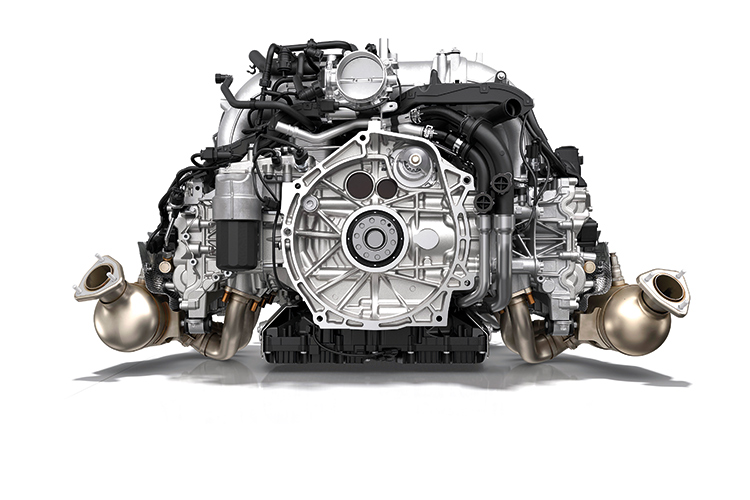 It revs to 8000rpm – some way shy of the 9000rpm that the GT3’s similarly-sized (but entirely different) engine can hit, but still 200rpm beyond the previous GT4/Spyder’s 7800rpm redline.

The transmission is as before – a 6-speed manual with a wonderfully positive, short-throw shift (and automatic rev-matching function on downshifts), although a PDK-equipped version is in the wings. This time around, Porsche has paid close attention to the underbody aerodynamics. There are undertrays and panelling front to rear to hone the airflow, culminating in a large, fully-functional rear diffuser which generates immense downforce without adding drag.

Combined with a larger rear wing and other details like a more jutting front splitter, air curtains and a Gurney flap integrated into the front air intakes, the GT4 has 50% more total downforce than before. 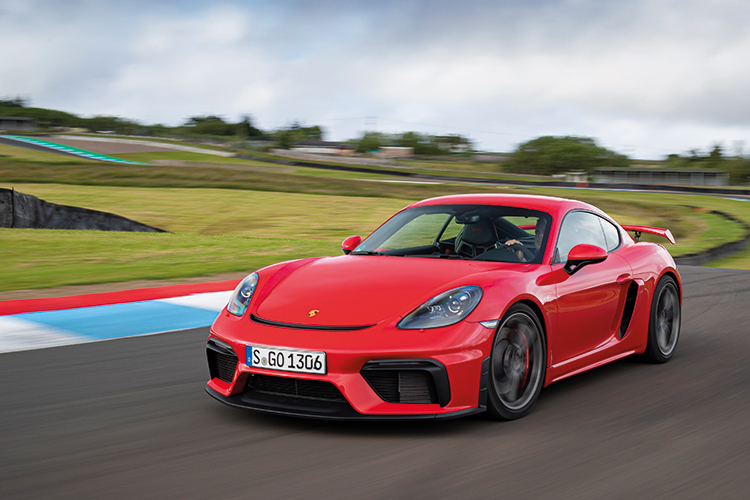 Without a rear wing, the Spyder has less downforce that the GT4, although it recoups some of that deficit with a ducktail rear spoiler that extends automatically at speeds above 120km/h – in fact it is the first-ever Boxster to generate positive downforce.

Otherwise, the recipe for both cars remains as per the original GT4 – front chassis hardware taken straight off the 991 GT3 (to the extent that the components are actually interchangeable), a 30mm-lower ride height over the standard 718, adaptive Bilstein dampers, much larger brakes (also taken off the GT3) and reduced sound insulation for weight reduction.

Also in the interests of weight loss, the Spyder’s softtop is manually-operated. Both cars weigh an identical 1420kg. 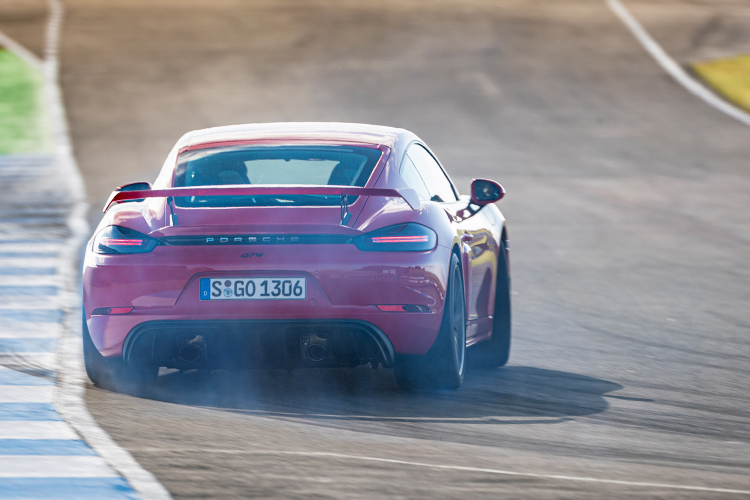 All this, coupled with Michelin Pilot Sport Cup 2 tyres using a bespoke new compound (said to be 2% grippier than before), allows the new GT4 to shave a full 12 seconds off the old car’s Nurburgring lap time.

At 7 minutes 28 seconds, the new GT4’s time is also 4 seconds quicker than that of Porsche’s own Carrera GT supercar of 2004. Porsche does not quote a lap time for the Spyder, but an engineer assured me that it is “just a few seconds” behind its hardtop twin.

We drove both the GT4 and Spyder on road, and the GT4 on track (at the thrilling Knockhill circuit near Edinburgh), and in every setting the cars felt devastatingly capable yet deliciously involving. 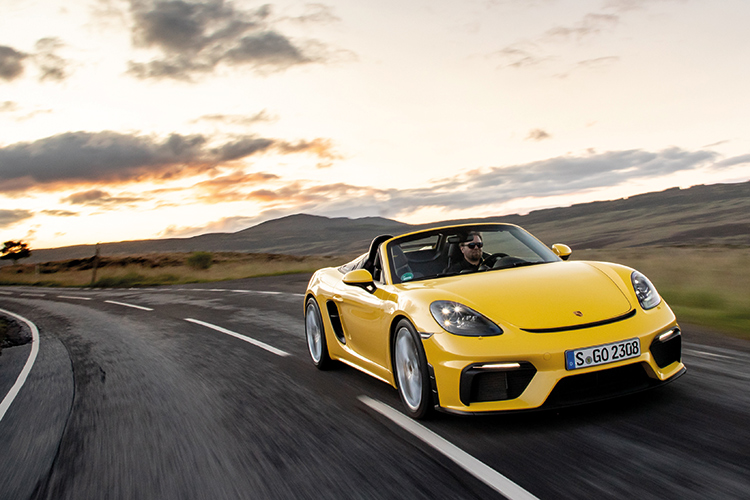 Impressions? The ride is, as before, very firm but in a controlled, nuggety way.

Appropriate to the cars’ raw, unfiltered ethos, there is more sensitivity to camber and surface imperfections than on other 718s but thanks to resolute damper control, bumps and undulations are shrugged off with dismissive nonchalance.

Road noise is ever-present thanks to the reduced insulation, but again this just adds to the track-car feel of the pair.

As does the engine’s voice – a gritty, serrated note that hardens at 4000rpm into a deeper bellow. It lacks the ultimate top-end wail of the GT3 engine, but taking this powerplant to its redline is hair-raising nevertheless. 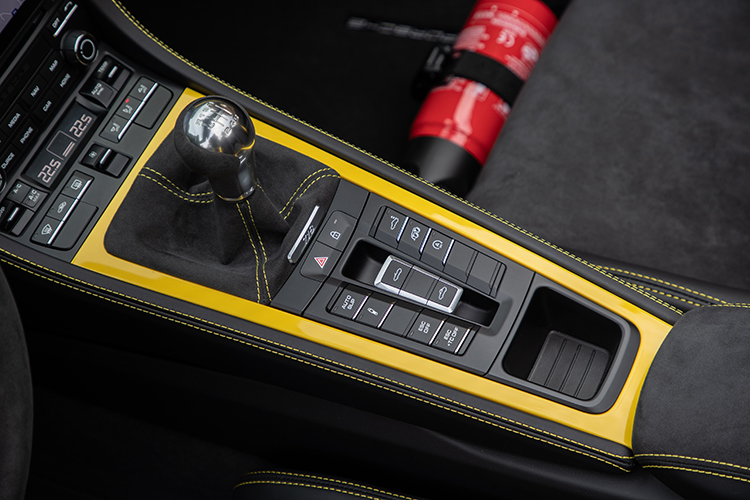 The clutch is slightly lighter than before, but the gear ratios are too tall – even at very high speeds on B-roads the car rarely gets out of third gear. Still, this is offset by the noticeably increased any-rev urge from the enlarged engine, which gives the car storming pace.

After the numb, artificially-weighted helms afflicting most modern cars, the steering on these Porsche twins is a revelation, the thin alcantara rim chattering and writhing lightly in your palms, every swivel of the wheel resulting in an instantaneous direction change from the front end.

Tellingly there is no mode button to configure steering resistance – Porsche has chosen the perfect weight – meaty enough but not so heavy as to rob the steering of its delicacy – and left it at that. 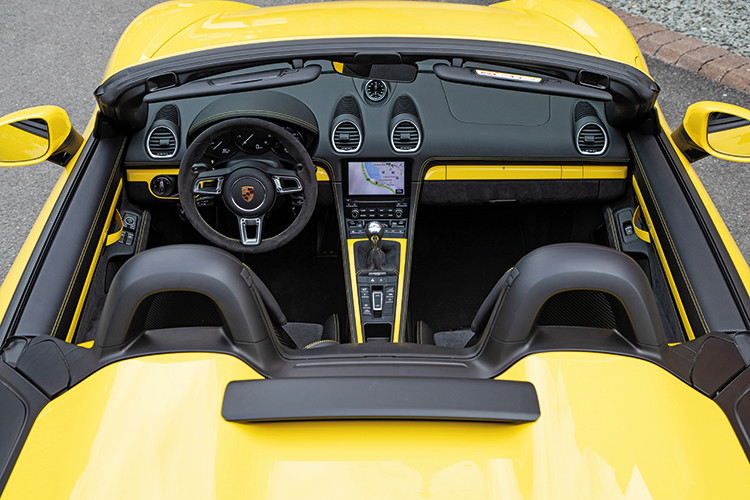 Pushed to and beyond its limit on the track the car holds no nasty surprises. It corners flatly and with almost no roll, whips into and around bends feeling completely planted, and even past its immense grip limits, remains predictable and progressive.

The brakes are easy to modulate and have ferocious bite, refusing to wilt despite lap after flat-out lap. 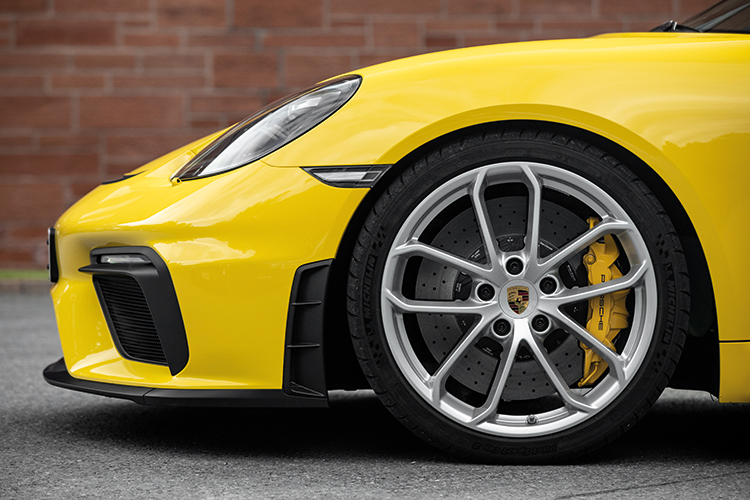 This duo may be Porsche’s entry-level GT models, but in terms of driver involvement and sheer grin-factor they punch far above their weight. Porsche Motorsport has created another masterpiece.

Or two of them, to be precise. 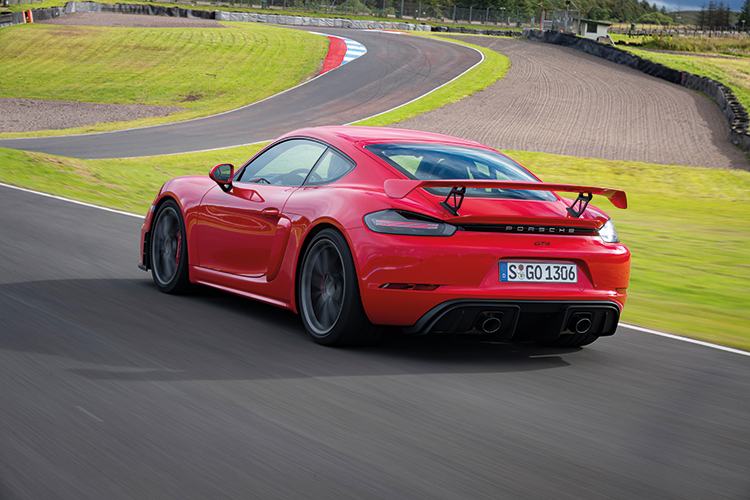