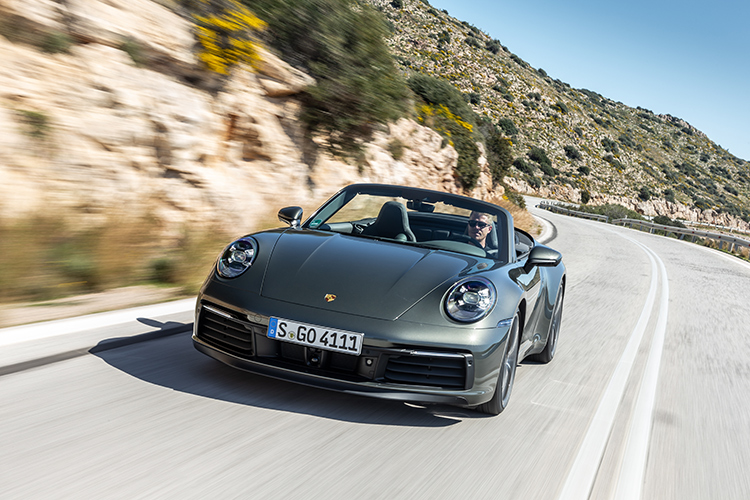 Is the latest Porsche 911 Carrera S Cabriolet a true sports car, or a compromised poseur?

Ragtops are typically the more glamorous versions of two-door coupes.

But with their eye-catching appeal comes extra weight from bracing and roll-bars that compensate for structural integrity and safety’s sake, due to the lack of a fixed roof.

Like its predecessors, it’s a case of evolution rather than revolution.

There are discreet styling cues to distinguish the new 911 Carrera S Cabriolet from the older one.

It is a tad bigger overall, although its wheelbase remains unchanged at 2450mm. 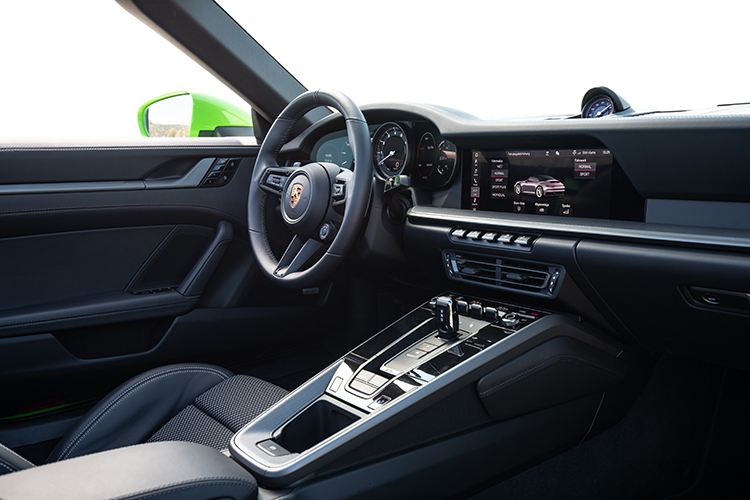 Within the more pronounced fenders are mixed tyre sizes (20 inches in front and 21 inches in the rear), which is a first for a standard 911.

The 911 Cabrio’s front and rear tracks have also been increased by 46mm and 39mm, respectively, giving it a more muscular and planted stance.

Despite having grown larger, the 911 Carrera S Cabriolet has only gotten 55kg heavier, and now weighs in at 1585kg.

The weight gain was mitigated with the use of more aluminium and a motorised fabric roof frame made from rigid but lightweight magnesium.

At a press of a button the soft-top can be raised or lowered within 12 seconds, and at speeds up to 50km/h.

This is approximately two seconds quicker than before. 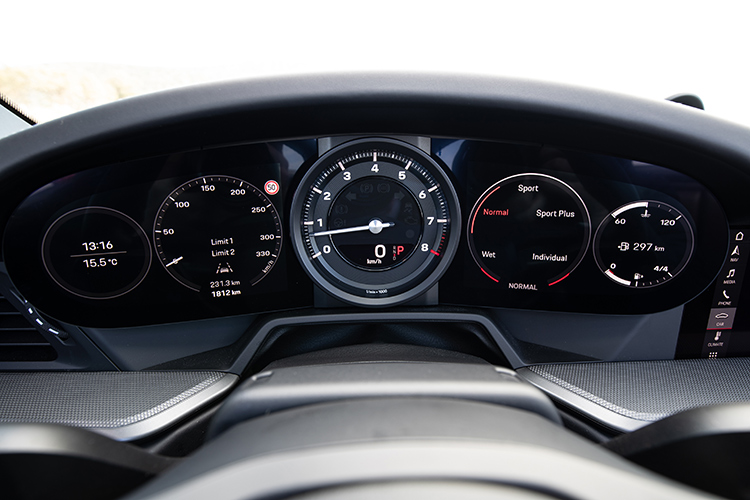 Compared with its 70kg lighter 911 coupe equivalent, performance hasn’t been blunted much.

And compared to the 70kg lighter 911 Carrera S Coupe, the Carrera S Cabrio’s time of 3.7 seconds is just 0.2 of a second behind. It’s inconsequential, really.

Coupled to a new smooth shifting 8-speed (previously seven-speed) dual-clutch transmission with closer ratios, they both offset the weight gain to good effect.

More importantly, the 911 Carrera S Cabriolet’s body rigidity has been improved by 10 percent. 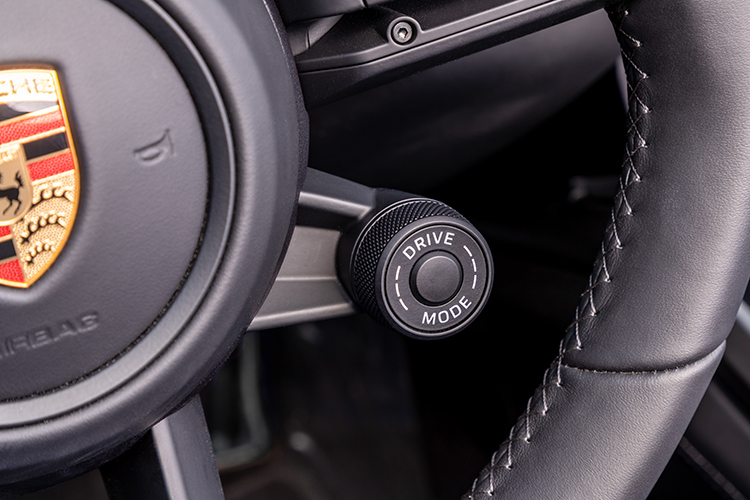 Drive modes can be easily changed with a twist of this dial.

There was no noticeable body flex when traversing undulations.

There was no scuttle shake or rattling over broken surfaces, even with the roof down.

But show the 911 Carrera S Cabriolet a winding stretch of road and it will demonstrate pin-sharp handling.

Our test car was equipped with the optional rear-axle steering, and a more responsive electric power steering for confidence-inspiring quick and precise turn-ins to match.

Where there was a slight tendency to understeer on twisty roads in the previous 911 Carrera S Cabrio, the handling is now more neutral and balanced.

Also contributing to the car’s improved agility are the new chassis, re-calibrated Porsche Active Suspension Management (PASM), Porsche Stability Management (PSM), and Porsche Torque Vectoring Plus (PTV Plus) systems, which are all standard. 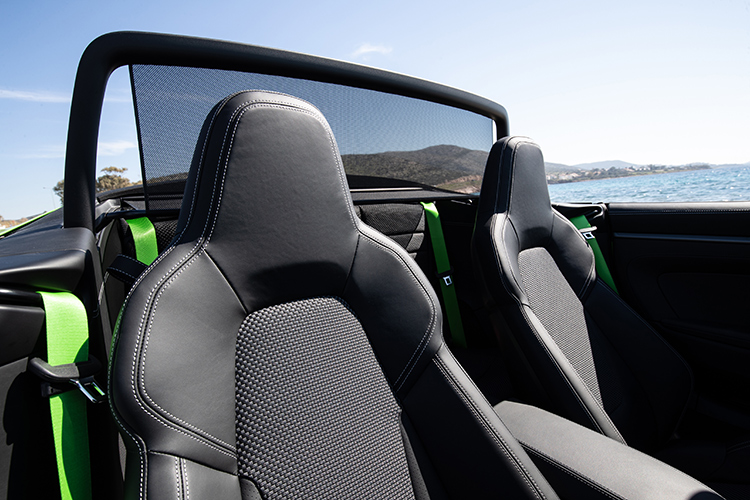 Draught-stopper pops up in under two seconds to save hairdos.

At the same time, the 911 Carrera S Cabrio can still entertain the driver with a little tail wiggling on very fast bends – in a controlled manner, of course.

Meanwhile, the 911 Carrera 4S Cabriolet corners like it’s on rails.

In a sense, that also makes it less engaging to pilot when the going gets fast.

The 911 Carrera 4S Cabriolet was equipped with the optional sports suspension.

Apart from lowering the ride height by 10mm, it gave the convertible a noticeably bumpier ride, especially over less than perfect surfaces. 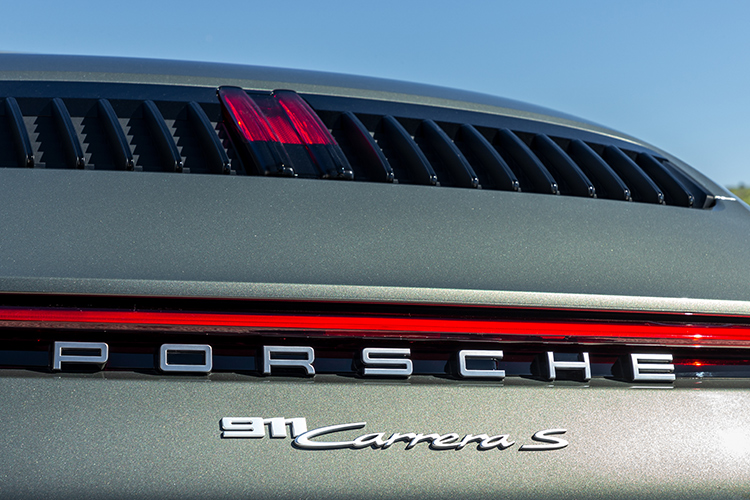 Naturally, the rear-wheel-drive 911 Carrera S Cabriolet with its fine ride-handling balance won me over.

Accompanying the rorty soundtrack from the optional sports exhaust was a delightful symphony of turbo whooshes and flat-6 wails.

Lift off the accelerator, or downshift at speed, and the pop-and-crackle from the tailpipes joined in the chorus.

With the top down, buffeting can make things uncomfortable (and ruin hairdos. Luckily, the wind-deflector can be raised in two seconds to reduce this.

There are more digital screens and fewer buttons. 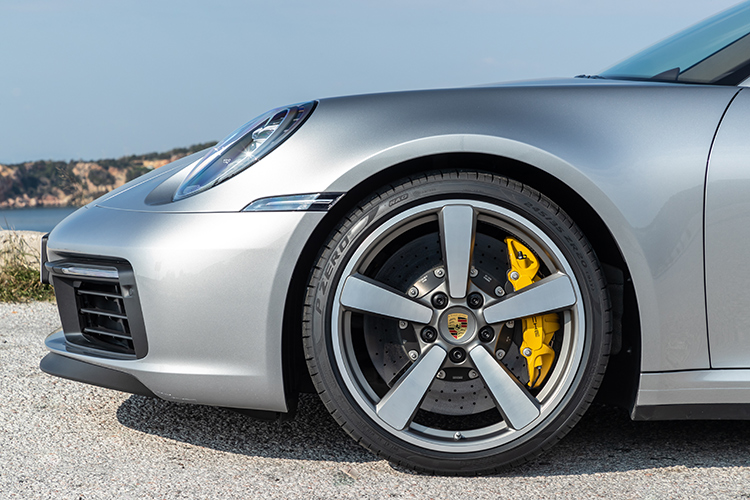 Optional carbon-ceramic brakes will set you back more than S$34,000.

The dashboard features a 10.9-inch infotainment touchscreen alongside a digitalised instrument panel, save for a central analogue tachometer.

Manual gear control is now strictly from the steering mounted paddles-shifters, which does make ergonomic sense.

Like all new 911 models, the 911 Carrera S Cabriolet has an extra Wet Mode that triggers electronic nannies to optimise stability during rainy conditions. Too bad we had no chance to try this out during our sunny drive Greece.

In reality, it’s more like a two-squash-two, as the rear seats are suitable for small children or adult contortionists.

It’s best to use the rear bench for small items instead. Equally compact is the 132-litre front boot, which is sufficient for a couple of duffle bags, but not much else.

Just ticking the option boxes for Lizard Green/Lava Orange paintwork, Rear-axle Steering, Sport Chrono Package, Lifting System (front axle can be raised 40mm to avoid scuffing on ramps and humps), and a Sports Exhaust System will set you back over $50,000.

The 911 Carrera S Cabriolet is faster and more agile than before.

At the same time, it has become more refined and comfortable.

Top up or top down, it’s a sizzler. 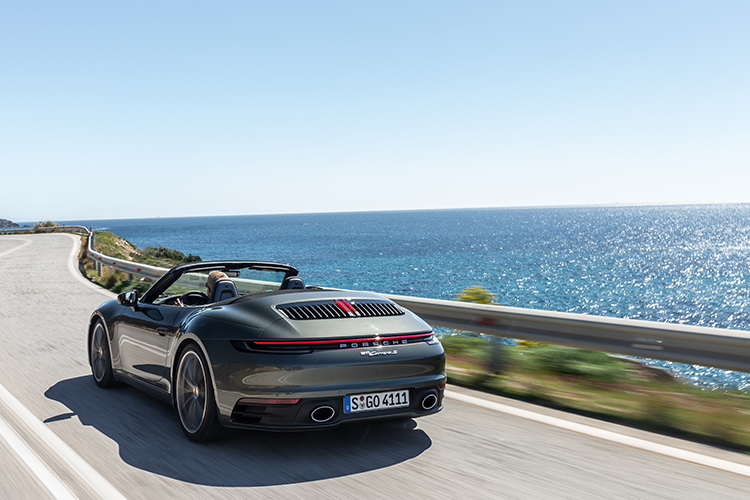