The world’s most prolific sports-car maker has launched another variant of its large third-generation SUV and it is called the Porsche Cayenne E-Hybrid.

An electric motor in the drivetrain gives a useful boost to the forced-induction petrol engine, very much like how the superseded Porsche Cayenne S E-Hybrid was set up, but there are plenty of changes made to the new model.

If you were expecting the same drivetrain as the Porsche Panamera Turbo S E-Hybrid, you might be a little disappointed. For that, you will have to wait for a Cayenne Hybrid with an “S” in its badge. Right now, what we have is the 3-litre V6 coupled to an electric motor and 8-speed Tiptronic transmission.

Still, Porsche is adamant that this plug-in hybrid Cayenne is a performance-focused vehicle which has an added bonus of delivering low fuel-consumption and exhaust-emission numbers.

Arguments still rage on as to whether this category of passenger vehicles need to be performance-oriented at all, but the fact remains that the demand for such SUVs continues unabated.

Acid green brake callipers in all wheels distinguish the hybrid from other Cayenne versions. Otherwise, the new SUV has the same evolved rather than radically altered styling, of which the main element that sets it apart from the last two generations are the slim rear lights linked by a strip running across the width of the tailgate.

It is the inside that has gone through a radical restyling – it’s more luxurious now and exquisitely presented. 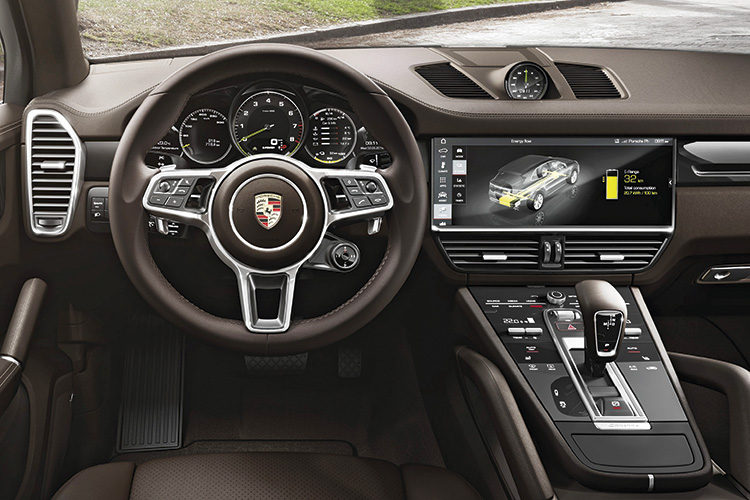 Luxurious, spacious and beautifully built like other third-generation Porsche Cayennes, but with instruments and infographics specific to the E-Hybrid version.

The speedometer and centrally mounted (for the driver) rev-counter are both still analogue instruments, but everything else is presented in high-definition electronic graphics, with a 12-inch colour touchscreen in the centre of the dashboard.

The petrol engine is the same single-turbocharger 2995cc V6 as in the new version of the base Cayenne. There have been several arguments over the origin of this power unit, with some insisting that it is merely a turbo variant of the Audi-sourced supercharged V6 from the previous generation.

Fact is, this engine is not in any way related to the previous Cayenne Hybrid’s V6 and is actually part of the new family of 90-degree V-engines that include the 2.9-litre twin-turbo V6 (Cayenne S) and the 4-litre twin-turbo V8 (Cayenne Turbo).

The difference in the capacities of the V6 (2995cc versus 2894cc) is purely a result of engineering design in optimising stroke and bore for single- or double-turbo configurations.

The electric heart of the Cayenne Hybrid is a synchronous motor with 136hp, a significant increase of power over the previous model’s 95hp. In addition, the newcomer’s battery capacity is up by 30%, without any compromise to the weight of the liquid-cooled battery pack. That is the way battery technology is moving – the energy capacity per unit mass of rechargeable cells seems to be rising every year.

When plugged-in to a 16A 230V supply, full battery charge from minimum takes four hours. Which is, of course, the best way to start your day with the Cayenne E-Hybrid.

A fully charged battery is claimed to run up to 44 kilometres on pure electric power. And yes, it is possible to reach speeds beyond our highway limits (135km/h) before the V6 comes into play. Remember, however, that sustained high speeds will commensurately deplete the battery charge. 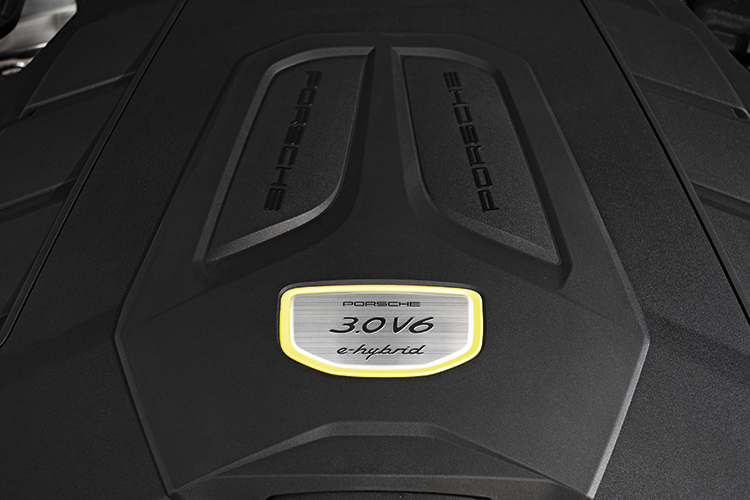 What everyone wants to know is just how the Porsche DNA has honed this large SUV.

This genre of vehicles should have no right to use the word “Sport”, but Porsche claims that the hybrid powertrain in the Cayenne is “tuned” for performance.

The basis for its performance strategy is a control system as used in the 918 Spyder supercar. Which essentially means the electric motor is designed to boost performance no matter which of the four driving modes has been selected, because the engine management possesses the unique feature in ensuring sufficient battery charge at all times.

On the road, there is no denying, the Cayenne E-Hybrid does feel very quick. That an electric motor is providing assistance to the 340hp petrol engine is never evident because of the seamless collaboration between the two power sources.

You might think that the 440hp Cayenne S with twin turbochargers might do a similar job without the added complication of electrical components. But bear in mind the not-insignificant savings in petrol consumption, a major factor in any hybrid vehicle.

Porsche claims that in a mix of city and highway driving, the hybrid Cayenne can achieve a 95-octane petrol consumption figure as low as 3.2 litres per 100km. This figure, based on the New European Driving Cycle (NEDC), has been known to be unrepresentative of real-world driving efficiency, but even if you double the claimed figure, this large and powerful SUV makes a clear case for itself. 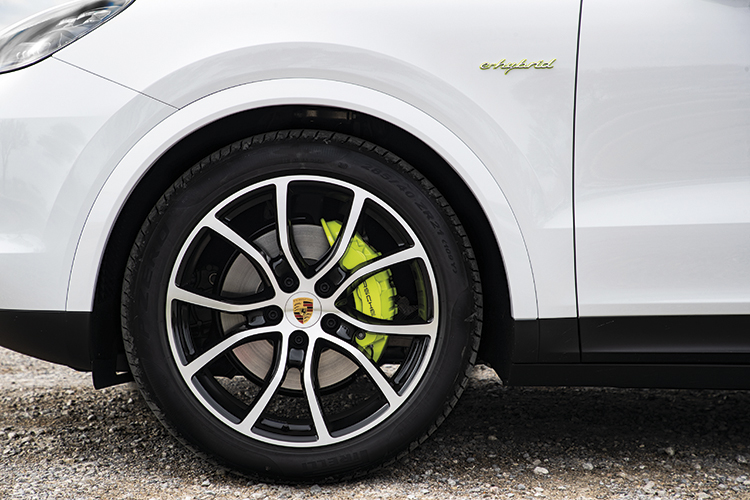 When E-Power mode is selected (the standard Sport Chrono means there is the mode switch on the steering wheel you also find in 911s), the Cayenne E-Hybrid will run in purely electric mode as long as you are not exuberant with your right foot. This way, for any city driving of about 30km (44km is the maximum claimed), the Cayenne will not use a drop of petrol.

The system also offers the option of Hybrid-Auto for optimised electric power intervention, Sport that prepares throttle response and chassis for more energetic driving, and, surprisingly, even a Sport-Plus mode which maintains a reserve battery charge for maximum electric-motor boost.

Still want more performance? Yes, there is that Sport Response button in the centre of the Sport Chrono selector on the steering wheel that gives 20 seconds of a relentless burst of acceleration.

If you drive the Porsche Cayenne E-Hybrid to Kuantan in Malaysia on two-lane roads, you would absolutely love this little black button. It is the quickest way to overtake slow or fast vehicles.

Still, there is just no running away from size and weight. The Cayenne is obviously not 911-nimble, but bearing in mind this is an SUV after all, what it offers as a sporty drive is simply remarkable.

The test-car was fitted with the optional air suspension which, besides offering the option of different height settings, provides an uncanny level of ride comfort. Unfortunately, I did not have the chance to try a Cayenne with steel springs to be able to compare.

Air suspension or not, the Porsche Cayenne E-Hybrid is an impressive piece of work. Its interior is spacious, high-tech and beautifully built, but best of all, the Porsche SUV offers a unique blend of dynamism and frugality that is hard to beat in this segment. 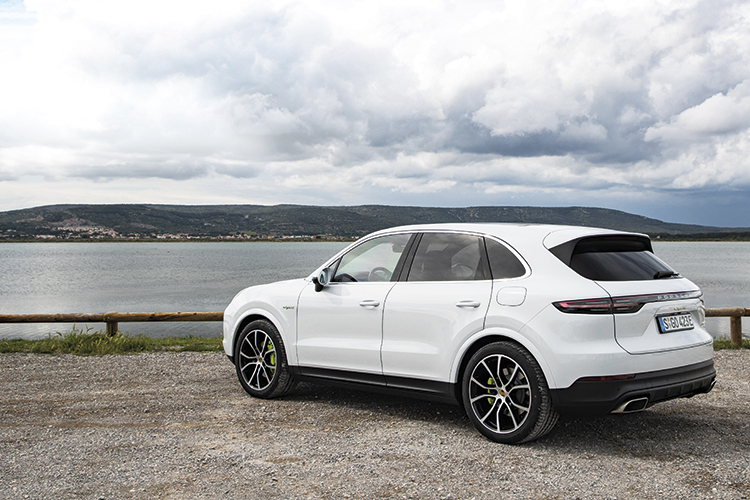 Porsche’s new petrol-electric SUV offers a unique blend of dynamism and frugality that is hard to beat in this segment.

Check out the Porsche Cayenne E-Hybrid for yourself