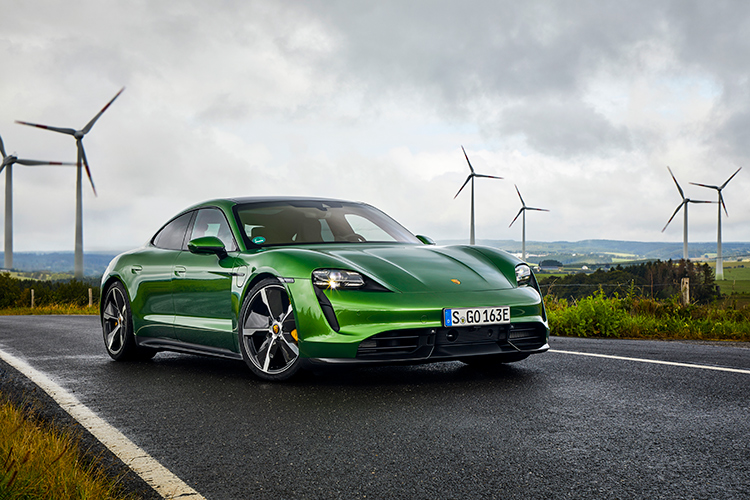 The test-drive route from Innsbruck in Austria to Munich in Germany spans some 700km, with more than one-third being narrow, twisty roads which barely accommodate two cars side by side.

Having so many of such stretches is befuddling, when the car at hand is the Porsche Taycan, an electric GT powered by a motor on each axle.

Those motors – a bigger one in the rear paired with a two-speed transmission and slip differential; and a smaller single-speed one in front – are powered by a 93.4kWh lithium-ion battery running an 800-volt system.

The slightly tamer Porsche Taycan Turbo gets 460kW and 850Nm, with its overboost capped at 500kW. 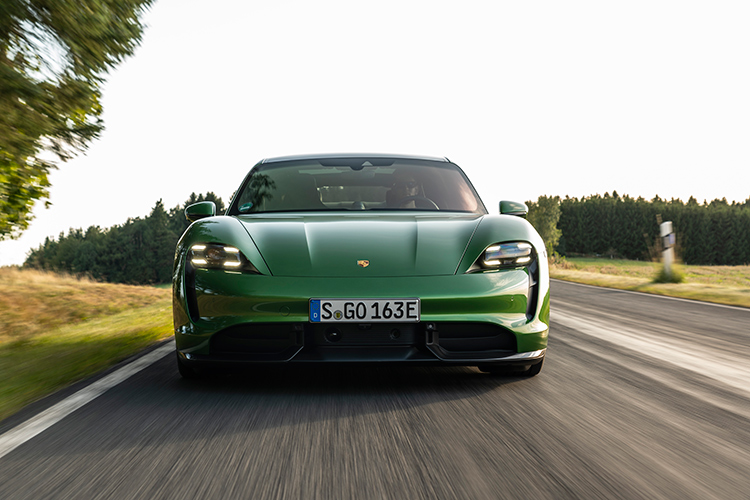 The outputs are clearly quite ample, sending the Turbo S to 100km/h in 2.8 seconds (equalling the monumental GT2’s neck-snapping sprint) and the Turbo in 3.2.

The prodigious output is not an issue when roads turn to noodles. But the car’s dimensions are. Just slightly smaller than the Porsche Panamera, the Taycan is a big car, with a 2.9m wheelbase.

Great as a four-seater barrelling down the autobahn, but not so great being chucked around chicanes. 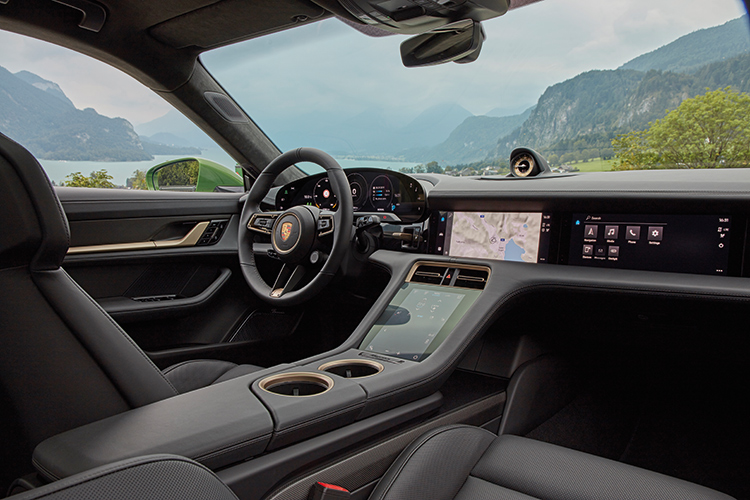 The conspiracy theorist in me reckons the route was planned to preserve range. Even though the Porsche Taycan has a range of around 400km on a full charge, and each half-day test-drive segment is well under 250km, high speeds can compromise its mileage severely.

But the twisty bits effectively manage average speed, averting the possibility of having to summon a flatbed tow-truck between mountains.

Despite the challenging topography, the Porsche Taycan does not fail to impress. Sure, there are many moments when its 2.3-tonne body seems to rebel against the steered course, and others when its big wide wheels are at the road’s edge, but the car manages to keep its cool. 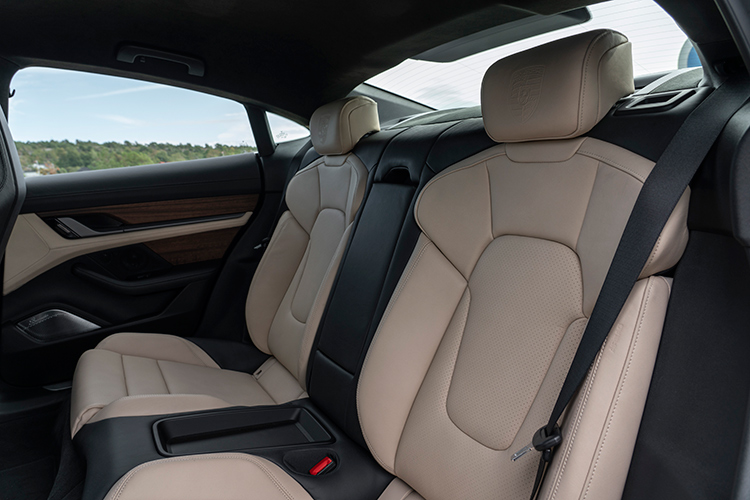 Along one segment, it gives chase to a local Hyundai i30 N, which fails to shake the big Porsche off its tail as both cars go from bend to bend on a roller-coasting mountain road.

The test route, with a stopover in the heritage town of Mondsee, does not offer many opportunities for extending the Taycans’ beefy drivetrain.

Most times, it hovers between 80km/h and 120km/h – a range which does not differentiate the Turbo from the Turbo S much. Both cars are effortless, even in Range (or Eco) mode.

In a fairly free-flowing highway (rare in this test-drive), I manage to come close to 200km/h. 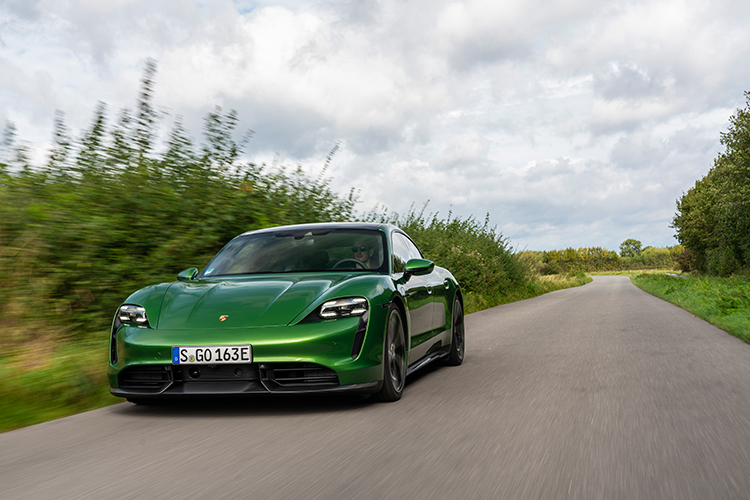 At that speed, the Porsche Taycan is resolutely planted, with its long wheelbase, low centre of gravity (nearly 10% lower than the 911’s), low drag-coefficient (0.22 for the Turbo) and ballasted heft all working in its favour.

It is one of the most stable cars I have driven at that speed. And the amount of reserves it has at that velocity is amazing. Indeed, it feels ever ready – nay, eager – to pick up the pace at any speed. That is what you get with the immense torque from its high-revving motors.

But there is hardly any opportunity to try out Launch Control. One crops up, but I am not at the wheel. Ben Chia of Business Times is. I give the quiet young man the all-clear, and he puts the car in Sport Plus mode, stomps on both pedals, and the cockpit flashes the Launch Control ready signal. 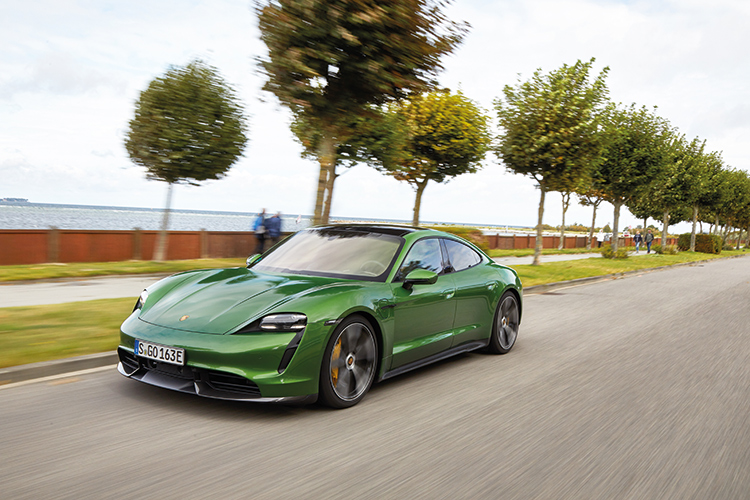 He lifts his foot off the brake pedal, and my head flies back to hit the headrest. Almost immediately, I feel as if I might pass out. Ben must have felt the same way, because he eases off at 80km/h, giggling. I giggle, too.

And that’s with the Taycan Turbo, which has 850Nm of shove. My head spins again as I imagine what the Turbo S’ 1050Nm might have done.

No wonder the overboost is only for 2.5 seconds. That’s really all you need to attain nirvana on a drag strip. 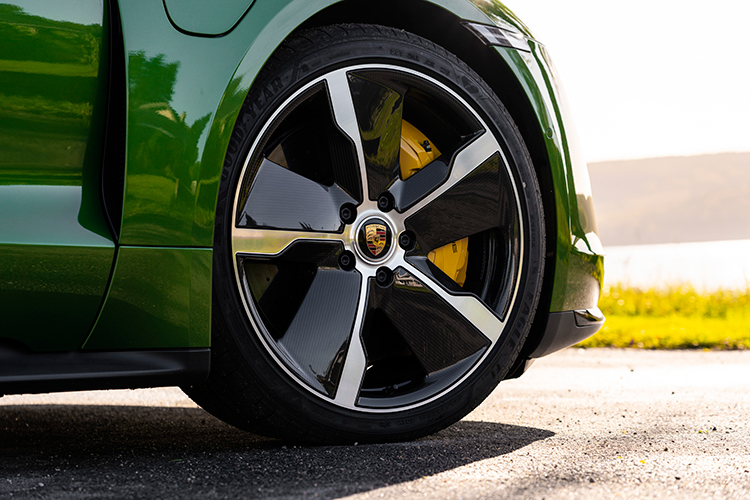 Its ballistic proposition aside, the Porsche Taycan stands out by being quite unlike any other electric car today. It is one which feels, drives and sounds closest to a petrol-powered car.

And that is a big deal. Because electric vehicles tend to come across a little like glorified golf carts. They also tend to be homogenous in their driving characteristics.

They may differ in power and performance, but when it comes to how they make you feel at the wheel, they are often as cold, unwavering and as familiar as vacuum cleaners.

The Porsche Taycan is not like that. It warms up to you the moment you see it.  Even as it is similar to the Panamera is size, it is closer to the 911 in form. In fact, it looks like a four-door 911. 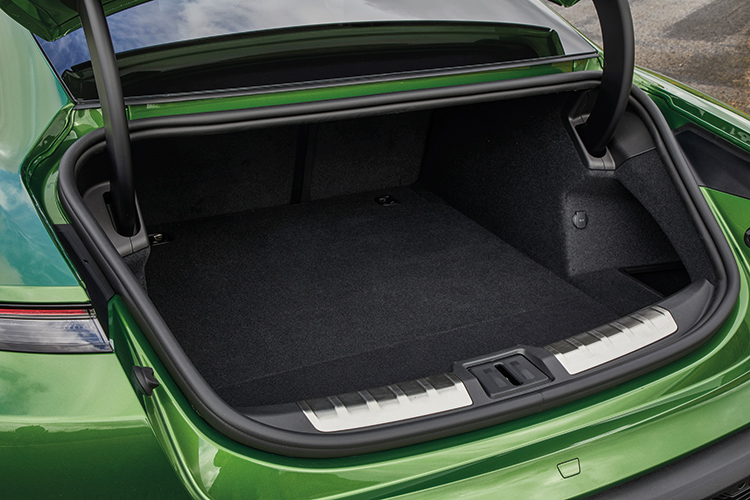 It has the practicality of a four-door, too. It has two stowage compartments. The rear fastback motorised tailgate opens to a sizeable boot with a touch of a button, while the front manual bonnet pops (with a caress of the Porsche badge) to reveal a smaller compartment.

Going with its emotive styling is a driving sensation akin to what a well-sorted internal combustion car offers.

The Taycan’s ability to offer this has to do with drivetrain. Its two motors work in tandem or individually as the car sees fit. When extra traction is needed, it is an all-wheel-drive.

Under normal conditions, it is a rear-wheel-drive. And when the car is cruising along at high speeds in Range mode, it switches to front-wheel to conserve energy. 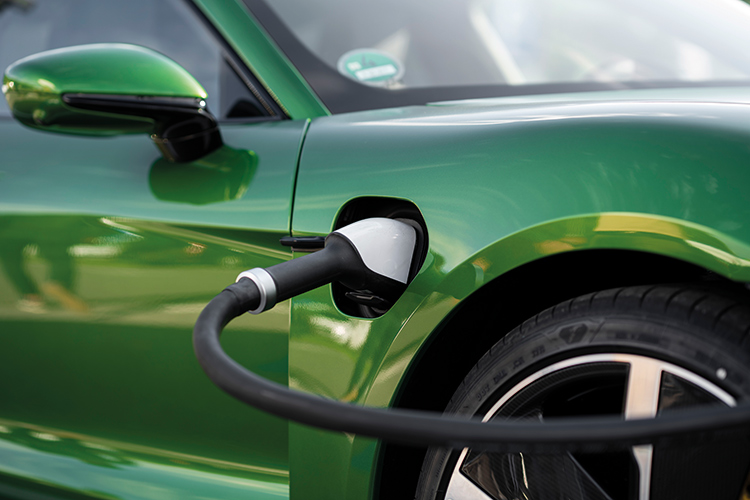 When in FWD, the car still supplies a wee bit of electricity to the rear motor so that it does not drag. Porsche says this method is better than mechanically decoupling the motor from the wheels, which may be more efficient but slower in response should the car require rear traction once again.

This philosophy is to be expected of Porsche, one of the most enduring performance marques around.

That is also why the Porsche Taycan does not sound like an EV. Its soundtrack is synthesised – Porsche says it took the sounds of the motors, eliminated the high pitches and amplified the low frequencies. The result is a note you swear is from an exhaust – especially on the outside. 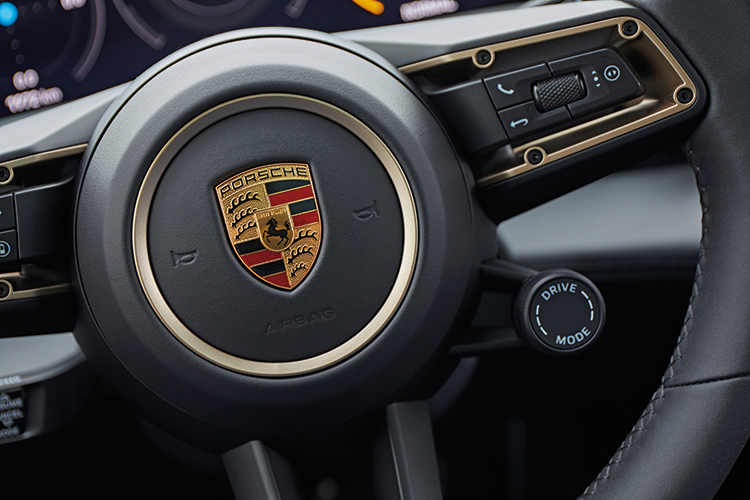 Inside, you hear a mix of electric motor whine and soft drone of a 4-cylinder in relaxed state.

The aural feedback alters with gear changes, giving you the much sought-after sensation of a sporty car as it downshifts. No other electric car tested thus far offers this.

Its two-speed transmission shifts entertainingly as you tackle the twisty bits, again giving you the ebb and flow characteristics of a regular engined car.

The Porsche Taycan does not offer one-pedal driving at all. Instead, you use the brake pedal to slow down or stop – again like a regular car. This is because Porsche wants to preserve some driving purity and because it believes that coasting can also be efficient. 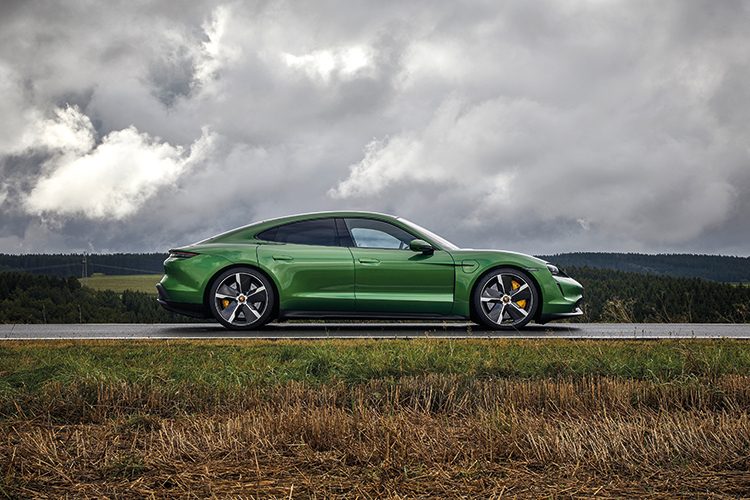 That does not mean it does not have recuperation. It does, with Sport Plus mode giving you the highest recuperation rate. By virtue of this, the resistance you get when you lift off acts like engine braking – useful should you play catch with a hot hatch along a hilly span.

While the Taycan is Porsche’s first modern electric car, it is not its first. The 1898 P1 was. With the Porsche Taycan, it has come full circle in 121 years.

A base variant Porsche Taycan will follow the Turbo S and Turbo. Could it be a single-motor rear-wheel-drive? We will find out soon enough. 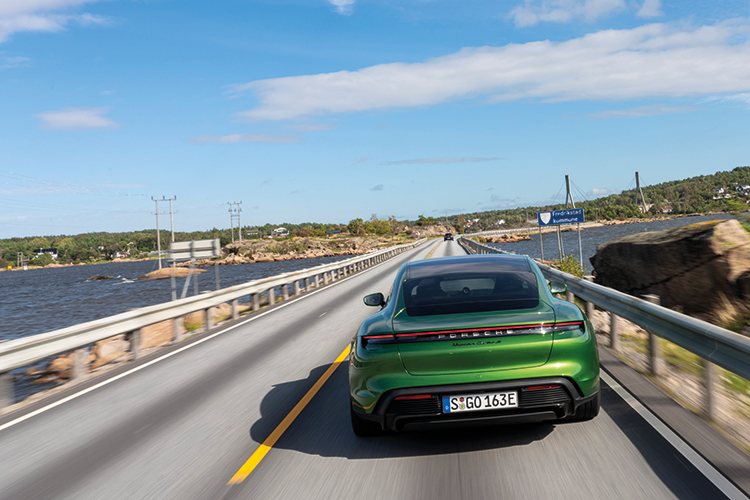