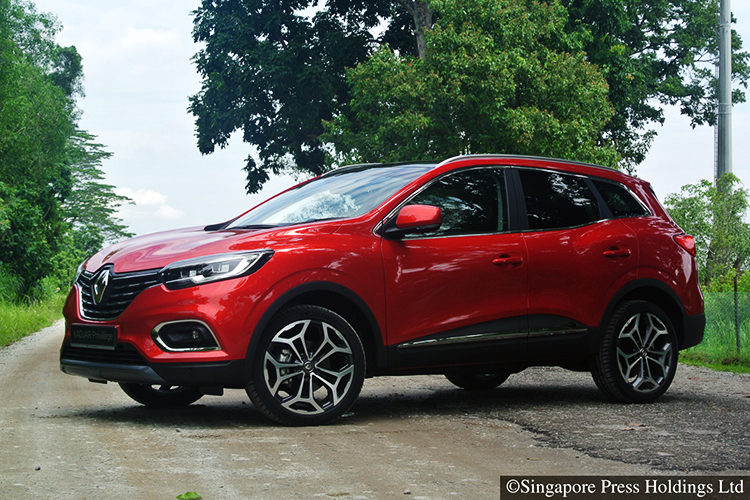 When the Renault Kadjar compact crossover was first launched here in January 2016, it was a mixed bag.

While it drew fans with its sharp styling, practicality and generous equipment level, its 1.5-litre turbo-diesel fell short of the expectations.

In mid-2017, a 1.2-litre turbocharged petrol engine version was introduced here to widen its appeal, but that too fizzled out barely six months later.

After disappearing from Singapore for about 11/2 years, the Kadjar is back after a mid-cycle facelift.

And the comeback kid has a refreshed look and a new heart.

The front and rear bumpers have been redesigned.

The turn indicators and daytime-running lights are now housed within a full LED headlamp cluster, giving the car a premium look.

My favourite angle of the car is the view from the rear.

The bumper now comes with integrated skid plates and mock twin-exhaust outlets, making the car less dowdy than its predecessor.

The cabin is mildly refreshed.

There is a new 7-inch infotainment system on a glossy touchscreen.

The temperature control knobs now come with digital readings within the dials.

These make the cabin less spartan than before.

The most important part of the facelift cannot be seen, it has to be felt as the Kadjar gets a completely new powertrain under the hood.

It is now serviced by a 1.3-litre turbocharged petrol engine that the Renault-Nissan alliance jointly developed with Daimler. 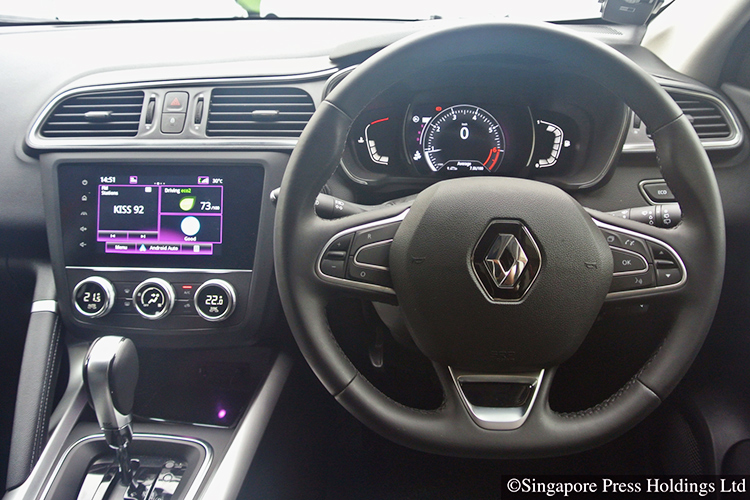 The engine is found in the new Mercedes Benz A-Class hatchback.

In the Kadjar, the engine is paired with a seven-speed dual-clutch gearbox, up a cog from its predecessor.

This combination completely puts to rest the sub-par drive – the biggest weakness – of the Kadjar before the facelift.

On the move, there is a greater sense of urgency from its responsive throttle.

Left in automatic mode, the gearshifts are decently quick and decisive, although it tends to upshift a little too early.

It already hits the tallest seventh gear at around 80km/h.

The new engine may be modest in capacity, but it impresses with its strong torque at low speeds and refinement at high speeds.

Still, the car is set up for comfortable cruising rather than spirited performance.

There are no sporty bits like paddle shifters or a sports driving mode.

But there are creature comforts such as a dual-zone air-conditioner (with rear vents) and a panoramic glass moon roof that makes the cabin feel more spacious.

The squarish, practical, easy-to-load height of the boot adds to its overall appeal.

The suspension is decidedly soft, riding over and soaking up poorly paved sections of Lim Chu Kang Road during my test drive.

While there is some degree of body roll when I drove the Kadjar round sweeping curves in Neo Tiew Road and tight corners in Mount Faber Road, it was not enough to induce motion sickness.

Over a 106km test drive, with about 80 percent on expressways, the Kadjar recorded a fuel consumption of 14.3km/L, not too far off the official figure of 16.9km/L. 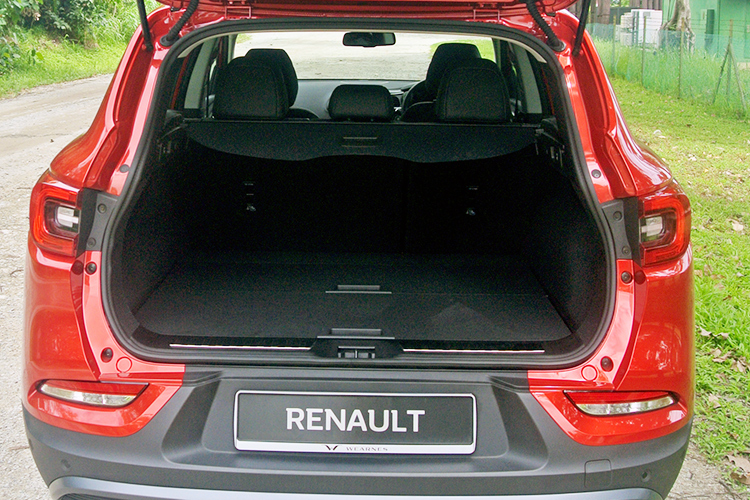 Its on-board computer gave me a 73/100 score for my fuel-saving driving style.

It faces rivals like the Nissan Qashqai, which it shares similar underpinnings with, and the newly launched Toyota RAV4.

It is arguably the most stylish-looking choice in the field.

The new powertrain gives it an edge over other rivals.

As such, the comeback car has a much better chance of success than its predecessor.

This is also because besides the better-equipped version reviewed here, there is another entry-level car in the pipeline.

It does without frills such as the moon roof, full-LED headlamps, motorised driver’s seat and 19-inch rims, and costs about $10,000 less.

The order book for the better-equipped car is open.

That said, Renault agent Wearnes Automotive is planning to launch both Kadjar variants together in the third quarter of the year.