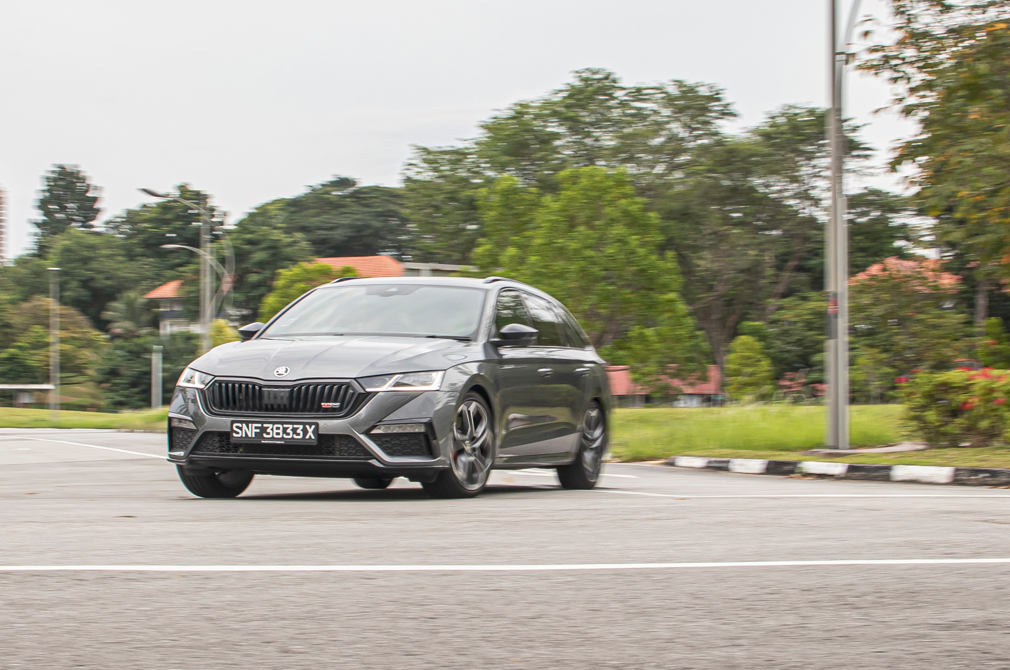 Can it be even better? Yes. More power usually does the trick. But the engineers didn’t just stop there. They gave the Octavia Combi better handling and upgraded components, before embellishing it with the “RS” badge.

The RS badge has two purposes. Firstly, it informs other knowing drivers that this model is distinct from its “regular” brethren. Secondly, it raises expectations.

In this case, the RS moniker brings to mind images of fire-breathing and tyre-shredding machine that’s intent on consuming every last drop of petrol before the world runs out of fossil fuels.

However, the Octavia Combi RS doesn’t fit that description. It is instead an accomplished estate that lends itself well long drives interspersed with bouts of spirited driving.

The Combi RS looks edgier and more dynamic than the regular Combi, thanks to its higher bonnet and more angular front bumper. The grille, along with the window frames and roof rails, are all also finished in gloss black.

The rear end gets the same treatment. There’s a sharper rear bumper with trapezoidal exhaust finishers, which the normal Combi does not have. In addition, the badges are also all in black. The tyres are great and the wheels look dynamic, but the brake callipers can be better.

Everything looks swell aside from the brake callipers. The red hue is cool, but surprisingly, they look plasticky when viewed from afar. If someone told me they were 3D-printed, I might believe him. Surely an RS model deserves better-looking stoppers.

The interior is enticing, though. There are sports seats with fixed headrests in front, a three-spoke (instead of two-spoke) steering wheel with a dimpled finish, and plenty of red contrast stitching.

An Alcantara-like material called Suedia is also used to trim part of the dashboard.

Finding the right driving position is easy, and the seats are both well-padded and supportive. The instrument panel even includes an RS-specific display (that’s a nice touch). 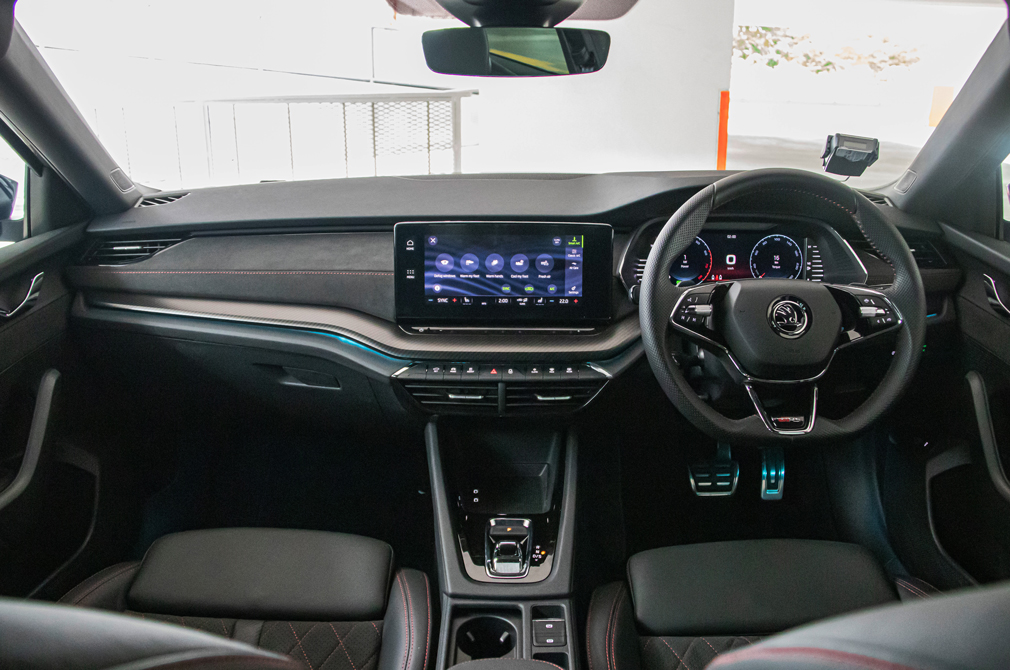 You also get paddle shifters as expected, but I would’ve liked to see them in alloy instead of plastic. In keeping with the darker theme, Skoda could have also ordered them in black.

Just likes its regular sibling, the Octavia Combi RS offers plenty of cargo capacity and flexibility. Even with the rear seats up, the boot offers 640 litres.

Fold the seatbacks and the volume rises to an even more useful 1,700 litres. These minimum and maximum figures are 40 litres and 45 litres more than what the already generous Octavia fastback offers.

They key difference between the RS and non-RS model is how much more fun the former is compared to the latter. The Octavia Combi is a sweet drive, but if you want more sparkle, then it’s the RS model you should consider.

Now, though the figures look good on paper, the car’s performance gain is more modest, as its 6.7-second century sprint time is just 1.9 seconds quicker. 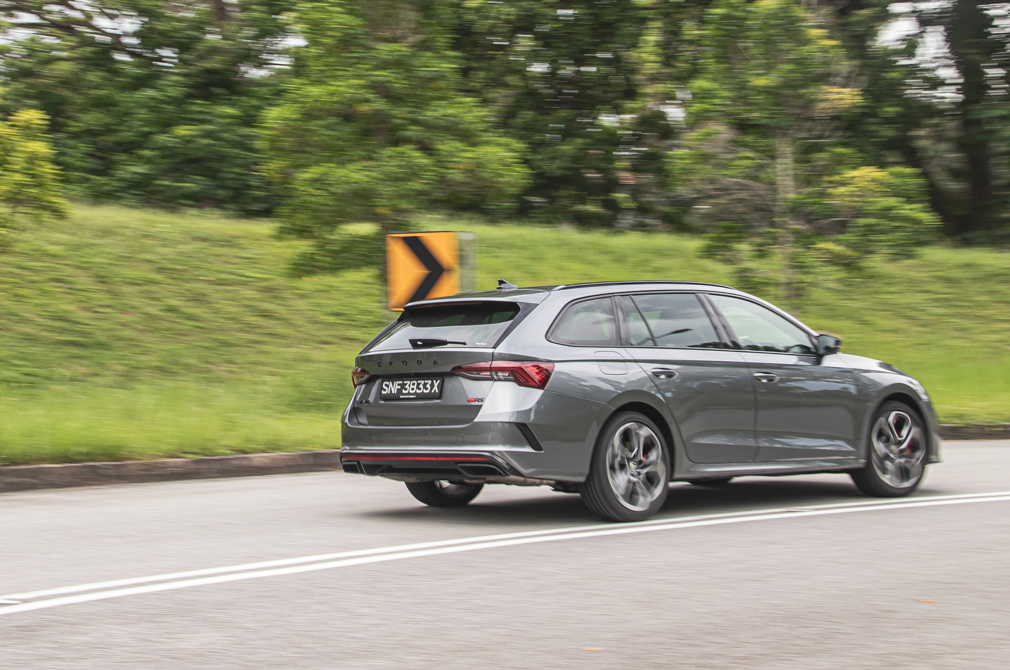 So, the estate is not slow, but it’s also not exactly fast. I would also like a proper rorty soundtrack right out the box, instead of a synthetic one. Thankfully, it can be switched off.

But if speed is all you’re concerned about, then the Octavia Combi RS wouldn’t be on your shopping list anyway. A more accurate way of viewing this car is to see it as a sportier version of the regular model.

With that mindset, the Combi RS is a joy to pilot. Its 7-speed dual-clutch gearbox is quick to engage off-the-line, so low-speed crawls (which are too common these days) aren’t a chore. 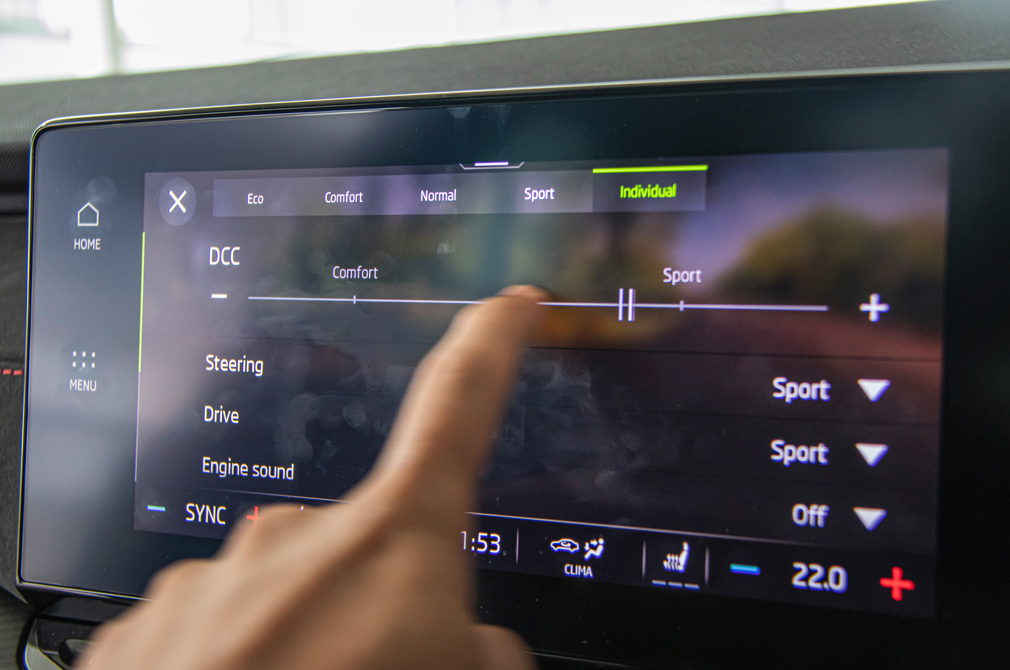 DCC menu lets you fine-tune the damping to your liking.

The car’s ride-handling balance is good, and can be tweaked using Dynamic Chassis Control (DCC). Slide the setting towards the left for a softer ride and towards the right for stiffer damping. I found that keeping it in the middle was the most optimal.

In this setting, the Octavia Combi RS offers more a positive turn-in, with better feel from the nose and helm. It certainly makes the non-RS model feel tentative in comparison.

Helping the estate in this regard is the multi-link rear suspension. It makes the car more obedient to the driver’s inputs, and makes the rear end feel more connected to the front.

The brakes are another plus point. They are strong and the pedal feel is firm, which is a solid improvement over the previous model, whose pedal feel is like stepping into a bowl of mashed potatoes.

That said, this is not an estate I would choose to tear-up B-roads in. As adept as it is, its size makes it more comfortable tackling sweeping corners as opposed to very tight bends.

To me, what’s compelling about the Octavia Combi RS is that it is even more complete than its regular sibling. Notwithstanding the price, it has a sublime combination of sportiness and practicality, tractability and agility, with the looks to match. 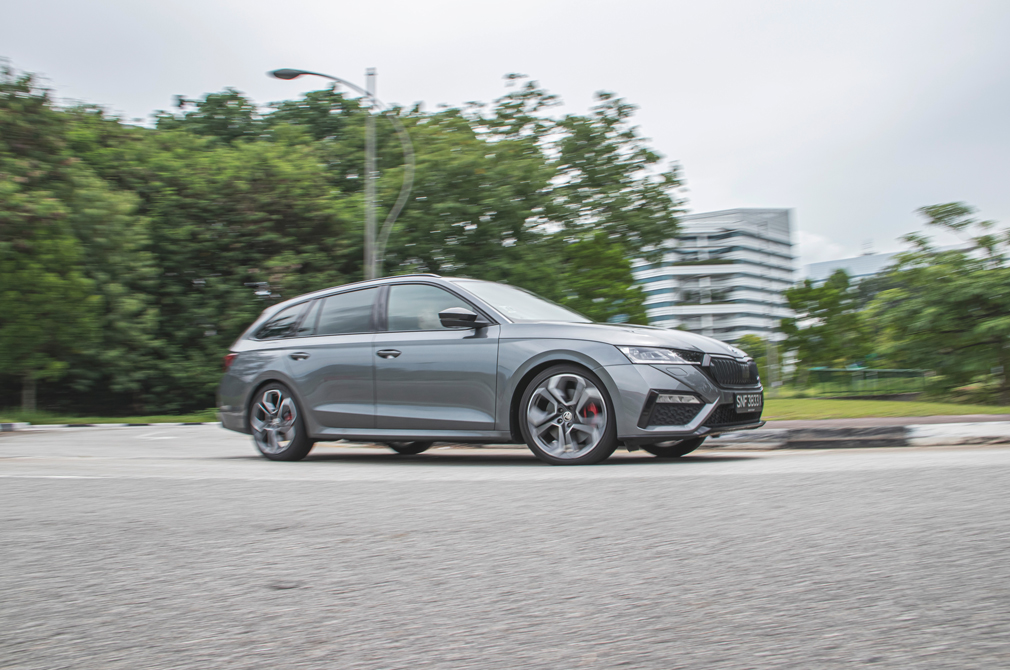