Air suspension: How does it work and what are its benefits? | Torque
Loading posts...
0 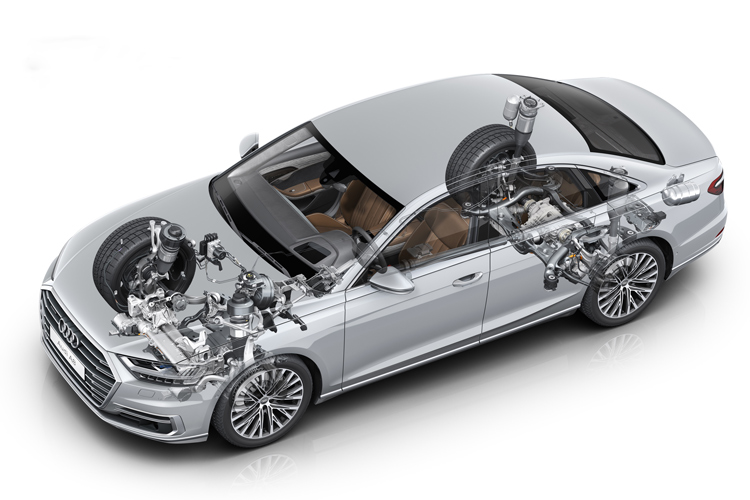 Air suspension? No, this Audi A8 has an electromechanical system.

Air suspension is available and/0r sometimes standard on upmarket, luxury models. But how exactly does this technology work?

Before we really get into it, let’s discuss the component primarily responsible for ride quality: the damper.

The damper is an oil-filled tube with rod and piston, and serves to attenuate any oscillatory motion.

Both these components are physically constrained to just one setting, which the engineers have determined to be the best compromise between comfort and handling.

Substituting the steel coil spring with a cushion of air (this is what air suspension essentially is) introduces a useful degree of adjustability.

In place of the spring is a bellow (usually made from rubber) filled with air. Under load, the bellow is compressed, causing a decrease in volume and an increase in pressure.

If more air is pumped in, the bellow is reinstated to its normal volume or, more crucially, its normal height. As an air spring, the increased pressure means increased stiffness, which is necessary for the added weight.

Air suspension systems now feature in numerous upmarket saloons, sports utility vehicles and station wagons. Some of them have air suspension only at the rear.

The advantage of this is even when the boot (or load bay) is fully laden, the vehicle stays level.

Supporting the air-filled bellows or air suspension are a number of components not present in the regular steel-sprung suspension system.

One of them is an electric or belt-driven compressor to supply air into the bellows when called for. What “instructs” the compressor is a level sensor.

In the 1968 Mercedes-Benz 300SEL 6.3, a lever between the body and suspension arm directly controls a valve to either fill or release air from the bellows.

This sounds more complicated than it is – the setup is actually simple and sturdy. It was quite reliable and only required an overhaul after 100,000km or so.

The latest air suspension systems, such as those used in flagship Range Rovers and Rolls-Royce Phantom limousines, rely on plenty of electronic hardware and a solid-state controller (or an ECU).

In fact, suspension modifications in certain cases could cause a deterioration in both ride comfort and handling. Rarely, if ever, can these two dynamic characteristics be improved simultaneously.

The two most critical components in a suspension are the spring and damper. In the most common design, the spring is made from a spring-steel rod formed into a helical coil – hence its name “coil spring”.

As a result, level-sensing and ride-height corrections are accomplished in a much shorter time, while on-the-go adjustments are made continuously.

Car suspension too stiff: What could be the cause?

One major advantage of air suspension is its ability to keep the car’s ride height constant. This is because it can control the volume of the air in the bellows.

So, despite varying passenger or luggage loads, the vehicle’s wheel geometry (camber, castor, toe-in/out) is unaffected. This benefits driving comfort and overall handling.

Ride height control is also selectable on some models, usually sports utility vehicles. For off-roading, selecting a raised ride height sends a signal to the compressor to pump more air into the bellows.

Conversely, releasing the air lowers the vehicle, which will enhance aerodynamic efficiency at high velocities. Speed-dependent controllability is usually part of the modern air suspension system.