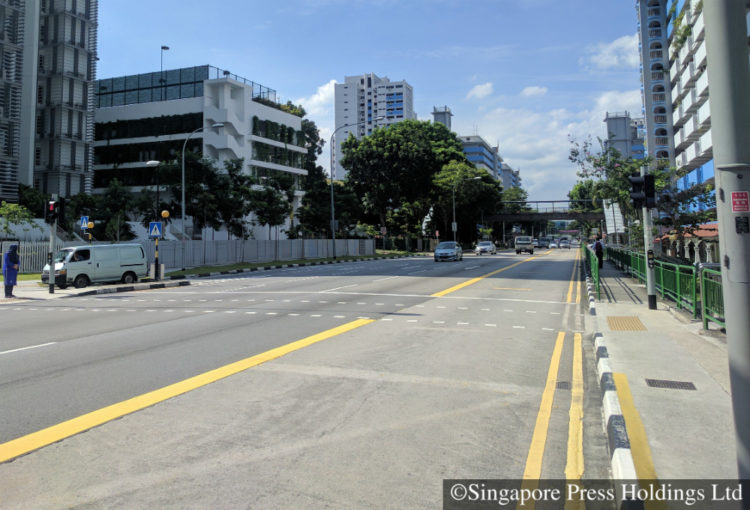 The signalised crossing at the junction of Bendemeer Road and Whampoa East was commissioned in January last year. Before that, jaywalkers would dash across the road instead of using the overhead bridge about 100m down the road.

Every time she heardtyres screeching or car horns blaring from her kitchen window, Madam Shameem Basheer would fear the worst.

The 32-year-old would peer out at the junction of Bendemeer Road and Whampoa East, wincing and gasping as jaywalkers – including children and elderly pedestrians – dice with death. She said this had been going on for some years.

Madam Shameem estimates more than 50 pedestrians dashed across the road each day, choosing not to use the overhead bridge 100m away.

A pregnant woman in her second trimester died after she was hit by a public bus at the very spot that Madam Shameem had been watching daily. The gruesome memory has haunted her ever since. She said she had written to the Land Transport Authority (LTA) two years before the accident and had also spoken with her Member of Parliament during house visits to appeal for traffic signals at the junction.

Said Madam Shameem: “Until the accident, they had always said that it was not feasible to install traffic lights there. But I am very glad they changed their mind.”

The spokesman added that LTA had been studying the suitability of a signalised pedestrian crossing at the junction as crossing the overhead bridge was “challenging for seniors or families with strollers”.

Last month, a 10-year-old boy was hit by a car in Yishun Ring Road near a bus stop and suffered head injuries.

One witness said many pedestrians would cross the road at the same spot after alighting from the bus.

Most motorists cite Geylang and Little India as hot spots for jaywalking due to the high levels of pedestrian traffic. However, unlike Bendemeer Road, there are many signalised pedestrian crossings in Geylang Road and Serangoon Road.

Bendemeer Road is flanked by more than 100m of green railings from the Whampoa East junction, to direct pedestrians to the overhead bridge.

Said Madam Shameem: “It didn’t work (at first), so they kept extending the barriers. But they could not install barriers at the carpark exit at that junction, so that was where people ended up jaywalking.”

Before building pedestrian crossings, LTA said it considers various factors, such as vehicular and pedestrian volumes, site layout and configurations, as well as the connectivity to major transport nodes and community amenities.

“The pedestrian is the most vulnerable road user and, hence, his protection is always considered as the first priority in designing any traffic system,” said Mr Menon, who co-authored two academic papers on pedestrian facilities.

But road infrastructure has limits too, especially if pedestrians choose not to use these features.

This is where public education comes in. Said Singapore Road Safety Council (SRSC) president Bernard Tay: “To engage the community and help change unsafe behaviour on the roads, SRSC will continue to work together with the TP, LTA and other relevant stakeholders to promote road safety education, increase road safety awareness for pedestrians and other road users through our road safety campaigns.”