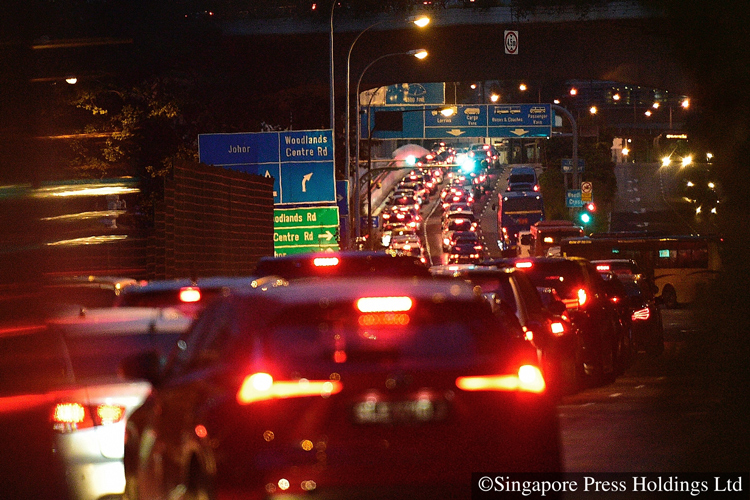 ICA warns of traffic jams – Long lines of cars at Woodlands Checkpoint Exit 10B on 15 December 2018.

The Immigration and Checkpoints Authority (ICA) has advised Singaporeans travelling to Malaysia by land during the Chinese New Year holidays next week to be prepared for delays.

ICA added that travellers can also help to smoothen the clearing process at checkpoints, noting that its officers have encountered many instances of travellers showing up without a passport or with the wrong passport.

“With security checks, coupled with a large number of travellers using the (land) checkpoints at the same time, traffic build-up is inevitable and delays can be expected,” the ICA said in a statement yesterday, adding that security remains its “top priority”.

Among the behaviour the ICA cited that could prolong the clearing process are travellers showing up with invalid passports, people bringing in prohibited or controlled items like firecrackers and bak kwa (barbecued pork slices), and motorists jumping traffic queues.

Travellers who have reported lost passports to the ICA should not attempt to use them at checkpoints even if they are later found. The passports would already have been cancelled by the authority.

Those who use passports already declared lost can be fined up to $10,000, jailed for up to 10 years, or both.

A lost passport must be surrendered to the ICA within 14 days of it being recovered, or travellers could risk a fine of up to $3000, a jail term of up to two years, or both, the authority added.

The ICA advised those bringing back dutiable or controlled items – such as eggs, bak kwa and potted plants – to proactively make declarations to ICA officers rather than wait for checks by officers.

On the common practice of queue-jumping at checkpoints, the ICA said it can cause “severe congestion and compromise motorists’ safety”.

It said: “Motorists are reminded to observe traffic rules, maintain lane discipline at all times and cooperate with checkpoint officers to ensure a safe environment at the checkpoints.”

About 415,000 travellers use the land checkpoints daily, but this usually increases during festive periods.