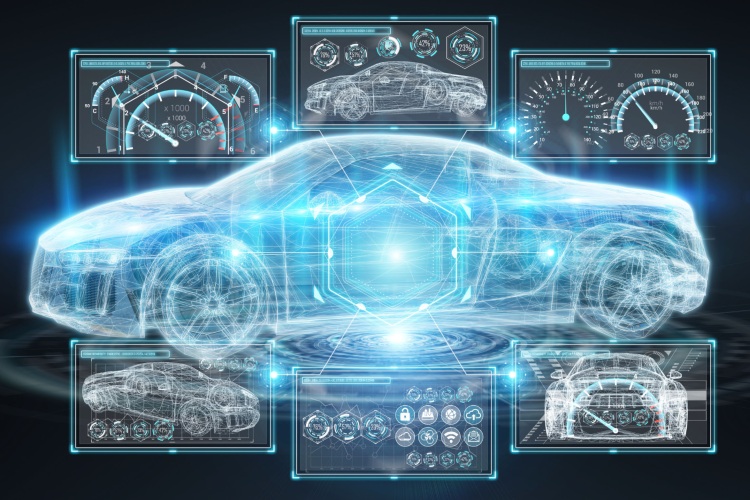 Digital driving experiences have become the norm thanks to the technology found in modern cars. (Photo: 123RF.com)

Over the last decade, we’ve seen the technology in modern cars advance exponentially. It’s gone beyond simple – but seemingly advanced at the time – improvements such as power windows and power steering, to cars now being equipped with numerous semi-autonomous functions that offer drivers digital driving experiences.

Carmakers are doing this with the aim of making vehicles safer, more connected and more convenient and drivers are certainly reaping the benefits.

Like regular drivers, motoring journalists have had to learn and adapt to these new systems. With carmakers – European, Japanese, Korean, American – investing in adding more technology to their cars, their development shows no signs of stopping.

Take for example the latest Volkswagen Touareg, which was launched in Singapore last year. Compared to the previous one, which came out in 2010, the newest iteration certainly has far more bells and whistles. 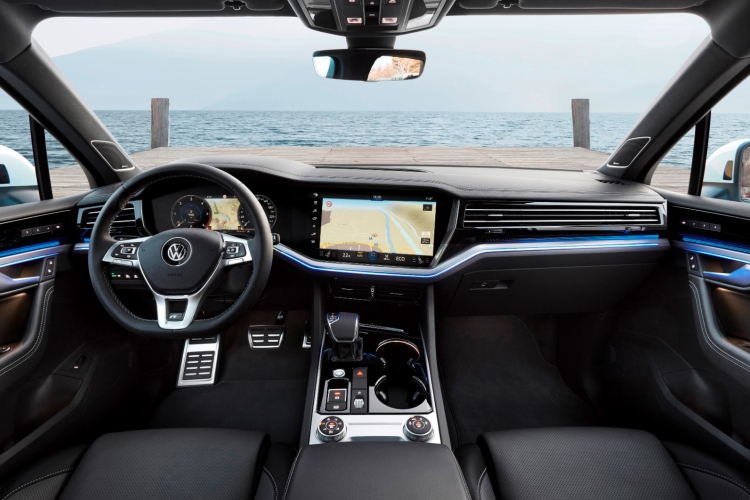 Large, high-resolution screens are becoming standard in many cars today.

Today’s infotainment systems incorporate navigation, music and communication functions into a central hub, allowing users to interact with the various functions via virtual controls on the screen. The alternative to this would be numerous sets of controls for the various features – a messy solution, to say the least.

The moment you open the door, the Touareg’s interior screams high tech. The dashboard is dominated by two screens, which are part of what VW calls the “Innovision Cockpit”.

A 12.3-inch digital screen takes the place of an analogue cluster, which gives drivers the flexibility to change the display’s layout. For instance, drivers can choose to have navigation info alongside the usual speedometer and rev counter. 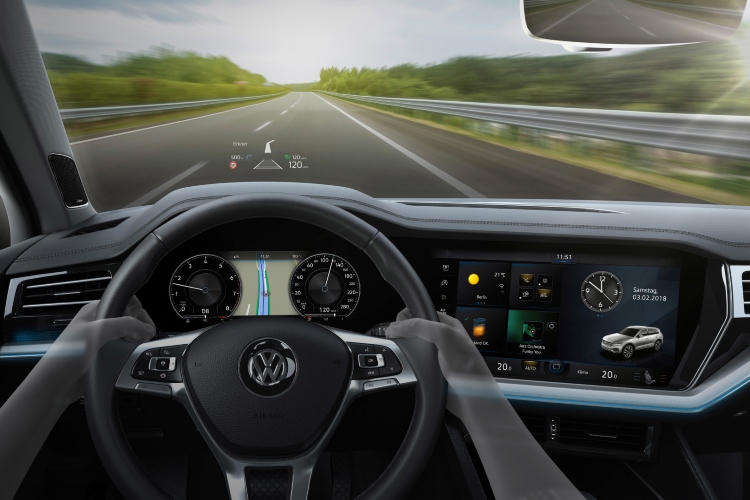 Beside the digital cluster is one of the largest infotainment displays available in Singapore: a 15-inch screen, which comes with the Discover Premium system.

Like today’s smartphones, systems like Discover Premium can adapt to users by allowing them to personalise the menus displayed.

Drivers who’ve always dreamt of being a fighter pilot when they were a kid will also get a kick out of the Innovision Cockpit’s heads-up display, which projects the most pertinent info on the windscreen. It not only looks cool – it also helps the driver stay focussed on the road.

VW’s Touareg is certainly not the only car with a digital dashboard. Audi has its virtual cockpit, BMW has Live Cockpit Professional, Mercedes has MBUX (Mercedes-Benz User Experience) – just to name a few. 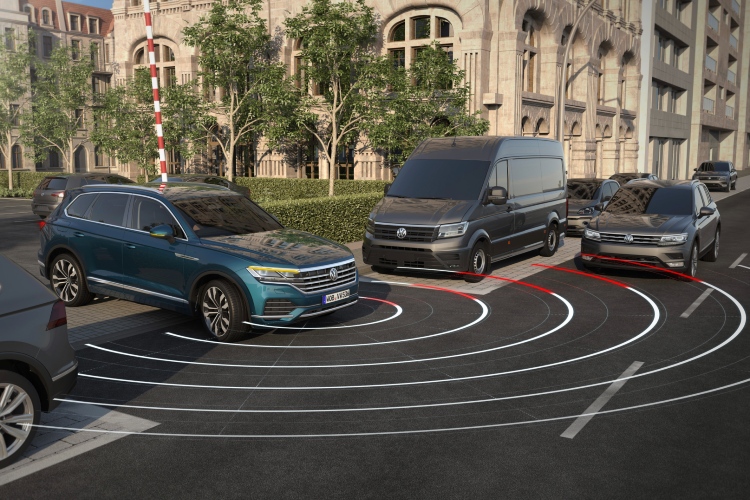 Front Cross Traffic Assist can detect approaching vehicles that the driver may not see. In this example, the parked van makes it hard for the SUV driver to see the approaching sedan.

Being a safe driver requires skill, experience and discipline. But even the most skilled and attentive driver cannot see through blind spots, or always react quickly enough to a vehicle that “comes out of nowhere”.

That’s why carmakers are equipping their vehicles with semi-autonomous driving functions that are able to fill in these gaps. In the Touareg, these functions include Front Cross Traffic assist and Front Assist with City Emergency Brake.

The former helps spot traffic crossing in front of the vehicle that the driver may not see – such as when stopped at a T-junction. The latter helps prevent accidents by monitoring the vehicles ahead at speeds of up to 65km/h. 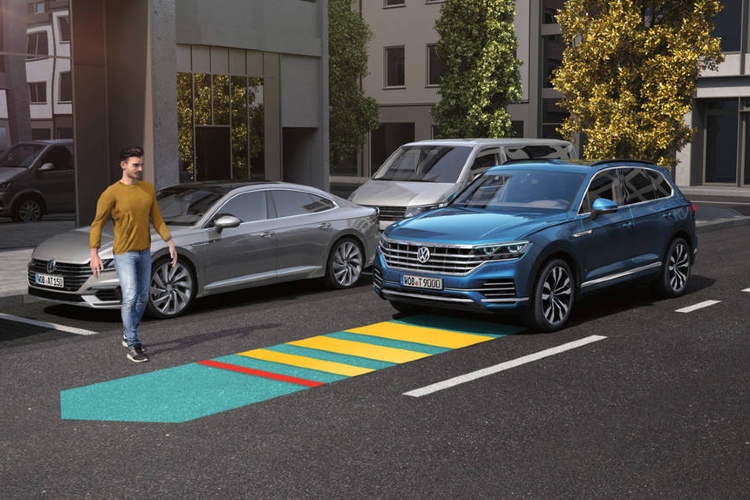 Autonomous emergency braking can save lives.

If a collision is imminent but the driver has not reacted, City Emergency Brake will apply the brakes to reduce the impact. Remember, at 60km/h, reacting even a second later could be the difference between a minor accident and a serious one.

The Touareg also has Side Assist with Rear Traffic Alert, which aids drivers in safely changing lanes by detecting other cars in the vehicle’s blind spot.

When reversing, Rear Traffic Alert warns drivers of approaching vehicles that he or she may not be able to see. It’s not exactly like having eyes at the back of your head, but it helps. 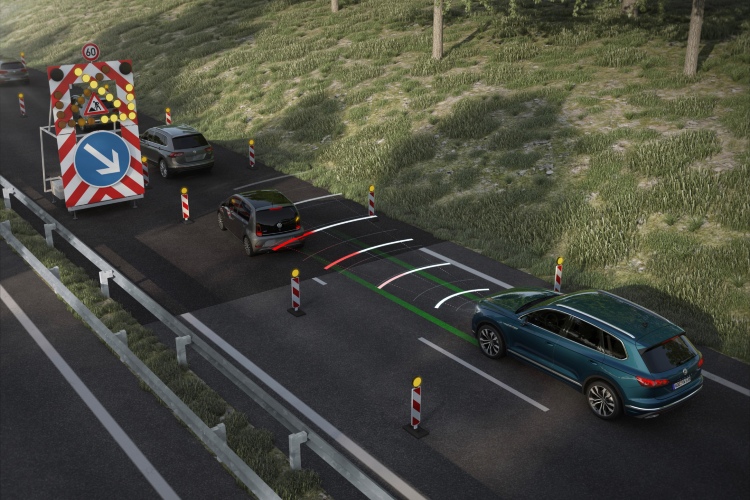 The circuit-breaker has gifted motorists with empty roads. But when things do return to normal, congestion will return with a vengeance.

When activated, it takes over the Touareg’s accelerating, braking and steering functions, reducing the stress on the driver. On longer drives, functions like Lane Assist with Lane Keeping System keep the car in the middle of the lane. It can also intervene via steering inputs.

Many of us grumble about how cars are becoming more gadget-like. But as the saying goes, this is the price of progress.

To put it simply, there’s no turning back now. Think of it this way. Now that TVs are available in 4K and 8K resolution, nobody wants a CRT (cathode ray tube) TV anymore. And given our reliance on smartphones, few would toss them aside in favour of analogue ones.

Whether it’s phones or cars, the important thing to note is that technology and advanced features are only there to help. We cannot rely on them completely. At least not yet.

And while the driving experience is now increasingly more digital, this doesn’t have to take away from your enjoyment; it just makes it a safer and more convenient one.

Car safety: 5 features to look for in a new car
Volkswagen and Siemens make crossroads safer with Car2X technology