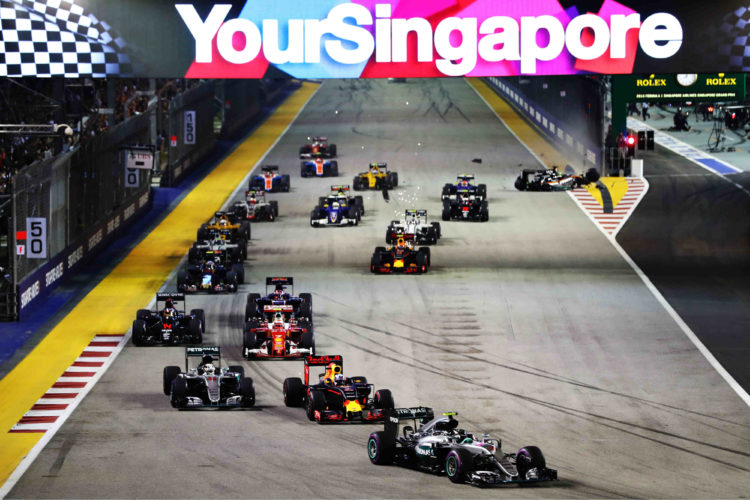 For hotels, news that the Formula One Singapore Grand Prix has been extended another four years meant more race weekend sell-outs.

But for the other businesses, including those in the food and beverage sector, it meant more years of dealing with road blocks and regular clientele staying away.

This has led experts to urge such businesses to do more to capitalise on the glitzy event, which has seen hotels enjoying brisk business during race weekends since 2008.

The Fullerton Hotel is fully booked this weekend, thanks to its location at the hairpin turn of the race, “which affords guests an exhilarating view”, said general manager Cavaliere Giovanni Viterale.

Its sister hotel, The Fullerton Bay Hotel, is also fully booked due to its proximity to the race circuit.

Mr Viterale said the extension was welcome news, as the race, concerts and after-race parties have “made Singapore a sought-after destination to visit each September – be it for race enthusiasts or party-goers wishing to soak in the vibrant atmosphere in the heart of the city”.

The track-side Pan Pacific Singapore is more than 95 per cent full this weekend, said general manager Gino Tan. “The F1 race is one of the major events and revenue contributors for the year, and we look forward to hosting the race teams and race enthusiasts in the coming years,” he said, adding that as part of the festivities, staff dress up in themed uniforms and decorations are put up in the lobby.

Even hotels out of the circuit enjoy a spillover effect. Royal Plaza on Scotts, for instance, is 95 percent full this weekend. Its general manager Patrick Fiat said the extension would boost tourism, and that the impact of the race “extends beyond the race dates as it places Singapore’s name at the top of mind for both business and leisure travellers”.

But retailers and food and beverage operators appeared to be neutral about the extension, with some finding it hard to trade the rise in footfall with the inconveniences that come with organising a large-scale race.

Florist Wadia Lau said So Blossom in CityLink Mall suffers a 15 percent to 20 percent drop in profit during F1 weekends. “We can’t do deliveries because of the road blocks, so we have to get another branch to do so. Some suppliers also find it difficult to come over, so they don’t at all,” she said. “I hope the authorities consider opening up some small roads so that businesses experience fewer disruptions.”

At Mad for Garlic, a restaurant in out-of-the-loop Suntec City, business plunges by about 35 percent every F1 weekend. “We will just go on as per normal – we already have a 40 percent discount for the month of September to encourage more people to come in,” said assistant manager Nana, who goes by one name.

Marketing and retail lecturer Amos Tan said retailers must evolve to tap the F1 crowd. “We have to ask ourselves if we are competitive in terms of pricing compared to retailers in other cities, and whether we are offering a unique shopping experience,” he said. “Right now, we have cookie-cutter malls, where customer service isn’t the best.”

F1 fans delighted in news of the extension. British mechanical engineer Franco Melina, 55, who is attending his fourth F1 race here this year, said he was “super chuffed” about the extension. “It can’t go wrong, it is the only night race. I had been hoping for this news.”