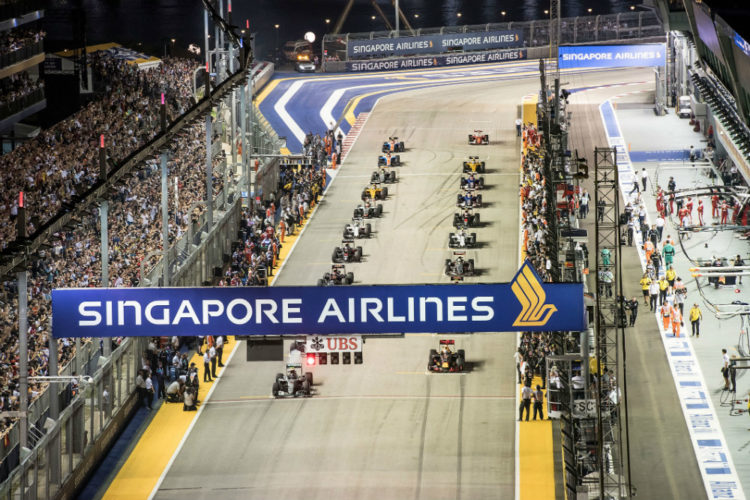 It was announced that Singapore will continue to host the Formula One Grand Prix for four years after the current contract ends this year.

Amid the negotiations over a renewal, some have cast attention on the weak attendance last year. The three-day event in 2016 saw the lowest ticket sales to date, with an average of 73,000 spectators a day – down 15 percent from the inaugural year.

However, we should be careful not to overstate the significance of last year’s poor attendance. Prior to 2016, spectator numbers in the three years before – from 2013 to 2015 – were the highest in the Singapore Grand Prix’s history since 2008.

Since the first night race was held here in 2008 till 2015, it has attracted some 350,000 international visitors, representing 40 percent of all spectators. These visitors have brought in about $150 million in tourist dollars each year, with the exception being 2009 due to the global financial crisis.

Being an F1 host has other benefits.

First, the Singapore Grand Prix has a direct spillover effect for a wide range of industries – from tourism-related sectors such as food and beverage, hospitality and retail to auxiliary services such as logistics and event management.

The night race brings more consumers to the event area and creates demand for services. Small and medium-sized enterprises are sub-contractors for about 90 percent of the race organisation works each year, from circuit set-up to ticketing and security services.

Second, the annual nature of the event enables firms to learn through experience and to innovate. For instance, over several years of supplying catering equipment to the event, kitchen solutions firm Steward’s Solution has come up with new temporary dining structures and reconfigured container kitchens, providing fresh dining concepts for race patrons each year.

Service companies have also grown better at collaborating with each other. Players in the entertainment industry have had a chance to test-bed new concepts.

The improvement is also clear from the perspective of the general public. From 12 days of road closure for the first race in 2008, the process has now been halved to just six days. If Singapore continues to host the F1, service providers will be able to continue reinventing and refining their processes to be more efficient and effective.

Third, the Singapore Grand Prix has a strong brand effect for the country, reinforcing Singapore’s presence and reputation on the world stage. Anecdotally, when businessmen in China hear that their interlocutor is from Singapore, a common first reaction is: “Oh, you have that F1 race!”

Fourth, the Singapore Grand Prix is not just for sports fans. Its wide appeal is on two levels, namely the accessibility of F1 racing as a sport and the multifaceted nature of the event itself.

Tennis or golf tournaments, for example, appeal more to enthusiasts who are interested in the sport itself. However, the F1 race is a spectator sport for all, regardless of whether they know the teams, drivers or even the rules.

In Singapore, there have also been numerous community events organised throughout the year to engage the public and youth, including school visits and behind-the-scenes tours. The Grand Prix is a three-day mega event with festivities ranging from concerts featuring international artists to Michelin-starred feasts.

Fifth, the Singapore Grand Prix party provides a perfect opportunity for firms, such as banks, to invite and host their top clients. These networking gatherings could lead to business deals being generated or closed.

Singapore needs to keep its line-up of events fresh to attract different groups of people. For example, the United States already boasts a drone racing league. Drone racing in sports stadiums here could appeal to spectators, local and foreign alike.

An active and busy event calendar throughout the year would not only help Singapore to attract tourists but also reduces the impact of seasonality on businesses, such as hotels’ occupancy and room rates.

With the F1 contract now renewed, the Republic will continue to benefit from the undeniable advantages of hosting such mega events.

Francis Tan is an economist at UOB, James Walton is the sports business group leader at Deloitte Singapore & South-east Asia.