The year was 1989 when Mazda introduced its epoch-making MX-5, codenamed NA and also known as the Miata or Roadster. It was the emphatic return of the straightforward rear-drive roadster. It was a retrospective soft-top without the retrogressive squeaks and leaks. It was the Hiroshima automaker’s finest hour.

The car is simple and nimble. It’s light on its feet and light on your pocket. It has an androgynous sex appeal. It’s a classic British roadster reborn as a Japanese runabout, complete with ’60s touches in the form of charming Lotus Elan-style cam covers and Minilite-inspired alloy rims. The original MX-5 (red car in photo above) spells fun with a capital F.

The second-generation model, NB (silver car in photo above), was launched in 1998. It’s as delightful as ever to drive, but it’s a bit bigger, a little quieter and slightly quicker. Its rear window was also changed from cheap plastic to solid glass. Less welcomed by enthusiasts are the generic fixed headlights (in place of pretty pop-ups) and the ordinary door handles (in place of dainty chrome openers).

The third-generation MX-5, NC (blue car in photo above), is no longer a back-to-basics number expressly designed for yesterday-once-more motoring. The size and shape are still familiar, but the windswept Mazda has well and truly grown up into a modern driving machine.

Quite unceremoniously, the old-school rawness of its predecessors has been replaced by new-age refinement. At the same time, the car’s interior space, practicality and equipment have been improved dramatically. The goodies include automatic multi-mode air-con, a Bose hi-fi system and, at long last, a steering wheel that adjusts for height. There is even a retractable hard-top version of the MX-5 for those who think that the foolproof fabric roof isn’t neat or tight enough. 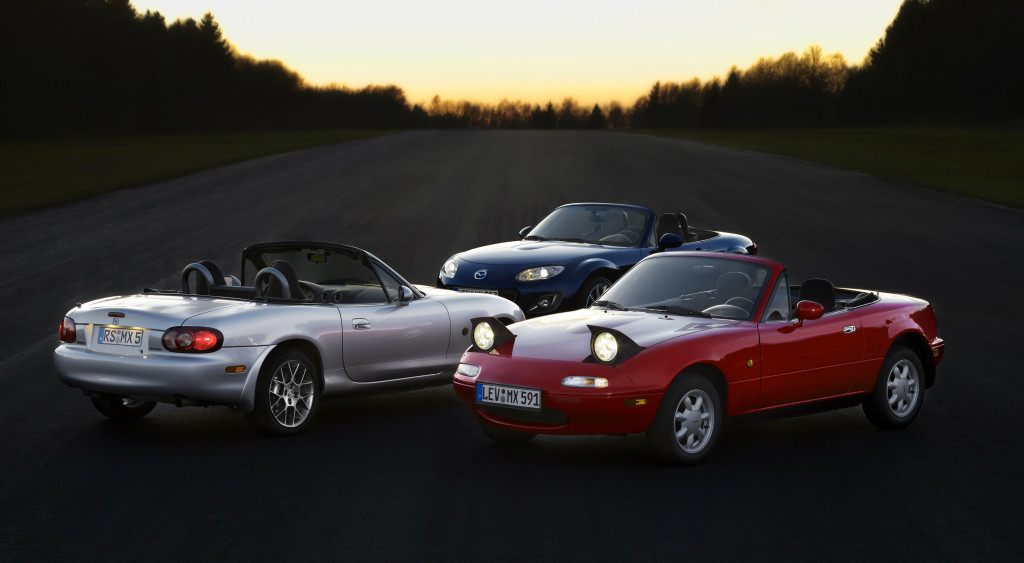