How and when did you first get involved in motor racing?
When I first saw car racing at the Red Bull Ring at Speilberg in 2013, I started to look at these things – how it works and how I can test myself in this motorsport world. Weeks later when I came home from a race weekend, I started to check on-board videos about racing.

In November 2013, I got a chance to sit behind a racecar’s steering wheel to get a bit of the feeling of this world. On that day, I felt that I am able to improve myself all the time to the top, and after that, I went for many tests. After all this, the promoter of the series told me that I am able to race in that series and let’s do it. On my first race weekend, I already reached the podium with finishing 2nd overall.

Have you always loved fast cars and racing as a child/teenager?
Well, when I was 3, I already got a small electronic Jeep from my parents to drive it at home in our garden, and of course, my parents are also in love with cars.

Most racing drivers begin their racing careers with karting, but you went straight into motor racing. How do you feel about this?
Actually, before I got into a racecar for the first time, I have never driven a go-kart. That is just simply not my world and I still do not like it.

What do you consider your biggest accomplishment in your racing career so far?
Well, as anybody else, I also got some ups and downs, but the biggest thing for me so far is to be a member of Audi Sport racing academy and to know that the experts at Audi think that I’m worthy to be there. It’s really great knowing that they discovered me when I was 14, and hired me into the academy at the age of 15.

How has the Audi Sport racing academy supported you as a young racing driver?
The Audi Sport racing academy is not just about driving. Of course, we are testing a lot with several type of racecars, but that is just one thing. We learn about everything we have to know about motorsport, for example, the setups of the car, how the is affected if we change something, what is the reason for this and so on.

What is your strategy when you pit your Audi TT Cup racecar against bigger and more powerful machines?
My strategy is to drive the car on the limit and give the best performance all the time. For me, it doesn’t matter if my competitor has a stronger car, my goal is to win.

Due to your age, you are currently only competing in national races in Hungary. What goals have you set for yourself when you are old enough to participate in international races?
From next year, finally, I am allowed to race in any series and my next goal is to compete in the Audi Sport TT Cup in 2017. After that, I would like to continue in the GT world, but my final goal is to reach the DTM or WEC.

Where do you see yourself in 10 years’ time?
I think I am able to reach my goals because I fully concentrate on the motorsport. As for where I see myself in 10 years’ time… It is hard to tell. We will see. It depends on many things – the factory, the team, the sponsors.

How does it feel to be the youngest female racing driver in the world?
I don’t care about my age. I always want to be the best and do everything to be the first.

Is it an advantage or disadvantage as a girl in the male-dominated field of motor racing?
Neither of them. But I don’t want the other drivers to look at me as a young girl. It’s better if they think that I’m an opponent, same as the others. This was the case in my racing career so far and I have no problem with this.

Do you feel like you have something to prove because of your age and gender?
Everyone is learning all the time, it doesn’t matter how old they are. I think I have got a very strong and brave personality, which is important in this sport, especially when you have to handle the pressure during the races. For me, the best is when I am in a very big field with really strong competitors, because later I can say that I was at the front in that big and strong field, I did a great job and it was not easy.

Do you attribute being a good racing driver to natural talent or practice plus training, or a bit of both?
Of course, you need talent to be one of the best drivers in car racing, but you have to practise and train even if you reached a certain level. So I think it’s a question of talent, hard work and practice.

How do your parents, family and friends feel about you racing?
At the beginning, my parents were a little bit afraid of my racing, but then, they also saw that I have the talent and the courage, so they are now my biggest supporters. I think my friends like what I do, so they feel absolutely positive about this.

Does it feel odd being able to racecars on a track but not being legally allowed to drive a car on public roads?
Racing and public driving are separate things, so now I don’t care about public driving because I can’t do it due to my age. But this doesn’t feel odd to me, because my racing career isn’t related to driving on public roads – these are two separate things. Maybe it will be quicker and easier for me to get the driver licence!

What is the first car that you would like to drive when you are old enough to get a driving licence?
Fortunately, I had the chance to drive many kind of cars during shows, exhibition drives or driving experience programmes, but those drives were on racetracks. For public driving, I’ll probably pick a comfortable car because I travel a lot and the distances are big, so I think it would be the Audi SQ7.

What are your hobbies and interests besides motor racing?
I like horse riding. 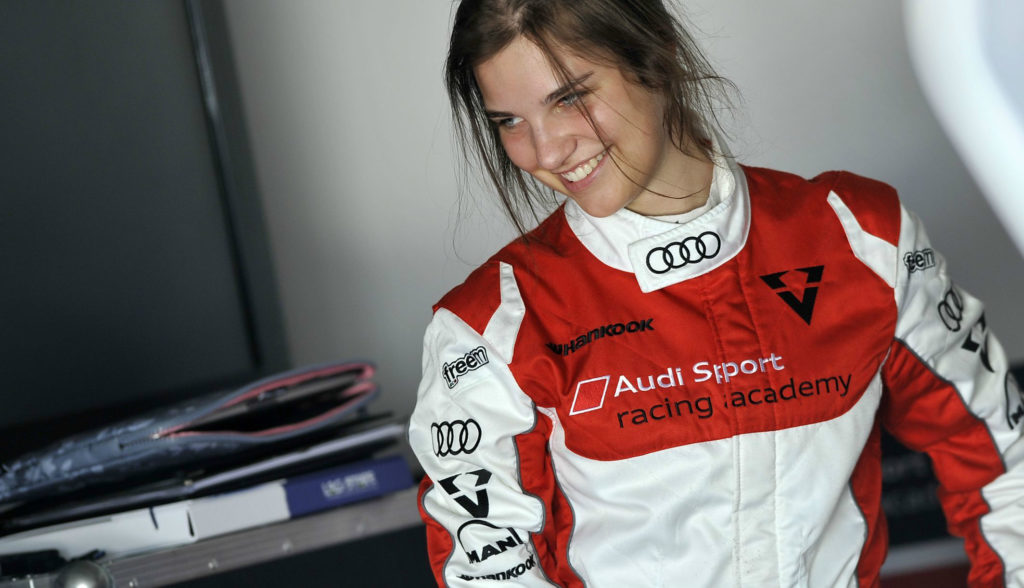 Read our review of the Audi TT.