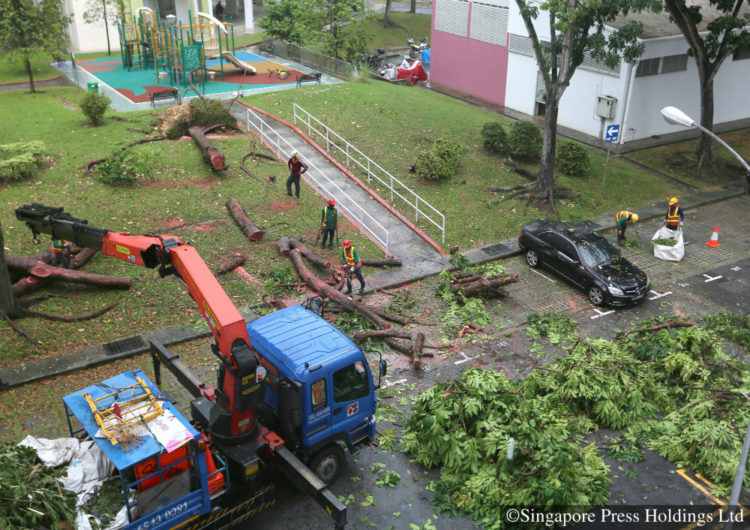 The 18m-tall tree fell due to a heavy downpour and sudden gusts of wind.

A heavy downpour on Wednesday (July 5) afternoon caused an 18m-tall tree to fall on a car in Tampines, briefly trapping its driver.

The tree, a khaya senegalensis that is commonly planted along roads, fell on the Mercedes-Benz at Block 124, Tampines Street 11, at around 3.20pm.

The car’s owner, a 34-year-old man who gave his name only as Mr Tan, told The New Paper he was there to pick up his 10-month-old son from his parents’ home.

It was raining heavily at the time, and Mr Tan said he saw his mother carrying his son towards the sheltered walkway.

He was about to get out from the car when the tree fell, but he remained in it as he was unsure if doing so would cause more damage.

Mr Tan was uninjured, although the tree shattered the windscreen of his seven-year-old car and damaged its side mirrors. The right passenger door was also dented.

A Singapore Civil Defence Force (SCDF) spokesman said it dispatched a fire engine, a Red Rhino, an ambulance and a support vehicle to the scene.

Contractors used a crane to help lift the tree off the car before SCDF personnel helped Mr Tan out of the car. 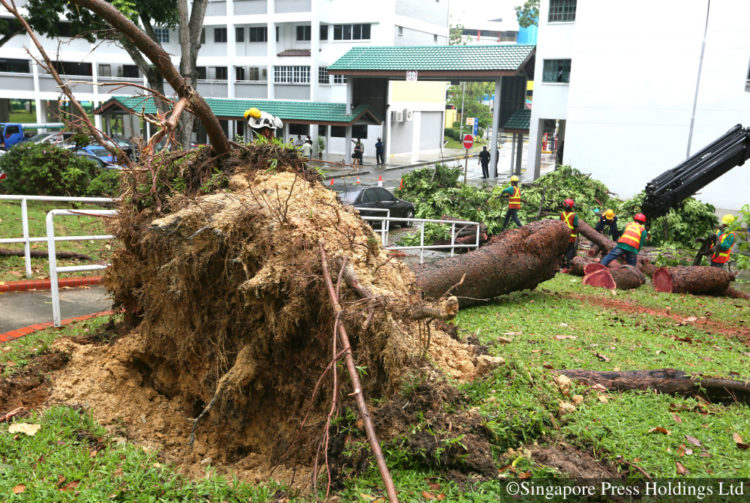 “My mother was waiting for me with my son at the void deck. She was relieved to see me after I got out of the car,” said Mr Tan.

During his wait inside the car, he said a lot of red ants entered the car through the shattered windscreen.

When contacted, a Tampines Town Council spokesman said it had apologised to Mr Tan for the incident and asked him to contact the town council regarding claims.

He said an arborist concluded that the tree fell due to the downpour and sudden gusts of wind.

“It was checked in March this year, and ascertained to be in good health. We verified this after checking the tree yesterday (Wednesday). It was also pruned in April this year,” he said.

“As a precautionary measure, our horticultural team will inspect all the trees in the vicinity.”

The khaya senegalensis tree which fell was a normal-sized one, the spokesman added.

Also known as the Senegal Mahogany, the West African species is commonly planted in Singapore due to its rapid growth – it can grow up to 28m in height – and ease of transplanting.

Related story: How do you figure out whether to drive through a flash flood or not?
Related story: More motor accidents, but insurance claims down