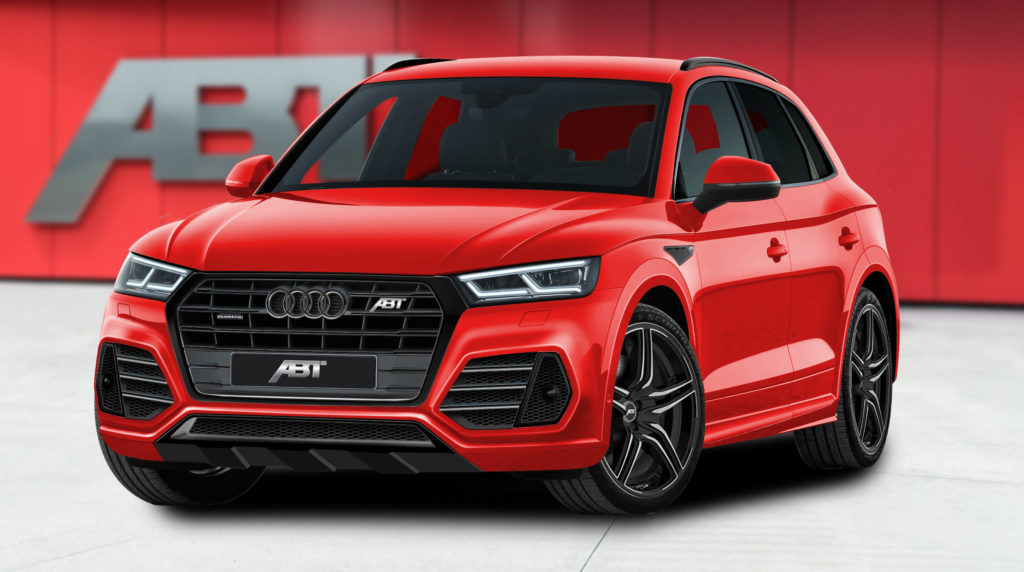 The ABT Sportsline development centre is located between Kaufbeurer Straße and Johann-Abt-Straße in Kempten (Germany). The last stage of the design work for the new SQ5 Aerokit is currently in process in this institution.

This is also where the top-of-the-line model recently received a 20 percent power boost to 425bhp and that should definitely be visible as well. After all, the standard model “only” has 354bhp. The maximum torque is increased by the installed ABT Engine Control (AEC) unit from 500Nm to 550Nm.

The basic variant of the new ABT Aerokit for the latest SQ5 includes a front skirt with an aggressive design, door strip attachments and a distinctive rear skirt set, which also comprises a resonant rear muffler for the 3-litre turbo petrol V6. With its black chrome-plated tailpipes, it impresses acoustically and visually.

For all those who still find that too discreet, the German company has another ace up its sleeve: the ABT Widebody Aerokit. Attractive fender extensions are also included as well as additional extras. Optionally, SQ5 owners can order ABT Fender Inserts with air slots as well as an ABT Rear Wing with a particularly beautiful design.

But the ensemble is not complete without a set of matching ABT alloy wheels which are available in different designs, sizes and finishes. The widebody version even makes it possible to mount 22-inch sport rims on the SQ5, to create an even clearer distinction from the standard models. These are available in the GR, DR and FR designs with TÜV certificate.

If 22-inch is a bit too much, owners can choose the 21-inch ABT DR and the 20-inch ER-C, each in gunmetal. Other options include the 21-inch FR in mystic black or the 20-inch GR, which can be ordered in matt black or glossy black. The attractive wheels stand out even more in combination with the new ABT suspension components.

As a special extra, the optional ABT Integrated Entrance Light projects the ABT logo onto the floor when the door is opened, providing a special eyecatcher.

Read our review of the new Audi SQ5.

Check out the out ABT SQ5.