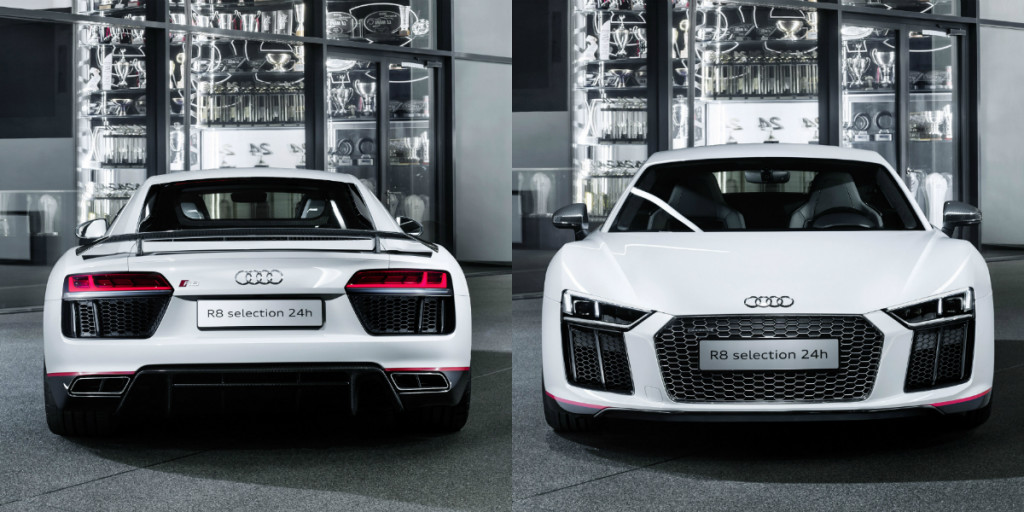 One year ago, the Audi R8 LMS won the 24 Hours Nurburgring on its debut. The GT3 racecar’s victory marked the start of a successful year of motor racing for Audi Sport. The brand now celebrates the R8 LMS with the “selection 24h” special edition, a homage to its tally of 323 wins in national and international race assignments since 2009.

The “selection 24h”, being built in a limited production run of 24, is based on the Audi R8 Coupé V10 Plus. Its 5.2-litre V10 mid-engine develops 610bhp and accelerates the top model of the R8 range from zero to 100km/h in a mere 3.2 seconds, before advancing to a top speed of 330 km/h. That makes the Audi R8 Coupé V10 Plus both the fastest and most powerful production Audi of all time.

A newly developed quattro drivetrain distributes its power fully variably between both sets of wheels. The suspension, the aerodynamics configured to handle high downforces, and the operating concept featuring the Audi virtual cockpit are all motorsport-inspired.

That is because Audi developed the second generation of the R8 in parallel with the GT3 racing model R8 LMS. Close cooperation between racecar engineers, motorsport specialists and developers has brought both models a significant boost in performance.

The dry weight of the Audi R8 Coupé V10 Plus is 1454kg, while its body, built using the multi-material construction principle, weighs a mere 200kg. The combination of aluminum and carbon fibre-reinforced polymers (CFRP) in the Audi Space Frame opens up entirely new dimensions with regard to weight, rigidity and crash behaviour.

The front spoiler, exterior mirror housings, engine compartment cover, rear wing and the diffuser are made from gloss-finish carbon fibre. The same applies to the sideblades with matt-finish “R8 24h” logo. The tailpipes of the sport exhaust system feature black trims and the 20-inch forged aluminum wheels in 10-spoke Y design are painted gloss anthracite black.

Inside, the limited-edition model offers full leather upholstery and trim in the colour Rotor Gray, with Alcantara headlining. The air vents and the extended inlays for the surround of the Audi virtual cockpit are made of gloss-finish CFRP. The latter also bear the matt-finish “R8 24h” logo. The illuminated door sill trims are also made of gloss-finish carbon. They display the serial numbers 1 to 24 for each of the limited-edition cars.

As an exclusive feature of the limited edition, the entry lights on the doors project the Audi R8 logo onto the road surface. In future, every R8 customer will be able to personalise his car with a near-unlimited range of lettering and logos from the Audi exclusive offering.

The “selection 24h” special edition of the Audi R8 Coupé V10 Plus is a homage to Audi’s remarkable achievements in endurance racing.

In the Le Mans 24 Hours alone, the brand with the four rings has celebrated 13 overall wins in the past 15 years. The first five of these were clinched by the R8 sports prototype, which gave its name to the production sports model. The GT3 racecar R8 LMS made its competition debut in 2009. It has since collected over 300 wins worldwide, including overall victories in 24-hour races on the Nurburgring, at Spa-Francorchamps and Zolder, and in Dubai. It also has a class victory in Daytona to its name.

Last year, the new generation of the Audi R8 LMS made a dream debut and won its first 24-hour race on the Nürburgring at the very first attempt. 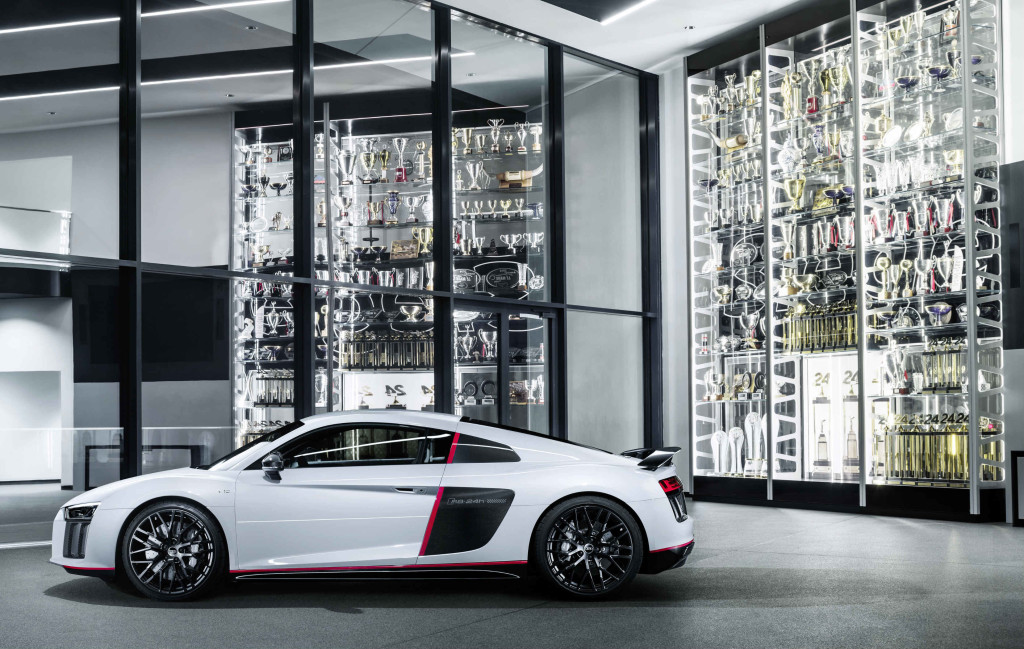 Read about the second-generation V10-powered R8.

Read about the first-generation V10-powered R8.