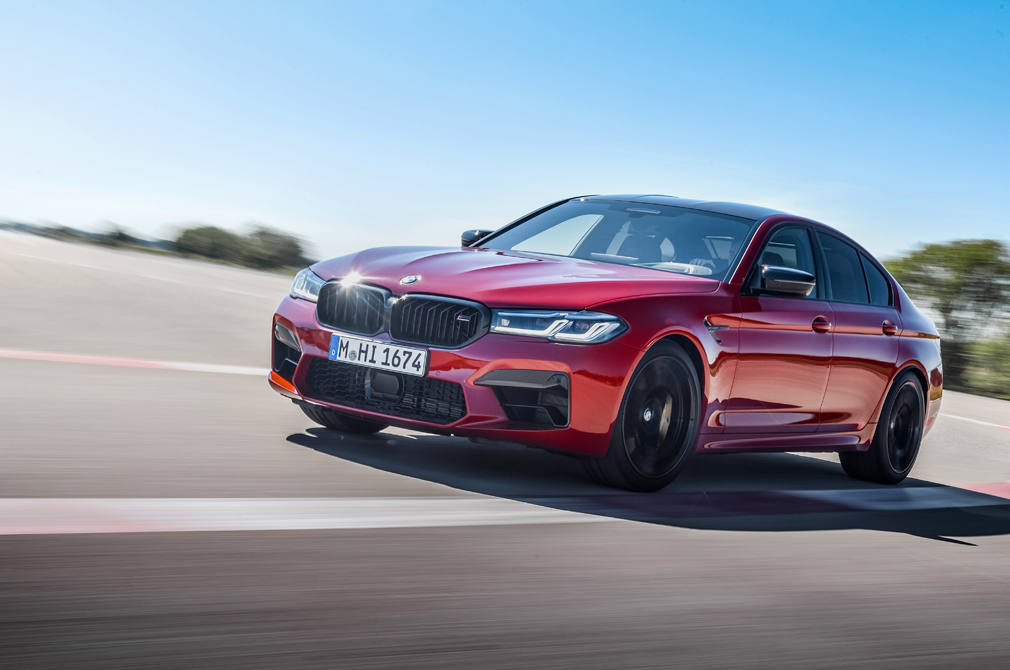 BMW has unveiled its high-performance versions of the recently facelifted 5 Series: The M5 and M5 Competition. Both cars will complete the century sprint in under 3.5 seconds.

These figures enable the BMW M5 and M5 Competition to rocket from rest to 100km/h in 3.4 seconds and 3.3 seconds respectively. Both models are equipped with the 8-speed M Steptronic transmission and BMW’s xDrive (all-wheel-drive) system.

Optimisations to the engine turbochargers and fuel injectors have yielded faster response times and more efficient mixture preperation. An added oil pan with a small front sump and an indirect charge air cooling system have also been added to the engine. 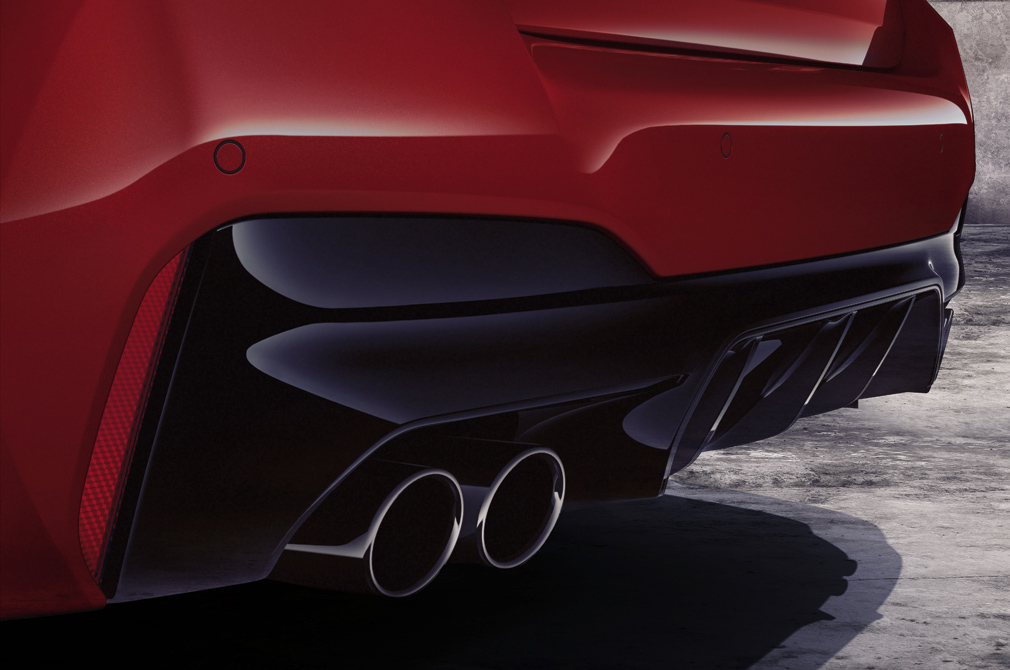 At the other end of the engine sits a flap-controlled dual-branch exhaust system. This allows the V8’s soundtrack to be varied via the different engine modes.

Exclusive to the BMW M5 Competition are bespoke engine mounts, which BMW claims will allow the car to corner with noticeably greater directness and precision.

In addition, the BMW M5 Competition also rides 7mm lower to the ground than the BMW M5.

Increased camber at the front axle enhances the M5 Competition’s ability to absorb lateral forces through high-speed corners. The springs are also 10% stiffer. 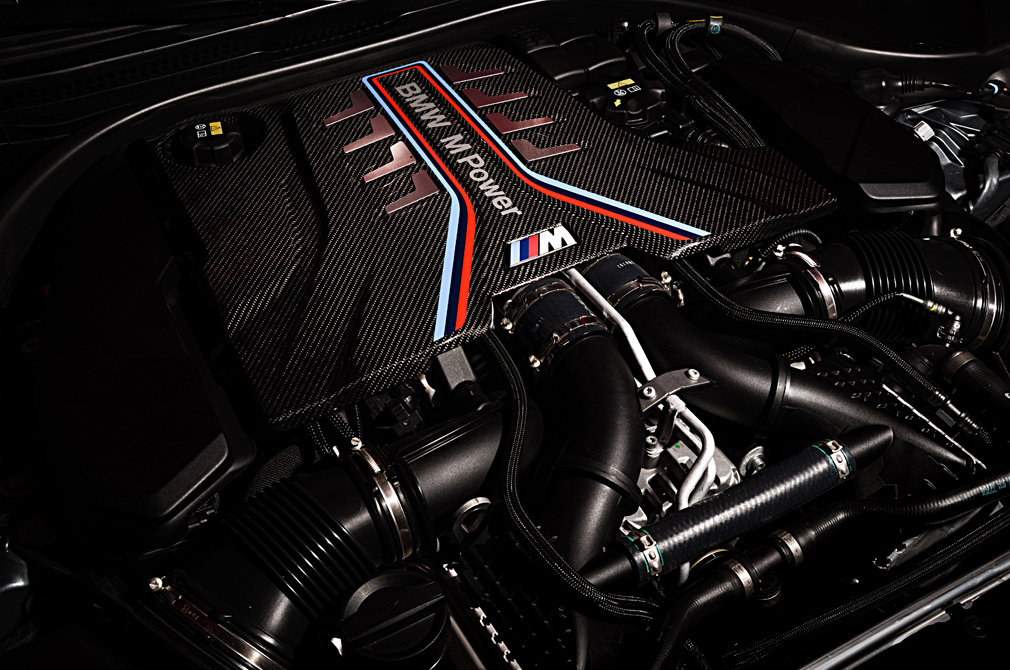 The fitment of toe links with ball joints instead of rubber mounts has also resulted in even more precise wheel guidance at the rear axle.

And the rear anti-roll bar also has a firmer spring rate, causing the body roll that occurs through high-speed corners to be distributed with a pronounced rear bias.

Both cars are fitted with BMW’s M Compound brakes. Lightened to reduce unsprung mass, the front discs are perforated and inner-vented, held by six-piston fixed calipers.

Meanwhile, the rear brake pads are each held by a single-piston floating-calliper. The callipers are also now available in High-gloss Black or High-gloss Red as an option.

Outside, the updated BMW kidney grille featured on the BMW 5 Series has a more upright appearance and drops down further into the front apron on the M Series cars. L-shape light tubes within the headlights narrow towards the kidney grille.

L-shaped light tubes in the headlights point towards the kidney grille for an added dynamic flourish and more aggressive scowl. The rear apron of the M5 with its large diffuser and the LED tail-lights have been restyled.

Those looking to identify the Competition model should look out for the BMW kidney grille surround, the mesh on the M gills, the exterior mirror caps and the additional rear spoiler, which are all finished in High-gloss Black. 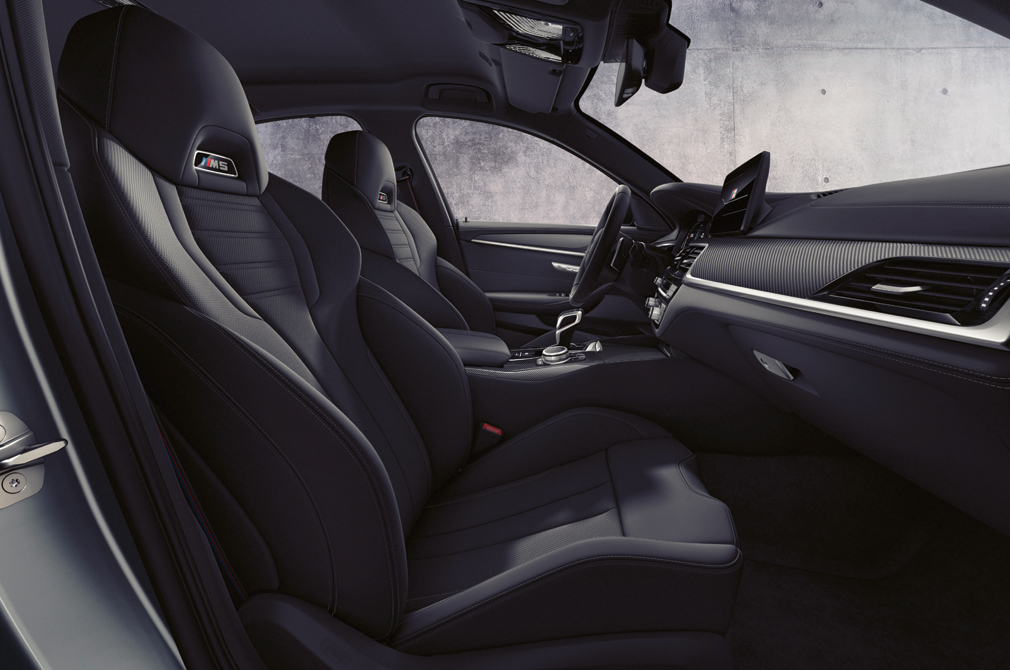 Brands Hatch Grey and Motegi Red metallic have been added as new paint colour options for the BMW M5 models.

Inside, the BMW M5 models get the upgraded 12.3-inch central display. Two new buttons on the centre console – like those found in the BMW M8 – provide more direct access to system settings. BMW M sports seats come as standard, while the M multifunction seats can be optioned.

M Sport seats upholstered in Merino leather come as standard for both driver and passenger in both cars, while the M multi-function seats with integrated head restraints, and an illuminated M5 logo are optionally available.

Merino full leather trim in Black/Midrand Beige is offered exclusively for the BMW M5 Competition. A premium Harman/Kardon sound system is standard in both cars.

Do also read our reviews of the close rivals of the BMW M5, the Mercedes-Benz E63 S and the Audi RS6!