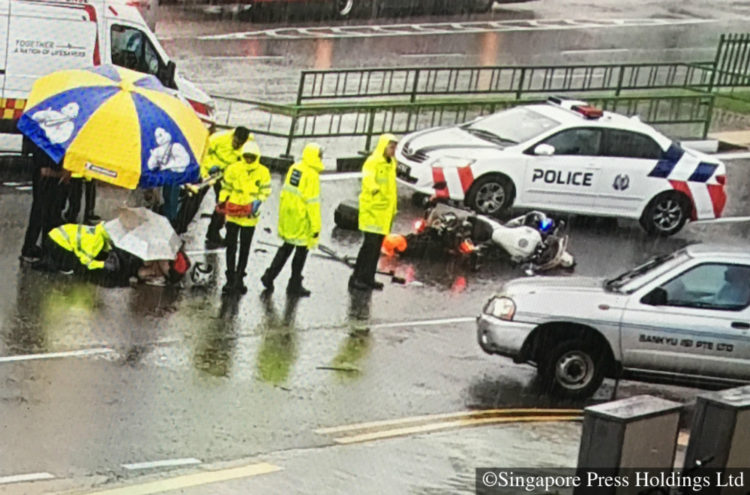 The accident happened at about 5pm at the traffic junction of Sembawang Road and Jalan Jeruju when the car, which was making a right turn from Sembawang Road into Canberra Road, crashed into the fire bike that was travelling straight along Sembawang Road towards Upper Thomson Road.

The Straits Times understands that the 28-year-old officer was discharged from Khoo Teck Puat Hospital on Tuesday afternoon, after receiving care for a right knee injury.

A police spokesman said the police were alerted to the accident at 5.06pm, and that the male officer was conscious when taken to the hospital. He added that police investigations are ongoing.

Eyewitness Liang Hock Heng, who was in his van behind the fire bike before the accident, said the driver did not stop immediately upon impact, but continued to drive his vehicle over the collapsed fire bike before finally stopping.

He also added that it started to rain after the accident, and that he saw a woman shielding the officer from the rain with an umbrella, when he made a U-turn later to check on the SCDF officer.