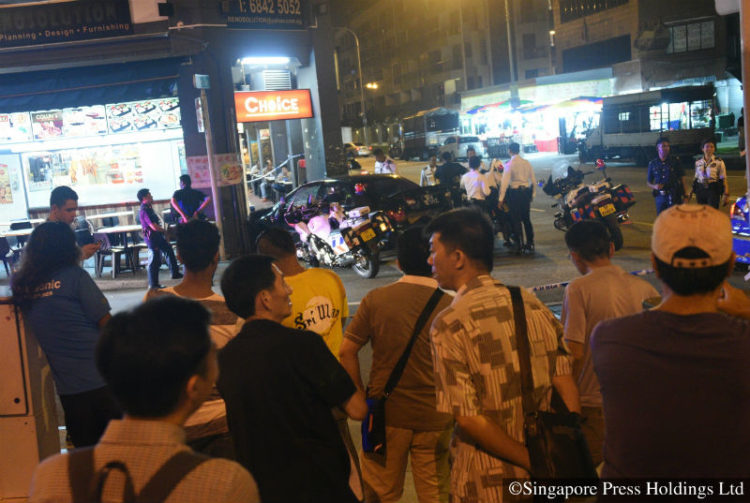 His usual spot was at a table placed in front of a pillar at a corner coffee shop in Geylang Lorong 25A.

That table was a ringside spot to happenings along Sims Avenue and coffeeshop cleaner Tan Ah Chen, 75, would often gather with his friends or have a shut-eye there before resuming his work of clearing dirty dishes for the night.

But around 1am yesterday, “something nagged me to move away from there”, he told The New Paper.

And within minutes of Mr Tan moving off, a black sedan crashed into the pillar, smashing the very table he was at.

“If I hadn’t heeded that uneasy feeling, I wouldn’t be here talking to you,” Mr Tan told The New Paper.

The car, driven by a 22-year-old man, had led the police on a high-speed chase around Singapore just after 1am yesterday, after speeding through a police roadblock at Henderson Road. The driver was later arrested .

Mr Tan said he was at his usual spot catching a few winks when he was woken up by the screeching sound of tyres and sirens.

“The man had raced around the area three times, driving extremely fast and the police were close behind him,” he said.

A chicken rice stall helper, who declined to be named, said the chase sounded like they were on an action movie set.

“Police chasing, sirens on and screeching of tyres when suddenly bang. By the time we went out there, the car had hit the pillar and come to a stop,” he said.

Mr Tan said excitedly in a mix of Mandarin and Teochew: “I saw it all. Before the car hit the table and the pillar, the driver had already opened the door and jumped out.

“He tried to run away but it looked like he was hurt. Before long, the police arrested him.”

FIVE POLICE VEHICLES
The 13km high-speed chase, which started at the Henderson Road roadblock, took the suspect and five police vehicles along the Pan Island Expressway and into the Geylang area.

The fleeing sedan came to a stop only when it crashed into the coffee shop at Geylang Lorong 25A.

In response to media queries, the police confirmed that a roadblock was set up at Henderson Road yesterday and that a 22-year-old driver “refused to comply with the officer’s instructions at the roadblock and sped off”.

Its spokesman said that in his attempt to flee, he caused several collisions along Geylang Lorong 11, 16 and 25A.

The suspect and a passenger in the van were injured, and taken to Tan Tock Seng Hospital.

The suspect was arrested for evading a roadblock and other traffic- and drug-related offences. The police are still investigating.

The police also advised the public to cooperate whenever there is a roadblock and said that evading one can “potentially cause serious harm to the police and other road users”.

Any person convicted of evading a roadblock faces a fine of up to $5000 and up to 12 months’ jail.

The penalties were increased in June last year, when there were changes to the Police Force Act. Previously, the maximum penalty was a fine of $1000 and six months’ jail.