Driver killed in crash "had not slept for at least 24 hours" | Torque
Loading posts... 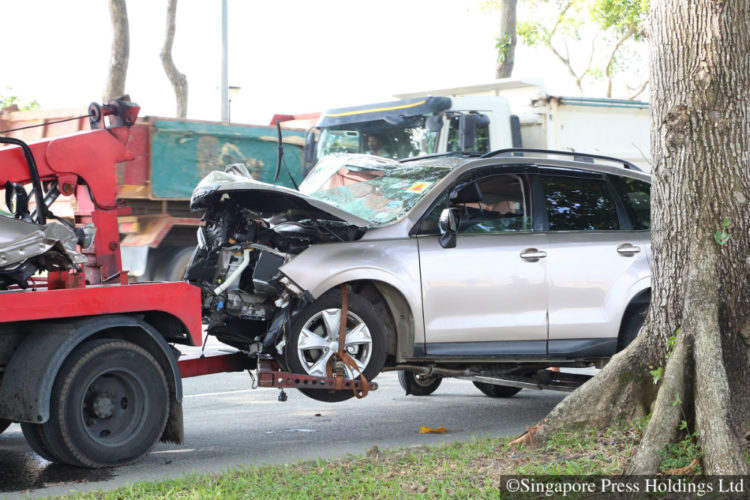 The damaged SUV being towed away. The driver died while the five passengers, who were asleep at the time of impact, suffered injuries of varying severity.

A full-time national serviceman who apparently had not slept for at least 24 hours was behind the wheel of a five-seater sports utility vehicle (SUV) when it veered to the right and smashed head-on into a tree along Changi Coast Road, a coroner’s court heard.

Mr Yukio Matsuo, 21, was pronounced dead at the scene at 7.23am on July 29 last year, after he was extricated from the severely damaged vehicle. His five passengers, all regulars from the Republic of Singapore Navy, were asleep at the time of impact and suffered injuries of varying severity.

At an inquest into Mr Matsuo’s death yesterday, the court heard he had played games and mahjong, as well as chatted with his navy mates at Aloha chalet, before heading for breakfast at around 5am.

Mr Matsuo had told his father he would not be returning home after his day of work at Changi Naval Base. He said he would be attending a gathering at a chalet, and would be reporting back to camp directly.

State Coroner Marvin Bay said Mr Matsuo had stayed up the entire night after work to chat, as well as play cards and mahjong, with his fellow servicemen.

He said fatigue from inadequate rest likely compromised his ability to operate the car safely. The SUV had veered to the right while travelling on a straight road, and hit the tree.

Given that all five passengers had engaged in the same activities the night before, had fallen asleep and were oblivious about the cause of the crash, it would be reasonable to expect Mr Matsuo might be similarly fatigued from inadequate rest, the coroner said.

Finding his death to be an “unfortunate traffic misadventure”, he said this case amply demonstrates the profound dangers of driving while sleep-deprived. The sad circumstances of Mr Matsuo’s demise are a stark lesson on the catastrophic consequences that can ensue from sleep deprivation to the driver, as well as his passengers, he added.