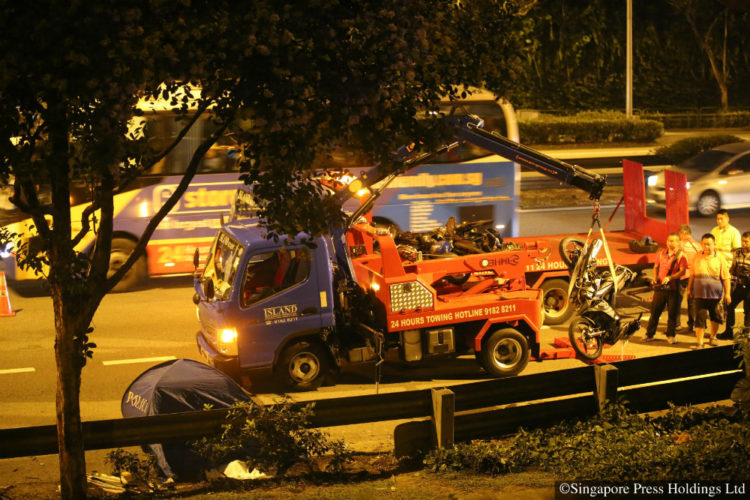 The sky was overcast, so plumber Lau Kam Pong, 53, pulled over on the road shoulder on the Bukit Timah Expressway (BKE) last Saturday, along with several other motorcyclists, to put on a raincoat.

An instant later, he was lying on the ground in pain. “It came from behind. I didn’t see what happened. I didn’t even know if I was hit by a motorbike or a car,” Mr Lau, who broke his left leg and hurt his right shoulder, told The Straits Times yesterday at Khoo Teck Puat Hospital.

Mr Lau, who was on his way home to Johor Baru, was one of six Malaysian men hurt when a van drove into the motorcyclists sheltering under a flyover on the BKE, after the Seletar Expressway exit.

The accident killed two other Malaysian men – Mr Loke Whay Nam, 50, and Mr Lim Chun Hong, 34. Yesterday, their family members were at the mortuary to identify their bodies.

The Singaporean van driver Koh Boon Ping, 25, has been arrested for a rash act causing death.

Recalling the accident, which took place at around 3.50pm, Mr Lau said: “I was still awake (after the crash). People around me kept talking to me to ensure I didn’t lose consciousness.”

The Straits Times understands that he and another of the victims, Mr Lau Kam Long, also 53, were to undergo surgery yesterday. The two men are unrelated.

“I told my family not to come to see me, because my children are still schooling,” said Mr Lau the plumber, who has two children aged 17 and 18. The sole breadwinner has been commuting to Singapore for work for more than 20 years.

Mr Lau, who had hopes of sending his children to Singapore for their tertiary education, said that he now worries about the cost, as he might not be able to work for half a year.

His operation alone is expected to come up to $14,000, said his sister-in-law, who was at the hospital with his elder brother yesterday morning. She declined to be named.

Singapore Road Safety Council chairman Bernard Tay said that to avoid such accidents, motorists should not expose themselves along the road, even if there is a shelter. He added: “If it is along a stretch where vehicles are moving, there are not many precautions that you can take.”