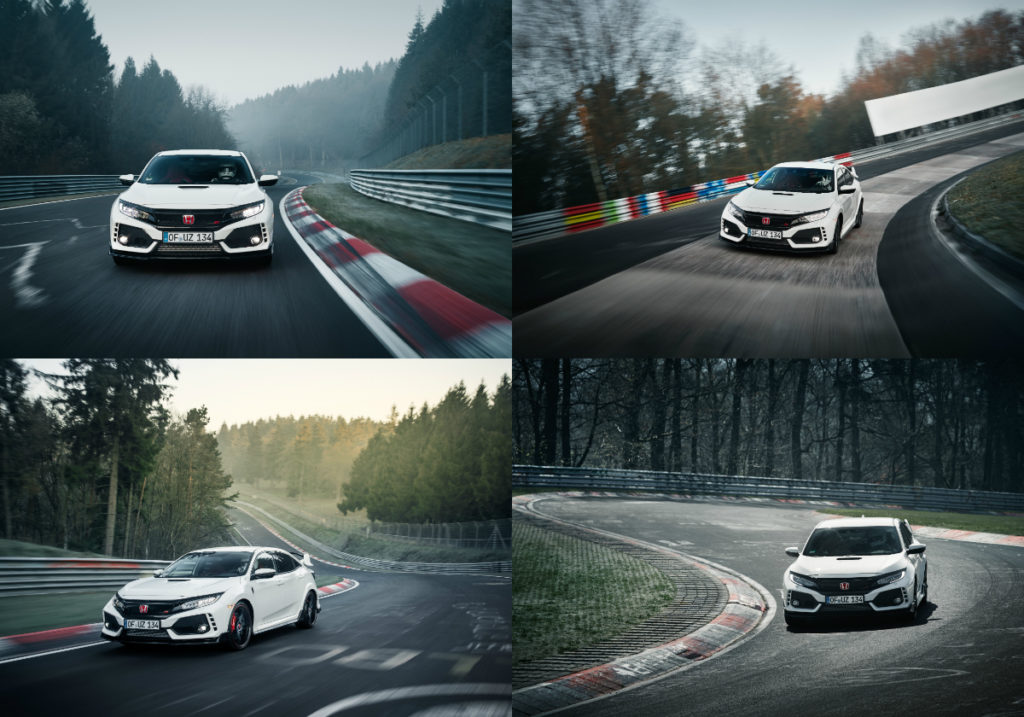 Following the production model’s debut at the 2017 Geneva Motor Show, the all-new Honda Civic Type R has set a new benchmark lap time for front-wheel-drive cars at the Nürburgring Nordschleife. On 3 April 2017, a development car lapped the world-famous circuit in 7 minutes 43.8 seconds.

The lap time was achieved during the final phase of the model’s testing regime, on a dry track with an optimum ambient temperature for the best tyre and powertrain performance. The new time represents an improvement of nearly seven seconds compared to the model’s predecessor.

The new Civic Type R was part of the all-new 10th-generation Civic’s development programme – the largest in Honda’s history – and was engineered to deliver the most rewarding drive in the hot-hatch segment, both on road and on the racetrack.

Several factors contributed to the new Civic Type R’s new benchmark lap time at the Nordschleife. At its heart is the optimised and refined 2-litre VTEC Turbo engine, producing 320bhp of power and 400Nm of torque. New lower gear ratios in the 6-speed manual transmission further improve the car’s acceleration, while the new comprehensive aerodynamic package delivers outstanding high-speed stability, with a best-in-class balance between lift and drag.

The high-rigidity body frame of the all-new Civic Type R is 16kg lighter than the previous model’s, with a torsional stiffness improvement of 38%, which provides significant benefits to steering response and cornering stability. New multi-link rear suspension enhances stability under braking and reduces the total roll movement of the car, enabling later braking into corners and helping to achieve higher cornering speeds during the lap.

The development car that achieved the lap time was technically representative of production specification. A full floating roll cage was installed for safety reasons, but its presence did not provide any additional rigidity to the body frame. The extra weight of the cage was compensated for by the temporary removal of the infotainment system and rear seats. The car was using road-legal, track-focused tyres.

Ryuichi Kijima, Honda’s lead chassis engineer for the Civic Type R, explains where the new model shows the most significant improvements around the Nürburgring compared to the previous model.

“The cornering speed achieved in the new Type R is higher because the car features a wider track and tyres, a longer wheelbase, new multi-link suspension in the rear and optimised aerodynamics that improves stability, ” said Kijima-san. “For example, drivers typically enter the corner after Metzgesfeld at around 150km/h. Even at this medium-speed corner, the speed is around 10km/h higher due to the new Type R’s excellent stability. So, with improved cornering performance, we can increase the speed throughout the lap, helping the new Type R to achieve a much quicker lap time.”

Read our review of the 10th-generation Honda Civic 1.6.