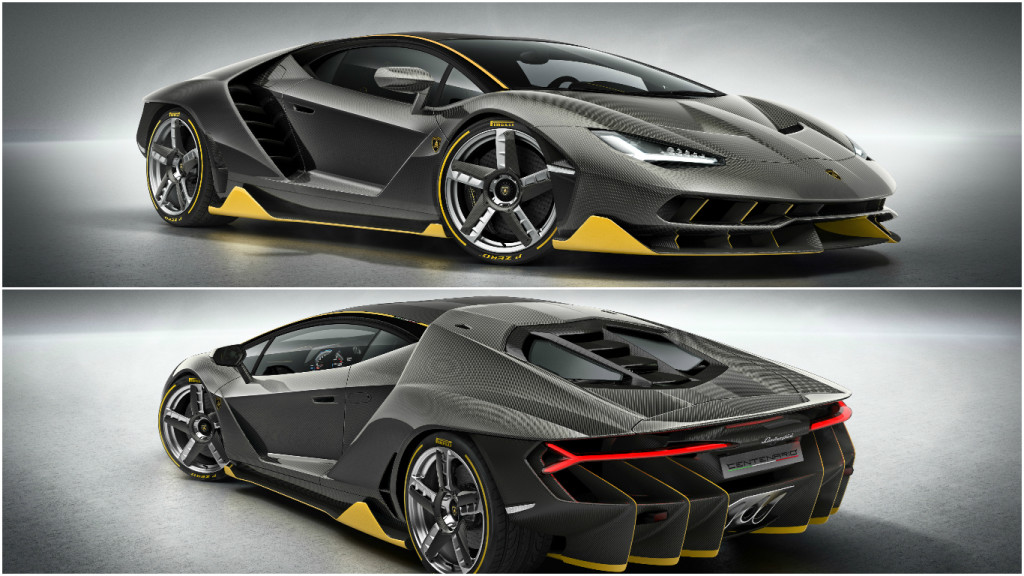 Automobili Lamborghini presented the Centenario at the 2016 Geneva Motor Show, in the year the company celebrates the centenary of founder Ferruccio Lamborghini’s birth. Only 20 coupé and 20 roadster versions of the Centenario will be produced from 2016 through 2017, and all 40 cars have already been sold, at a start price of 1.75 million euros plus tax.

The Centenario continues Lamborghini’s one-off strategy and demonstrates Lamborghini’s innovative design and engineering competencies. Using the V12 architecture (whose history is really special), the Centenario’s naturally aspirated engine produces 770bhp and powers from zero to 100km/h in 2.8 seconds, and from zero to 30 km/h in 23.5 seconds, with a top speed in excess of 350km/h. Braking from 100km/h to standstill is achieved in 30 metres. A monocoque and body in full carbon fiber provide a low weight of 1520kg and a power-to-weight ratio of 506.5bhp per tonne.

The Centenario’s pure and essential lines are evident in a new design language throughout, demonstrating the quintessence of Lamborghini’s commitment to “form follows function”. The supercar has a certain permeability, defined by the intakes, outlets and ducts that mark its aerodynamic superiority.

The Centenario takes Lamborghini’s V12 engine as its powerplant, perfectly matching the dynamic potential of the car. The highly responsive engine, even at low revs, provides the unmistakeable resonance and characteristics that only a naturally aspirated engine can. Uprated to provide an output of 770bhp and with the rev limiter raised from 8350rpm to 8600rpm, the Centenario’s V12 is the most powerful engine produced by Lamborghini to date.

The body of the Centenario is built entirely in carbon fibre, with a monocoque and all other body parts and trims in carbon fiber. The car has achieved a torsional stiffness of 35,000Nm per degree.

The luxurious interior (pictured below) can be finished to each Centenario client’s specification. Sports seats in lightweight carbon fibre are included, with new stitching that features on the length of the dashboard, steering wheel, sunvisors, rocker covers, and the new inner door panels made of carbon fibre and Alcantara.

The infotainment system includes a sophisticated telemetry function: the Centenario provides ultimate performance, both on road and, should an owner wish, on track, as evidenced by space for two helmets in the front trunk. The sophisticated telemetry allows speeds, times, lateral and g-forces to be recorded and even compared between different occasions and different drivers. Two optional interior cameras allow the drivers’ experiences to be recorded.

The Centenario continues Lamborghini’s strategy of producing one-off cars and exclusive editions, which allow scope for exploring design and technology possibilities while heightening brand awareness. Starting with the Reventón and including the Sesto Elemento, Aventador J and Veneno, every Lambo limited edition has proved its instant appeal, achieved iconic status and increased in value. 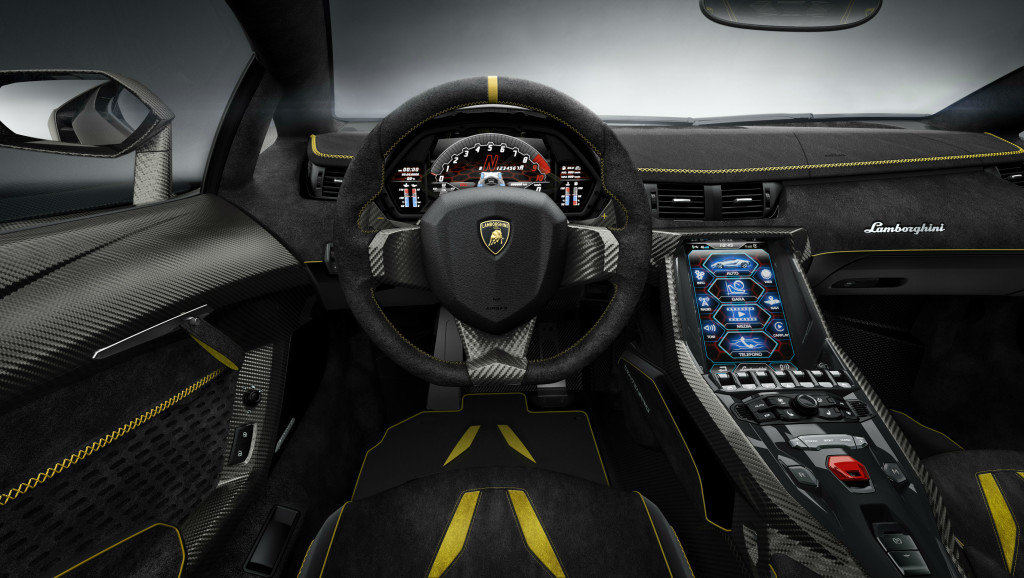