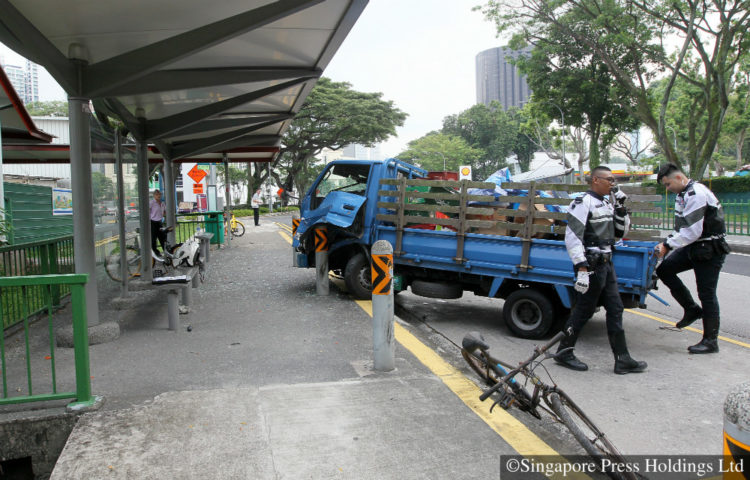 The accident happened along Ganges Avenue, towards Zion Road, on Dec 27, 2017. The 70-year-old driver was conscious when he was taken to the Singapore General Hospital.

A police spokesman said that they were alerted to the accident along Ganges Avenue towards Zion Road at around 3.20pm.

The driver was conscious when taken to the Singapore General Hospital, the spokesman said.

The Straits Times understands that he suffered cuts to his forehead.

The Singapore Civil Defence Force said that the hospital was alerted to be on standby to receive him.

A 35-year-old construction worker, who wanted to be known only as Michael, told Chinese-language newspaper Shin Min Daily News that he heard a deafening crash before rushing out of his worksite to take a look.

“There was a man and a woman waiting for the bus at the time. Fortunately, the lorry crashed into a bollard at the bus stop and they were able to escape unhurt,” he said.

He added that most of the items on the lorry were not damaged, except for a bicycle that had fallen off the vehicle.

Following the accident, commuters had to alight about 15m away from the bus stop, as there were glass shards on the road, Shin Min reported.