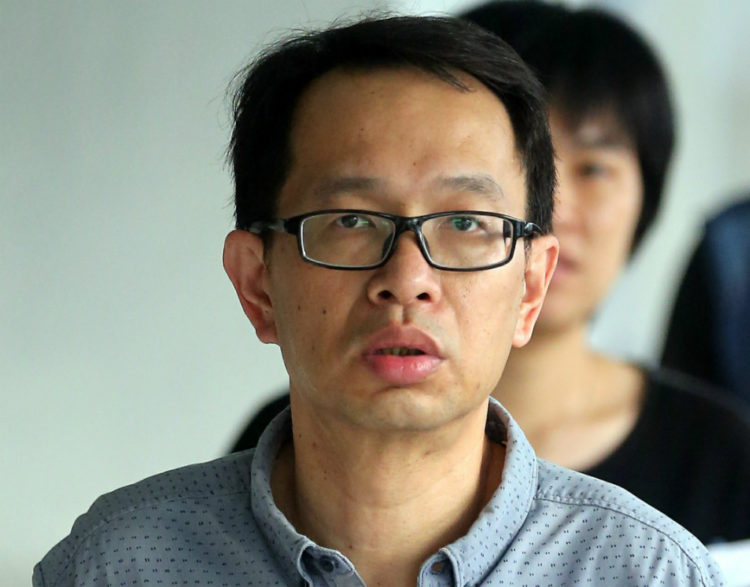 Edward Loh Teik Khoon had rammed his car into the back of another car. When the driver tried to prevent him from leaving, Loh drove forward, causing the victim to jump onto the bonnet.

A businessman tried to leave after a traffic accident in Old Airport Road, and drove rashly when a motorist stood in front of his car to prevent him from leaving.

Edward Loh Teik Khoon drove his car forward, causing the victim to jump onto the bonnet of his car. He continued driving in a zigzag manner for 100m to 200m while the victim was still on his bonnet, a court heard.

Yesterday, Loh, 49, was jailed for eight weeks, fined $600 and banned from driving for two years on four charges.

He had claimed trial to three of the charges – driving so rashly as to be likely to cause hurt to Mr Edwin Heng Yong Mong, 52; failing to render assistance after injury was caused to Mr Heng; and failing to stop after the accident in 2014.

He was convicted by District Judge Ong Chin Rhu on Oct 30 after a seven-day trial.

Loh had pleaded guilty to driving without due care and attention by failing to keep a proper lookout ahead, thus hitting Mr Heng’s car.

Assistant Public Prosecutor Andrew Low said Mr Heng and another motorist, Mr Poh Chin Aik, 42, were driving along Old Airport Road towards Joo Chiat Road sometime before 8.20pm on June 2, 2014, when they stopped at the traffic lights near the Dunman Road junction.

Suddenly, Loh’s car rammed into the back of Mr Heng’s vehicle, causing it to surge forward and hit Mr Poh’s car. The impact threw Mr Heng forward against his seat belt before he recoiled and hit his headrest. He was disorientated, had pain at the back of his head and difficulty breathing.

Mr Poh, whose spectacles fell off, suffered numbness in his right hand. His wife, who was in the front seat, suffered chest pains. Both Mr Heng and Mr Poh’s wife were given three days of medical leave.

When Loh tried to drive away, Mr Heng stood in front of his car to stop him. Loh claimed to have had just a can of beer before the accident. He denied driving rashly.

Convicting him last month, Judge Ong said she did not find his evidence or explanations for his manner of driving convincing.

She said his manner of driving gave the distinct impression that Loh was trying to throw Mr Heng off his bonnet.

Loh, represented by Mr T. M. Sinnadurai, could have been jailed for up to one year and/or fined up to $5000 for rash driving likely to cause hurt to any person. The maximum penalty for driving without due care and attention is a $1000 fine and six months’ jail.

For failing to render help and failing to stop, Loh could have been fined up to $1000 or jailed for up to three months on each charge.