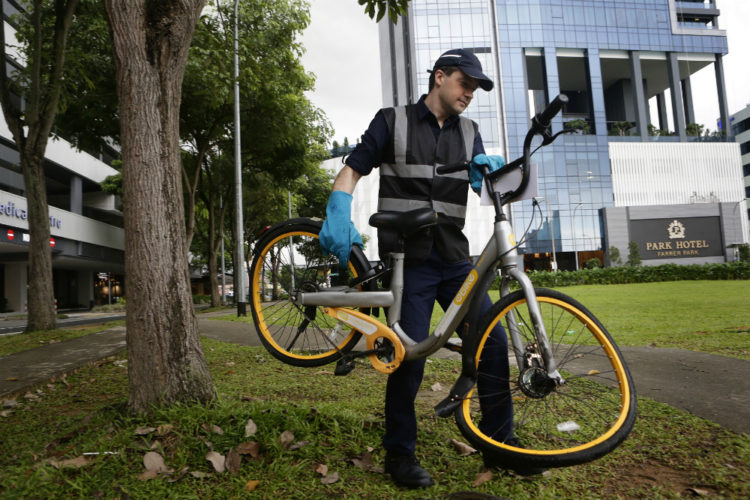 Mr Zhivko Girginov picking up a damaged oBike on one of his “raids”, where he collects such damaged share bikes and deposits them in a public space so operators can pick them up.

Since shared bicycles began rolling out here earlier this year, both operators and the authorities have taken steps to ensure bikes are not abused or parked indiscriminately.

One user has taken it upon himself to help them clear the streets of damaged bikes.

Mr Zhivko Girginov, a Bulgarian who has been living here for nine years, said he did not want to just complain about bicycles cluttering up public spaces but to do something about it.

Since September, he has conducted three “raids”, using a rented lorry to collect damaged two-wheelers and deposit them in a public space where the bike operators can pick them up later.

The 42-year-old piano teacher receives no payment for his “work” and said he does so out of a sense of civic duty to help keep his adopted country “orderly”.

“My brother is a police officer, so maybe it’s in my blood to do this service to the community,” he told The Straits Times.

As there are already policies in place to monitor and regulate indiscriminately parked bikes, Mr Girginov focuses on damaged bikes which he said could pose a threat to the safety of users.

When The Straits Times accompanied him on one of his rounds on Tuesday (Dec 12), Mr Girginov picked up seven damaged bikes within an hour, all a short drive away from his home in Dorset Road. Damage seen on the bikes collected included broken chains and broken pedals.

One particularly badly damaged bike, found near the Farrer Park MRT station, appeared to have been hit by a vehicle, with its front wheel bent beyond repair.

Mr Girginov said it was obvious some of the bikes were vandalised but, in many cases, it was simply wear and tear from months of regular use and exposure to the elements.

He believes the difficulty of reporting damaged bicycles – which requires users to take a photo of the bike and report details such as the damage and its exact location – may be discouraging more users from reporting them.

While the cost of a day’s rental of a lorry, including fuel, is about $200, Mr Girginov said money was not an issue. However, the challenges he faced included finding safe and legal locations to park his lorry while he goes to collect the broken bikes, and sometimes having to drag them several hundred metres to where he parked. One oBike can easily weigh more than 10kg.

“Lifting the bikes on to the lorry can be very tiring,” he said, adding that he has taken to wearing gloves to protect his hands on his rounds.

“I’m a piano teacher, so I have to take care of my hands.”

He added that oBike’s trial engagement with Mr Girginov’s efforts – which he said “spreads the message of civic-mindedness and responsibility” – was part of this vision.

Mobike Singapore country manager Sharon Meng said the firm was in touch with Mr Girginov to “build an even stronger bike-sharing environment” here.

“We’re committed to collaborating with local communities that share our focus on building a healthy bike-sharing environment to foster a positive and enjoyable bike-sharing experience for all.”

Though an online meeting group created by Mr Girginov – dubbed the Volunteer Bike Patrol – has about 50 members, he has so far conducted his rounds single-handedly, only once getting the help of a volunteer for a couple of hours.

He hopes more will join him in the future.

“I could use an extra pair of eyes to help me.” 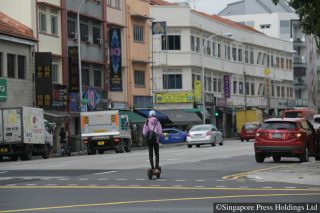 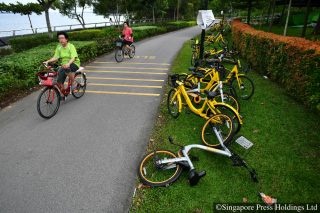 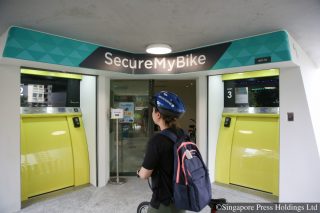 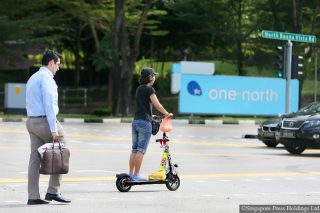