Could this be Mazda's first electric vehicle? | Torque
Loading posts... 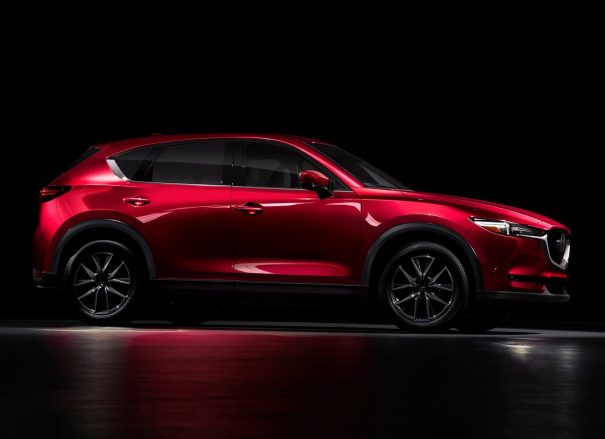 The new Mazda electric vehicle takes many styling cues from the CX-5 crossover.

Ahead of its purported launch in 2020, Mazda’s first-ever all-electric vehicle has been spied testing.

Pictures of the car were sent in by a reader to specialist EV website Electrek.

Externally, the car looks very much like a CX-5, one of Mazda’s most popular models.

It was spied testing in Norway, presumably to understand how the electric drivetrain stands up in cold weather.

Although the prototype was sheathed in black camouflage, it’s unmistakably a Mazda.

The Mazda electric vehicle appears to take styling cues from models like the CX-5 and the new Mazda 3, like the grille and the rear three-quarter panel.

In addition, its size appears to fall somewhere between the CX-5 and CX-3, which could open it up to many buyers who are keen on such a compact size.

However, these are spy shots, so take them with a pinch of salt until we see the final product.

What’s not in doubt is that Mazda is pretty late to the EV game.

However, it’s ramping up efforts to begin producing all-electric vehicles.

That’s because across its fleet, Mazda needs to lower its average CO2 emissions before tough European emissions regulations come into force in 2021.

Part of their efforts to reduce emissions includes the new Skyactiv-X engine which uses spark-controlled compression ignition (SPCCI), said to squeeze every last bit of power from every drop of fuel.

Mazda chief executive Akira Marumoto said the Skyactiv-X engine (and its more advanced spawn) will power many of their models in the next decade.

To reach even stricter standards coming in 2025 and 2030, Mazda will be jointly developing a new EV architecture with Toyota, Marumoto-san confirmed in an interview with Automotive News.

However, he added that it will first introduce its own EV on a Mazda architecture in 2020.

That could be the Mazda electric vehicle which was spied testing.

In the same interview, Marumoto-san also confirmed that by 2030, all Mazdas will have some form of electrification, including their diesel models.

It’s an interesting time for Mazda – they’re one of the few automakers consistently pushing the boundaries of style and engineering.

When that Mazda electric vehicle breaks cover, we’re sure that it won’t differ too much from their current offerings.