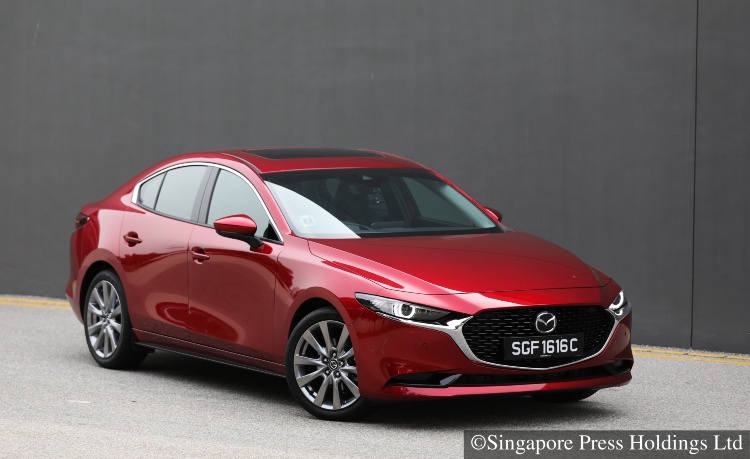 Hopping from the old Mazda 3 into the new one is like getting into a Lexus IS after driving a Toyota Corolla.

No offence to the Corolla or preceding Mazda 3 – both are fine cars in their own right – but the improvement in the new Mazda 3 is quite startling.

And even if you do not compare it with its predecessor, the new 3 is good enough to be ranked alongside premium cars such as the Audi A3, the BMW 2 Series and the Mercedes-Benz A-Class.

In terms of design, refinement, equipment level and bang for buck, the Mazda 3 is at least half a notch above the German trio.

As for ride and handling, it puts its Japanese rivals in the shade.

The range-topping Astina variant (named after Mazda’s popular model of the 1990s) is a sleek piece of engineering inside and out.

Mazda has dispensed with fussy character lines and made the body so clean it looks like liquid metal. It is appreciably longer now, accentuating its wind-swept silhouette.

Hatchbacks usually look sportier, but in this case, it is the Mazda 3 Sedan which sets your pulse racing.

Its interior is as obsessively neat, with essentials housed in a thin fascia which conveys simplicity.

An infotainment tablet sits atop a layered dash – sized for legibility, not boasting rights.

A centre console is similarly uncluttered, with controls which are either flushed or low-profile. The car’s three-spoke steering wheel will not look out of place in a sporty coupe.

Most impressively, everything works with a level of tactility unmatched by the Mazda’s peers. Even the BMW Z4 roadster tested here falls short.

It is equally amazing that a car with so many features can come across as minimalist as this.

At no point do you feel you are overwhelmed by technology – which is a good thing when carmakers seem to be trying to outdo one another in the area of on-board gizmos.

They try so hard, sometimes you think they are compensating for a lacklustre drive. 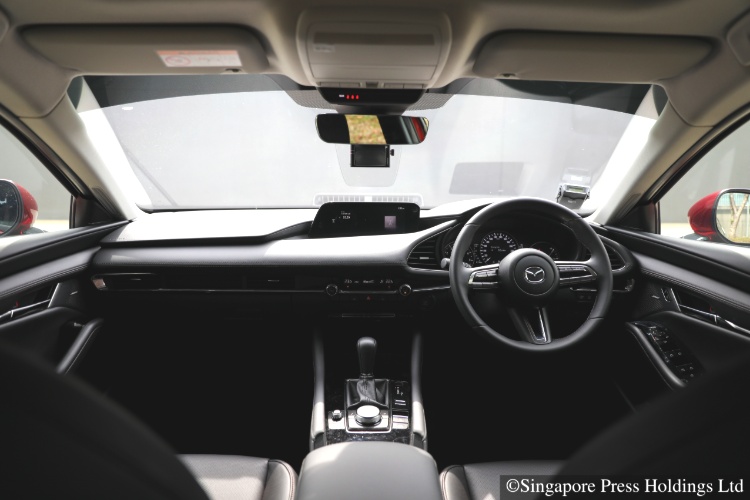 Not so the Mazda 3 Sedan. It drives well. While the specs sheet says nothing much has changed from the time its predecessor was launched five years ago, the car says otherwise.

It is so smooth and responsive that you think it is powered by a fanciful multi-cylinder with a displacement of at least 2 litres.

But beneath its bonnet is a 1.5-litre naturally aspirated engine making merely 120hp and 153Nm.

It revs creamily, with as little effort as a turbo and no hint of harshness even at 4000rpm.

The fact that this engine has an unusually high compression ratio (14:1) makes its refinement all the more astounding.

The car has a “mild hybrid” system which recovers energy lost in braking and deceleration and storing it in a small lithium-ion battery.

This converted electrical energy is then used to power on-board equipment, as well as to help the car overcome inertia from standstill.

It does not, however, assist in driving the front wheels.

Compared with its predecessor, the new Mazda 3 Sedan is a tad slower in the 0 to 100km/h sprint, but slightly more frugal with fuel. Neither of which, however, is apparent.

But even without this, the Mazda 3 Sedan outshines its rivals.

The Astina variant has features which even some luxury models do not always have, including adaptive cruise control, 360-degree reverse camera, road-sign recognition, lane-keeping assist and head-up display.

Front-cross alert (this helps when you are merging and your view of oncoming traffic is blocked) and two driver attention alerts (one monitors driving behaviour and the other tracks eye movement).

In short, the Mazda 3 is possibly the best compact family sedan today – even when compared with some cars beyond its price range.